On the way to Kodachrome

I've been, um, chastised for not posting more often. Because I was raised Catholic, I feel guilty and hang my head in shame. I keep saying that there aren't enough hours in the day, and it's true, but it actually couldn't make me happier. I remember times when the days dragged on and on, nothing of any interest to me at all, my spirit bled dry, so to have come back to life and find everything interesting again is a welcome situation.

We had the most magnificent thunderstorm last night - lightning flashing simultaneously all around, immediate explosive thunder - the granny of all thunderstorms. It was great! I wish I could have been out to see it but that would have been pretty stupid. When I was at Petrified Forest I had a wide open view of anything coming from the north or east and some of the west, so I could watch the monsoons roll in, but I'm in a forest now with not much of a view other than trees.

But on with today's show. A couple of weekends ago HH and I went to Kodachrome Basin State Park in Utah. It was another place circled by my friend Richard on the Indian Country map. Here's the bad part of going anywhere away from the rim. Well, there are a couple of bad parts, including it taking forever to get anywhere, but the worst bad part is no matter where you go, you go through Jacob Lake. Jacob Lake is the intersection of Highway 67, the only way in to the north rim, and Highway 89 - or 89A, I can never remember - that goes up to Kanab and points north and west, or east to Lee's Ferry and on to the south rim and Flagstaff. Jacob Lake is the sticking point because it has a tiny restaurant and a bakery. When I heard bakery I concurrently heard angels singing because I thought I'd be able to get bakery bread, but it's not that kind of bakery. It's a cookie bakery. Just cookies. There's a discount for multiples of four and hasn't that turned out to be the road to hell. If you're going to get four, get a bigger discount by buying eight. What the heck, twelve!! My favorite is the gingersnap, about as big around as a salad plate. HH likes the chocolate chip with pecans. But they also make zucchini lemon, a weird combination that works very well. And lemon sugar, raspberry lemon, German chocolate, oatmeal raisin, a bunch of others, and Richard's favorite, one called parfait that has big chunks of chocolate. Once the bag of cookies is in the car all bets are off. My next door neighbor here, Linda, says she's gone so far as to throw the bag to the back of her SUV but it never works; they're still in the car and resistance is futile.

So we were fortified with sugar and butter as we headed north to Kodachrome Basin. There's a long way around or, alternately, a backcountry cutoff that we bravely took. Part of it is a good gravel road and then it changes to graded dirt, remarkably good, then it deteriorates to a take-your-chances, pitted track that had a dip in it with just feet and feet of mud all the way across it. By the time we got to this we'd gone about 85% of the way and I was not inclined to turn back. (I don't know that it was 85% but we'd gone a long way and so I made that up.) Lucky for us, another vehicle had gone through the mud so we followed its tracks and obviously survived.

The payoff for all this risk-taking was a beautiful back road with interesting geology and lots of wildflowers. 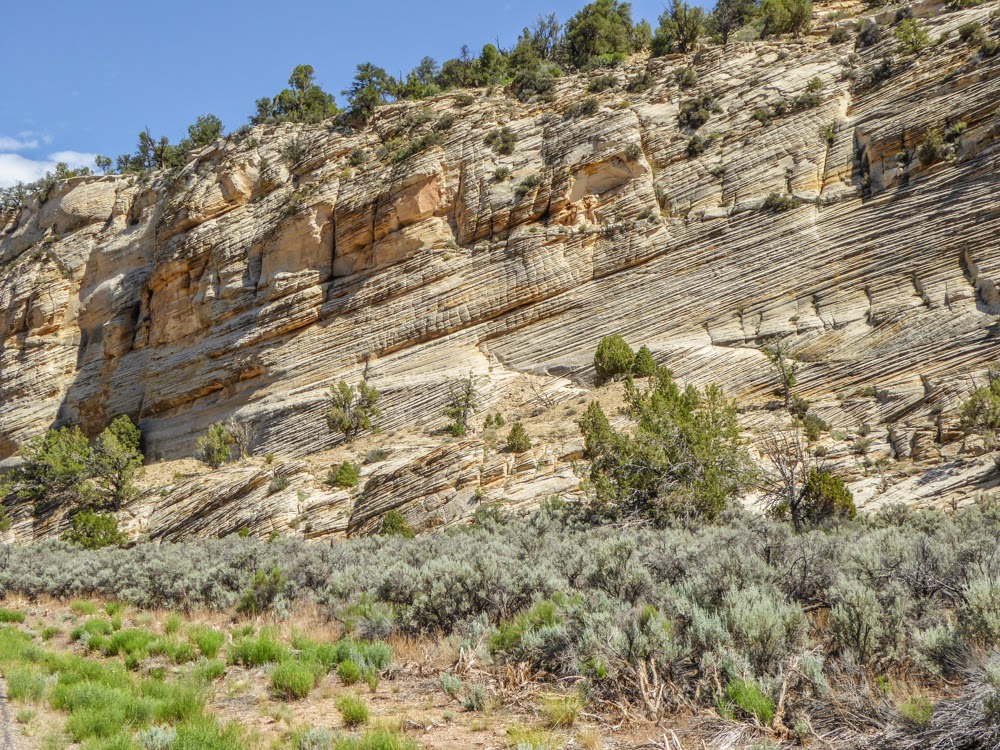 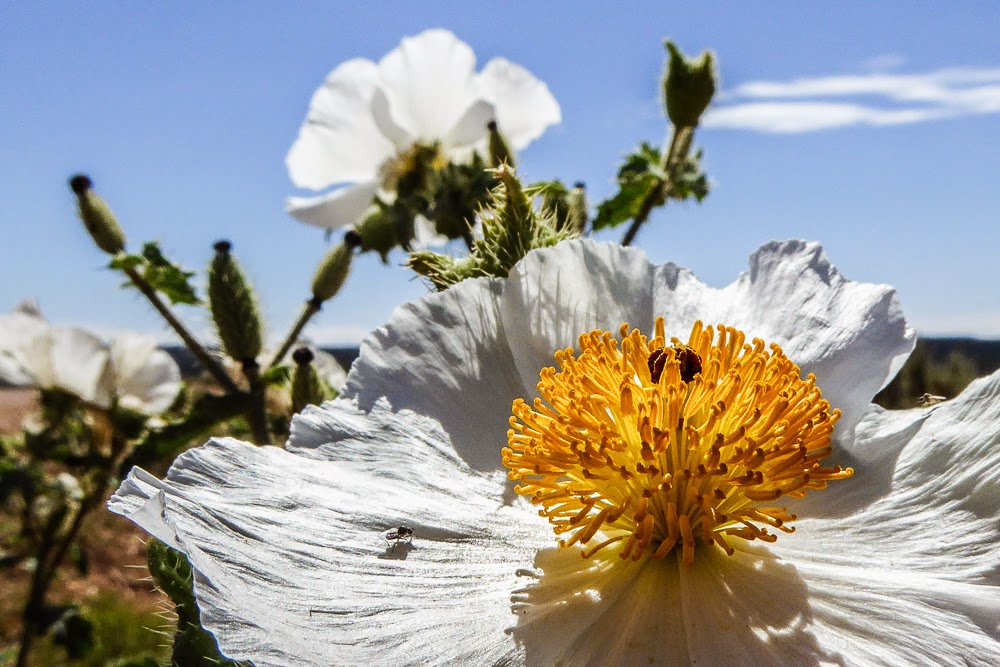 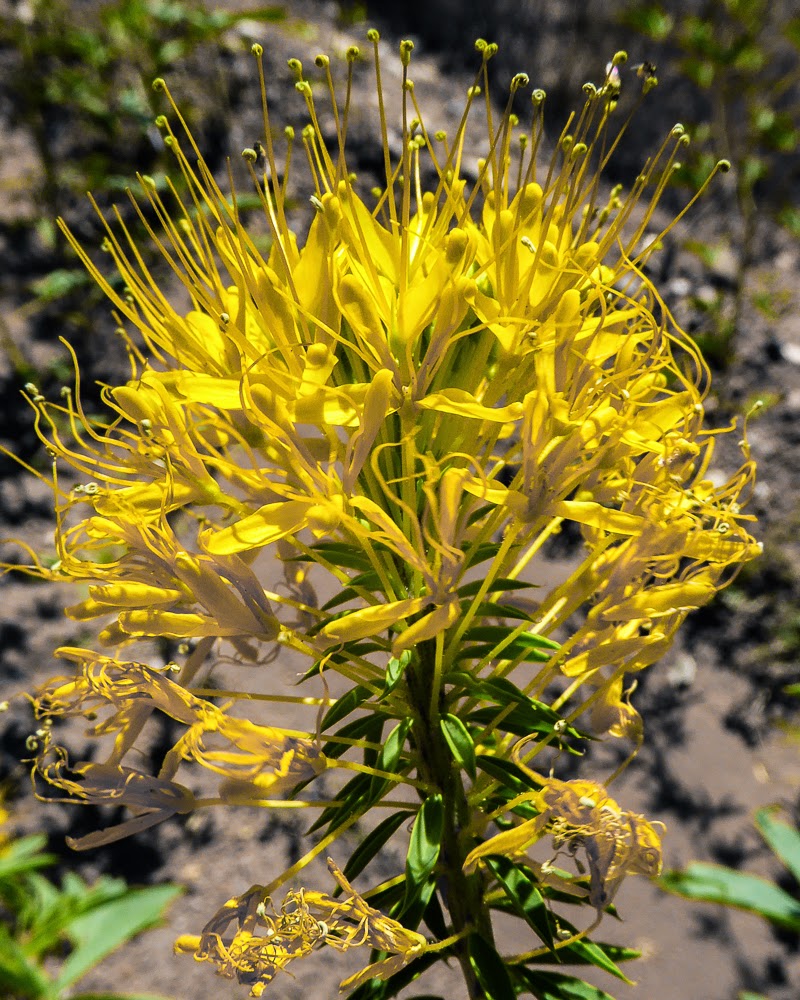 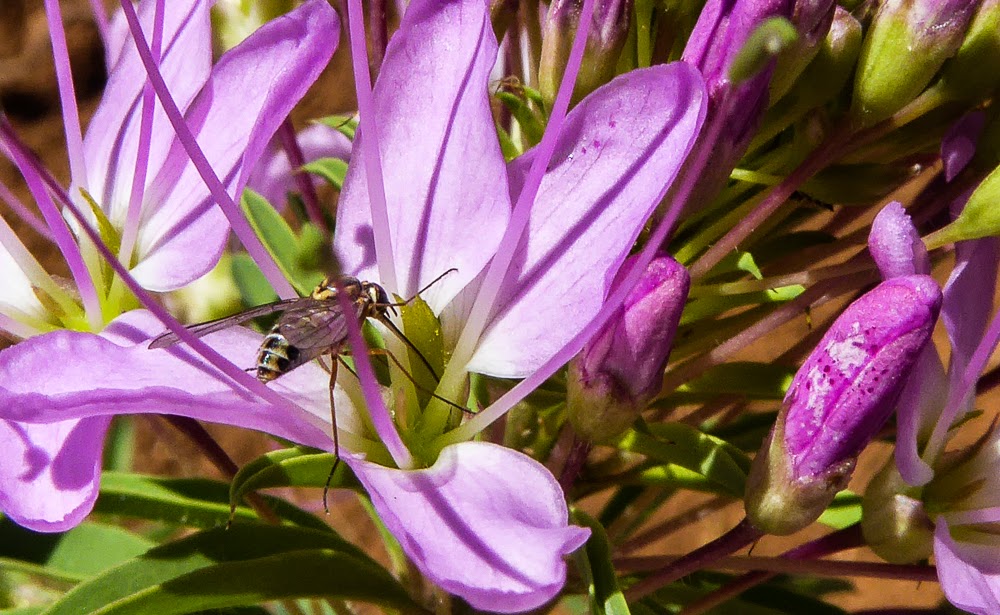 Also, this shimmery grass, soft as fluff, that's a field of white from a distance. 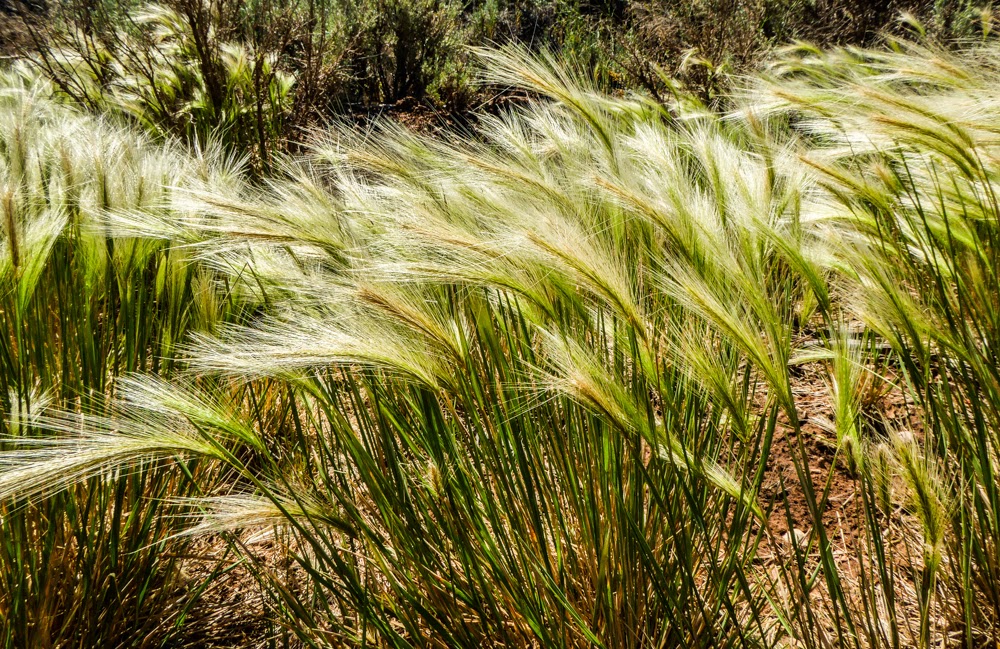 We made it to Kodachrome. According to the park's website, "The color and beauty found here prompted a National Geographic Society expedition to name the area Kodachrome, after the popular color film, in 1948." It reminds me of a mini Monument Valley. 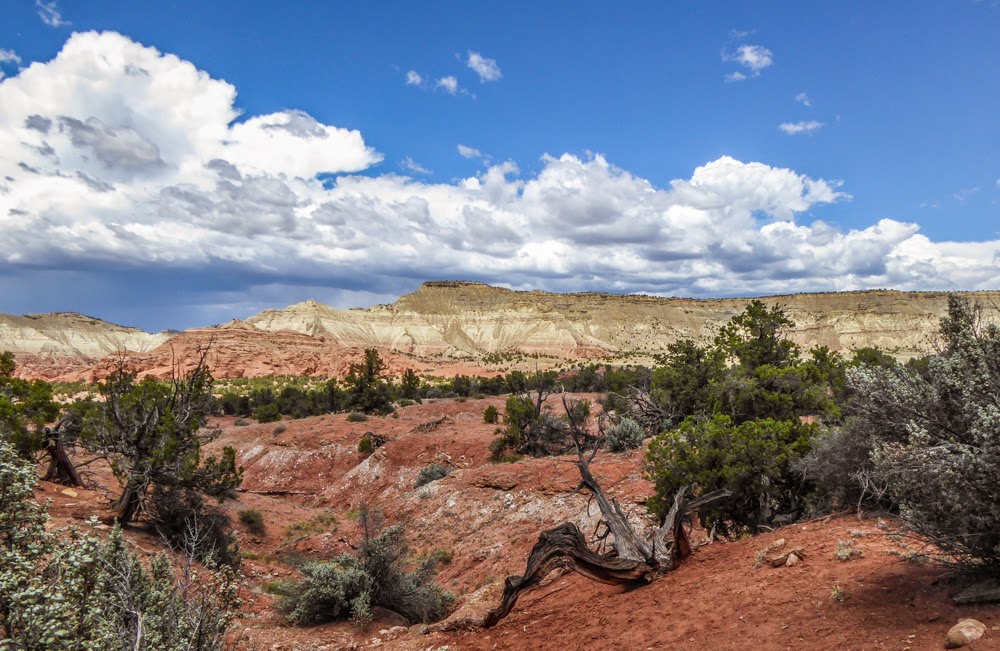 Nice storms moving in but staying at a distance made for photo opportunities. 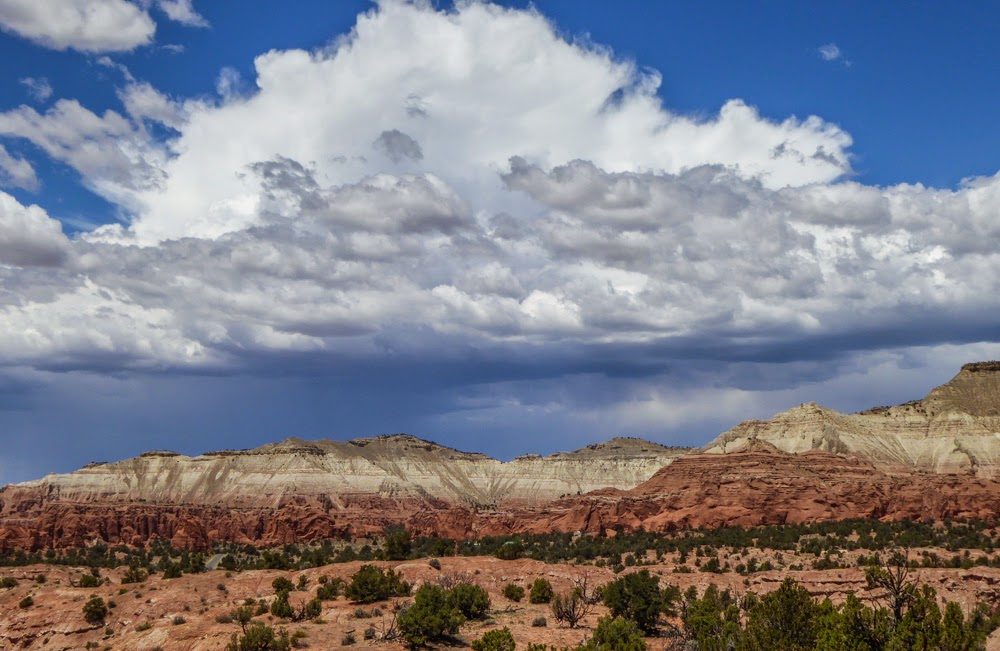 It was blisteringly hot. I don't know what's the matter with me because we leave the house for great adventures and I don't take my hiking gear with me. This has become a habit that's increasingly annoying. I did have my hat and walking poles, but only a bottle of water, not my Camelbak, and sneakers, not my hiking shoes. No SPF shirt. Any long hike was out of the question, but I did take a short jaunt to Shakespeare Arch. I had it in mind to continue the trail on what was described as a strenuous hike over slickrock, but when I saw the actual trail, I slunk my way back to the car. 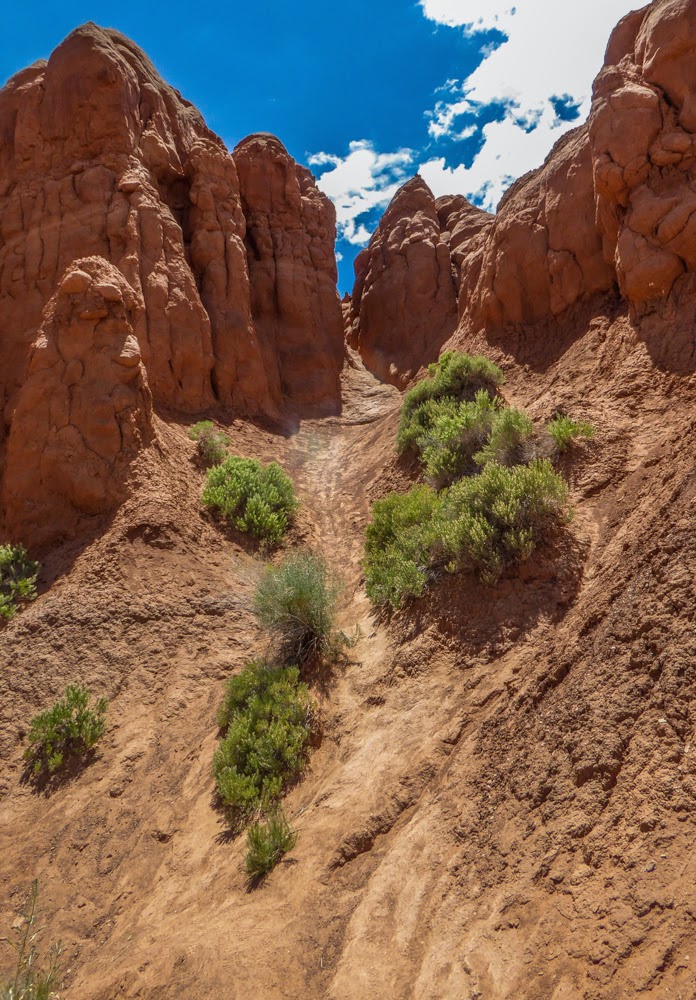 We continued around the park, catching views of the cloud-show the weather was performing - always one of my favorite things about the southwest. 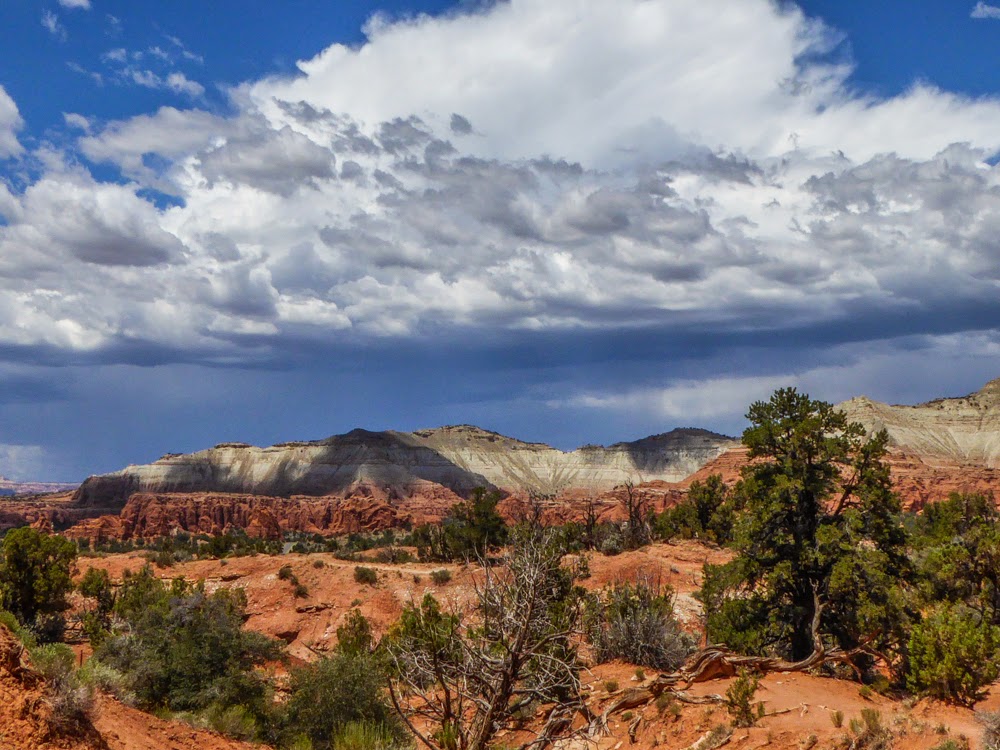 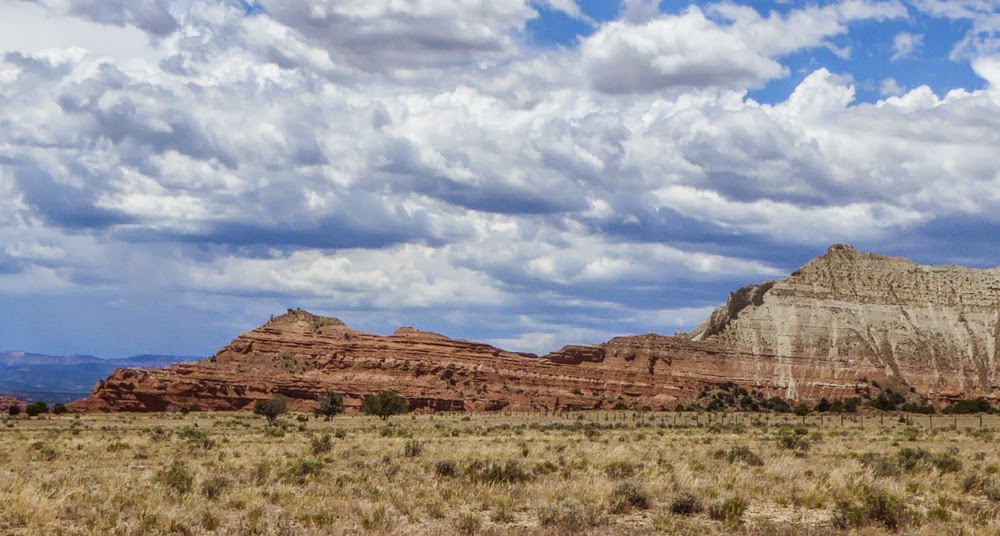 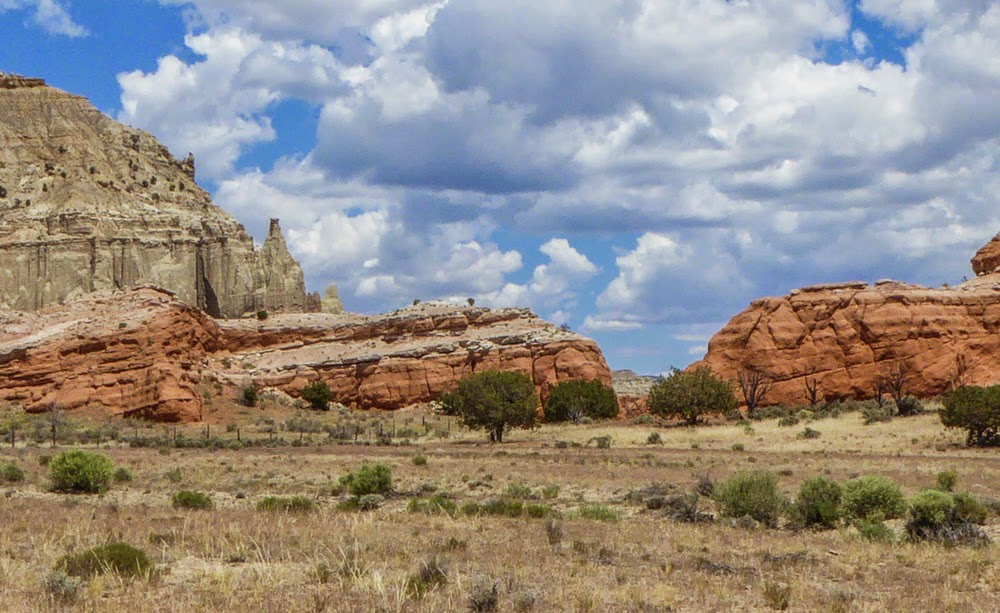 Some of the 67 formations in the park. 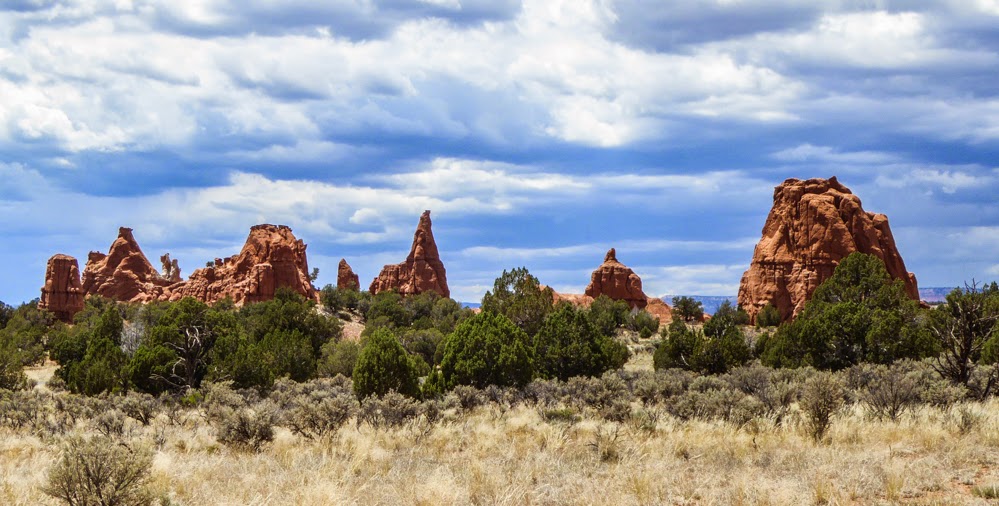 We went on an easy half-mile nature trail that was the best one I've ever been on. It's not that it was all that educational, although if I'd taken the time to read the signs I might have learned something, but the variety of geology around the loop was a nice feature. 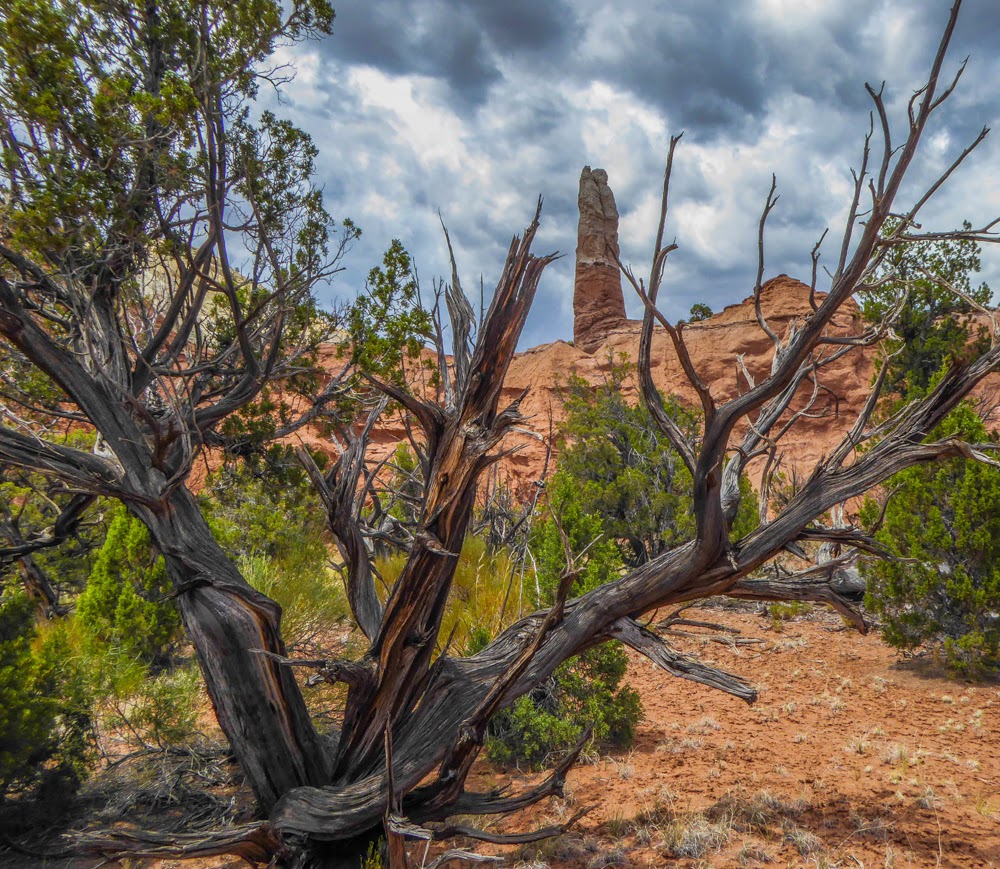 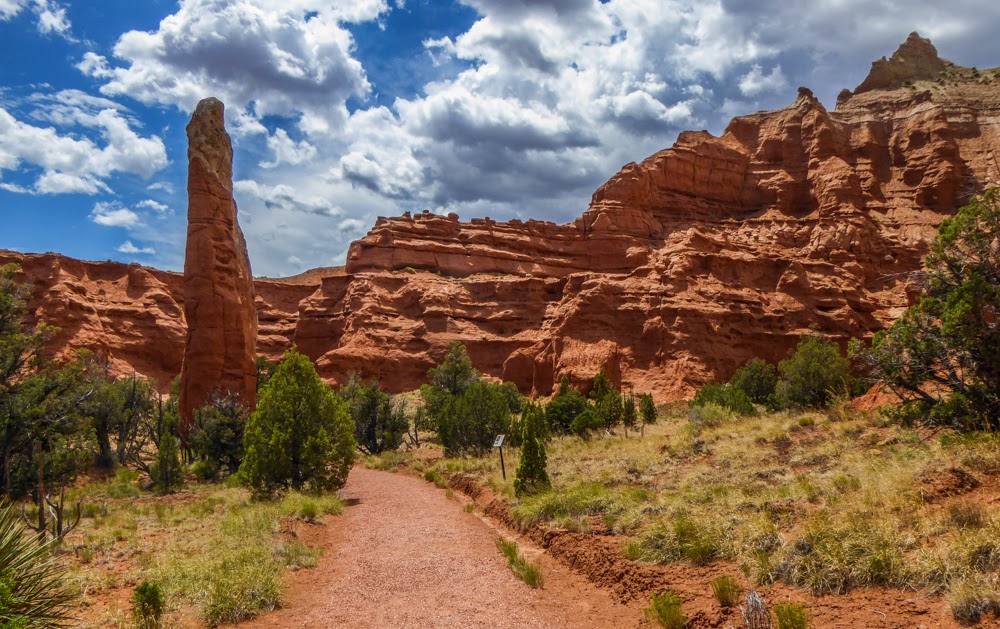 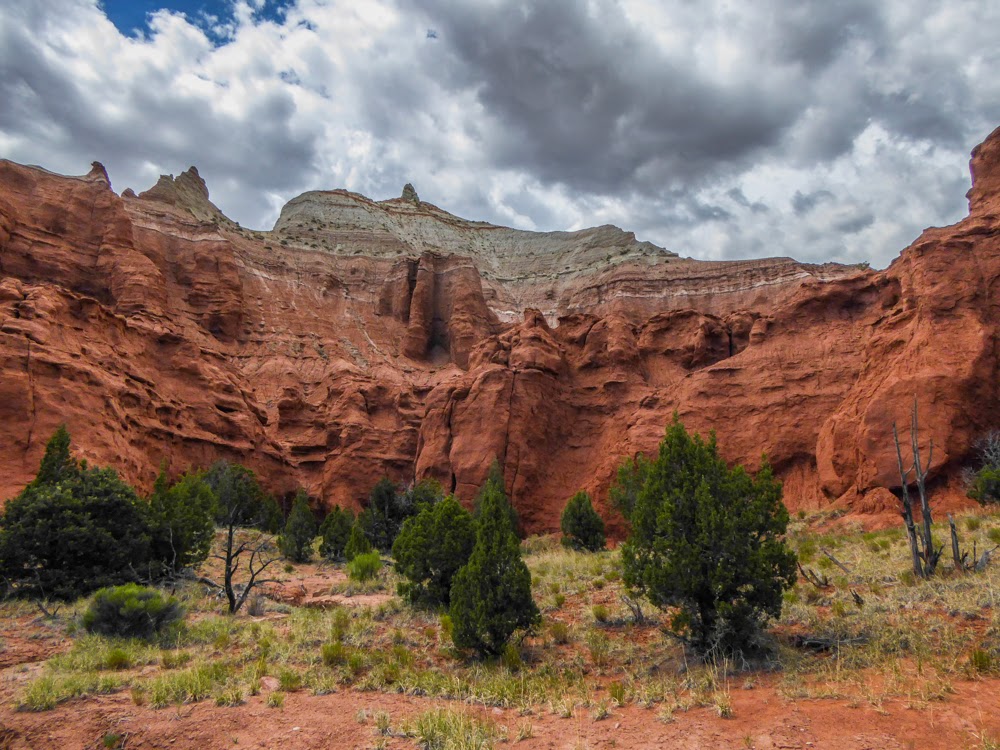 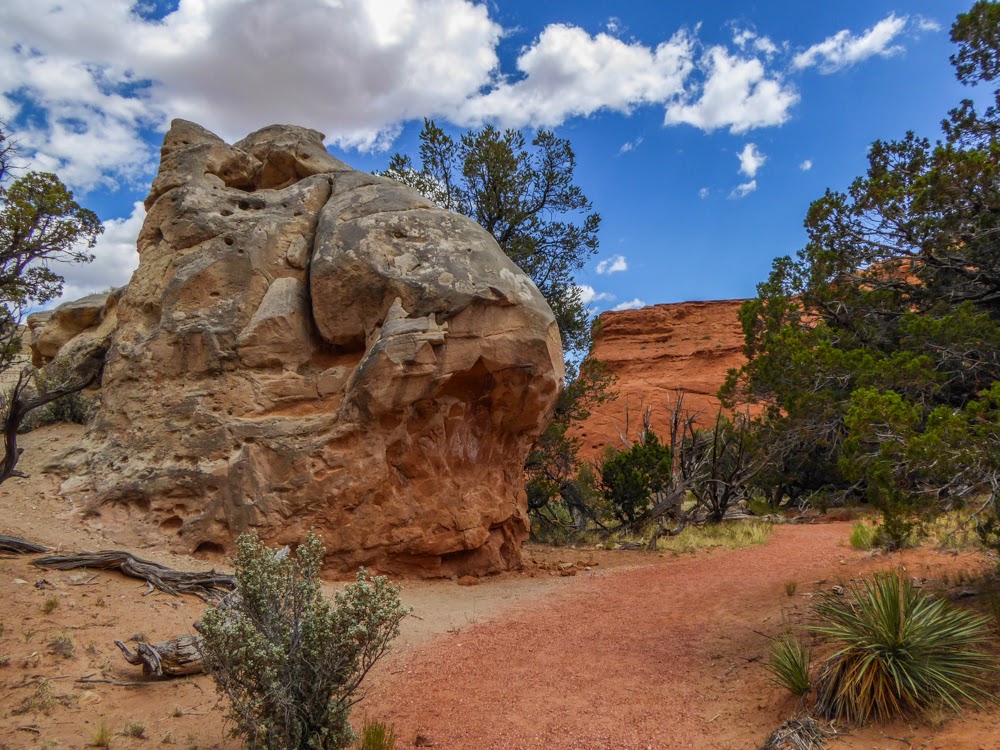 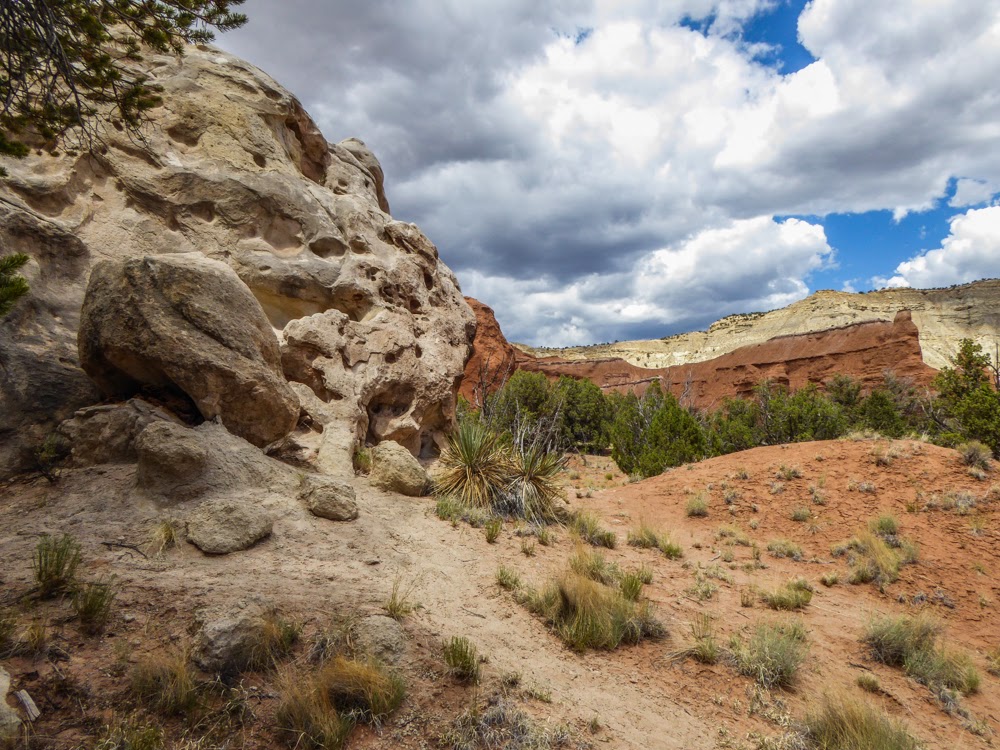 Then there was this lizard that I saw only because it moved. If it had rested there vertical to the tree and not moved I might not have noticed it. 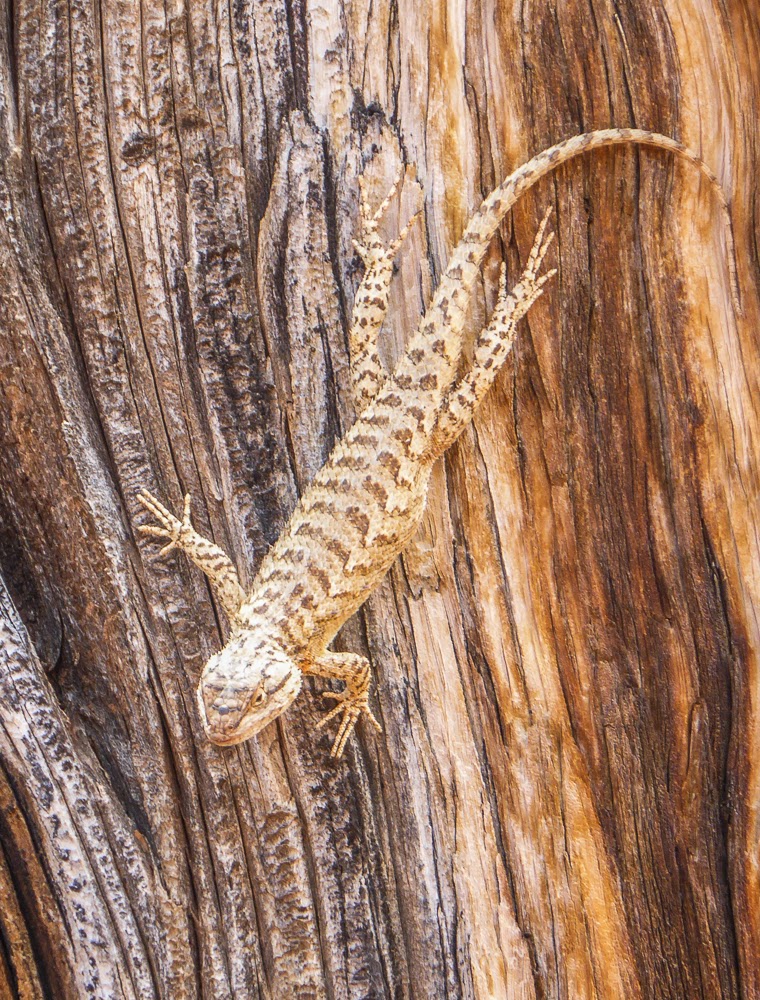 One last view inside the park. The storm was moving in and we had a few hours' drive ahead of us. 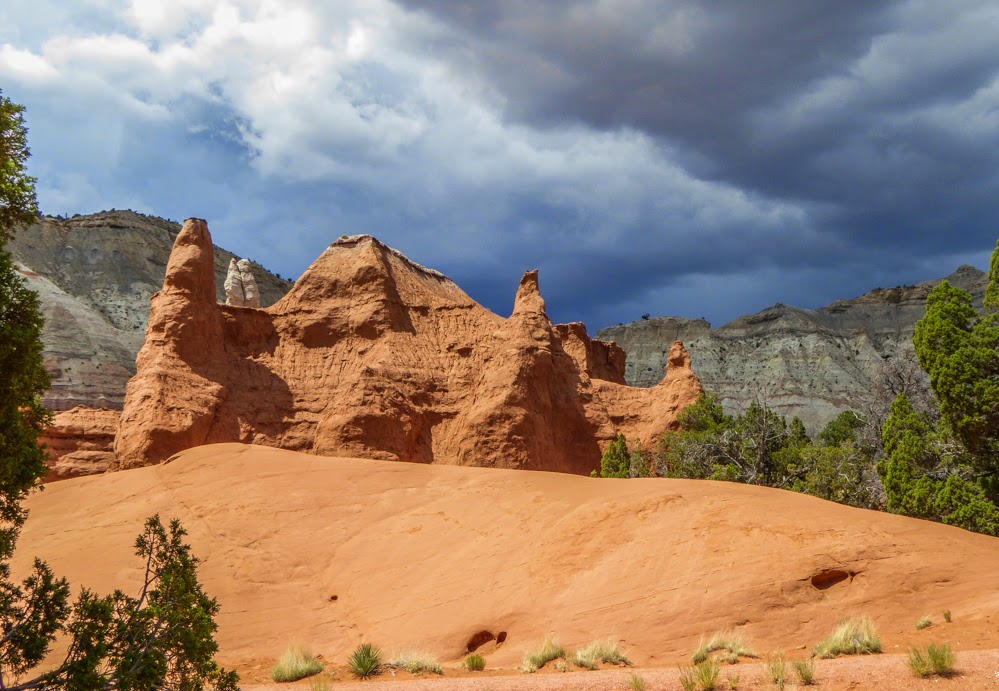 This wow! formation below outside the park stopped us in our tracks. I sent the photo to the Petrified Forest geologist, the new PhD, because I figured this would be Geology 101 to him, and this is what he replied:

"So this is what we in Geology call a 'cross-cutting' relationship and we use it to determine the order of events.
1) lower brown sandstone is deposited in ancient times. (I don't know the age of these rocks just from the photo.)
2) the darker reddish brown layers were deposited.
3) then there was a collapse into a subsurface void distorting all of the beds that were present at the time.
4) erosion leveled the top of the distorted beds.
5) the uppermost horizontal layer was deposited.
It looks like all of these past processes have created a good place for modern water runoff, which exposed this structure and has caused the small gully at the base of the cliff." 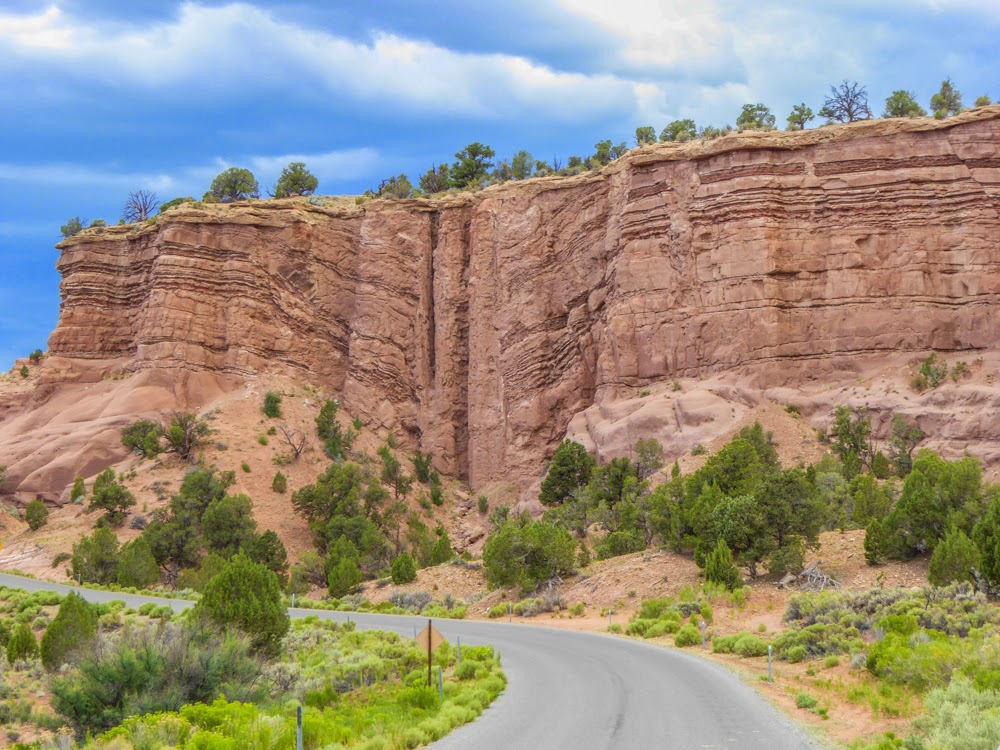 I'm conveniently not remembering the fate of the cookies, whether we finished the bag on the way home or actually saved some for later, which is a near-impossibility. We headed out to Bryce Canyon this past Sunday and while HH made a legitimate stop for gas, I hustled to the bakery for cookies. I won't admit to how many I got, but will admit we ate them all before lunch. Hey, it is a long drive.

There is little in life that could not benefit from a little love, a little time, and a stick of butter. - Anonymous, via Pinterest