In late July HH and I flew to Boston to attend his grandson's wedding. The wedding was in New London, Connecticut, but we had the morning of the day before the wedding to ourselves in Boston, which I immediately commandeered for a trip to the Boston Museum of Fine Arts. This is what I miss about not living on the east coast, when I could take Amtrak from D.C. to New York for a long weekend of museum-hopping and theater-going. I miss art museums a lot. The photos from the Boston museum are still in the works and would probably bore the socks off just about anyone, but I enjoy photographing the art even though I rarely look at it again.

That afternoon HH's son picked us up at the museum to drive us to New London to the bride's parents' house for a clambake. It was an amazing meal and I wonder why there are no photos of it - oh, right! I was too busy eating lobster, clams, mussels, and corn on the cob. The caterer did a fantastic job in an outdoor cook space, plating meals ahead of time so all we had to do was pass through the line and grab a plate. I refused to wear a lobster bib and came through, by sheer grace, without a drop of goo on me.

The following morning, the day of the wedding, we again had to ourselves because the wedding wasn't until 2:00. I had spied a church spire a few blocks away and wandered over to see if I could get in. I was testing doors, finding them locked, until a man drove into the parking lot and led me into the church, St. James Episcopal. He is an active, long-time member there and told me about its history and mission. There's a lot of information between his narration and the church brochure he gave me.

The original church building opened in 1732. It operated as Church of England, a break from the Congregationalists that had been the established church of the colonies. Ironically, this original "church of England" was accidentally burned, along with the city of New London, by British troops under the command of Benedict Arnold in 1781. Not only were the parishioners displaced, they were divided by split loyalties to the old and new governments. Also, Bishops, the only source for ordaining clergy, were all back in England, by then foreign and enemy soil.

Three years after New London burned, a new church building was being planned. It, too, no longer exists. They still needed a Bishop, though, and found one in Samuel Seabury. He had been elected Bishop in Connecticut in 1783 but of course had to go to England to be consecrated by the Bishops of the English church. A loyalty oath to the crown was required for ordination, but as he was a son of the New Country that was not possible, so he traveled to Aberdeen, Scotland and was consecrated there instead. He returned to the colonies as the first and only Bishop in America.

Seabury was an ardent rebuilder of the local congregation, traveling through New England confirming congregants and ordaining priests, working with them to found the Episcopal Church in America.

By the middle of the 19th century, New London had become the country's second-most important whaling port, with corresponding increasing fortunes, and this church became one of the beneficiaries. English architect Richard Upjohn, who had already built Trinity Church in New York, developed an early version of Gothic Revival design, and the church was eventually filled with medieval symbolism and elements such as crosses, candles, vested choirs, divided chancel, and stained glass.

The building became home to a "procession of memorials," as the brochure puts it, including an assortment of stained glass representing the craft's development in the 19th and early 20th centuries. It is said to to include the largest number of Tiffany windows in any single New England building, which is on the National Register of Historic Places.

Once again, I had to shoot handheld and kind of on the fly, as the nice gentleman who gave me the tour had other things he had to do, so these are not up to the standards I prefer for churches. They do, however, give a glimpse of this beautiful structure built with love and devotion by its parishioners. When it was dedicated in 1850, it even, already, contained a shrine. The body of Bishop Seabury was interred in a burial chamber beneath the high altar. 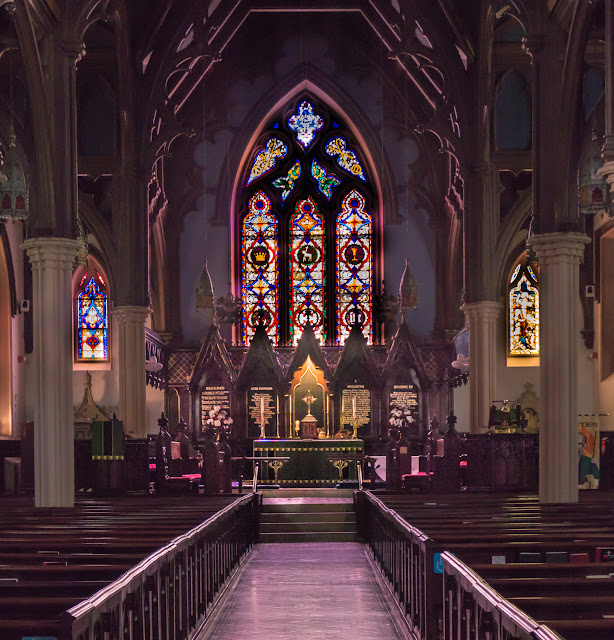 Some years later, the body of Rector Robert Hallam, the man who led the challenge to erect this building and who was one of the largest contributors to the cause, was interred in the same crypt as Bishop Seabury. The space is used for worship and is known as Hallam Chapel. 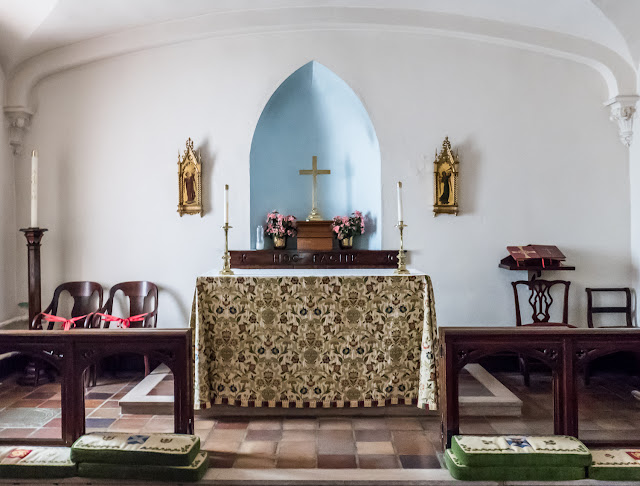 The "marble" below is in memory of Bishop Seabury. It is somewhat subdued, more so than what you might expect for this father of the Episcopal Church in America. I show it here because I love the fifth line from the bottom, which says, "[he] was translated from Earth to Heaven..." 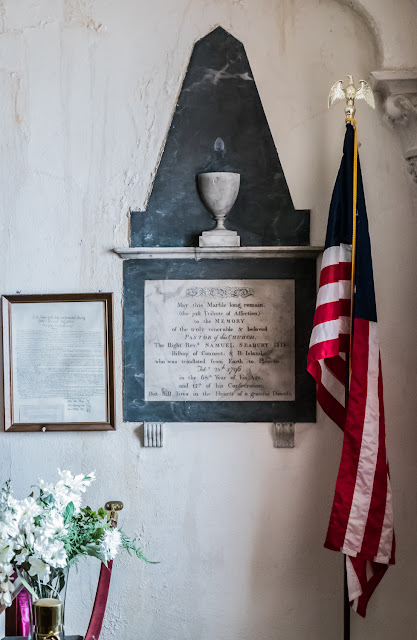 I look now at the brochure I got when I was leaving the church that describes its different features like the baptistry, a painting attributed to Bellini, and the Seabury and Hallam cenotaphs, and I see that I missed so much because of the necessary quickness of my visit.

The description of the windows in the brochure says most of the windows use larger pieces of glass and less leading than traditional styles. Some of its shading is achieved by varying the thickness of the glass, or building up various colors. Tiffany windows are translucent and when light shines through, the picture is illuminated like glass slides. Even when not illuminated, the picture is visible, albeit quite different from when it is lit. If no light passes through ordinary stained glass, the picture is dark with nothing really visible.

So now, forthwith, the windows, the crowning glory of this special place.

I don't know what window this is, other than it being about the Resurrection. And I also can't seem to get it centered.

The Stark Window, depicting the Resurrection. Cox and Sons, London. Installed in 1881-2 in memory of Robert Hallam; donated by Benjamin Stark. I wasn't allowed to close the open window.

Ironside Window, Appearance of Christ on the Sea of Galilee after the Resurrection. Tiffany, installed 1911. Not my best work, but the color is magnificent.

The organ is an Ernest M. Skinner from 1914. It has four manuals and sixty-five ranks of pipes. 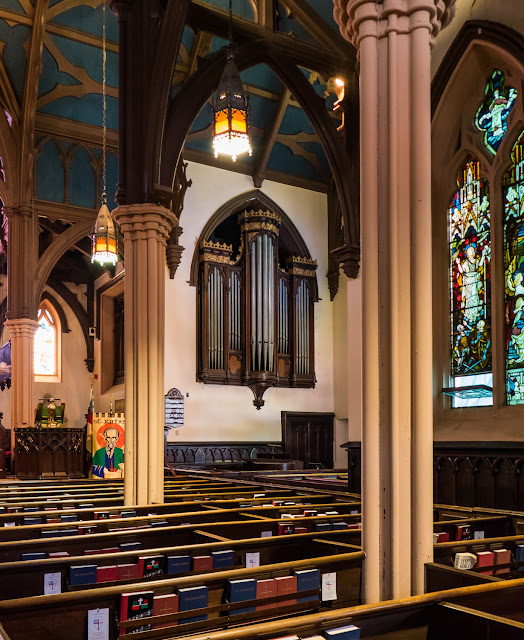 There are other windows there that I could not get at because of the angle or light fixtures hanging in the way.

This final window is behind the altar. What I like to do when I have a tripod is to take three to five shots in sequence at different exposures, then blend them into one when I process so I get all the lights and all the darks. I didn't have that luxury so this window, believed to be by the Henry E. Sharp studio in New York, is not at its best. 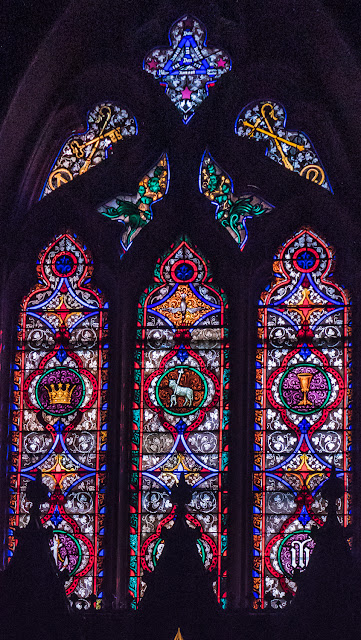 Being a true community church, St. James has an active ministry with other organizations in New London. It co-founded a shelter for homeless men, women, and families. It provides a monthly community meal for anyone who wants one, which was going on when I was there. There were more than a dozen workers in the parish hall, preparing hot meals, boxing them up, and handing them out with a bottle of water to whoever walked through the door needing a meal. They participate in a grass roots volunteer organization for the development of New London's commercial district, which is not the booming center of commerce it used to be. They work with Habitat for Humanity. The parish lends space to Head Start, AA groups, A Moveable Feast, and other faith-based and non-profit community groups, and in the past opened its doors to other Christian organizations which did not have a home. They organize an annual concert series and host other musical groups for concerts and recitals. And every other year, they send a group to Guatemala to build or renovate schools and churches.

I am no longer a church-goer. A Catholic born and raised with twelve years of Catholic education under my belt and the scars to prove it, I find organized religion leaves a bad taste in my mouth. However, I will say that if I were looking for an organization to call home, it would be a community like St. James. They are Christians - humans - in the most caring sense of the word.

The man who gave me the tour talked openly with me about his upbringing as a Catholic and not feeling accepted because of his lifestyle as a gay man, but had found a home here. I can understand why. As I left, I shook his hand, thanked him, and said, "You're a prince." He said, without pausing for breath, "No, I'm a queen." Now that's a guy I like.

I think tolerance and acceptance and love is something that feeds every community. - Lady Gaga