It's been pretty quiet in these here parts

Hoo, boy, a lot has happened since my last post, way back in September.

My experience at Yosemite was not the best, for a lot of reasons. but it was a catalyst for a big move in my life. One day last summer I had my truck at the dealer in Fresno for something or other, and while waiting for it I started looking at real estate in Green Valley, Arizona. Why? I sure don't know, other than I love Arizona. There must have been some subliminal juju going on because I never, ever expected to settle down just two and a half years into my time on the road, yet that's exactly what happened.

When I was volunteering at Tumacácori in southern Arizona in the fall of 2014, HH and I drove by Green Valley on our way to Tucson but never exited the freeway to take a look at it. So it was kind of strange that I started looking in Green Valley and not Tucson, for example, but I found a townhouse in Green Valley that I fell in love with. It had been recently remodeled throughout and was turnkey ready for move-in. It had almost everything I wanted. The only problem was my work at Yosemite was nowhere near being finished to free me up to return to Arizona to make the deal, and the ex-husband and I had our Washington house on the market but no takers.

It was not long after this that HH and I went to San Juan Bautista Mission in California where I lit a candle to the Lady of Guadalupe, asking for help in getting the house sold, and two days later we had an offer. I'm not making any judgments about this kind of cosmic assistance, I'm just telling what happened.

I kept watching the Green Valley house online, sure that every time I looked it would show as Sale Pending, but it was always available. To this day I don't know how it didn't sell but when I finally got back here in late September there it was, waiting for me. After being yanked about by the buyer of the Washington house way too many times, she finally came through and we closed on that property, giving me the money I needed to buy the house HH and I now happily live in.

I had next to nothing to furnish it with and thereby began the mad rush to 1) drive to Wisconsin to pick up what belongings I still had in storage there, with a detour to Minnesota to see the grands, and 2) to start hitting the plentiful and darned good thrift stores around here for furniture, etc., etc. The drive up north was 4016 miles in eight days or something like it, and I had the best, if frantic time, shopping for and refinishing furniture, trying to get it all done before I moved in.

We've been busy to the point of hopping since we moved in in November. It took a good two months to settle down even a little. There's so much to do here that I've had to jettison some activities to make room for those that matter more to me, and we're still discovering new places to go and things to see. It's really the best place I've ever lived, including my house, the neighborhood (a good HOA if you can believe it), my neighbors, and the Green Valley/Tucson area in general. We've done some traveling to Mexico, twice, and have another trip there coming up. We've been to the opera, a concert/ballet with a Latino flavor, another concert by the Green Valley Concert Band, and a performance of instruments called melodicas at Tumacácori (and now that we have, never have to again). These are just the tip of the iceberg of things we've done.

I'm still busy finding furniture to work on. My latest completed piece is this spinning chair I found at a consignment store:

An overexposed shot of the original, after I gave it a scrub and put it outside to dry. 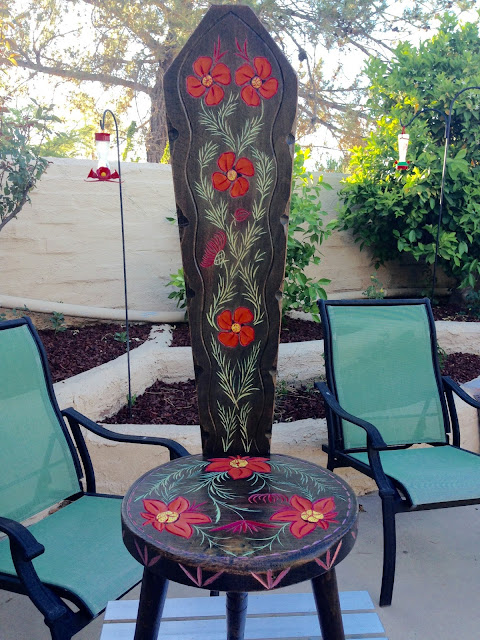 And the finished piece.

The chair has a stamp on the back. It says it was hand carved at the Studio of Arts and Antiquities in England. I just followed the carving which made it so much easier to paint.

The other two chairs are Goodwill finds, even better because I got a 20% Senior Citizens' Day discount. It's almost a sin to pay full price for most things here.

The prior piece I finished was a cherry cabinet that belonged to HH. We tried to send it home with his son and daughter-in-law when they visited a few months ago but they didn't want it. I finally got the idea to paint it in this design from a book of Mexican motif patterns, and just love it. It's in the office, storing supplies. Again, not a good photo and it has the cat in it. There's also an oval mirror that hangs above it, painted with the same kind of wavy line that's on the cabinet. 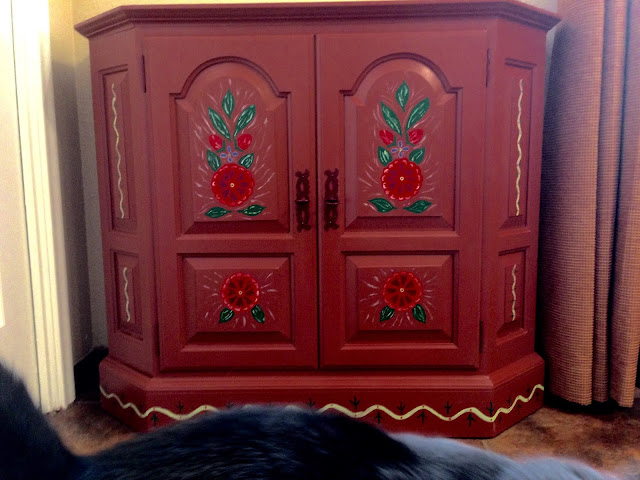 Mexico photos will follow. We returned from Mexico City, a fabulous place, with more than 1600 photos and I'm in the process of exerting some sanity on them. I'll try not to wait another seven months to post again.