I've been wondering why I don't post here like I used to, when I was on the road, working 32 hours a week, and taking long day trips on my days off. I think I finally figured it out - there was nothing much else to do in the evenings but edit photos of the places HH and I had been and toss them up here.

Since moving to and settling in Green Valley, I've been active beyond imagining. A much more active social life than I've ever had, plus twice-weekly physical therapy for a severed tendon in my thumb, keeps me on the go so much that a day at home with nothing on the calendar is an anomaly. I like it but it does take a toll on this blog, my self-taught Spanish, and other things that used to be higher on my priority list. I've turned into a slacker in certain departments but this morning is one of my empty-calendar days, so I thought I could catch up a little.

We traveled to Mexico City at Christmas last year, which was probably the best trip I've ever taken. The Angel of Independence was just down the block from our hotel. It was built in 1910 to commemorate the centennial of the beginning of Mexico's War of Independence. Atop the column is a statue of Nike, the Greek goddess of victory, but it is commonly called The Angel. In her right hand she holds a laurel crown above Miguel Hidalgo's head, symbolizing victory, and in her left she holds a broken chain, symbolizing Freedom. The Angel is a landmark, as in "Let's meet at the Angel." I used it a few times when I was wandering on my own and had to ask, "¿Dónde está El Ángel?" If I could find the Angel, I could find the hotel. 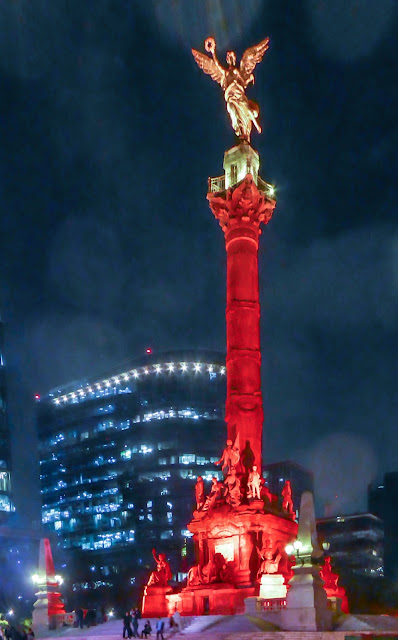 One morning I joined a long line snaking away from a food cart to get a real-Mexican-food breakfast. Transactions were fast because offerings were minimal and everyone but me knew what they wanted. Luckily the woman in front of me spoke English and told me what the food was.

The next few photos are what I took back to the hotel on at least a few mornings: tamales Oaxaqueños (wah ha KEN yos), steamed in banana leaves and so soft they are eaten with a spoon or fork; a couple of churros; cups of what might be champurrado, a hot chocolate drink thickened with corn masa; and fresh cut fruit from the food cart next door. All of this delicious food set me back about $5 US. 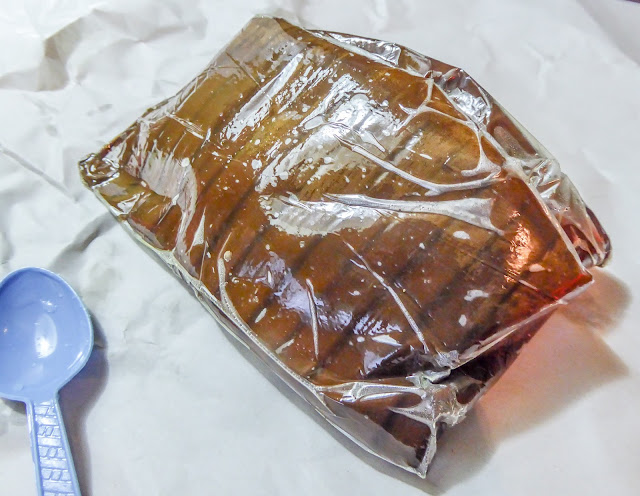 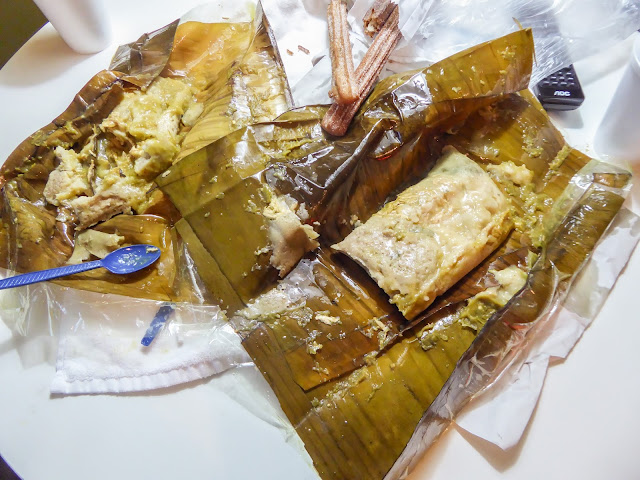 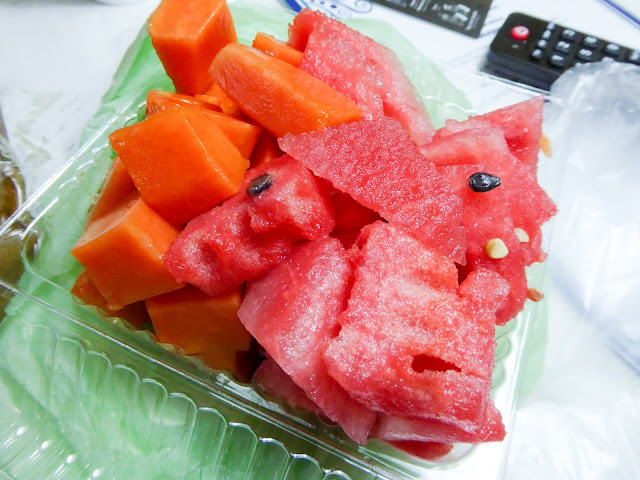 Thus fortified, we set off for what was at the top of the long list of places I wanted to see: the Museo Nacional de Antropología, the National Anthropology Museum. Because it isn't an art museum, I thought it would be a quick-ish trip in and out but oh, no. We spent the day there and went back a second time to finish. It's that good. 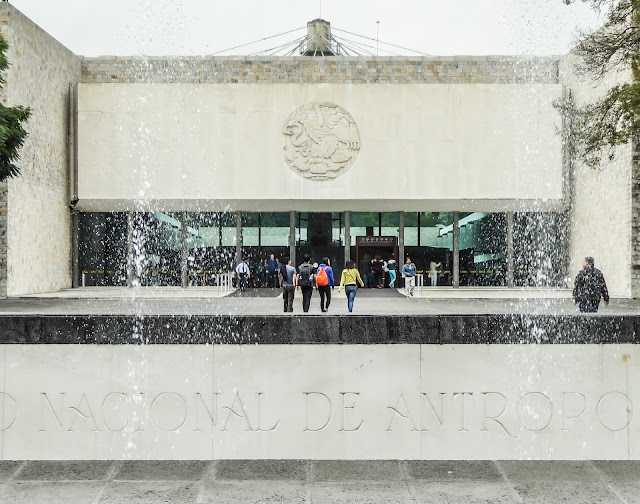 The entrance with ticket booth ($65 MX pesos each, about $4 US!!!) and fantastic gift shop are in the first building, which leads to a large courtyard and the entrances to the salas - huge galleries that are each dedicated to different anthropological and cultural collections. As a side note, Mexico uses the $ symbol for its money, which kind of freaks you out when you look at a ticket price of $65. Once you get used to it and start dividing it by 17, the rough exchange rate in effect for the three trips we have so far taken to Mexico, nothing seems so bad. Even the hucksters, selling any- and everything, say, "It's almost free!" in very good English.

This waterfall is in the courtyard. Museum policy prohibits playing in it, but people did and security was there to shoo them away. It was stunning, if only for its size. 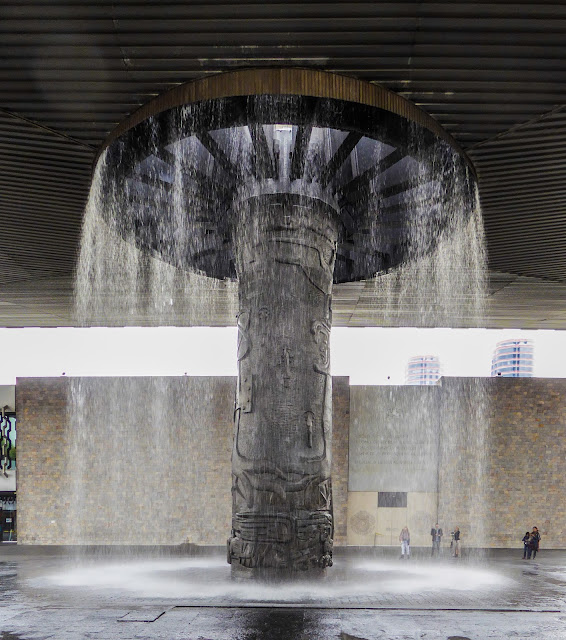 On to the collections. I took so many photos it was ridiculous and will only show a few things here and not necessarily in chronological order. 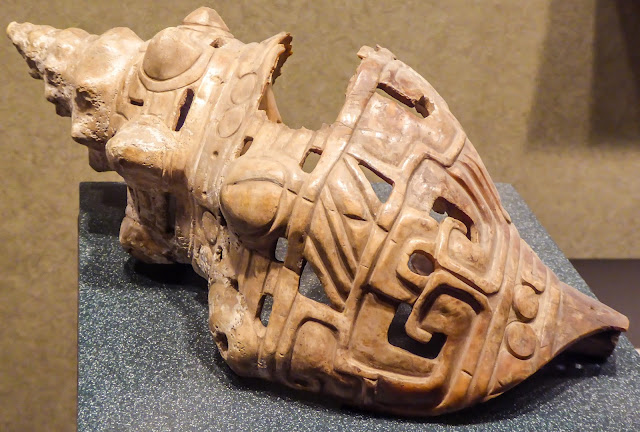 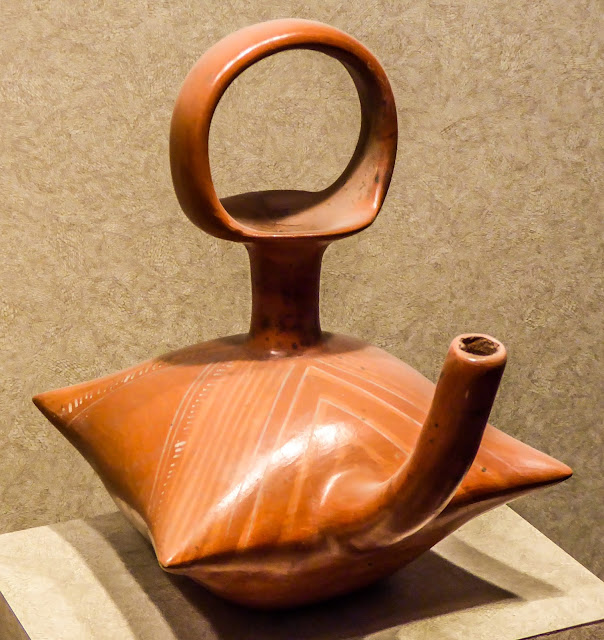 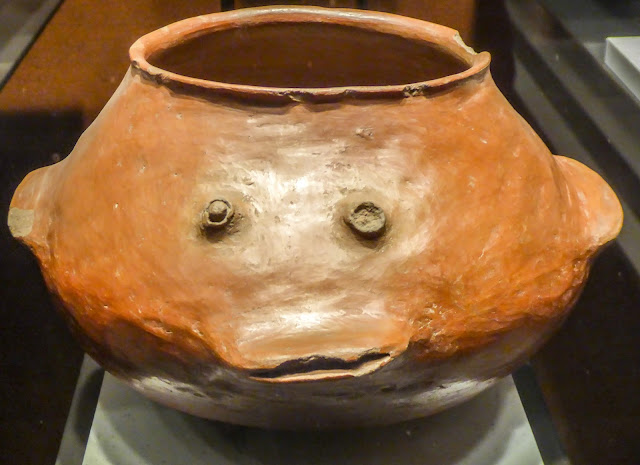 Cut paper figures come from the Nahua, state of Hidalgo. The figures have historically been used in ceremonies, representing gods and nature spirits and used in rituals to ask for rain or cure disease. They're never based on Catholic saints, having come down from pre-Hispanic Mexicans.

This is at the entrance to the gallery. 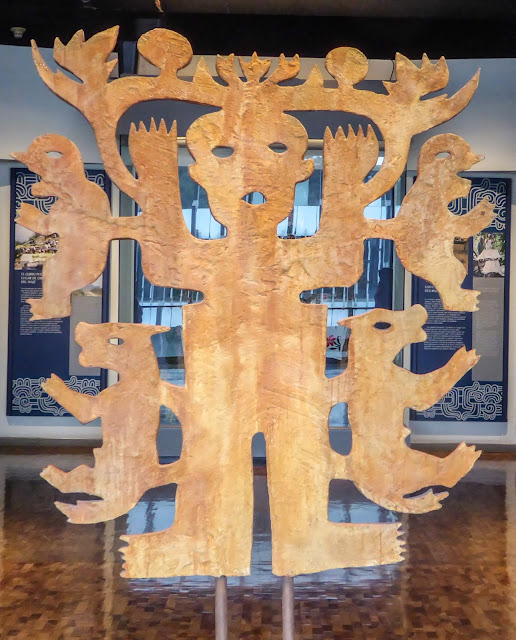 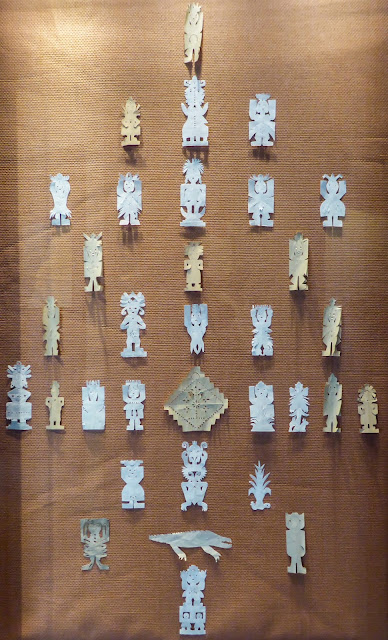 I don't remember what this is from, other than a church in general, but I liked the shapes and lines, so here it is. 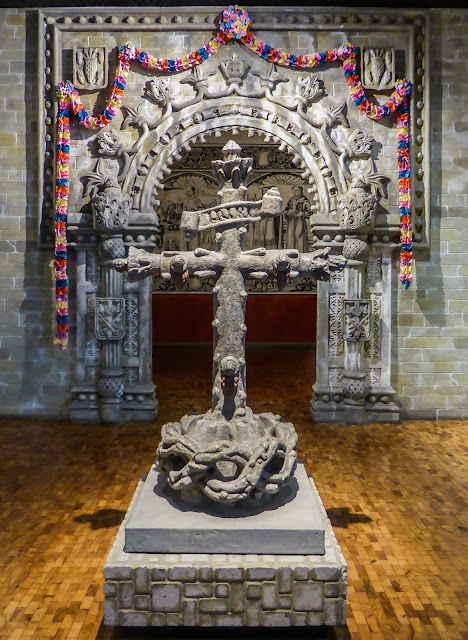 There were several figures like this around the museum. Aren't they chill? I loved them. 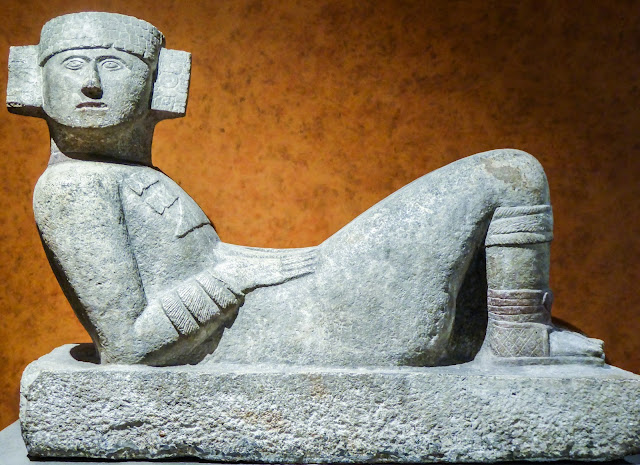 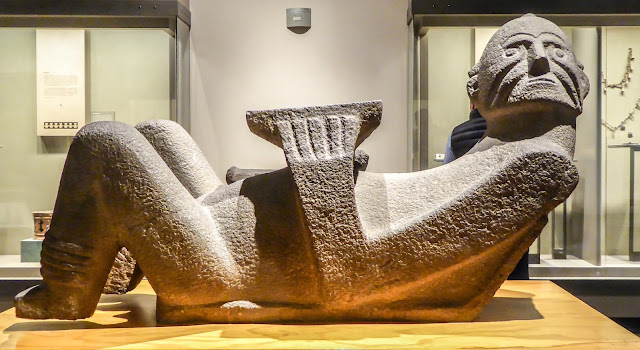 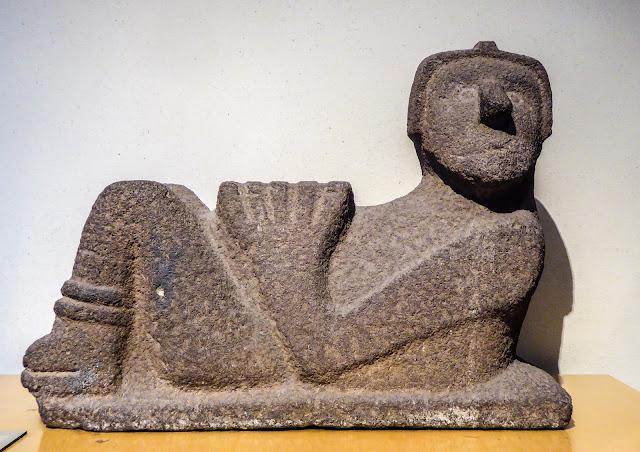 The caption next to the wood carving/etching below read:

Conca'ac. The People.
There was no earth, there was only the sea, the sky, and the sea animals. To make the earth the animals came together and decided to go to the bottom of the sea to bring the earth. But none could reach the bottom, until it was the turn of the giant turtle, the seven row turtle.

The great turtle took a month to go and come back, but when it reached the surface it had some sand under its nails and thus the earth could be created. That is why when the Seri catch a seven row turtle they do not kill it but take it alive to their village where they hold a festival in its honor to thank it for the feat of its ancestor, and then they return it to the sea. 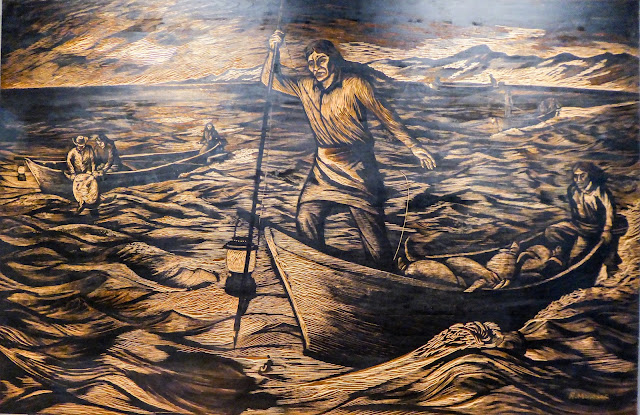 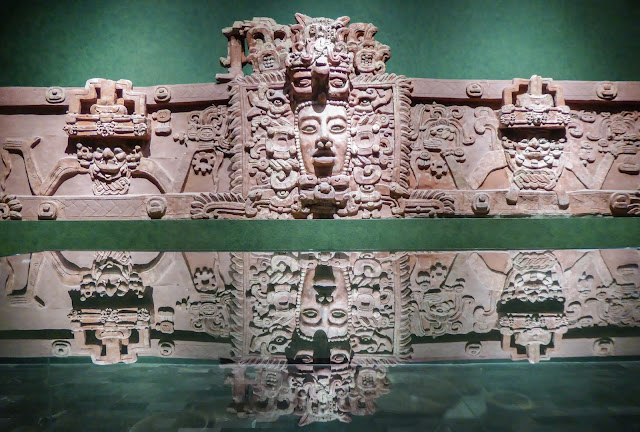 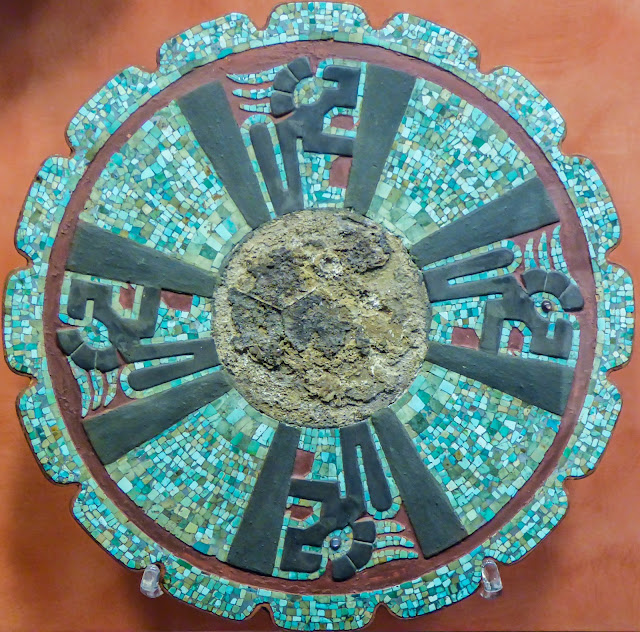 In addition to artifacts from ancient cultures, the museum also showcases contemporary arts, like this carved wooden figure with its distinctive Oaxacan style. The colors are vibrant, almost neon. There is no mistaking Oaxacan art. 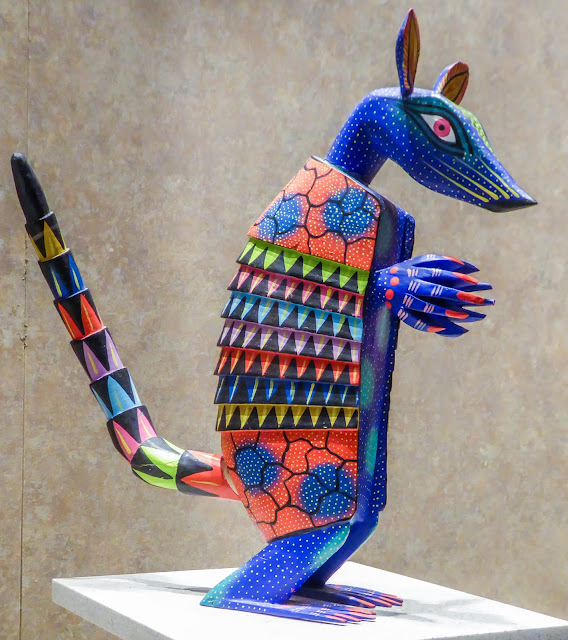 This oversized basket and interesting stand were at the entrance to one of the galleries. 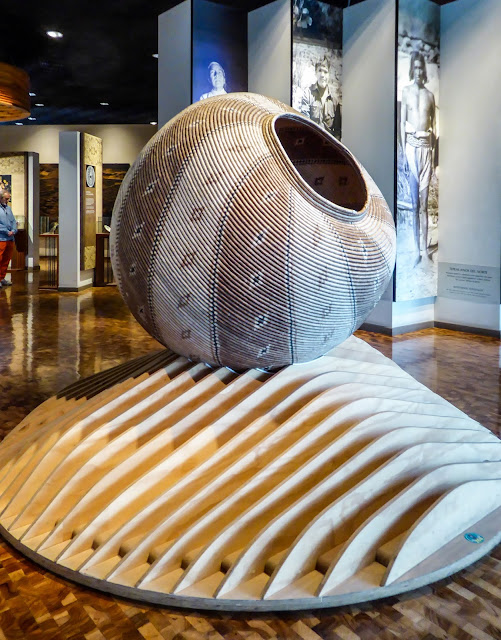 Two painted pots that I did not get any info on. Similar styles but different when you really look at them. 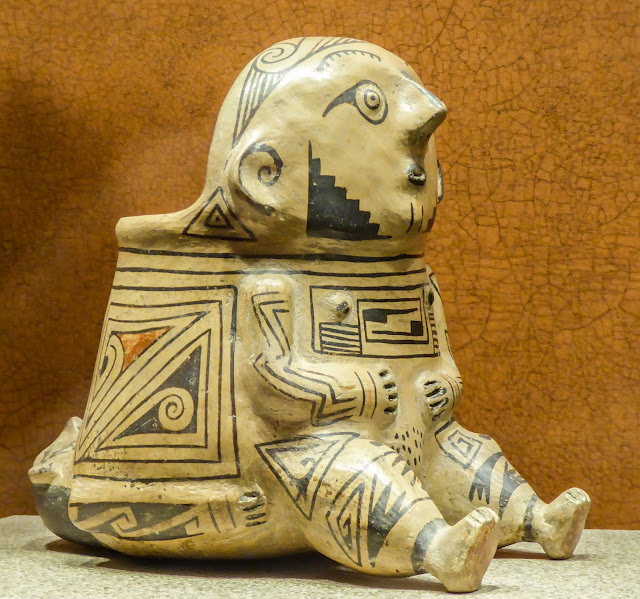 The first thing that sprung to mind was The Queen of Hearts. 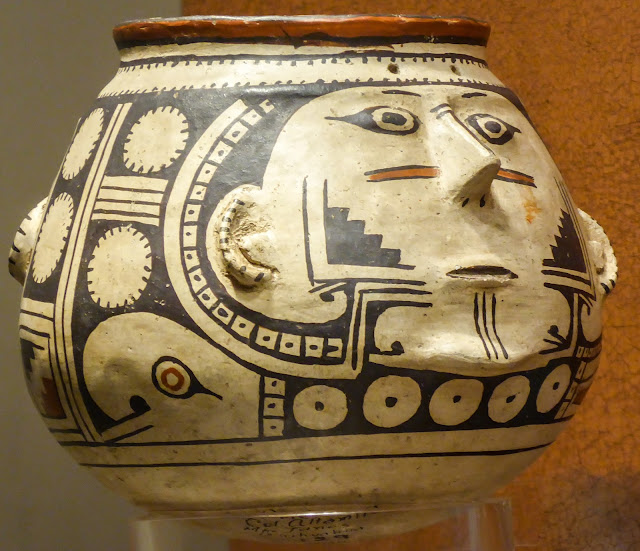 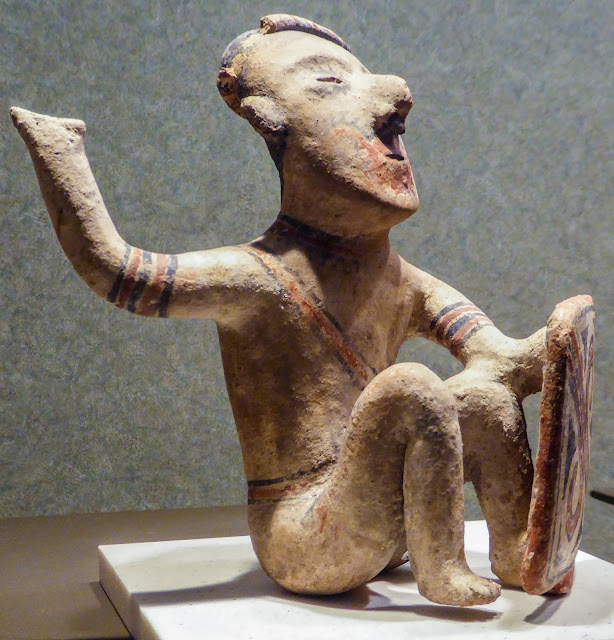 This is the famous Aztec calendar that you may have heard about. Technically it's called the Sun Stone, Stone of the Five Eras and dates to the late 14th-early 15th century. It was straight ahead as I walked into the gallery and it stopped me in my tracks. 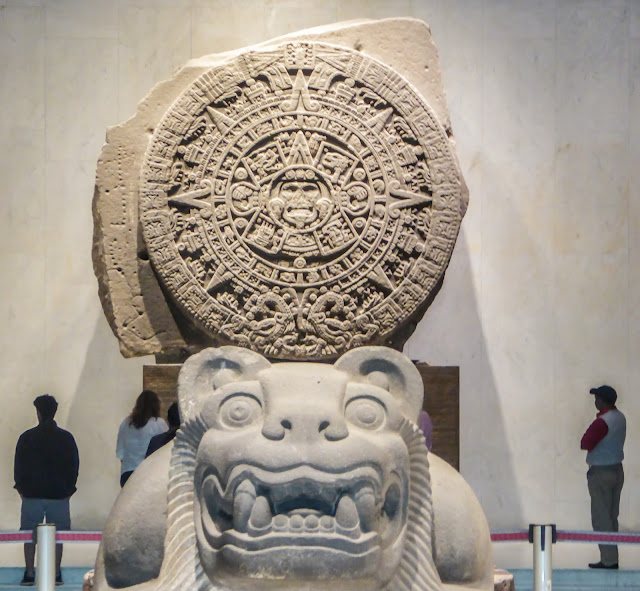 Here is a closer look, and the last of the museum photos for today. More from here and the rest of the trip to follow. 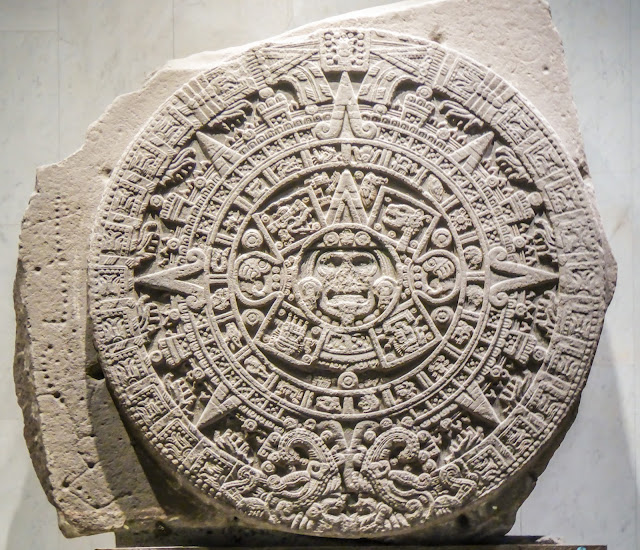 As we left the museum to forage for food, we came across this vendor selling snacks. All of it was more or less straightforward and I got a bag of pepitas. 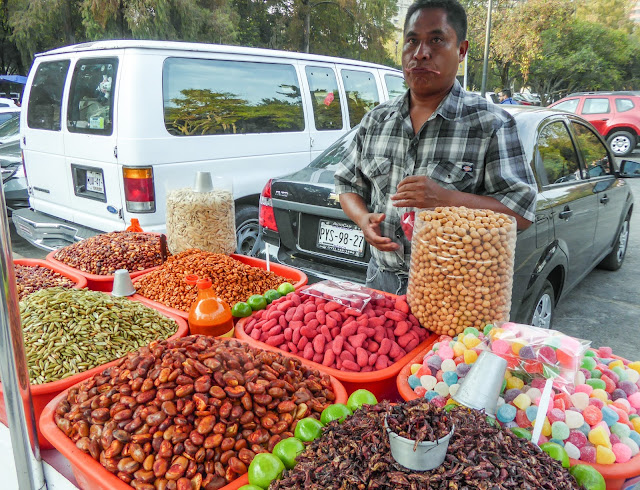 However, I passed on this pile of delicacies, grasshoppers. I'd have to be pretty hungry and might like them if I ate one, but that will remain one of life's great unknowns. 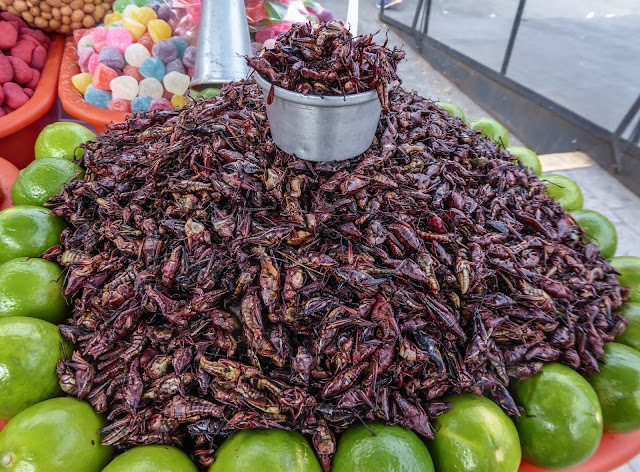 I would much rather look at one in stone. 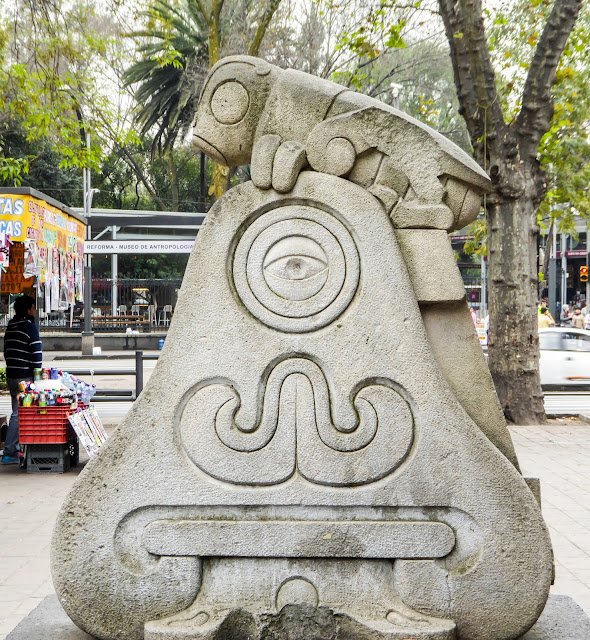 If Jesus was a Jew, how come he has a Mexican first name? ~ Billy Connolly