Too pretty to burn

Madison, Georgia has a couple of romantic legends about why it was spared from destruction during Sherman's march to the sea. One legend says Sherman had a mistress there; the other claims Sherman said Madison was "too pretty to burn." I went to Madison the other day and asked at the visitor center if either of these stories was true.

Madison is indeed a pretty, pretty place but it turns out neither of the legends is true. What, or rather who, spared Madison is Joshua Hill. Hill was a Georgia Congressman but a strong Unionist who resigned his seat in protest of Georgia's vote for secession; additionally and not incidentally, he was a friend of Sherman's brother. Then, as now, it ain't what you know, it's who you know.

Madison is yet another of those places that needs a return visit. I was able to visit just a few sites that were on my list;  to see everything will take a lot more time.

The Historical Society offers a three-fer: a $10 ticket gives access to three historic homes complete with guided tours. The first home was Heritage Hall, also known as the Jones-Turnell-Manley House, built in 1811 by Elijah E. Jones, a doctor with the Confederacy. The docent on this tour initially spoke of the servants who performed various tasks but, when questioned, admitted it was slave labor, not paid labor. It's understandably a touchy issue.

It is the only home in town with four columns flanked by two square piers. 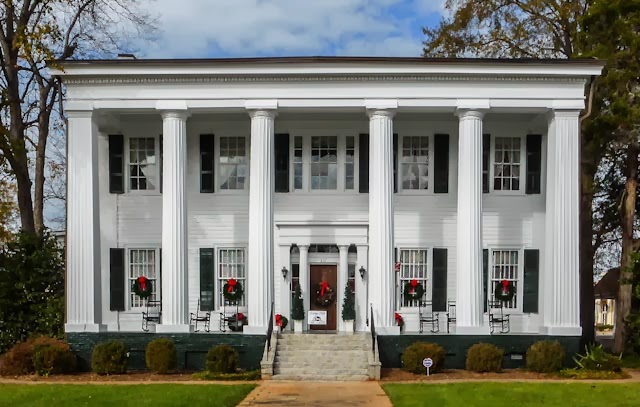 It turns out I had perfect timing for the tours as the Christmas decorations had just been completed. But let me say how freaky it is to see everything done up for Christmas when it's 60 degrees outside. I'd forgotten about this from when I lived in Texas.

Heritage Hall was one of many in-town farms and was on four acres. It first was situated 200 feet from its current location and was moved before 1912 when its then-owner sold some of the acreage for construction of a church. The entire home was lifted, placed on logs, and pulled by teams of horses and mules.

It was a private residence until 1977 the last owner, pictured in her wedding dress in the photo on the wall, below, donated it to the Historical Society.


Furnishings throughout the house have been donated over the years. The docent said nothing is turned away, and if the donor chooses a place in the home for the item, it is always kept there. The cradle in the corner holds a doll. A visitor to the site said she should be moved out of the afternoon sun, but the donor said that spot is where she should remain. 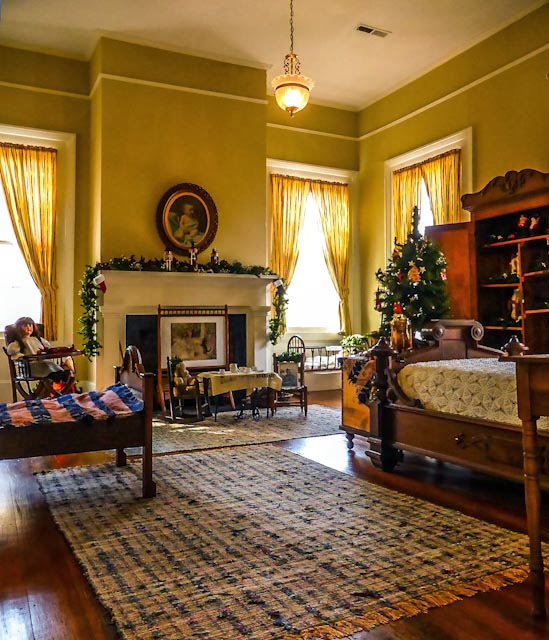 The doll in the photo below, on the right, stays in her high chair, all year but goes "home" for two weeks at Christmas every year. She has a lovely head of real hair. 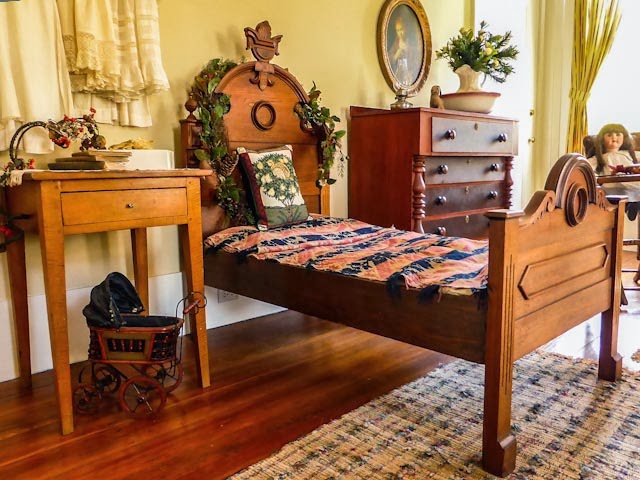 The crocheted coverlets on the beds were made by the slaves. They are all in amazingly new condition. I've done a very little bit of this kind of work and can testify to the amount of time they take to complete. 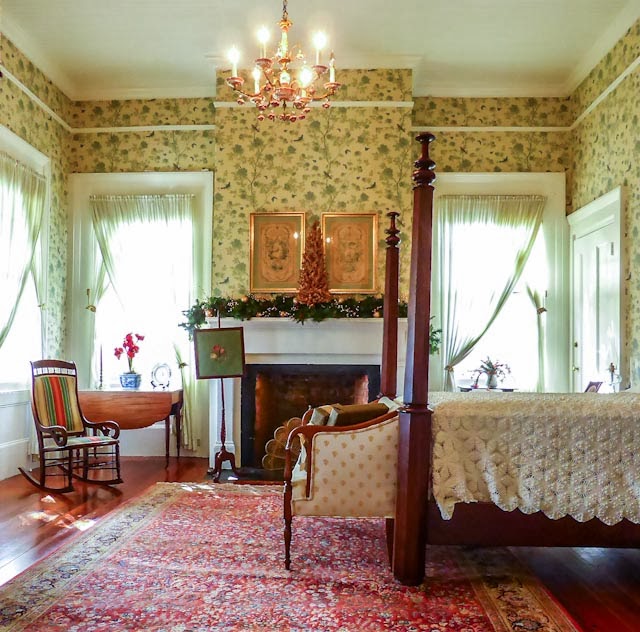 The room below was first used as the dining room but was converted to the doctor's office. The door with the wreath on it, at far left, leads to the outdoor kitchen. The doctor required the slaves to whistle as they approached the house, not, as you might think, to announce their presence in case he was seeing a patient, but because he knew they couldn't whistle and at the same time eat off the platters of food they were bringing in for a meal.

The second house on the tour was a town home, a place for a family, generally the wife/mother and children to live in, away from the plantation in the country. While far more modest than Heritage Hall, to me it was much more comfortable and livable.

A back shed was likely added around 1820 when census records show 18 people lived here. 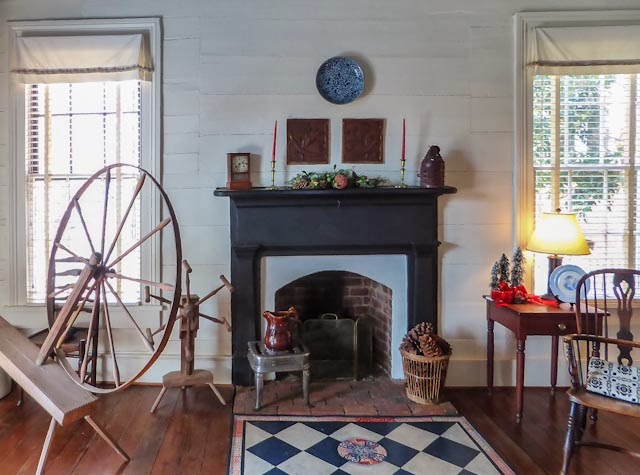 The house predates the Morgan County Courthouse (the photo's all the way at the end) by almost 100 years.

The house has had 17 owners and was restored using photos and records from the city's archives. It looks as it probably did in 1873. Furnishings are representative of the mid-19th century.


The last house on the tour is known as Rose Cottage. It was built by Adeline Rose in 1891. 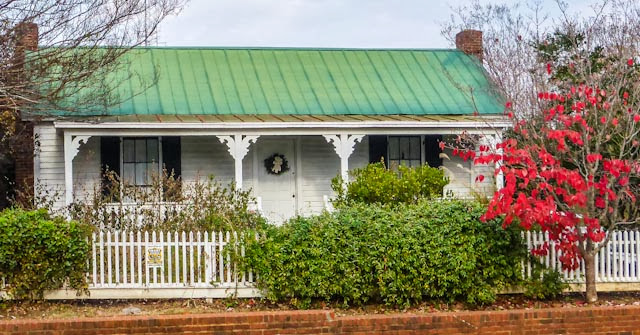 Adeline Rose was born into slavery and little is known of her before 1891 when she earned a living for herself and her two children by taking in laundry at 50 cents a load. 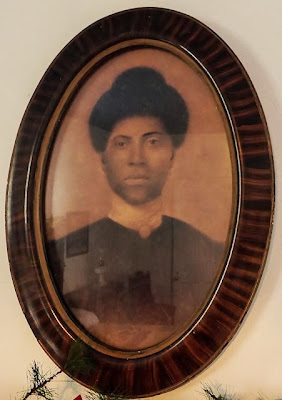 She made the quilt on this bed, which does not say Jesus Saves, but Jesus Saved. 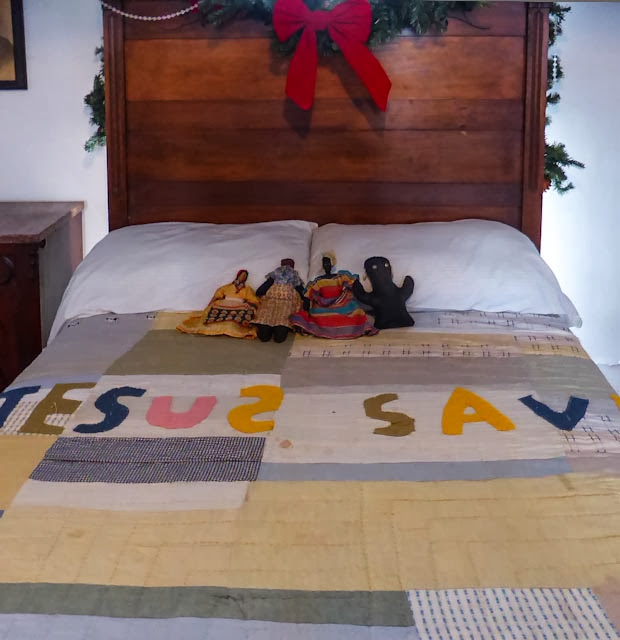 These two pieces are not hers but were donated. Gorgeous work. 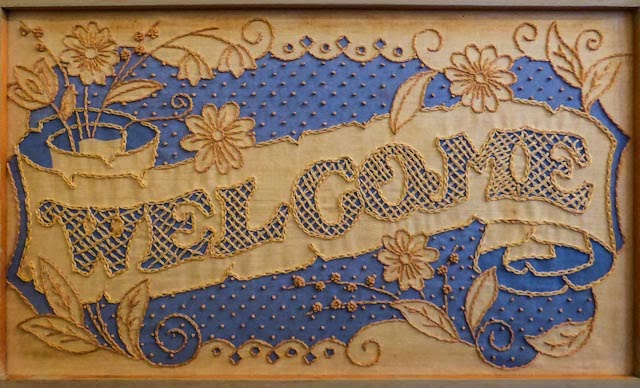 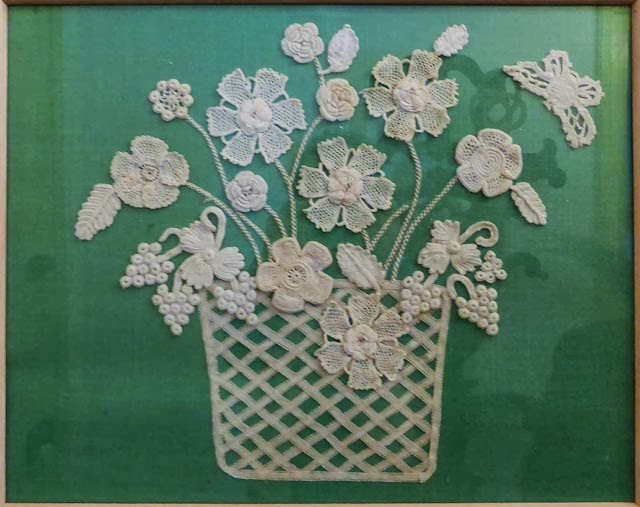 Adeline died in 1959 after living in the house for 68 years. In 1966 the City of Madison moved the house to its present location next to Rogers House.


And here is the County Courthouse, built around 1905, and called an "outstanding example of Beaux Arts design." Another item from the National Register of Historic Places to be crossed off my list. I wish I'd gone inside. 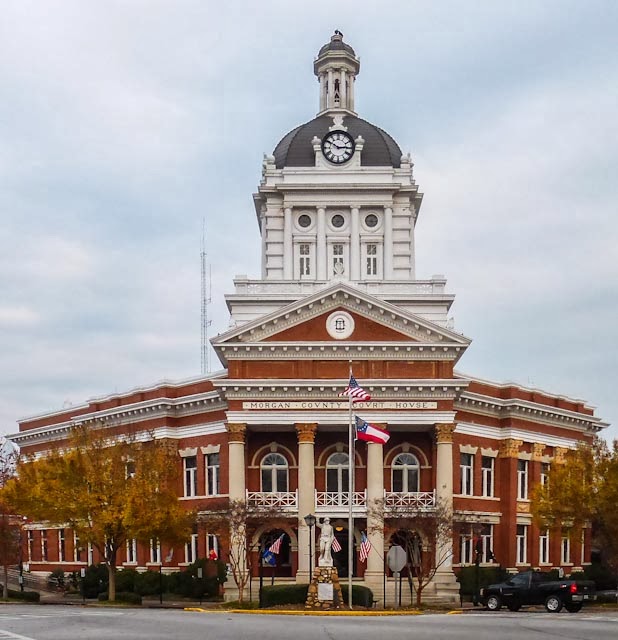 History is herstory, too. (Unknown)