So far I've been walking easy trails here at the north rim but have been eying the start of the North Kaibab trail with the hope of getting a permit to camp at the Cottonwood Campground down in the canyon. It's not all the way down, but it would be an accomplishment and I'd be happy with that. Until Sunday I hadn't gotten around to doing anything more toward that goal than walking over to the trailhead, peering down the trail, and becoming slightly alarmed watching people emerging from the depths, heaving for breath, red-faced, and sweaty. Yikes.

On Saturday my HH and I met the husband of our next door neighbor. HH had already learned that she is a retired librarian/archivist and is working in the book store for the season. Her husband is also an archivist and he comes up from Phoenix on the weekend. They're both outdoorsy types and he told us he'd hiked the North Kaibab part way to the Supai Tunnel the day before, turning around before getting there because he wasn't sure how much farther it was. When I said it was on my list, we agreed to give it a go on Sunday. The trail guide says it's 3.8 miles round trip and how hard could that be?

There is no such thing as level on this trail. On the way down, your every step is downhill, and I think you can see where I'm going.There ain't nothin' level going back up either.

Coconino Overlook is a stop on the way to Supai Tunnel, .7 miles from the trailhead. Great! That means it's only a little over a mile more to the tunnel. I was leading the way because my hiking partner wanted me to set the pace, and I was taking my time. I think it took about an hour from the top to the tunnel. There are a lot of rocks, loose sand, loose sand over rocks, tree roots, and mule poop to be careful around and I just went slowly.

Those are my hiking poles leaning against the rock and am I glad I took them. They make a big difference with stability in both directions. 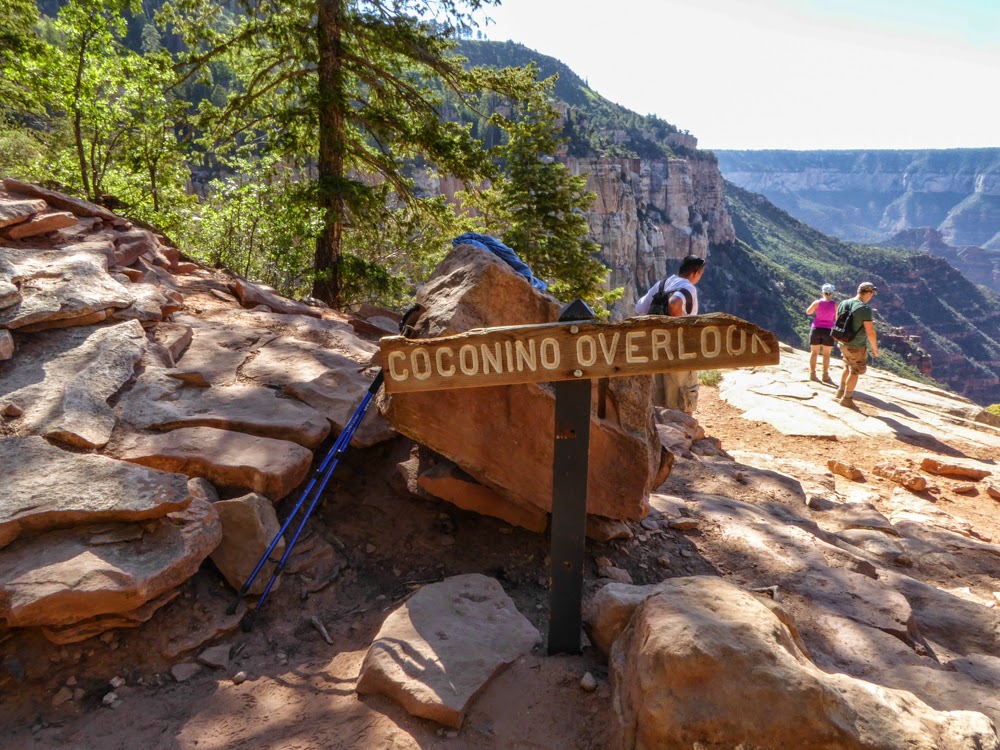 There's not a lot to see on this part of the trail. It leads to a kind of slot canyon so there aren't wide, expansive views but what is here is predictably gorgeous. 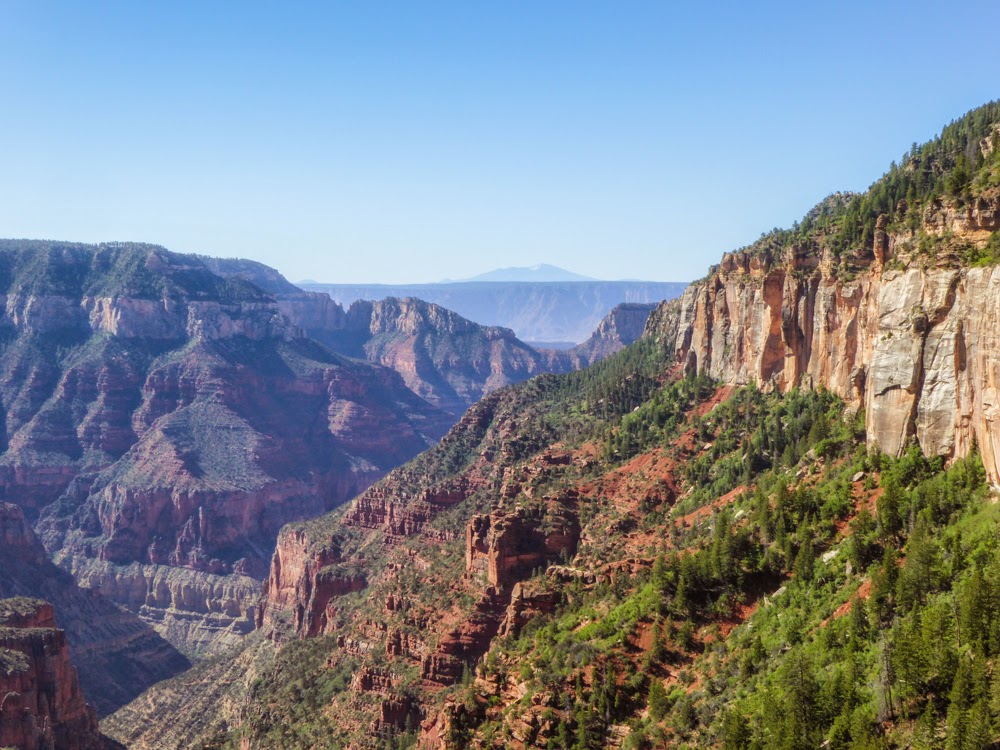 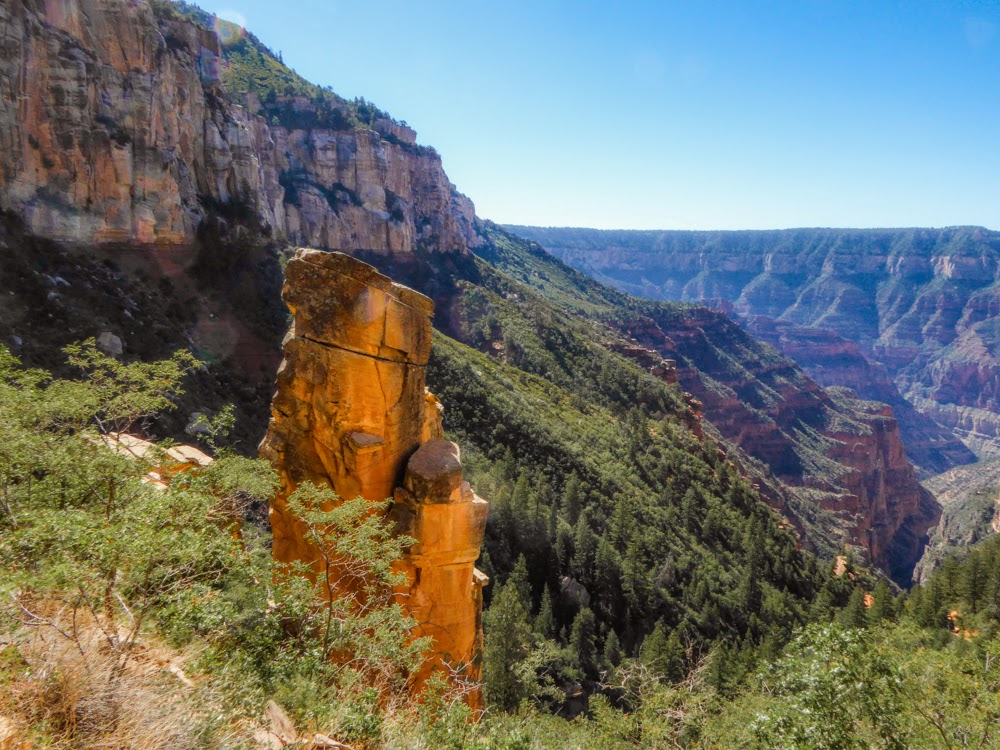 Look closely at the bottom, almost center, of this next photo.There's a faint light bridge spanning the canyon. That's part of the trail and one I'd cross if I ever have enough nerve to hike to the campground. 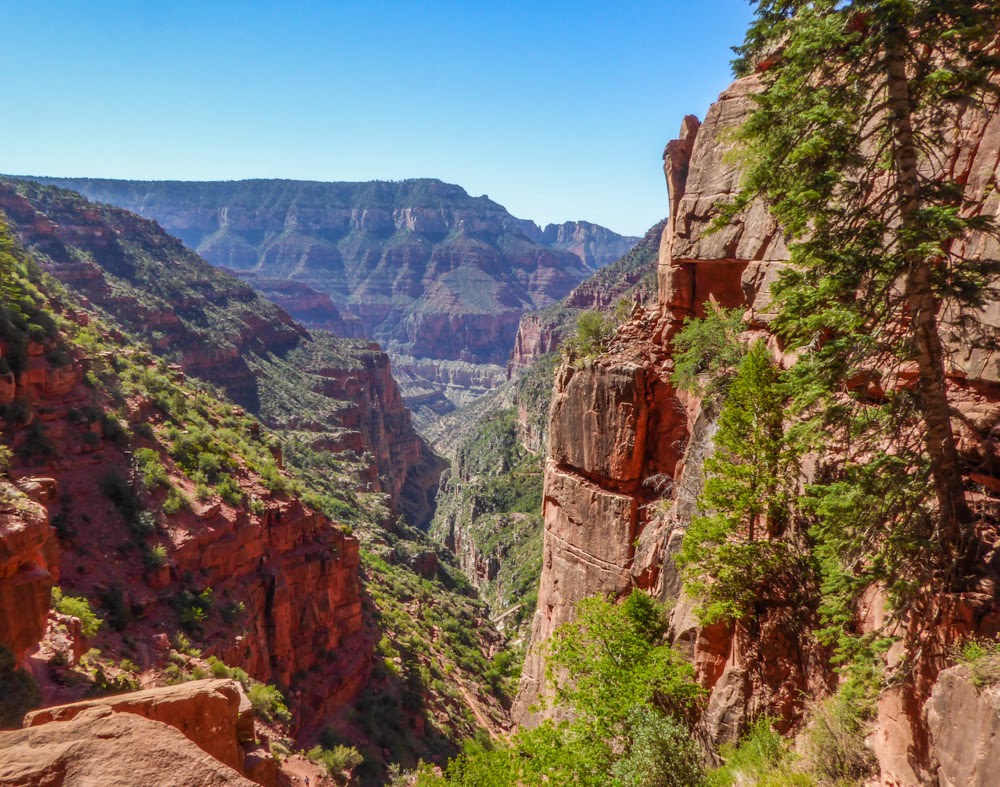 We finally made it to the tunnel, which was blasted open by the CCC in the 1930s. Just to prove I made it that far I asked to have my picture taken; it's better that I had it taken then because later I wasn't in a peppy mood. 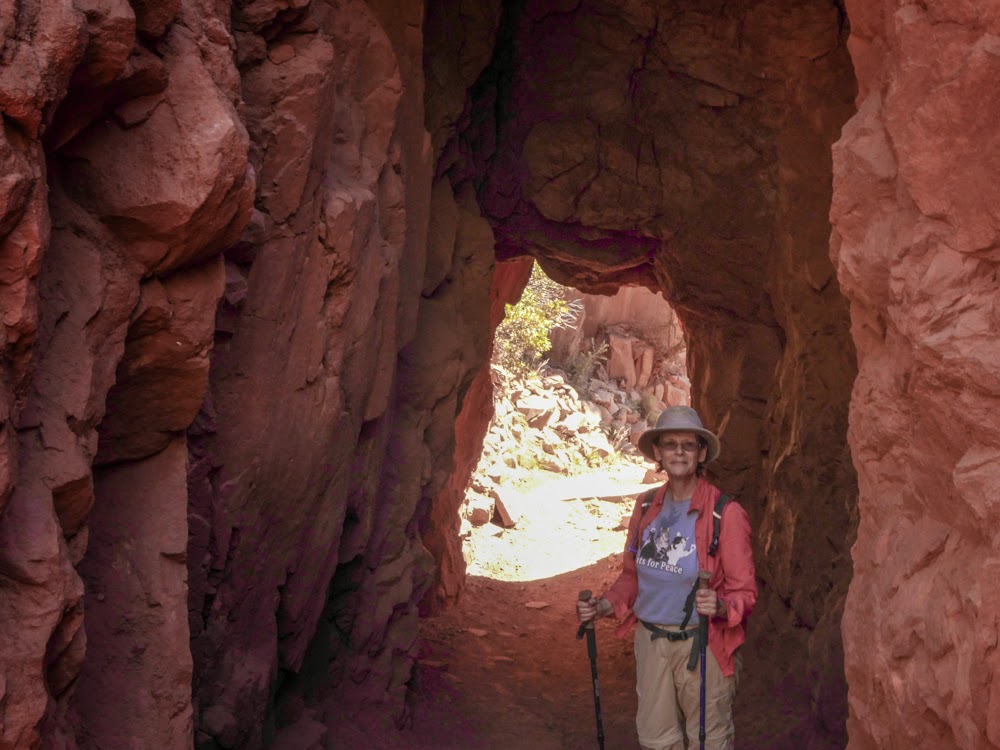 We went just beyond the tunnel to sit for a bit, take in the view, have something to eat, and get fortified for the trip back up. Even though I'd just come down that trail, I still didn't quite get how bad it is going in the other direction. 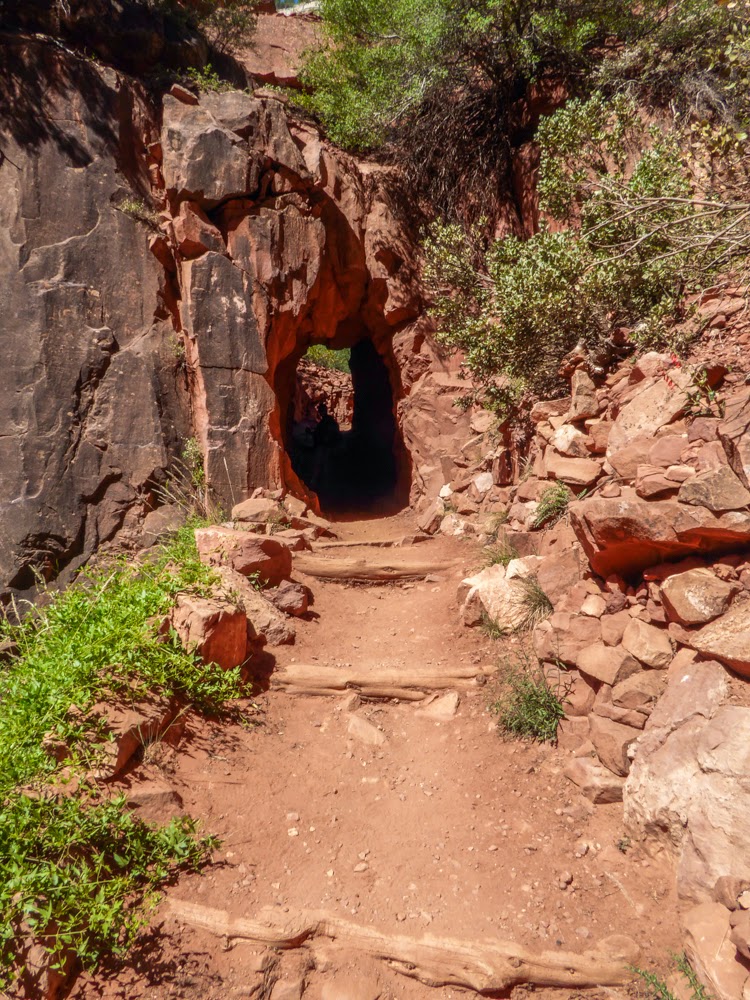 I meant to count the switchbacks going back up but after the third I was really too busy breathing and lost track. Here is a view going uphill, the trail on the left. It looks easy, doesn't it? It's a liar. 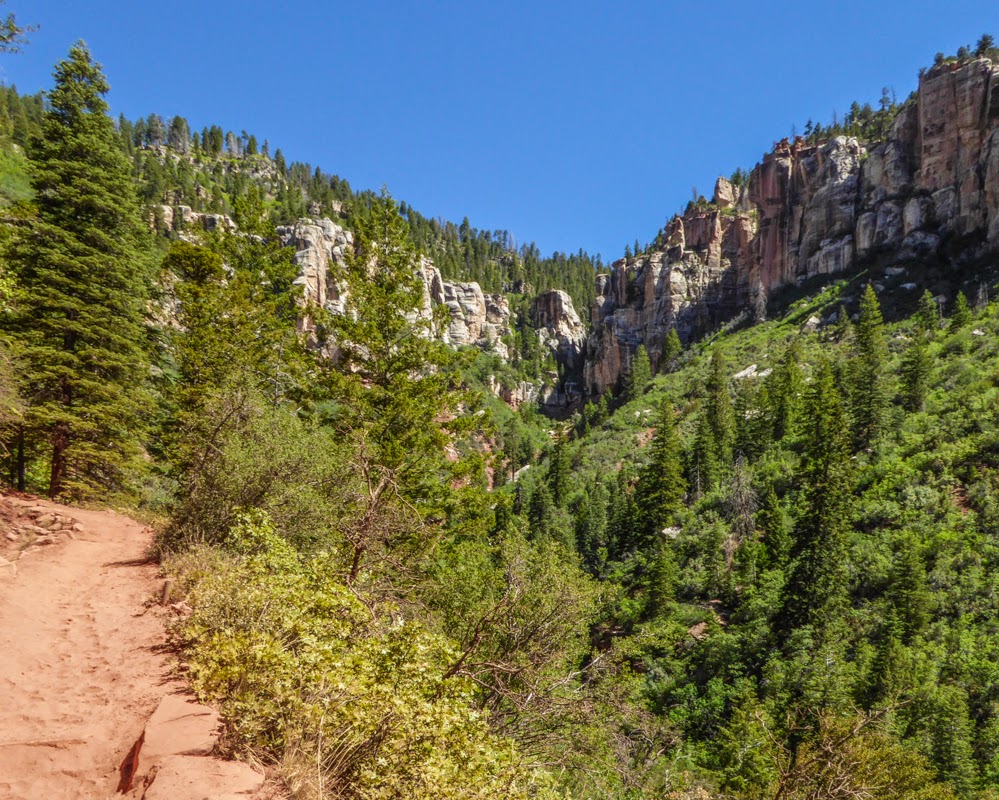 Having to have some excuse to stop other than saying if I don't stop I'll die (although in my defense, the elevation is around 8500 feet), I tried photographing wildflowers along the way. It wasn't overly successful because I was constantly sucking in air and my hands weren't particularly steady, but I managed to get a couple keepers. 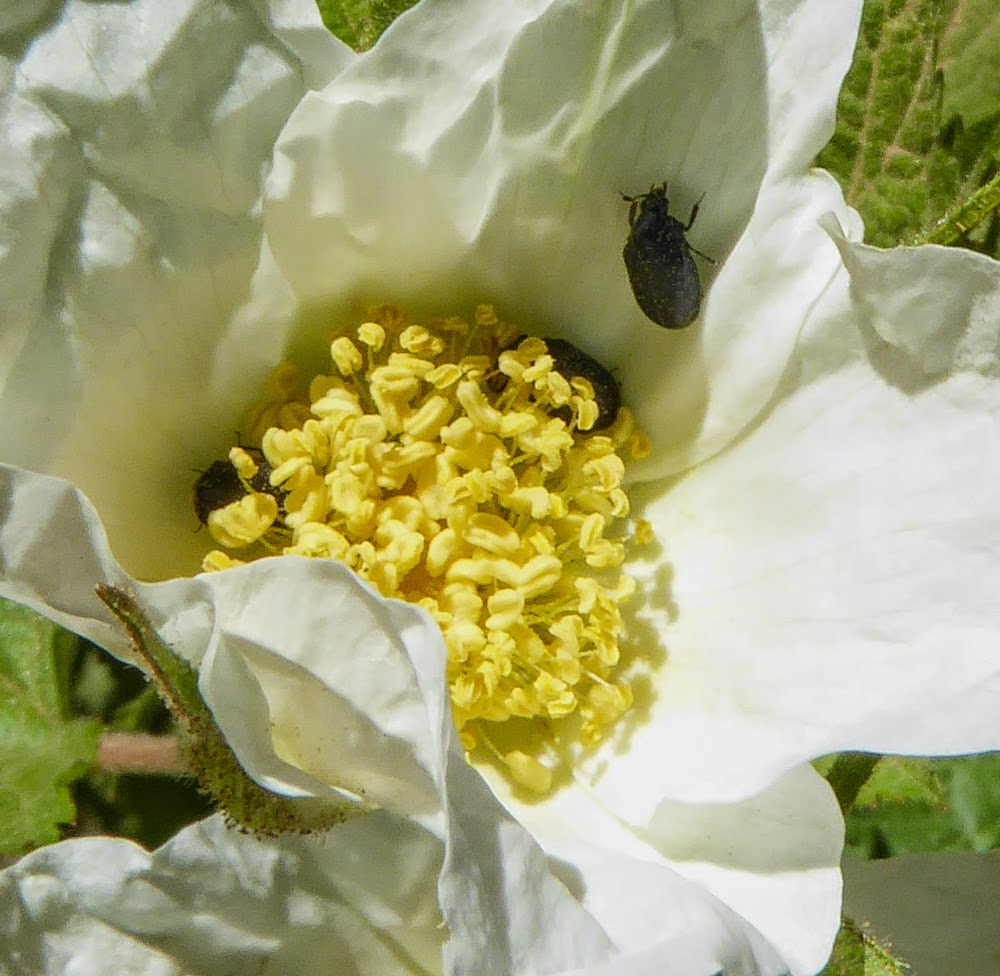 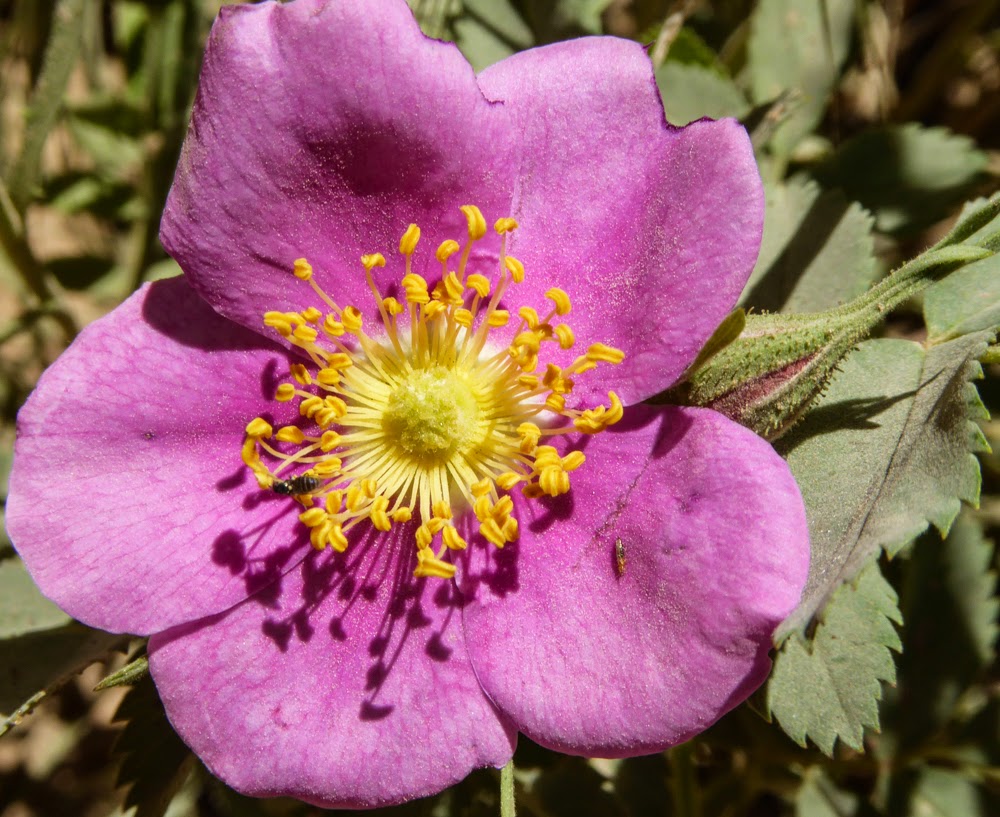 After my saying about a thousand times that there's no prize for a quick exit, it took us an hour and three-quarters to hike back to the trailhead. I've considered myself in good shape but apparently have been sadly misinformed; I've never walked slower in my life, I've never had to stop as often or as long to catch my breath, and I've never in my life felt I was holding someone back, but there's a first time for everything. So I have a new goal. I'm going to hike to Coconino Overlook twice a week and work on fewer stops coming back up. When I'm better at it I'll think again about going down to the campground, and won't think twice about hiring a mule to carry my gear in and out. There's no prize for being a martyr, either.