On our way to Chiricahua National Monument a couple of weeks ago, we passed a cemetery almost hidden in the grass near the ghost town of Dos Cabezas (two heads), named for the twin outcrops in the nearby Dos Cabezas Mountains of southeast Arizona. We stopped at the cemetery on our way back from Chiricahua, with the idea of going to Fort Bowie National Historic Site next, but an urgent need for fuel in the forms of petroleum and a Dairy Queen Peanut Buster Parfait, made with hot fudge and caramel sauce, used up all the time and Fort Bowie closed before we could get there. (As an aside, can you believe HH never went to a Dairy Queen, ever, before he met me? I have opened great horizons for him, that's for sure.)

Unfortunately, in all the excitement of finding this great cemetery, I neglected to take a photo of the mountains.

I am a big fan of what I call cemetery hardware: the gates, fences, latches, and general surrounds that have been in many cemeteries I've visited. Some have grand gates at the entrances and some are more pedestrian, like this one. 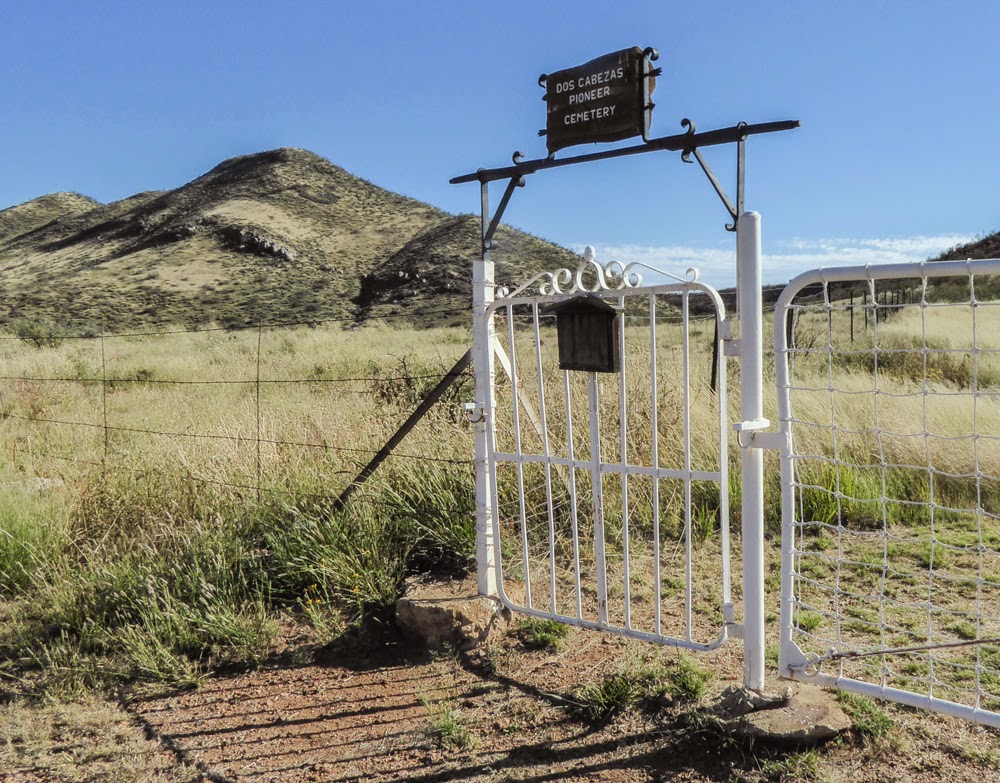 But the latch was unique. It was so different and simple that I believe I said wow with hushed reverence and played with it for a while. 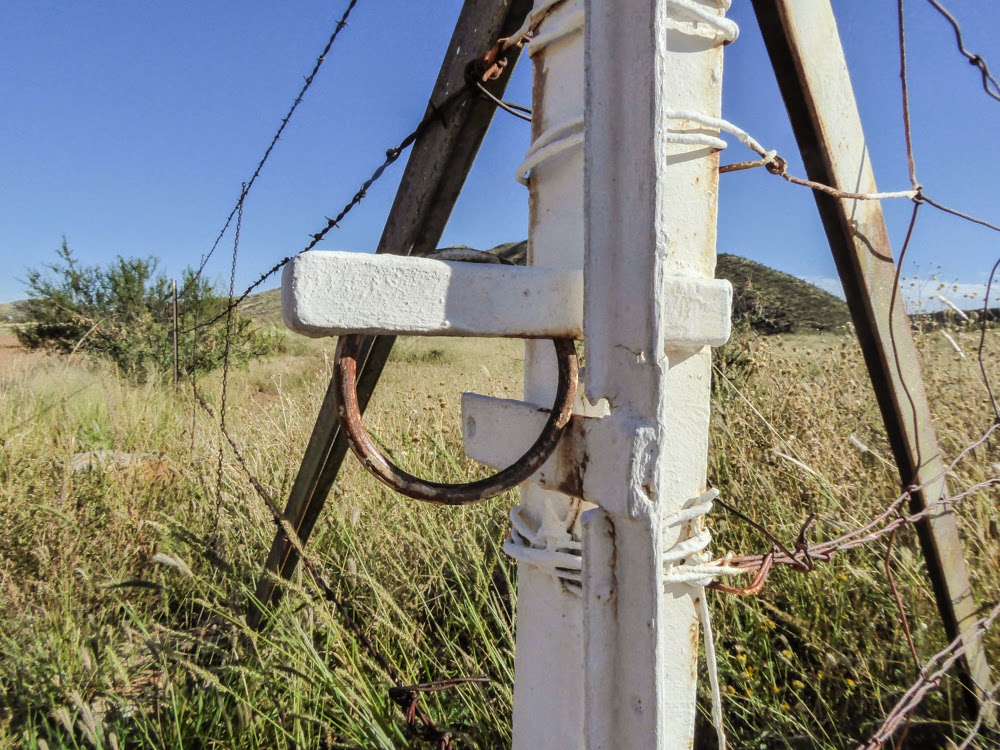 The ring rests on a short bar within the elongated donut and all it takes to open the gate is lift the ring so it clears the horizontal bar on the gate in the photo above. Genius! 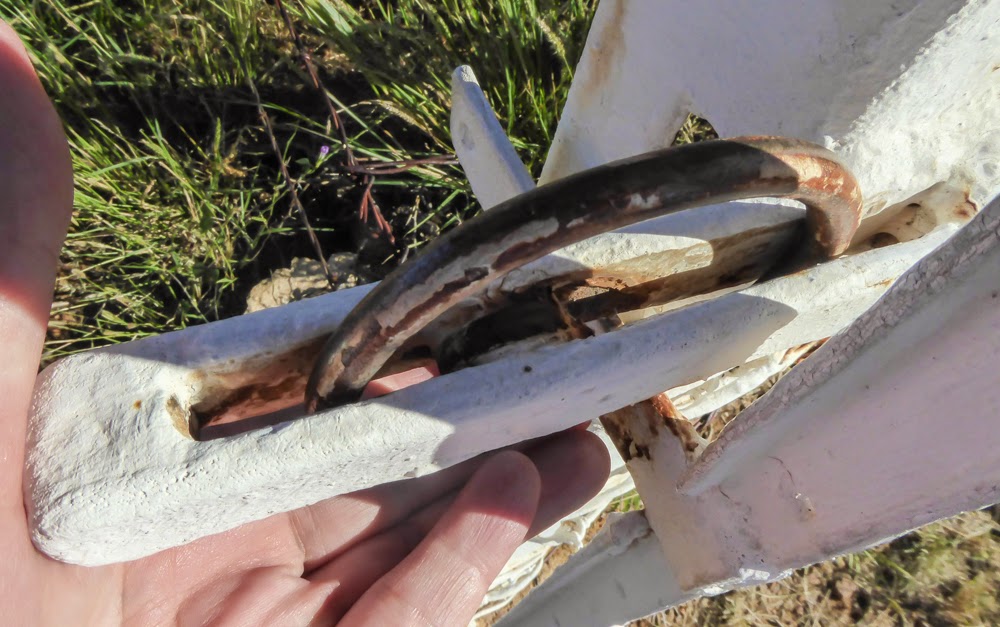 I surveyed the grounds, not really looking forward to blazing a path through the knee-high grass, thinking only of snakes, but what the heck? 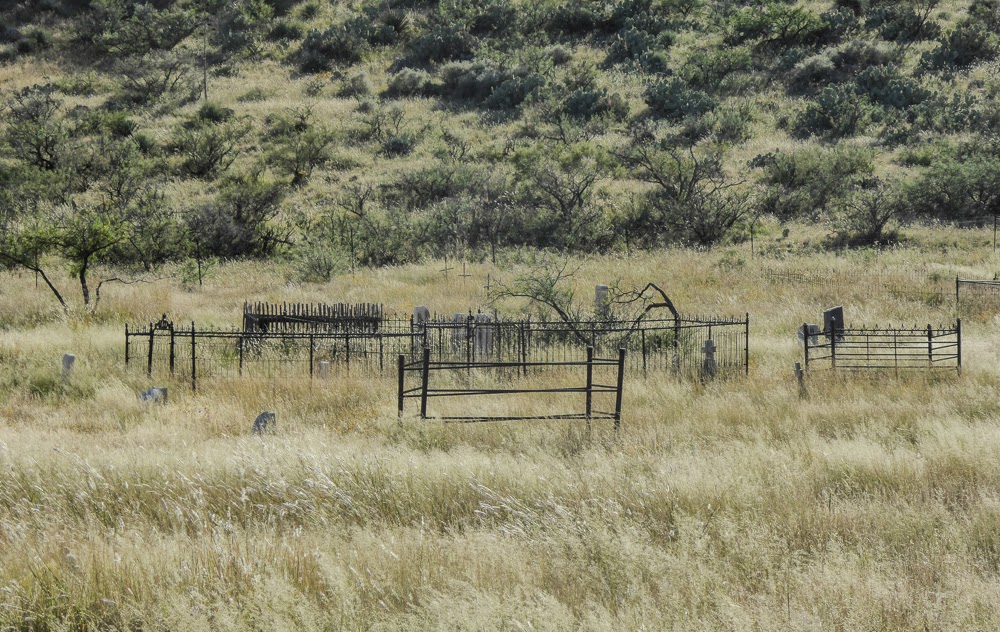 Harken back with me - bear with me now while I go off on a tangent - more than fifty years. When I was a girl I remember being scandalized, because we never said bad words at home, by a framed poem my Aunt Marge had on the wall in her house .

So I said damn! and looked and listened at every step for snakes as I made my way around the more or less acre-sized site. 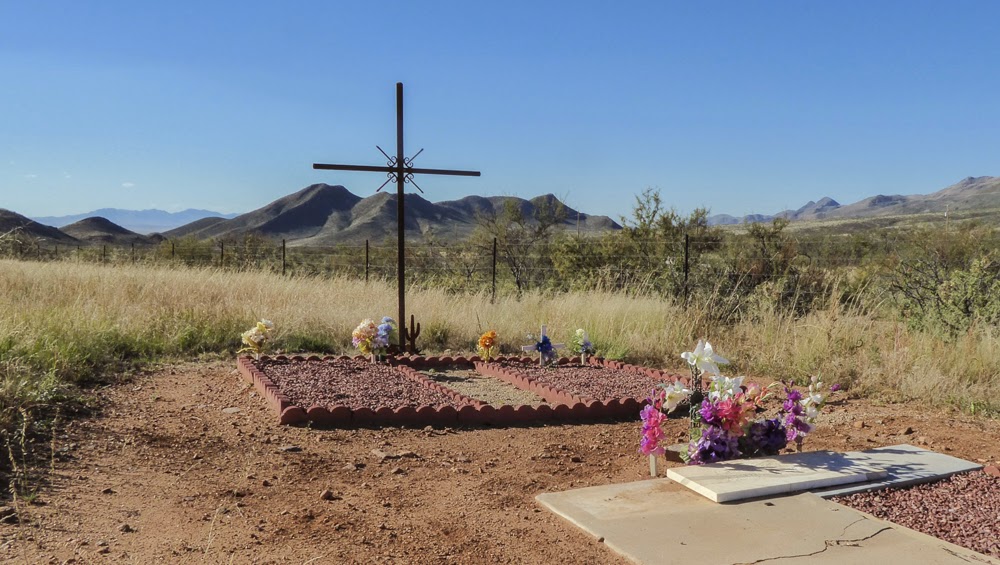 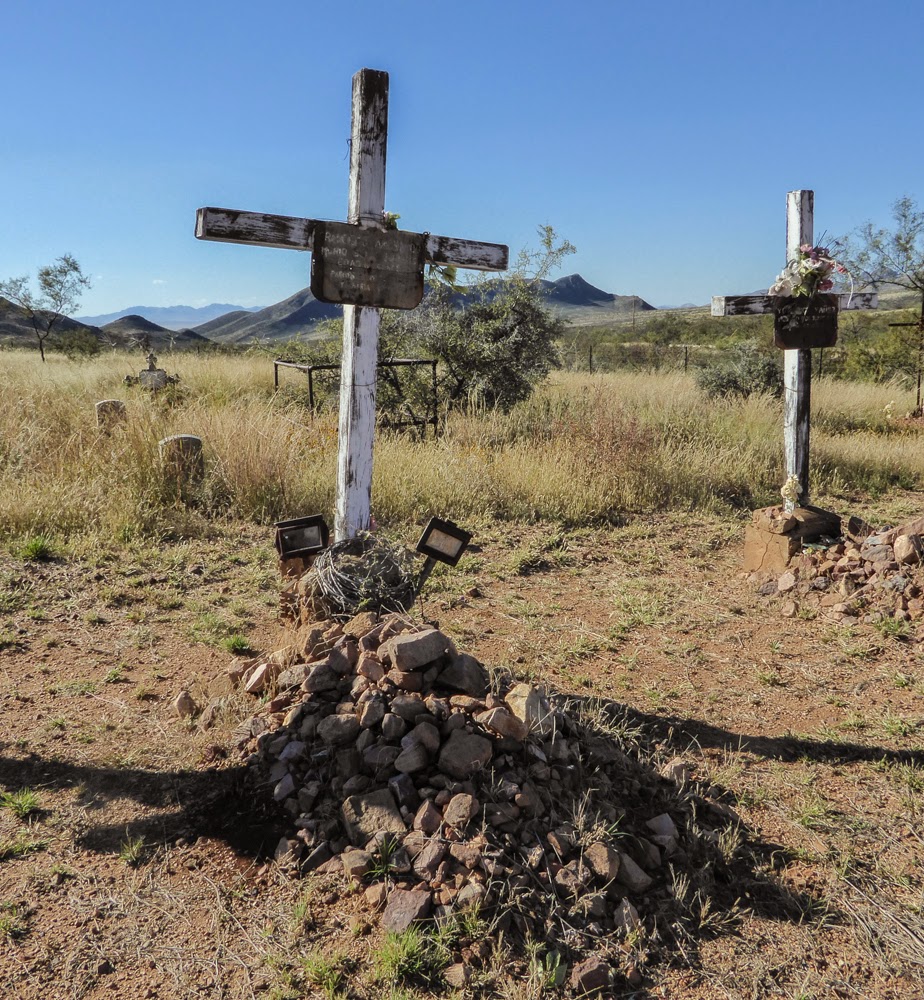 There were some wide swaths cut through the grass but they didn't go far. Most of the graves were overgrown like this. 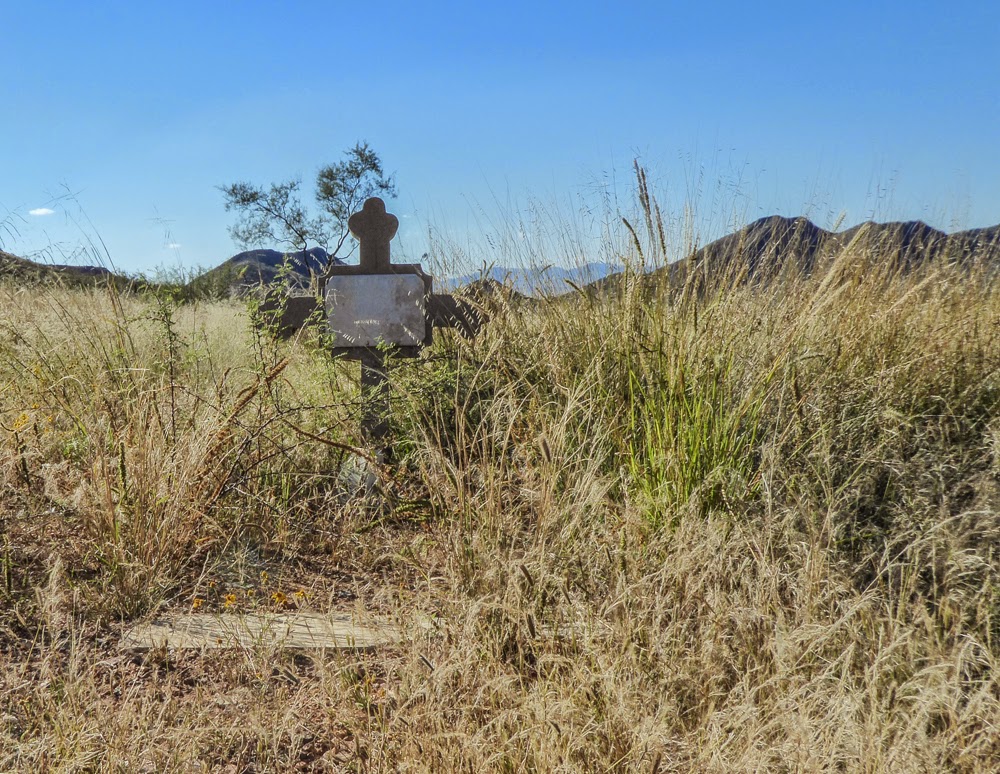 If there was a gravestone inside this fence, it was buried under the shrub on the right. 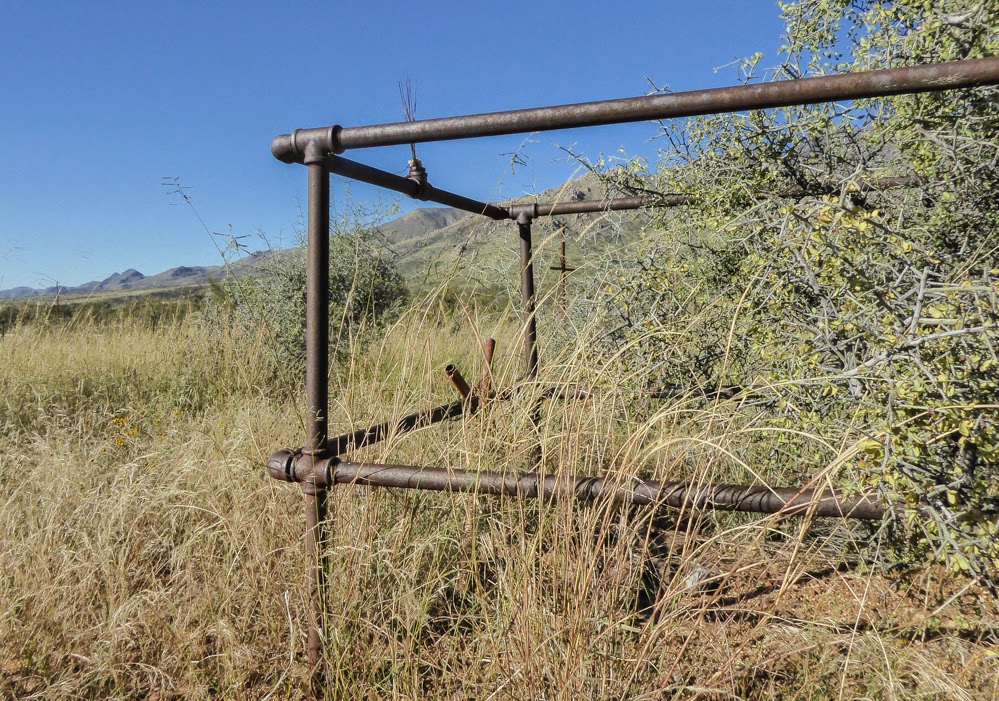 This view sums up my image of the old wild west. Crooked wooden crosses, rocks piled on top, a wide blue sky, and lonely, rugged mountains as a backdrop.

A trefoil-adorned iron fence acquires more character as it rusts. 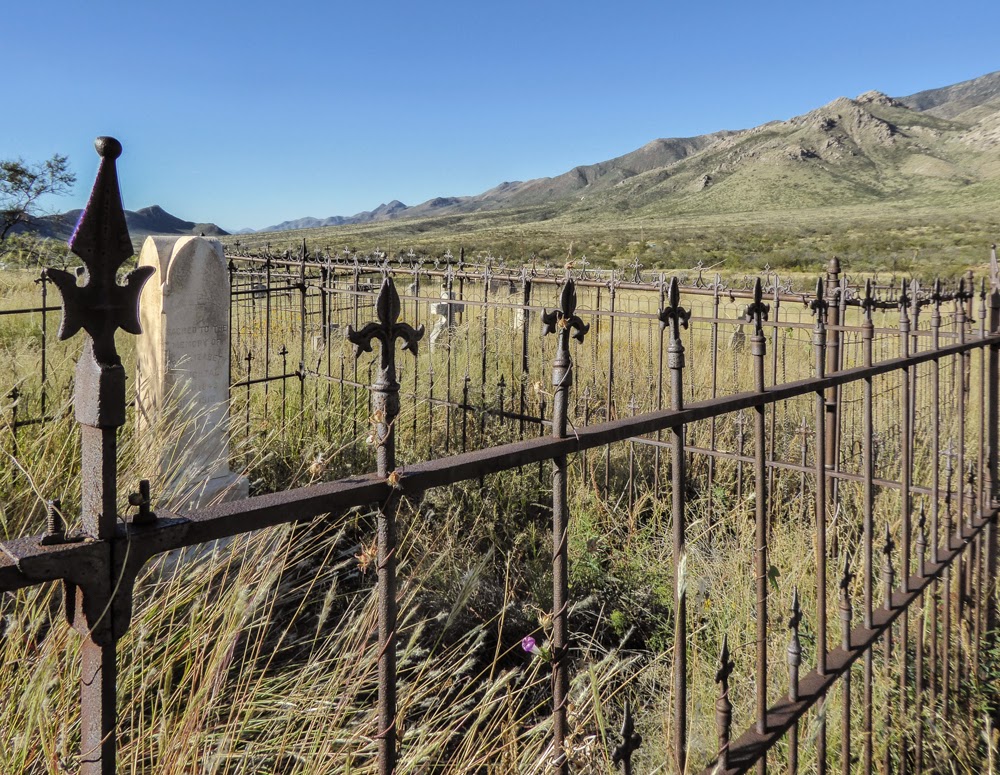 A different version is more delicate with its curved lines and open shapes, but this is just the top rail. 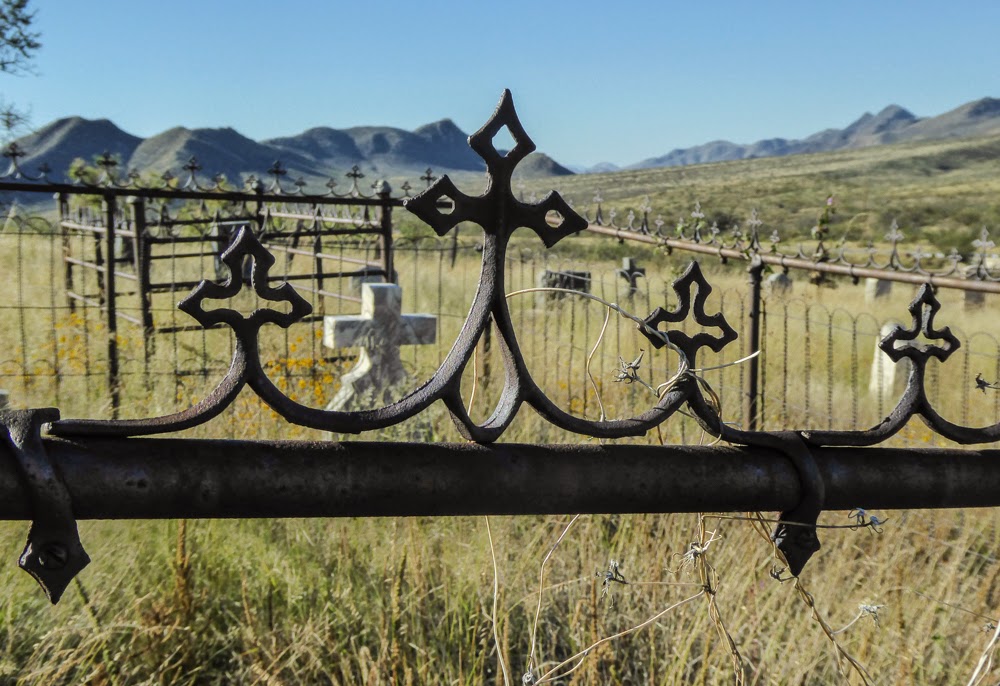 The gate looks like it belongs to a different grave site. 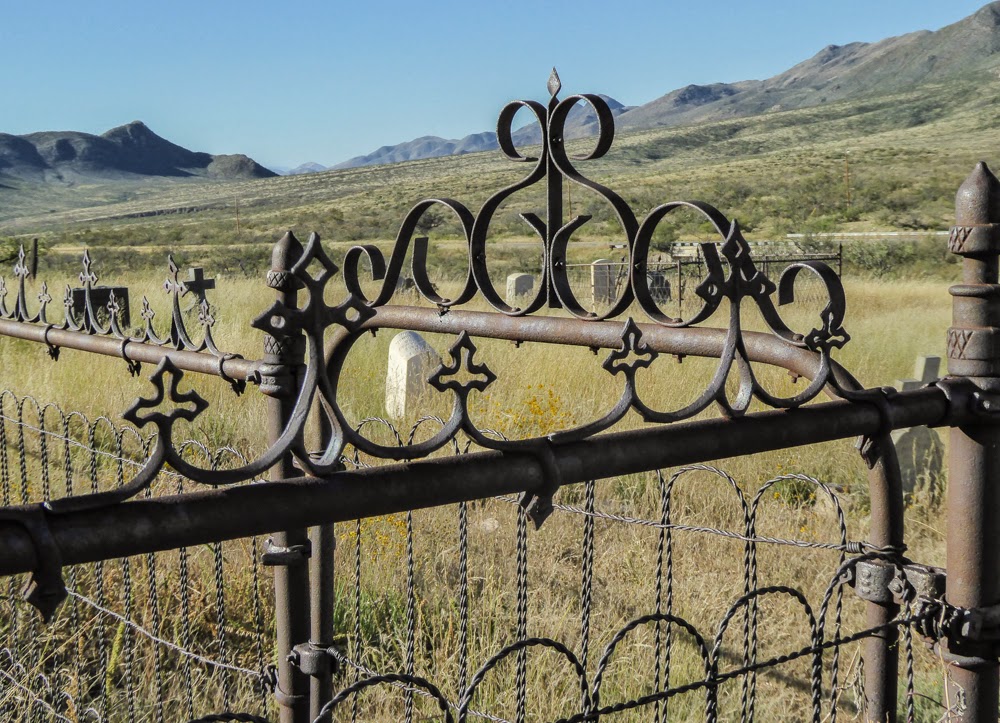 The graceful, slender, curved lines continue on the fence, but in a third style altogether, casting a soft shadow on the stone. 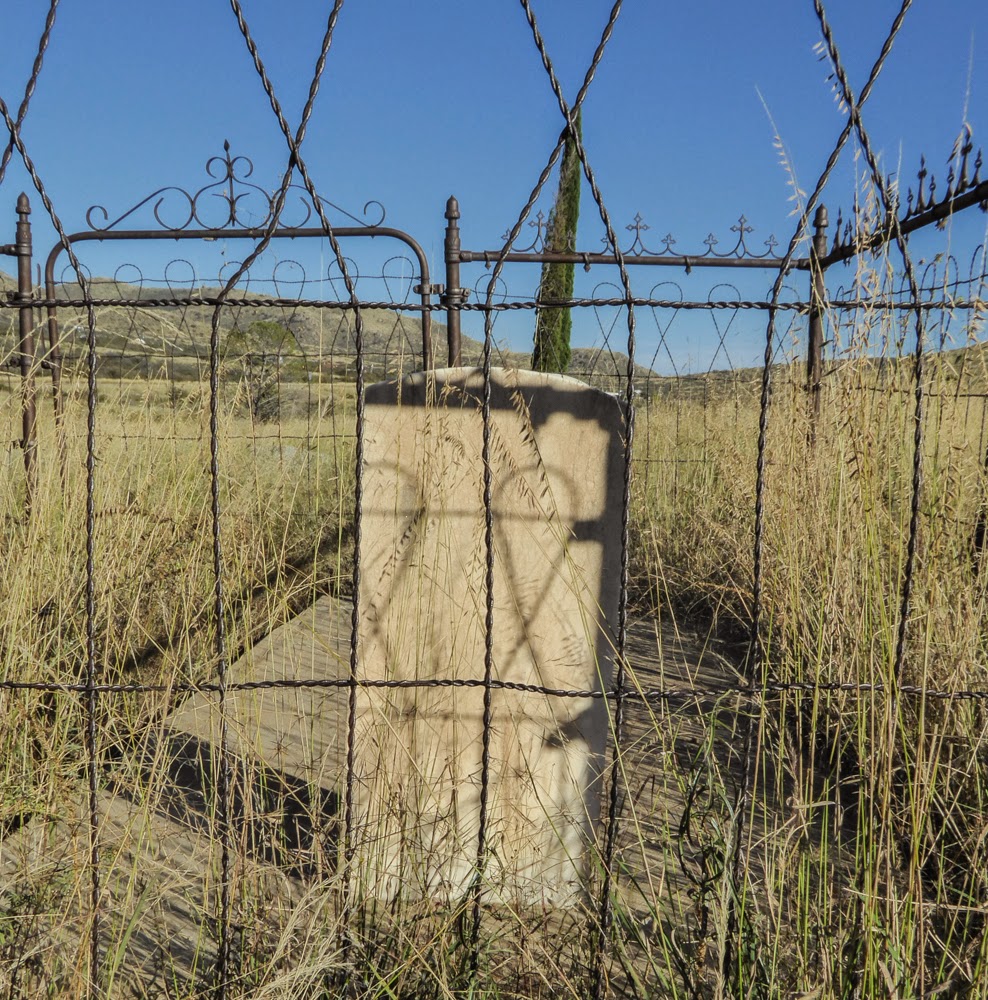 Let's just say William, below, came to the Arizona Territory in the 1850s as a member of a commission working on boundary lines between the United States and Mexico; Dos Cabezas served as the commission's home base.  Or maybe he was a Pony Express rider; they stopped here to change mounts en route from El Paso to Tucson.

The Apaches were on the literal warpath during that time. In 1857 a stage station was built by the San Antonio and San Diego Stage Lines (Butterfield-Overland), but by 1861 when Fort Bowie was established, the station had been destroyed by the Apaches. I don't know who he was or what he did, but do know that it would take a love of adventure or a sense of desperation to come to a place like this in the middle of the 19th century. 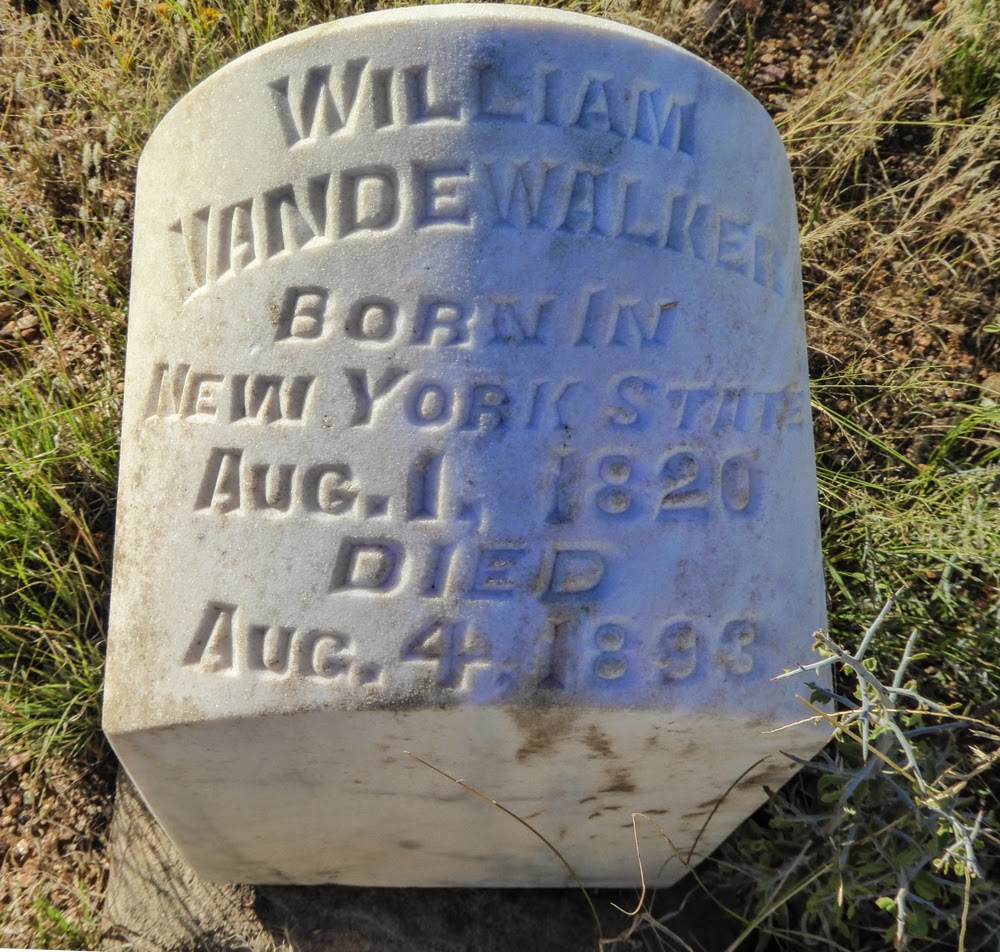 It seems as though the front section of this stone, with the name and dates, was the original and was later set into another slab for strength. The rosary and decorations on the right side are glass. 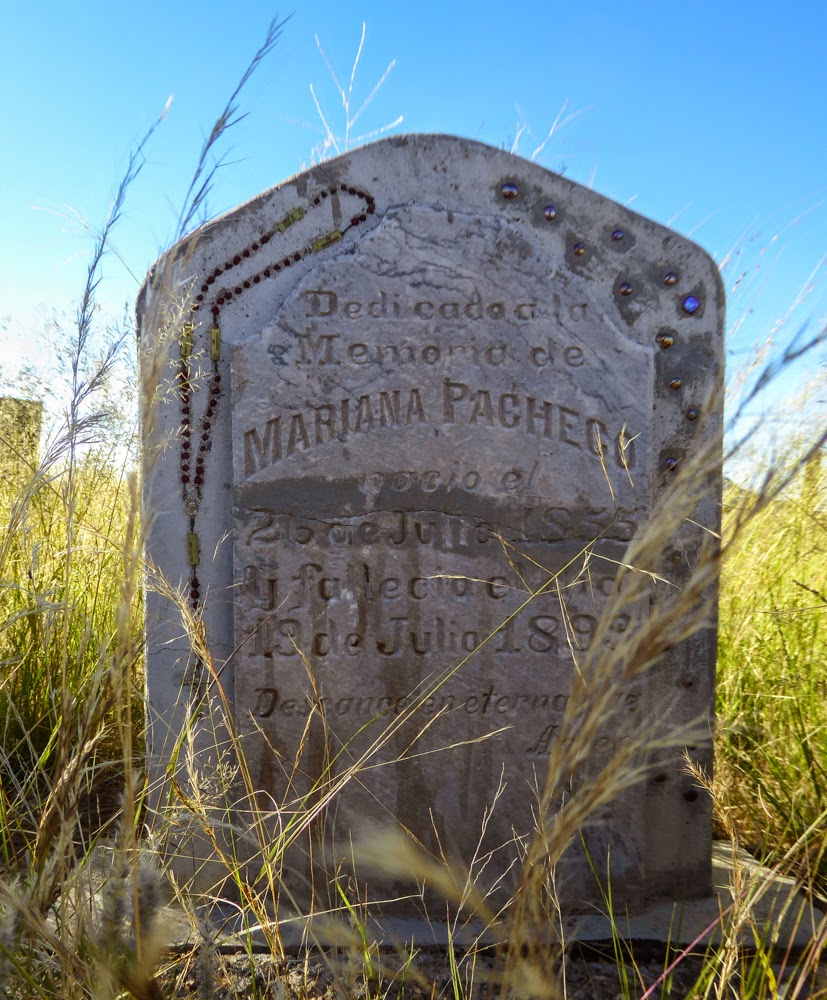 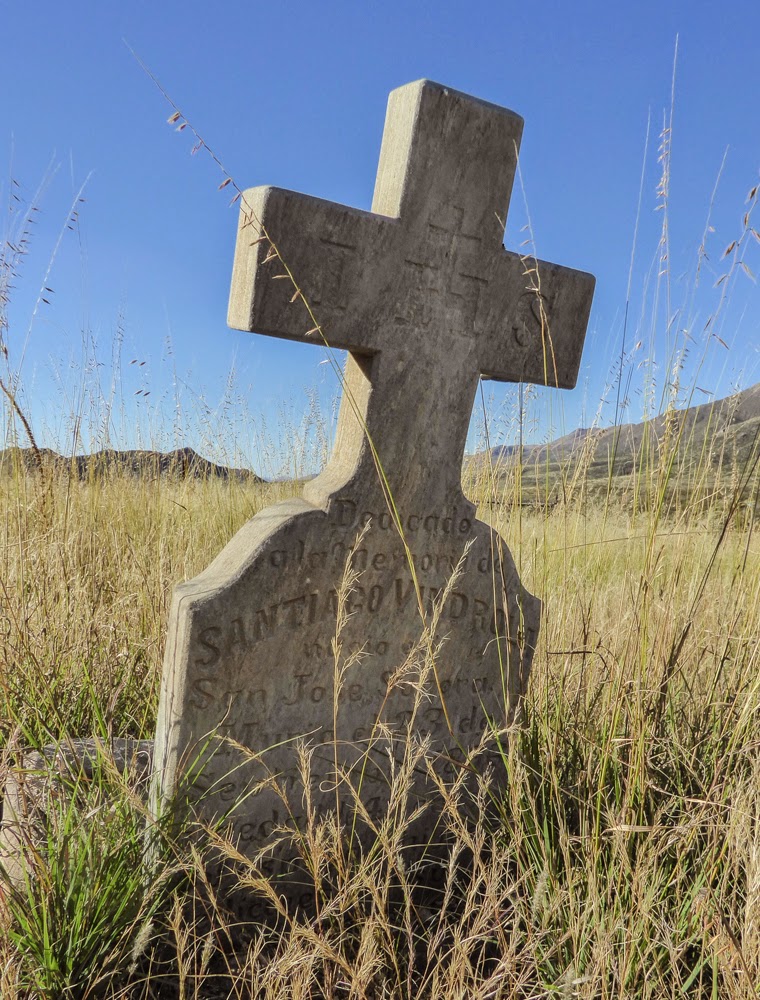 I did not go out to these plots but photographed them from a distance. 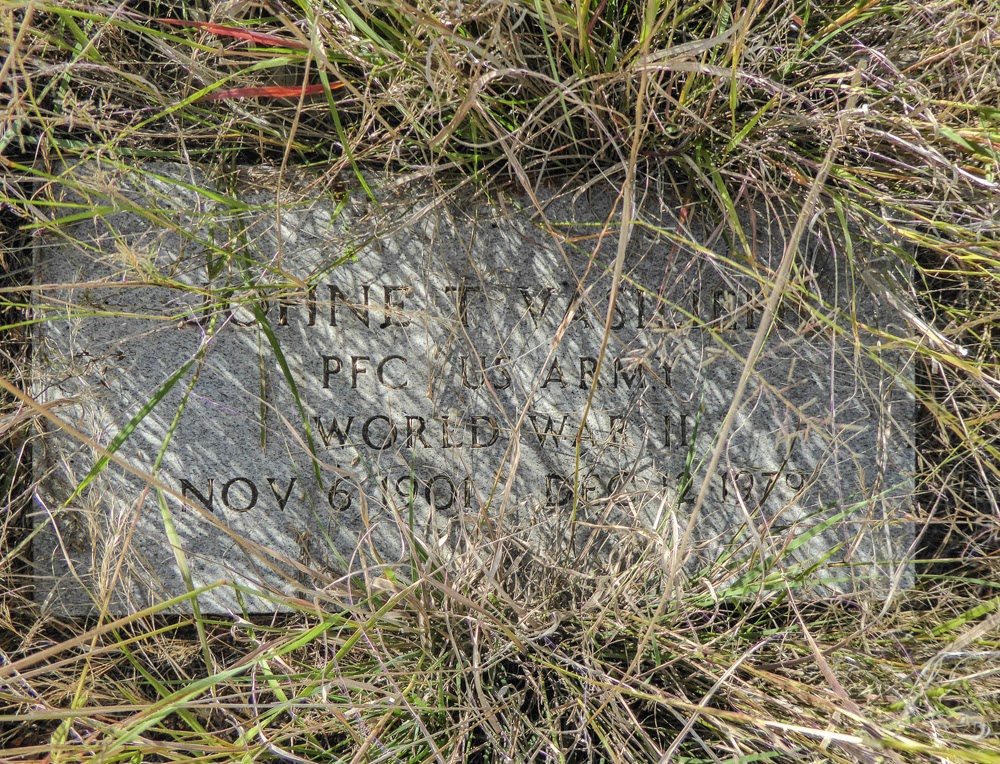 I've seen Woodmen markers all over the country. It's a fraternal organization that operates a privately held insurance company for its members. One of the benefits of membership was a headstone in the shape of a tree stump bearing the logo of the Woodmen of the World, but that practice was abandoned in the 1920s due to the cost. 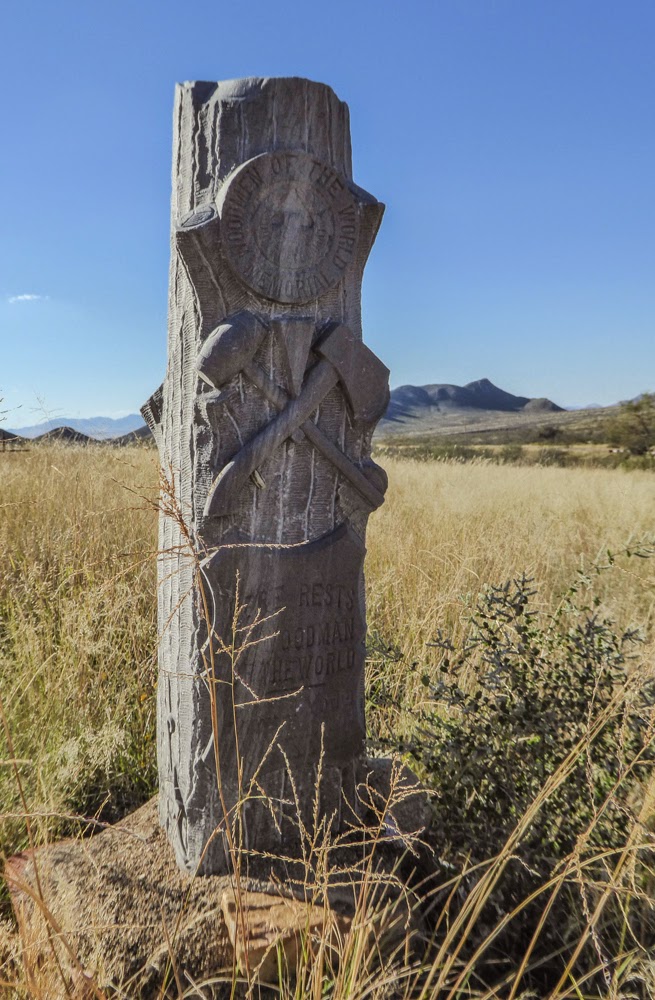 Another overgrown grave but not forgotten. Who would still be putting flowers here after more than 90 years? 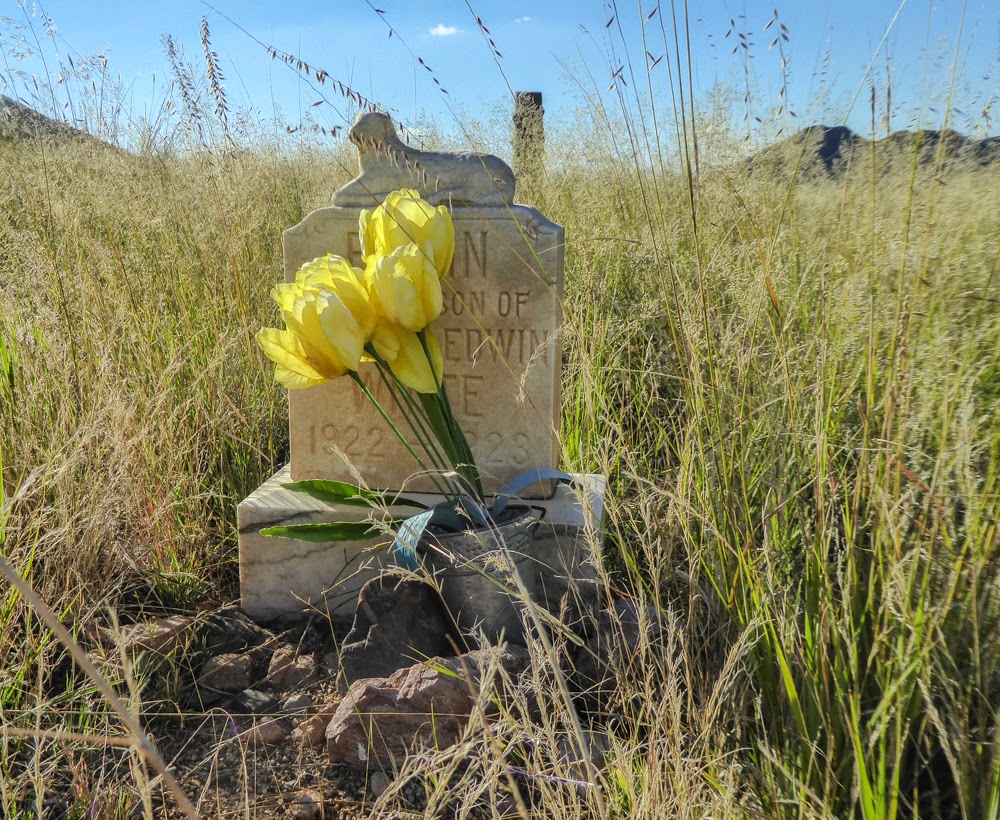 A spare, handmade wire cross is almost lost in the tall grass. There's nothing else to say who lies there. 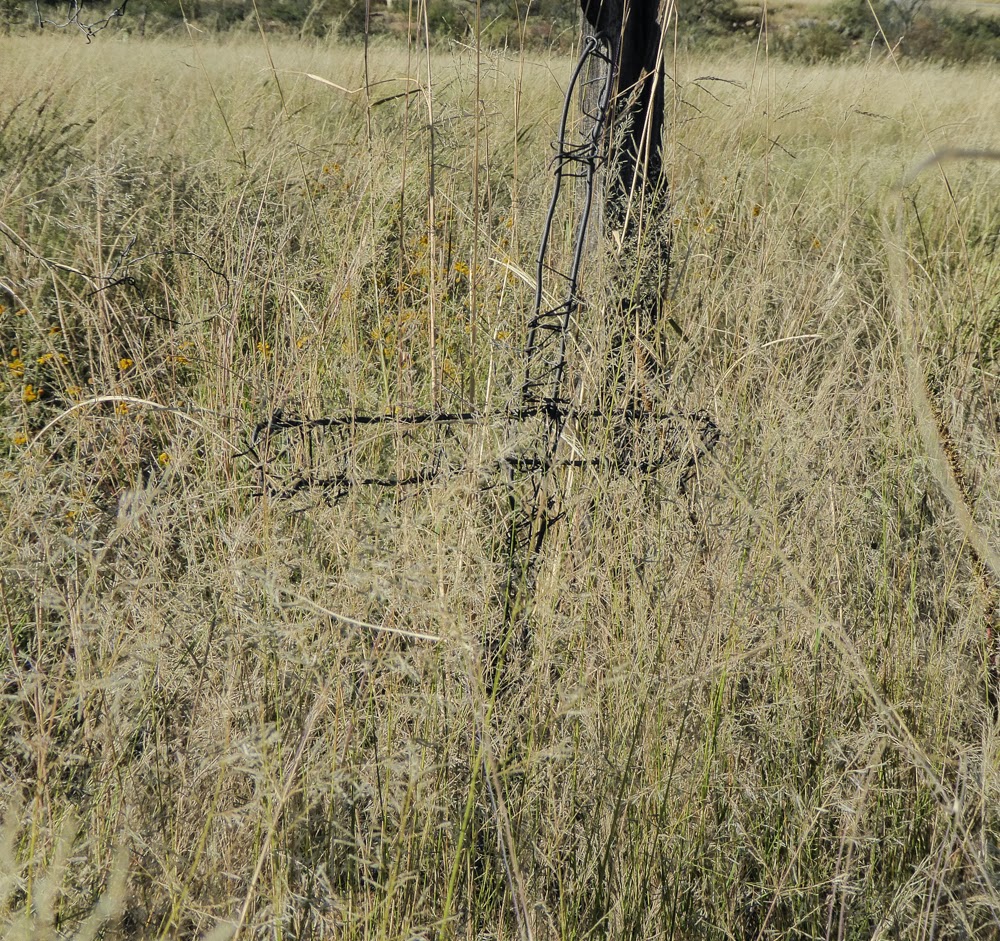 There were no snakes but there is a devil grass here that grows in abundance. Ten minutes in and I was stopping to pick needle-like slivers out of my socks. I was limping as I made my way back to the car. The grass had worked its way in through the mesh of my sneakers and through my socks to my feet. I'm convinced that it would embed itself in my skin if I didn't remove every speck of it. All the way to Dairy Queen I was picking grass out of my shoes, inside and out. What I need for this kind of outing is leather boots and leather gaiters. Time for some shopping because a cemetery like this should never be passed by.