The vastness of place

This post was supposed to be up yesterday - HH will back me up on this - but the internet is a fickle fiend. We have problems almost everywhere we go, and I guess it could be said that it's the price we pay to live in God's big acres, but I love me my internet and it makes me crazy when it's not working better than dial-up or when it's not working at all.

Last weekend we took our first field trip, to an intriguing place called Scotty's Castle, and those photos will be up in the next post if I can get them uploaded. Here, though, are some images of the landscape near us.

I tried walking along the main road for my almost-daily constitutional but there's too much traffic on Highway 190 to make it safe. The park gets a million visitors a year, a figure hard to comprehend when you look out over the vast land and see no one, but they have to come in on one of the roads and 190 is the main drag. I gave up that route after being forced to the uneven, rocky shoulder too many times, and found there's a nice, uphill route right near my house.

We live in the Cow Creek area, which is a few miles from Furnace Creek, where the fancy Furnace Creek Inn is. Above us are the Resource Management offices, the CalTrans maintenance yard, and some employee housing. This photo shows some of the housing on a day the sun finally came out. I stopped to take the photo mostly so I could catch my breath, because even though we're at sea level, it's a mighty hill to climb.

I think these are the Amargosa Range mountains. 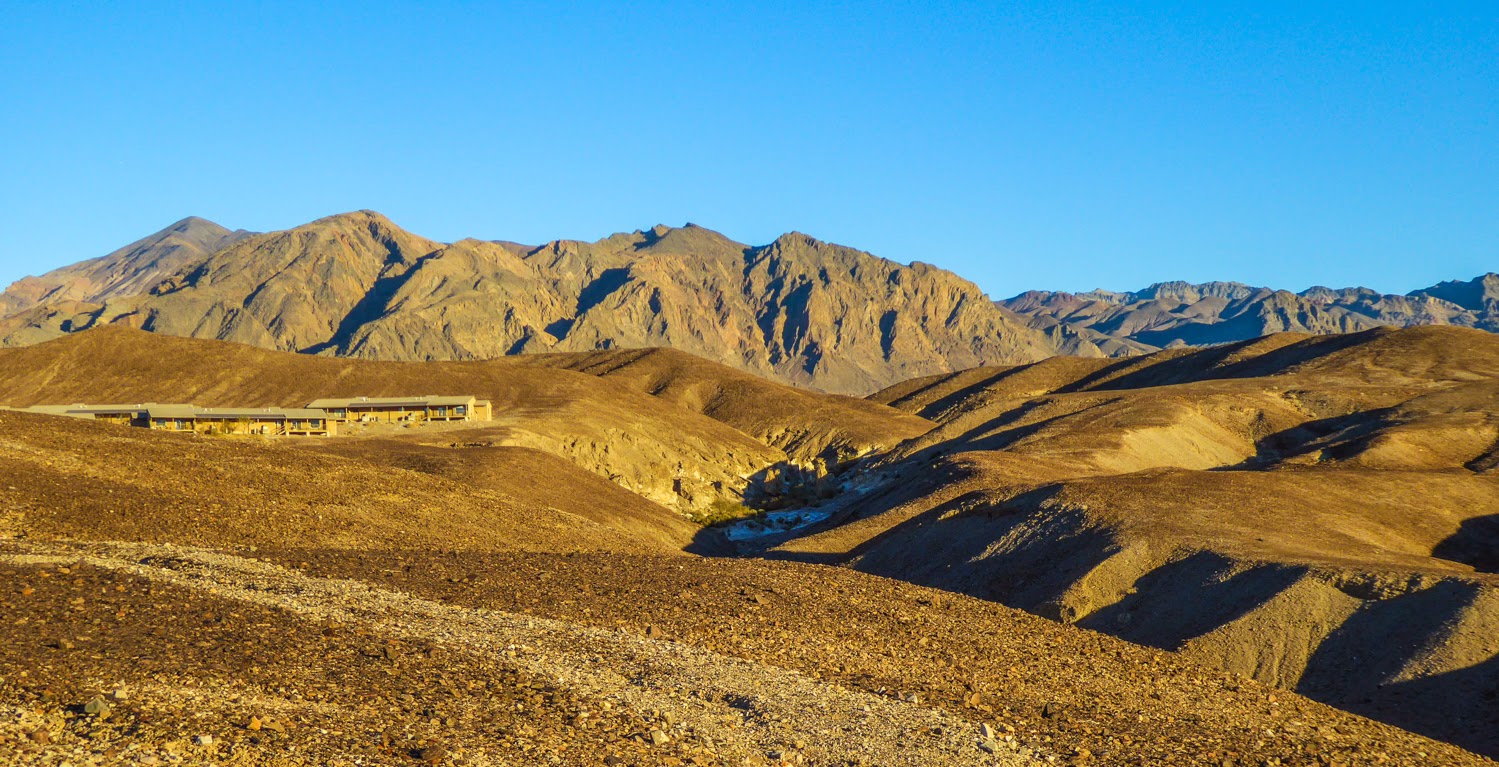 To the north are more arroyos, more mountains, more color. 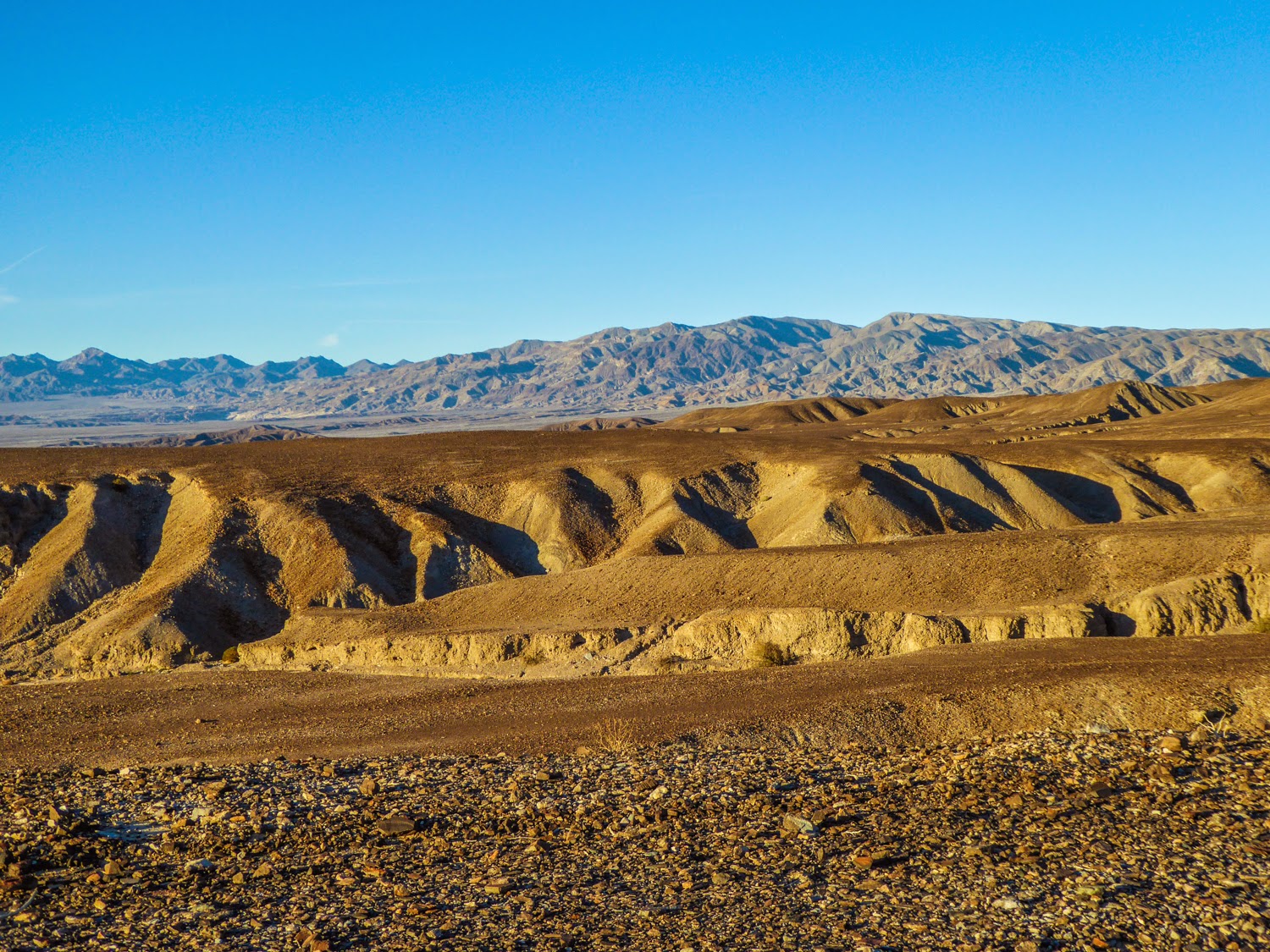 The road continues to go up in a loop through housing. It's a lovely moment when it finally starts its descent and I always think, at that moment, that it's not such a bad climb after all.

This is on the way down the hill, looking northwest across the salt flats. The flats are miles and miles long; this view is about 25 miles north of Badwater Basin that I wrote about last time. To give an idea of the vastness of this place, look for a whitish speck just below where the blue changes to brown, about halfway between the shrubbery on the left and right. That's a car.

Yesterday we started a drive out to Mesquite Flat Sand Dunes but didn't make it. It's not that we got lost, but that we didn't know where we were going. There's a difference. I was sure I'd seen the sign on the road to Scotty's Castle but it had disappeared and after burning about $15 worth of diesel we gave up and went home. It turns out that the dunes are on the road we first went down but backtracked on because we thought it was the wrong road. Oh, cruel irony.


It was a beautiful, sunshiny day even though wind was howling and buffeting the house, raising sand that nearly obscured the Panamint Mountains later in the day. This photo was shot after we turned around the second time, as beautiful as it was miserable to be out in.

We're going to give it another shot today, armed with - aha!! - a map.

Our kitchen window looks to the west and the first hint I had that the spectacularity below was beginning, a few days ago, was a glow on our neighbors' rigs seen through that window. This made the dreary clouds we experienced for several days almost insignificant.

=======
Thought of the day:
(This refers to Space, as in Sky, Universe, &c., but also aptly describes Death Valley.)
Space is big. Really big. You just won’t believe how vastly, hugely, mind-bogglingly big it is. I mean you may think it’s a long walk down the road to the chemist, but that’s just peanuts to space. - Douglas Adams, The Hitchhiker's Guide to the Galaxy
at 8:55 AM