And more to the point, the damn internet here. But I digress.

When HH and I made the trip to Boulder City, Nevada a few weeks ago to see the dam, we wanted to take both tours offered - the workings of the dam and inside the dam itself. It was packed with people that day and all the inside-the-dam tickets were gone but we were still able to take the other tour. We have to stop going places on Saturday.

First we had to run the gauntlet of security, emptying pockets and going through a metal detector. HH lost his pocket knife, like he's going to overpower someone with a 2-inch blade, then, because of metal body parts, got his thrill of the day with a pat down.

There were signs of no food! no drink! but I defiantly finished my Jolly Rancher right under the nose of the ticket seller and even got the Senior price when I told her I was within shouting distance of 62.

Next, we were herded into a queue to wait for an elevator, and when it appeared we were ordered into it with instructions given in the bored and exasperated tones of someone who's said them 27 times that day, to line up side by side and don't leave spaces. It was a lesson in sardine-ism. Gosh, it was all the pleasures of flying and cost a fraction of the price!

Disclosure: any information in this post that sounds remotely intelligent and knowledgeable is from HH, Wikipedia, or the Bureau of Reclamation's website. Believe me, it's not from me.
The elevator opened into a tunnel that led to a glassed-in space that overlooks the power station.
The water rushes into the turbines, which revolve at an insane rate of speed, generating electricity in the coils which is then sent out by cable.
There are acres of terrazzo flooring here - more on that later down. The level we were on had beautiful inlaid Native American designs. It was too crowded to get any photos, though. 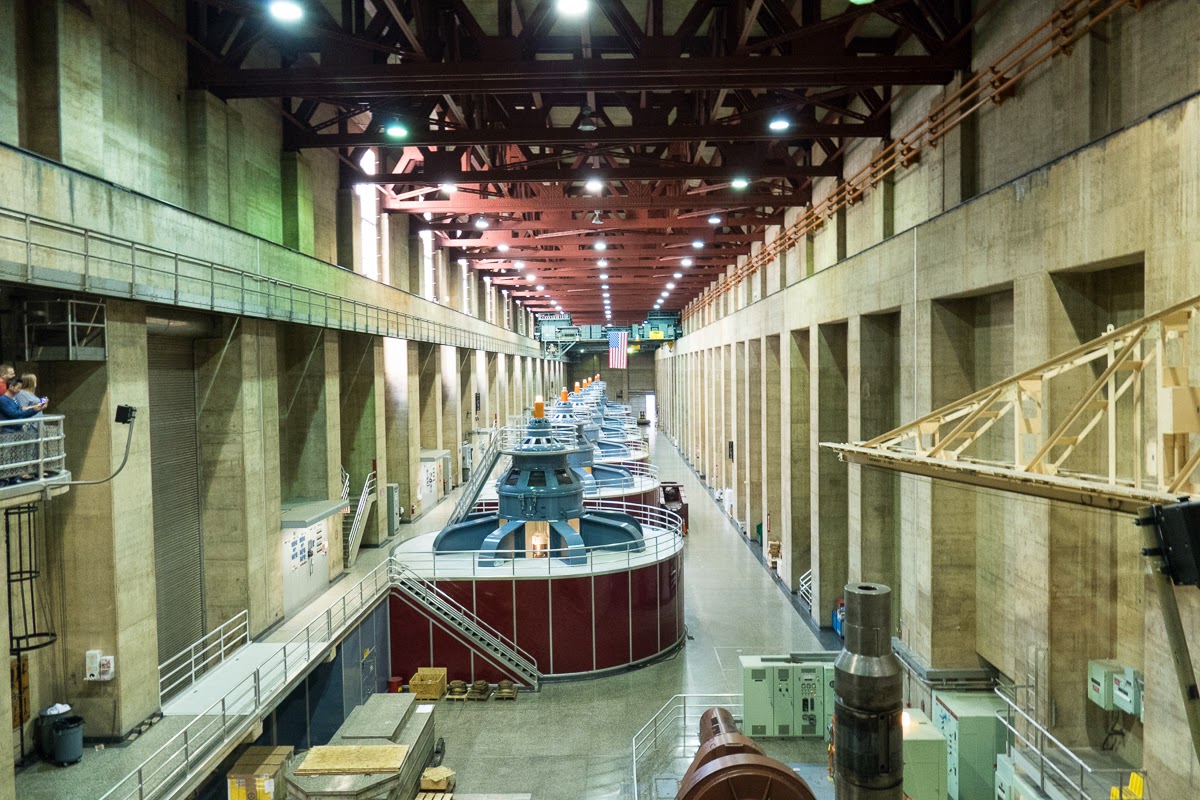 This is an armature, the central part of the dynamo that rotates within the magnetic field that comes from the red things on the cylinders in the photo above, which are magnets. It's been removed from the dynamo for repair or something. Not shown is the turbine that sits on the central shaft and which causes the armature to rotate. 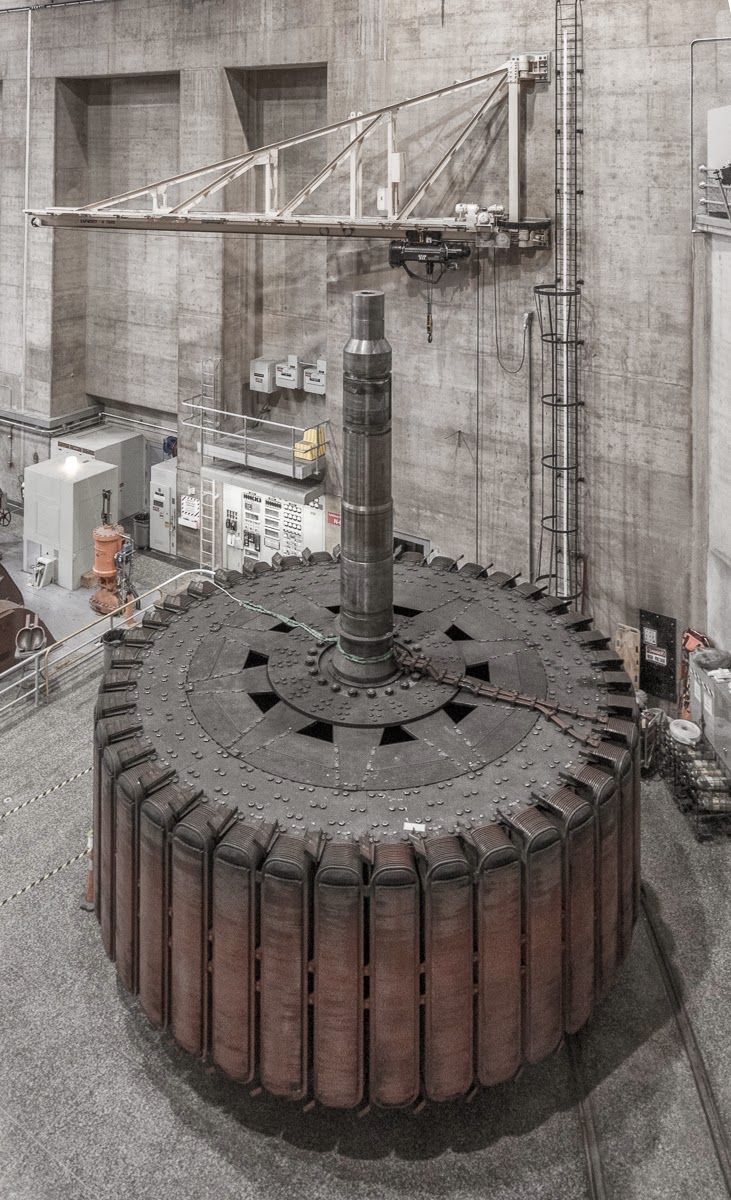 After the water works its magic of electricity, it is discharged out of pipes like this. [3/16: I have been corrected. That's an intake pipe.] That's all I know, and only because HH told me. Otherwise, I am ignorant to the utmost about things like this and don't care if I ever understand how it works. 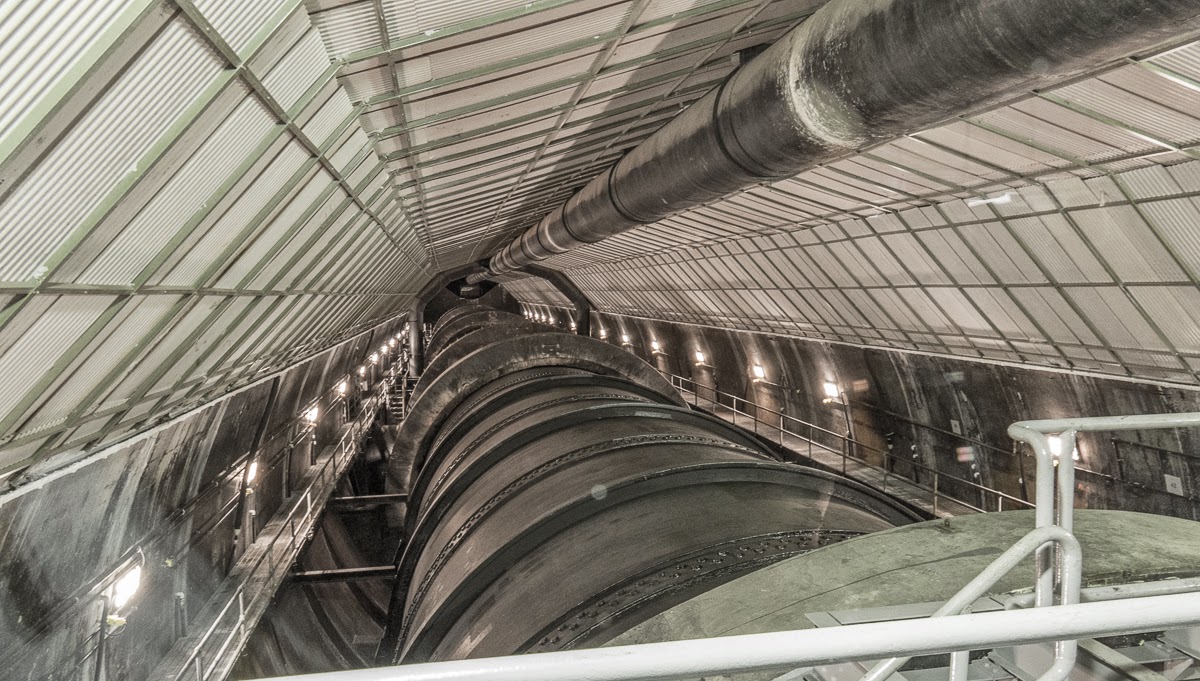 This is the building we were in, seen from the top of the dam. HH has been here and seen water spewing out between the pillars under the building but water levels are so low these days that only exactly what is needed is let through the pipes and the discharge is minimal. 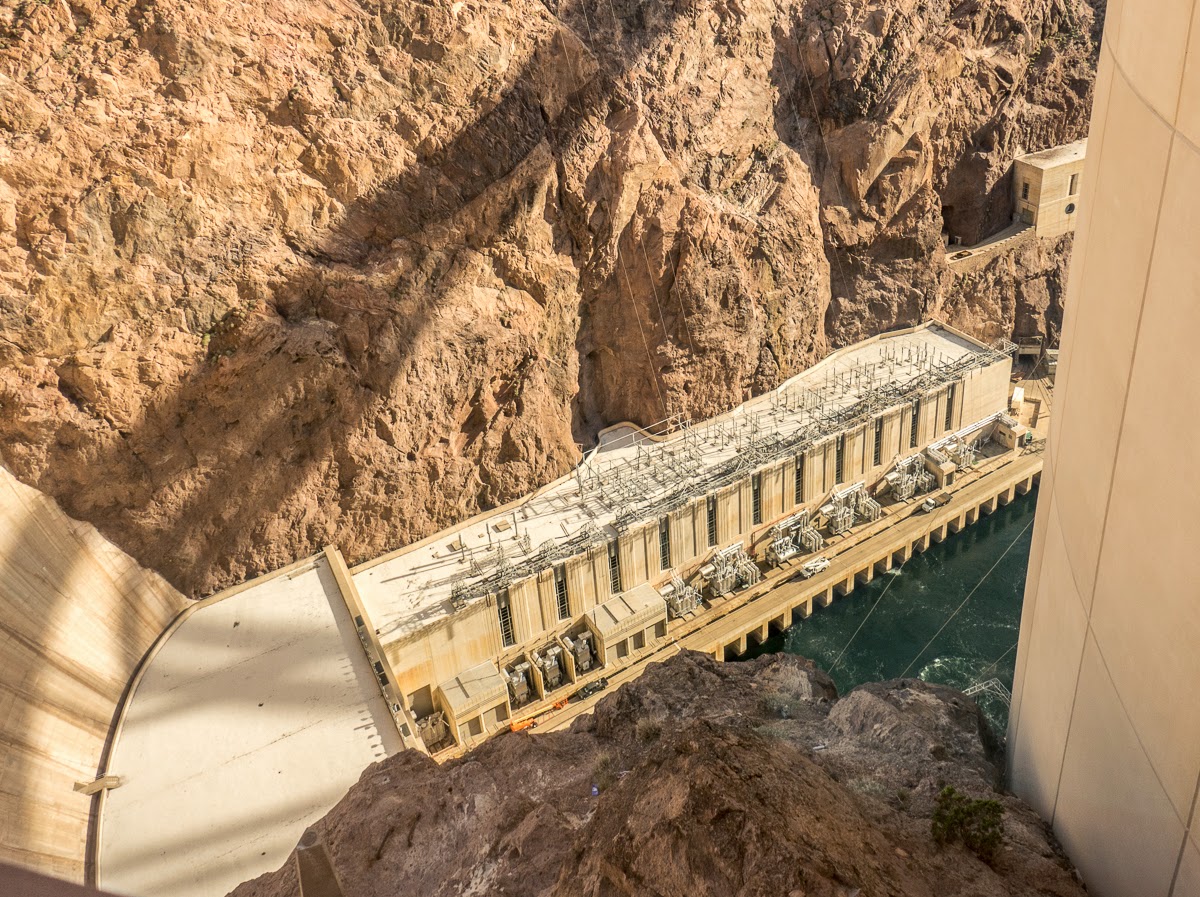 I'd heard you couldn't drive across the dam anymore, but there were plenty of cars going across. I have no idea what this bridge is for. 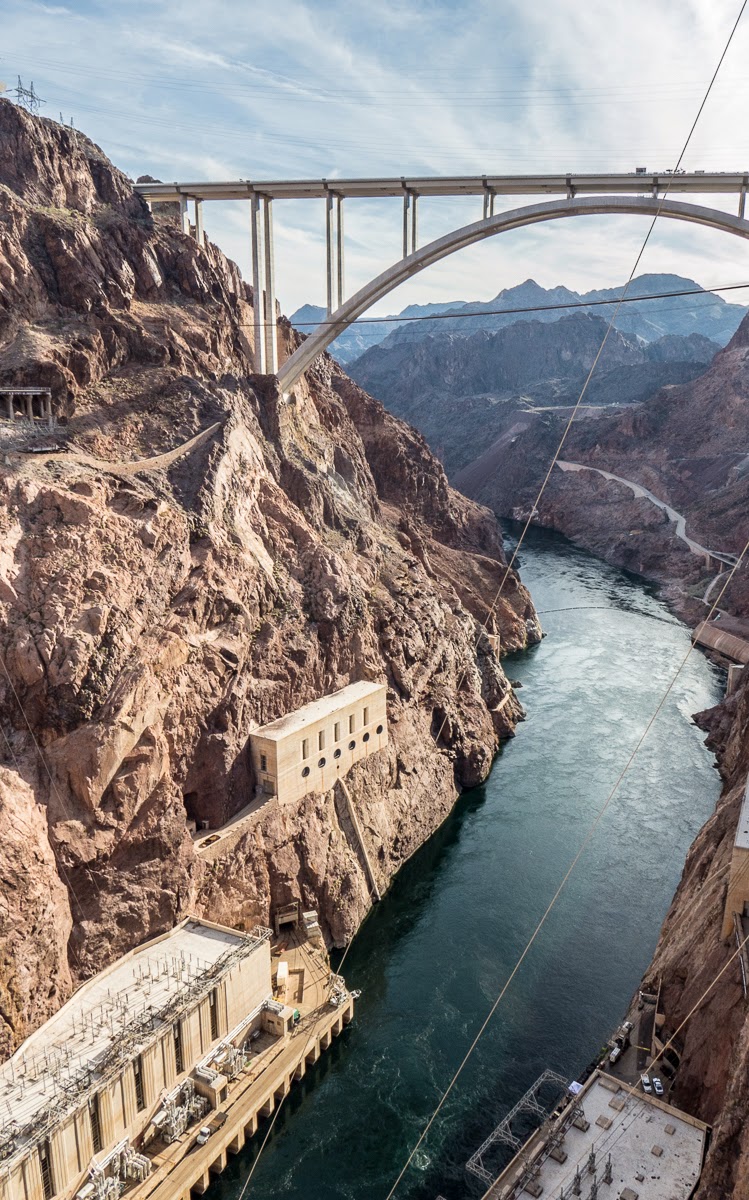 What I loved was the art deco styling throughout, including this railing in the visitor center. 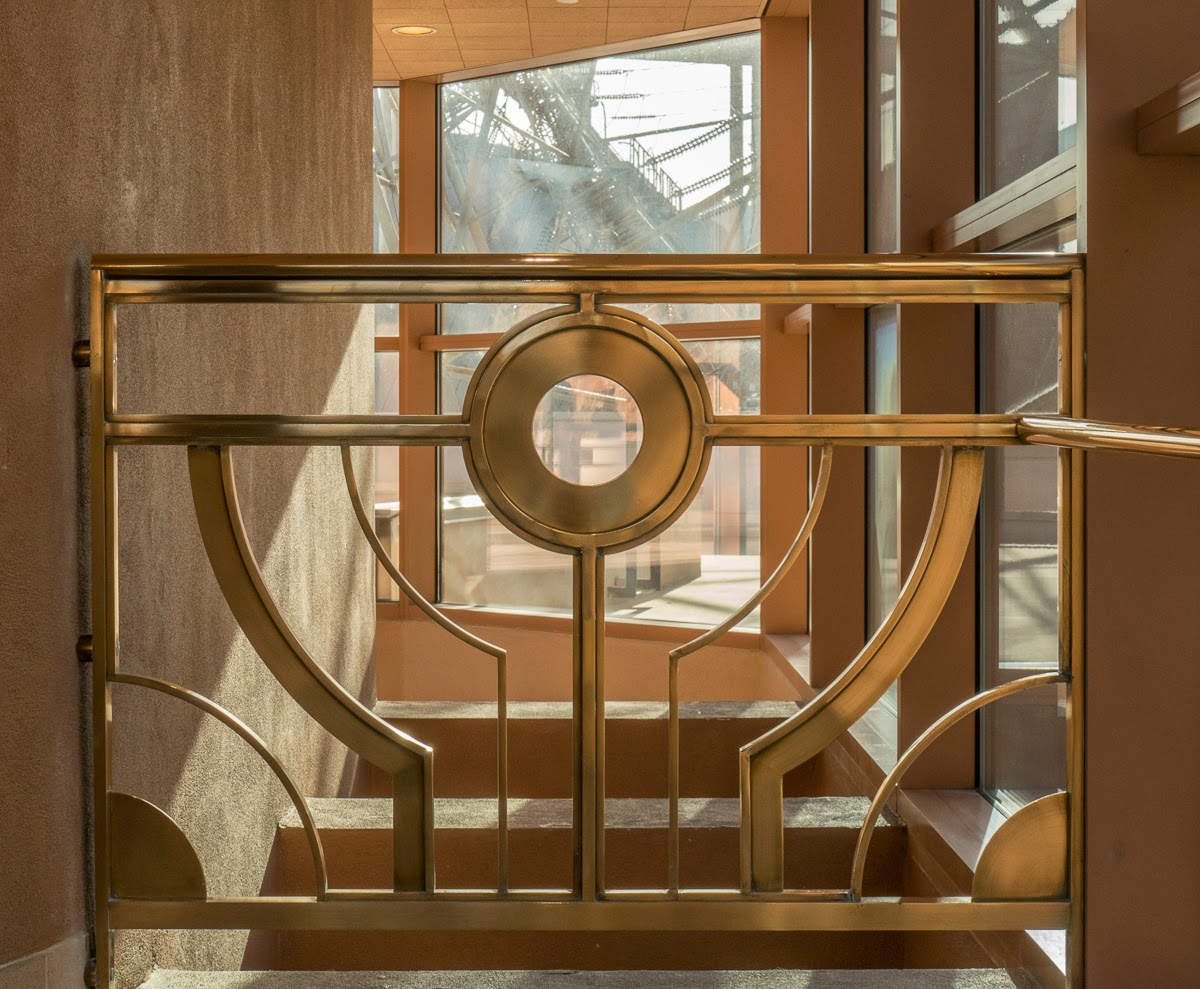 Along the top of the dam are a couple of ticket-sales windows, now out of use, and two loos. 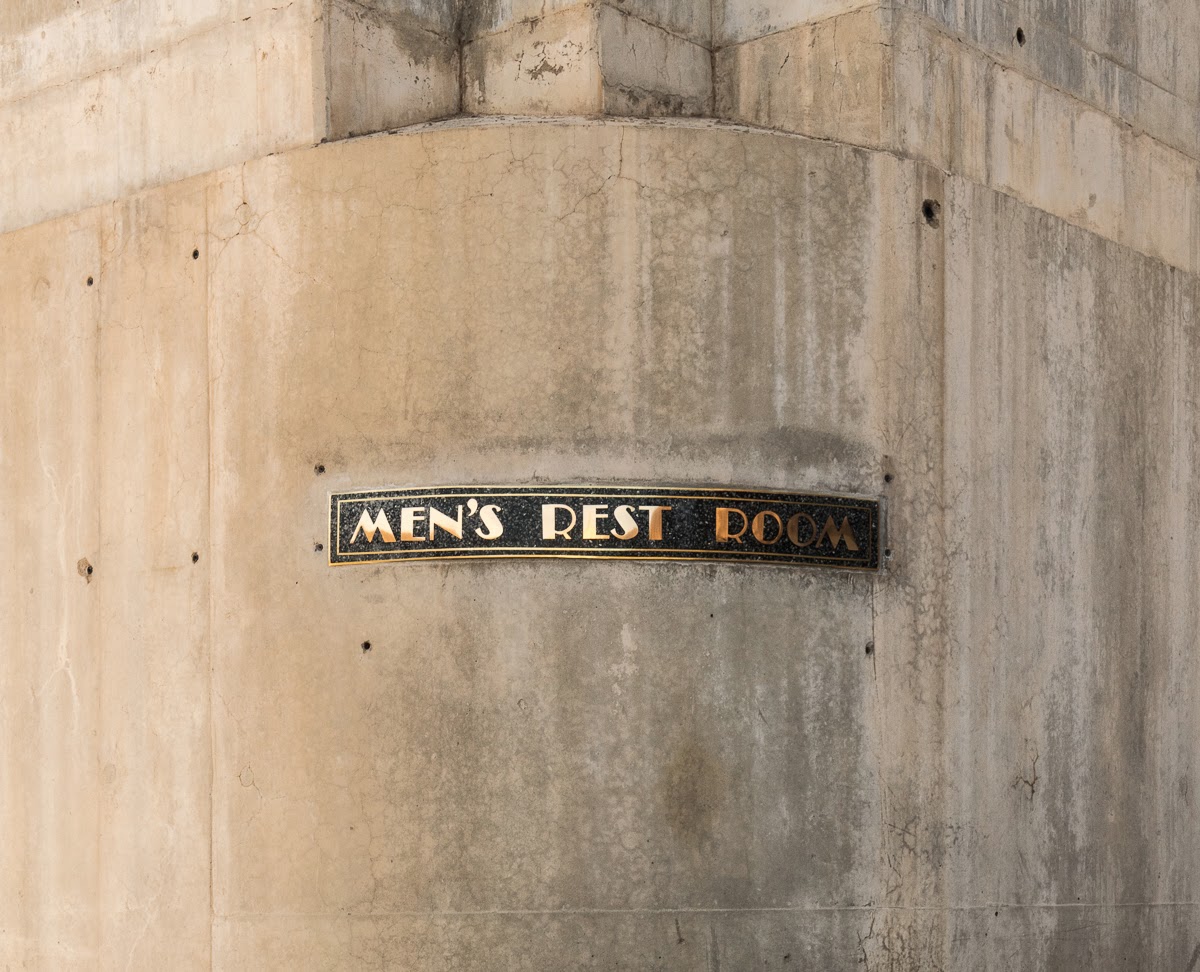 This is the lobby of the women's room. How about that color? The actual loo is upstairs. I ran up the stairs to see if it, too, was cool, but it was just a loo. 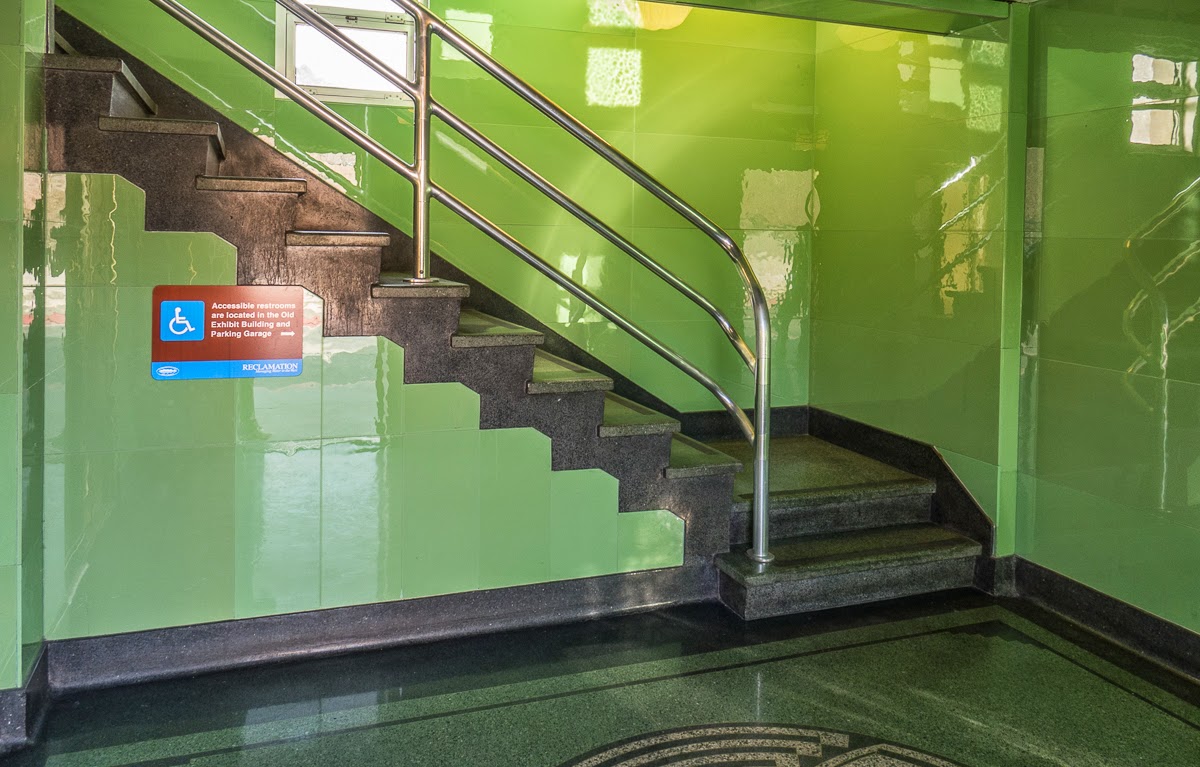 The visitor center and dam look like they're growing from the rock. 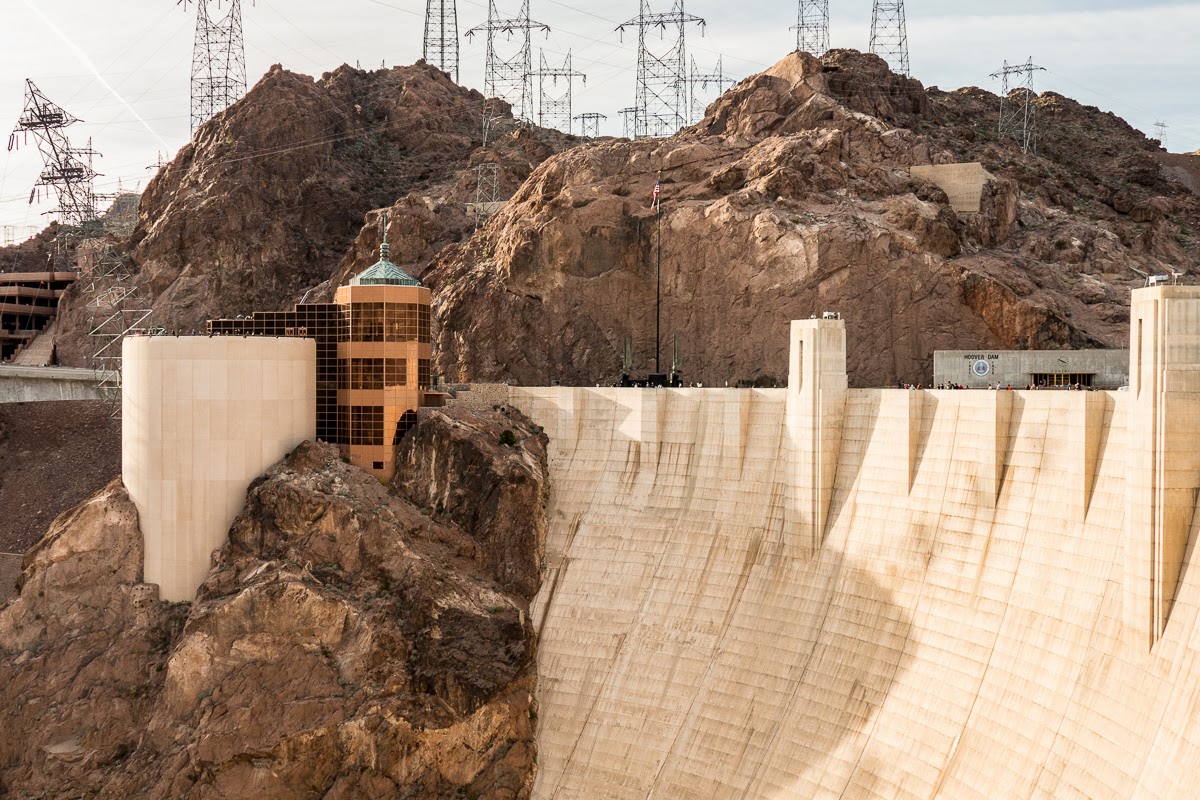 Another view of the dam. Those little towers are the two restrooms and the ticket offices. 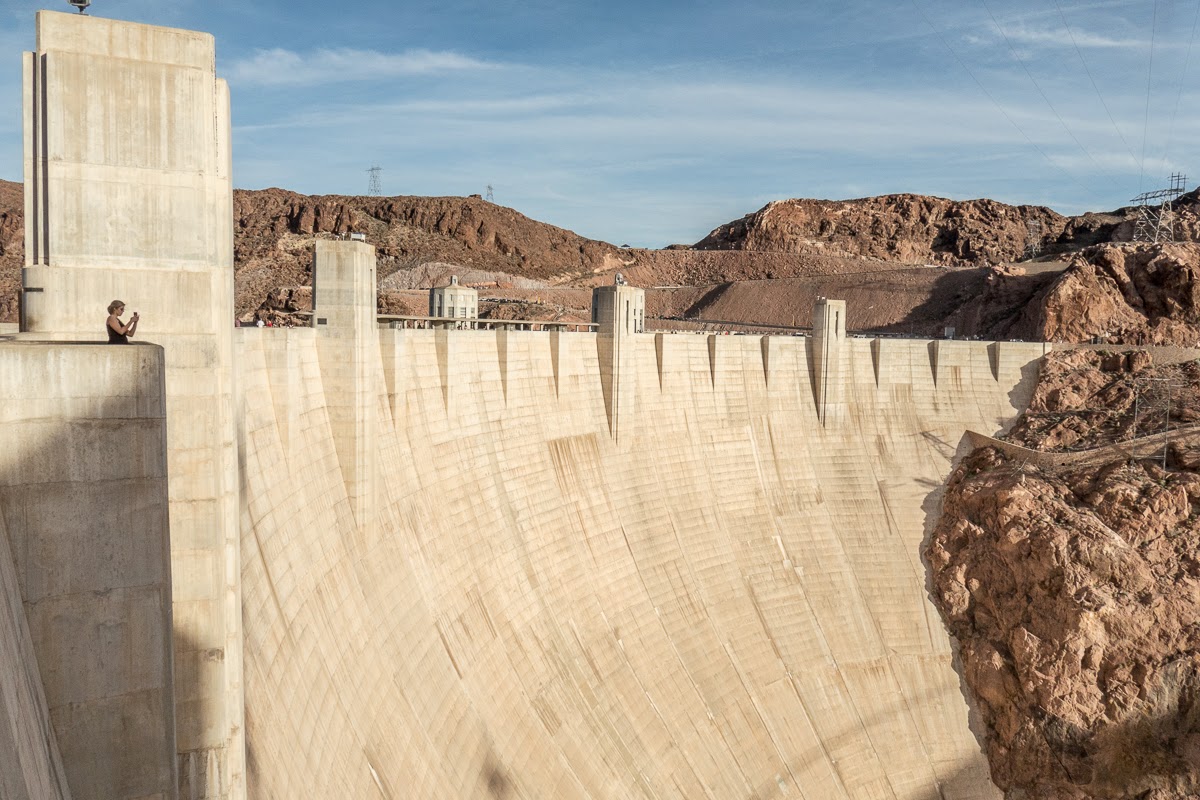 Gordon Kaufmann, the supervising architect to the Bureau of Reclamation, was brought in to redesign the exterior of the dam from its original Gothic design. He streamlined it into elegant Art Deco.

Allen True, a Denver artist, assisted Kaufmann with interior designs and color. True was responsible for one of the dam's most distinctive motifs - the Southwestern Indian designs in the terrazzo floors. Using such sources as an Acoma bowl and Pima basket, True merged Native American geometric concepts with Art Deco design. Many of the Indian designs were based on centrifugal themes, which related to the turbines in the power plant.

Two Italian immigrant brothers, Joseph and John Martina, installed the all the terrazzo floors in 1936 and 1937 with the help of 30 countrymen. John served as contractor for the job and worked with Reclamation officials. Joe, barely able to speak English when they bid on the job, was in charge of laying the floors. The Martina brothers contracted to install the terrazzo for 48 cents per square foot, for a total of only $51,718. Here is an example of the Native American design on the floor of the lobby in the women's loo. 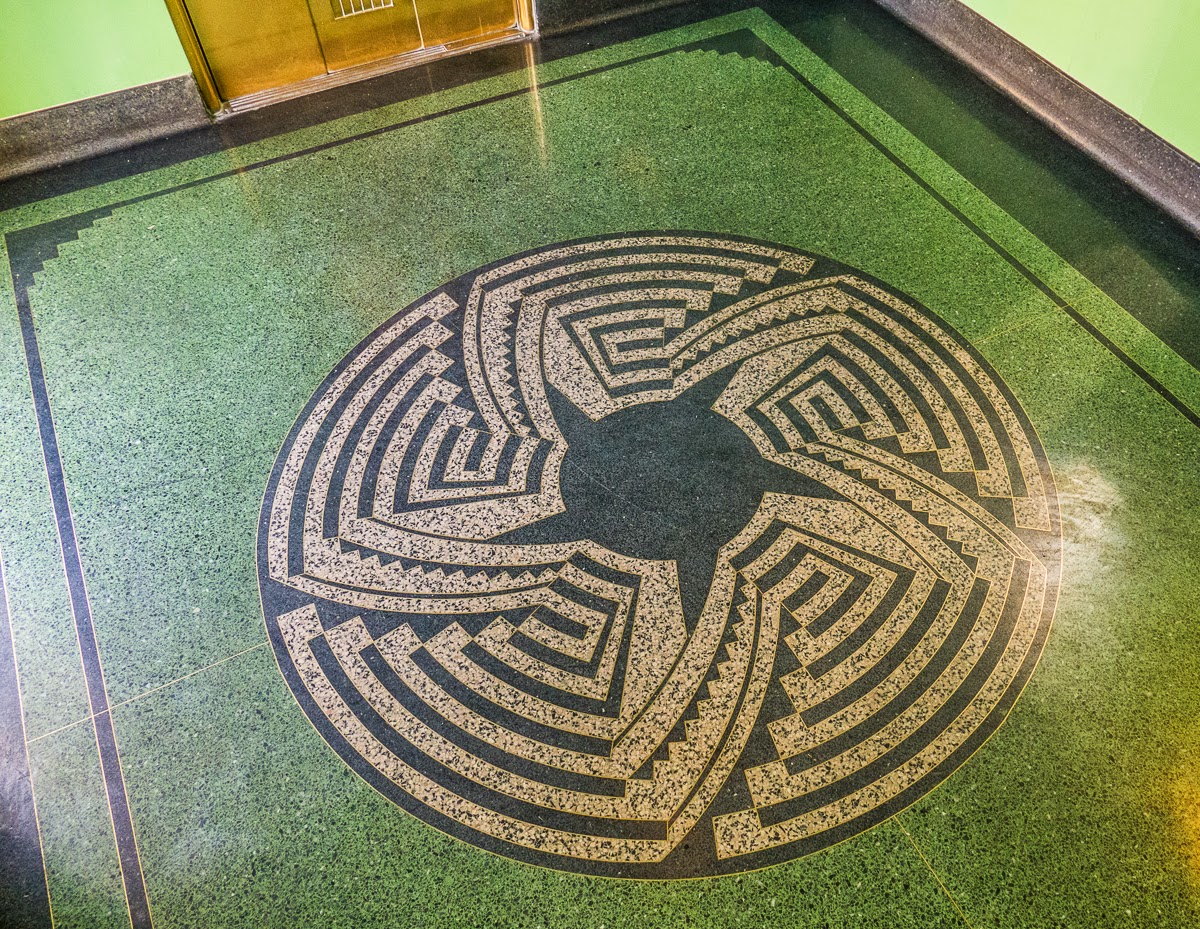 There are four of the towers, below, altogether; they filter the water going into the turbines. Kaufmann carried Art Deco sculpturing to the turrets rising from the dam face, and clock faces on the intake towers show the time in Nevada and Arizona; the state line goes through the middle of the dam. The two states are in different time zones, but as Arizona does not observe Daylight Saving Time, the clocks agree for more than half the year.

Arizona indeed does not observe Daylight Saving Time, but the Navajo Nation, which has trust lands in Arizona, does. It's fun, if you are easily entertained, to watch the time on your cell phone change back and forth, back and forth, when you go on and off tribal land. 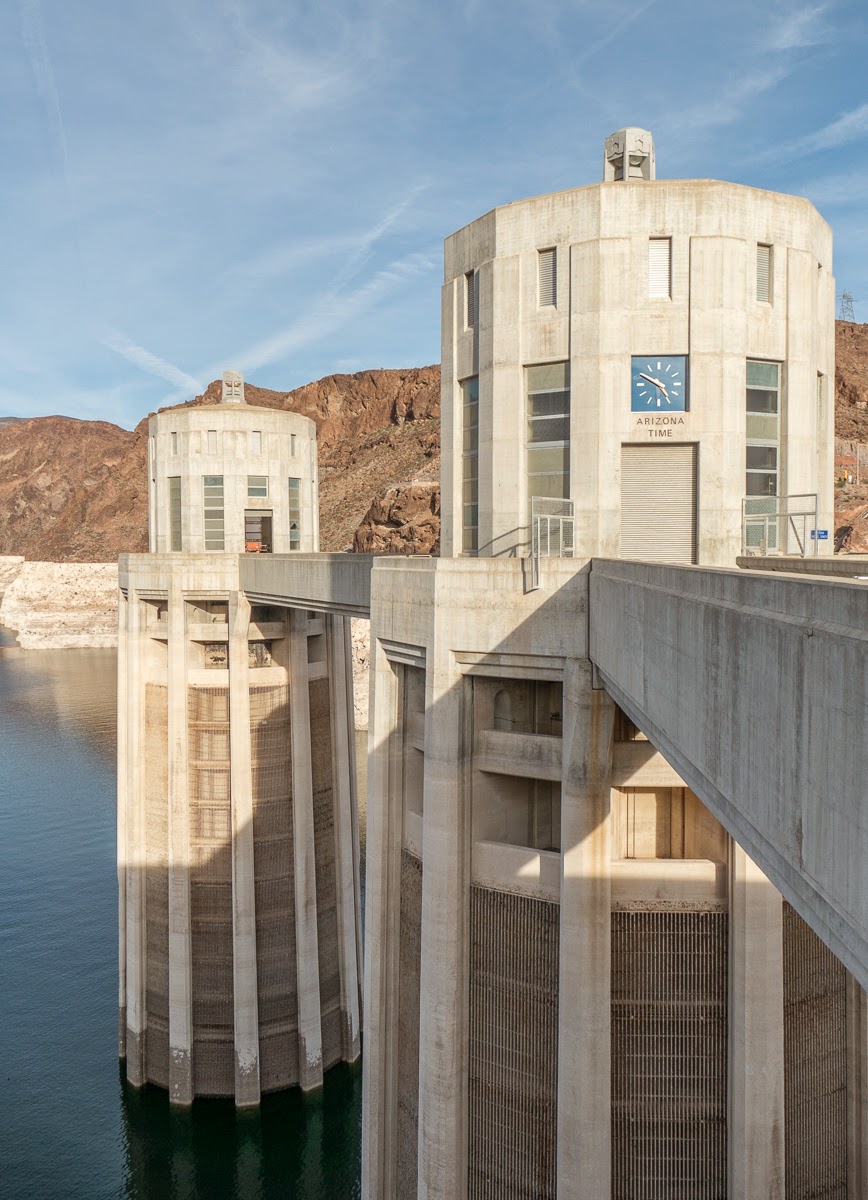 Across the road from the dam is a memorial plaza. Norwegian-born, naturalized American sculptor Oskar J.W. Hansen designed many of the sculptures on and around the dam. His works include the Monument of Dedication plaza and a plaque to memorialize the workers killed, a couple of photos below. The Wikipedia article is not clear on whether he designed the two thirty-foot tall bronze figures, called Winged Figures of the Republic, each formed in a continuous pour. To put the large bronzes in place without marring the polished bronze surface, they rested on ice and were guided into position as the ice melted. 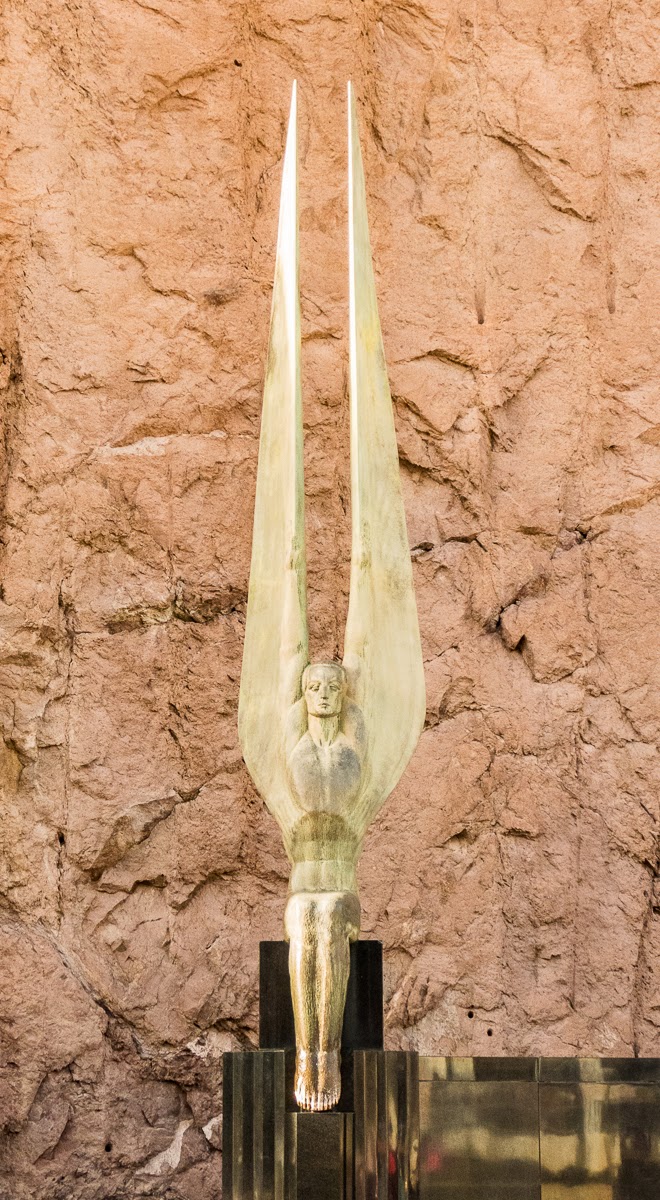 The memorial to those who died building the dam is another of Hansen's works. There were 112 deaths associated with the building of the dam. The first was J.G. Tierney, a surveyor who drowned while looking for the ideal site of the dam, and the last was his son, Patrick, who died 13 years to the day later. 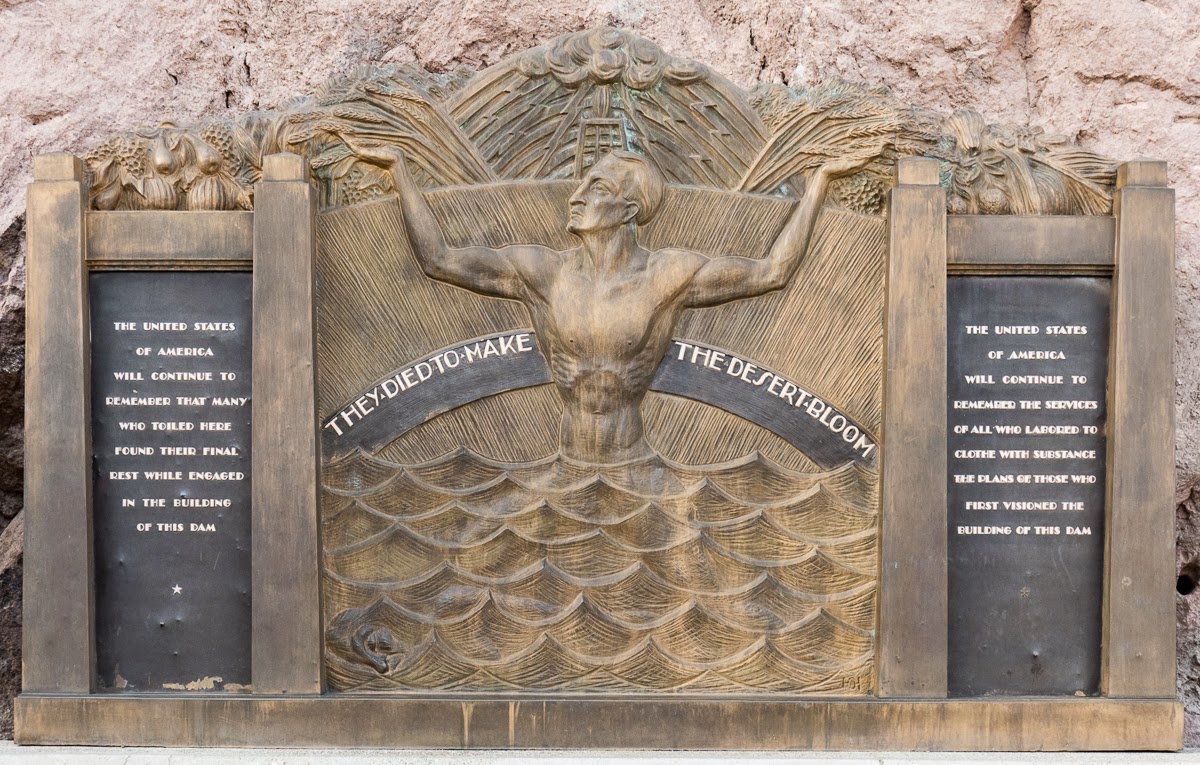 Another memorial to those who died. Not included in the official number of 112 were those whose deaths were attributed to pneumonia. Workers alleged that this diagnosis was a cover for death from carbon monoxide poisoning, brought on by the use of gasoline-fueled vehicles in the diversion tunnels, and a classification used by Six Companies, the structural architect, to avoid paying compensation claims. The site's diversion tunnels frequently reached 140°F, enveloped in thick plumes of vehicle exhaust gases. Forty-two workers were recorded as having died from pneumonia; none were listed as having died from carbon monoxide poisoning. No deaths of non-workers from pneumonia were recorded in Boulder City during the construction period. 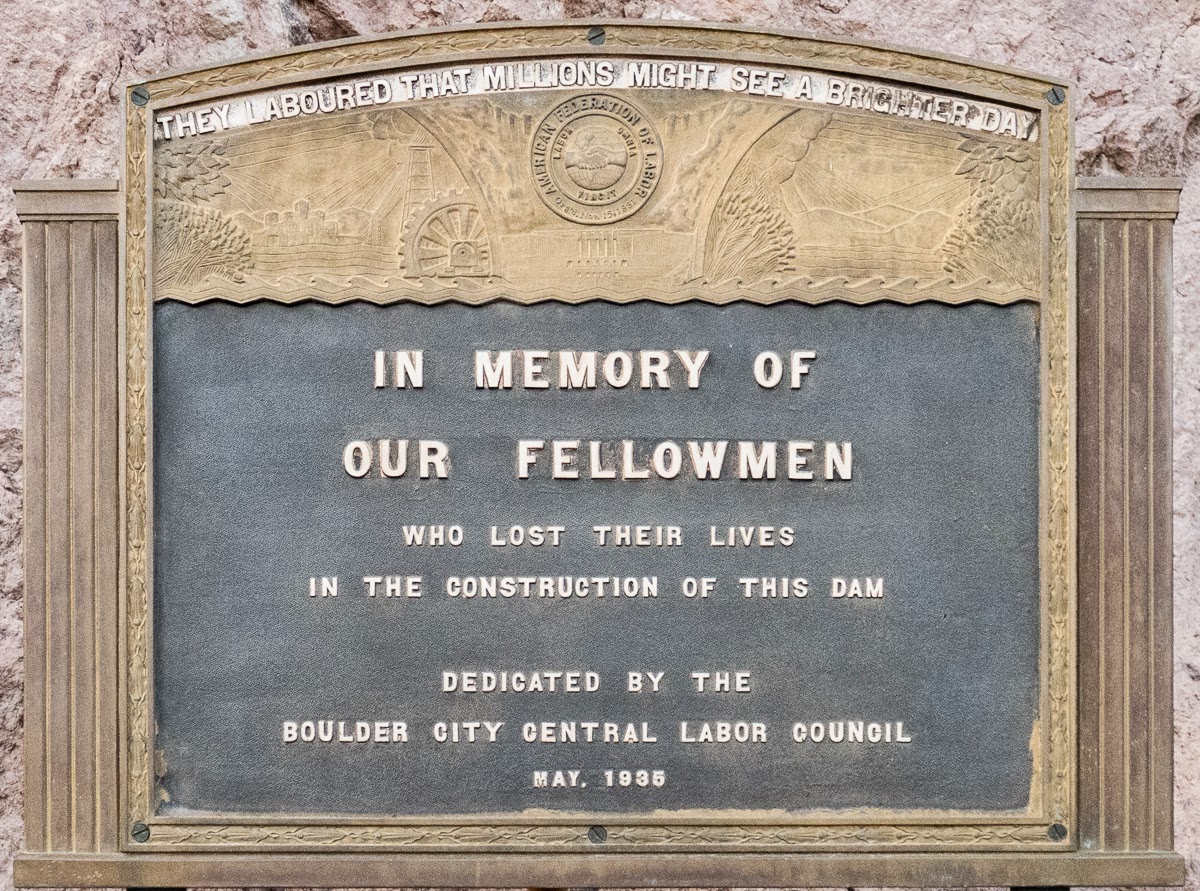 Surrounding the base of the monument is a terrazzo floor embedded with a star map. The map depicts the Northern Hemisphere sky at the moment of President Roosevelt's dedication of the dam. This was intended to help future astronomers, if necessary, calculate the exact date of dedication. The dam, after all, is not that far from Area 51. 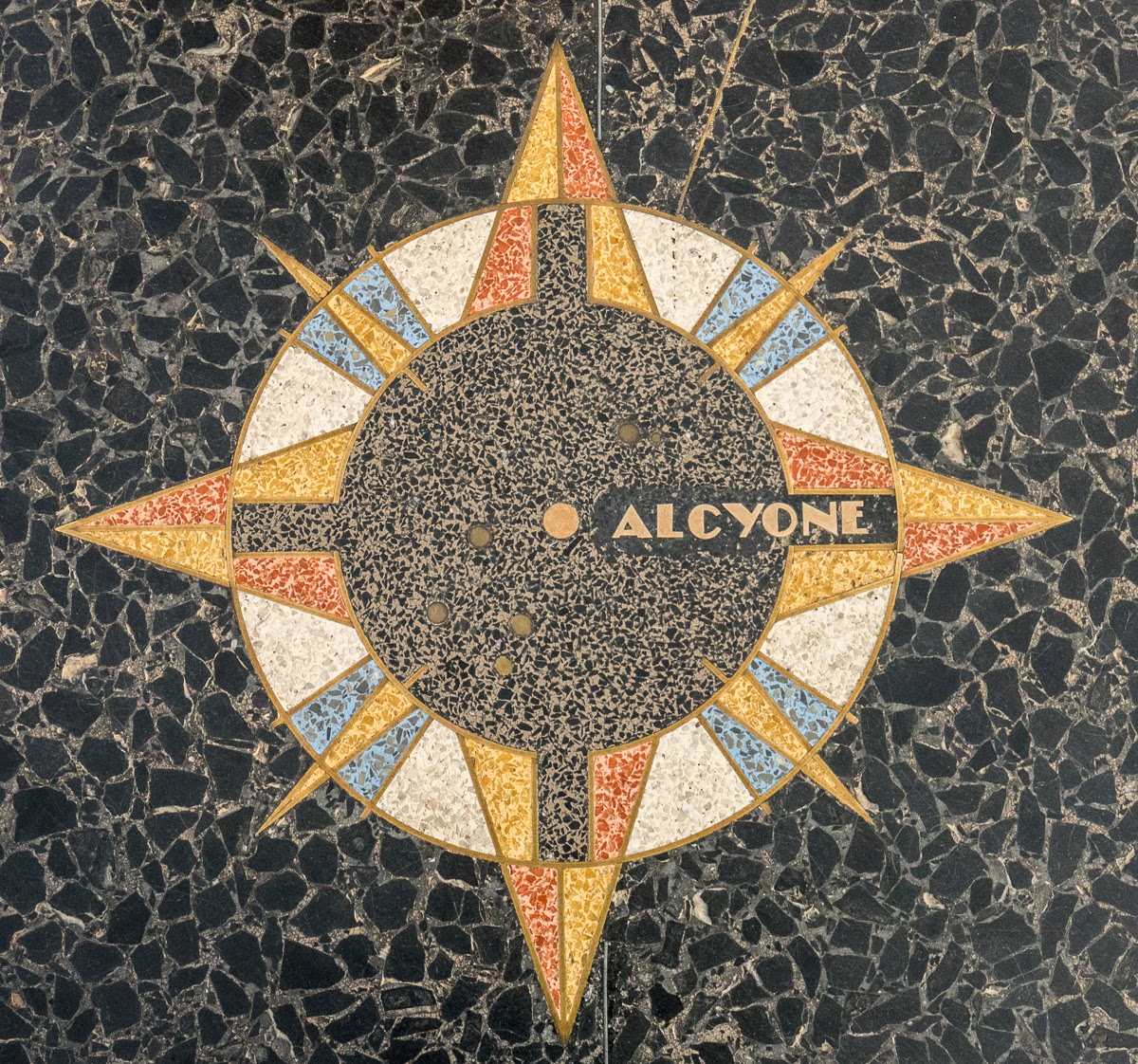 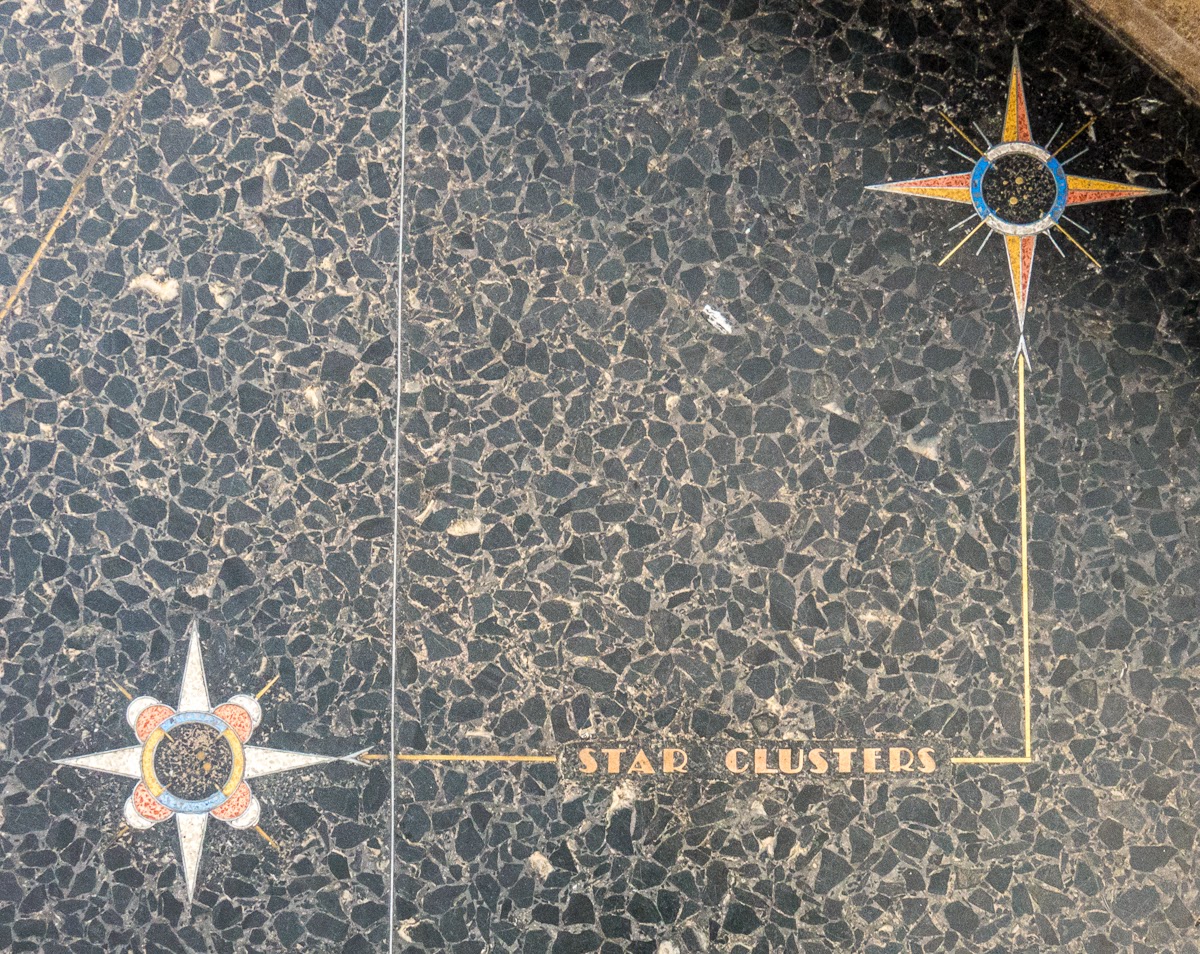 Bas relief plaques are inlaid into the plaza's surface, one for each of the seven states that fall within the Colorado River's basin. 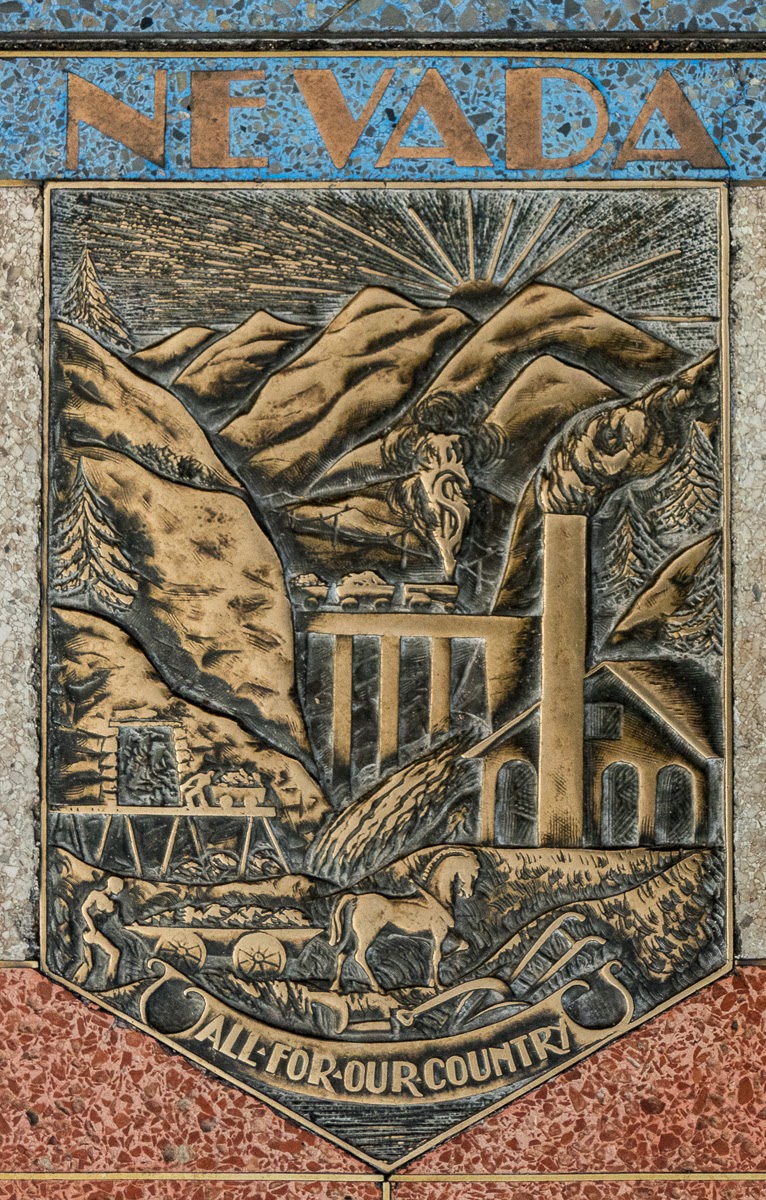 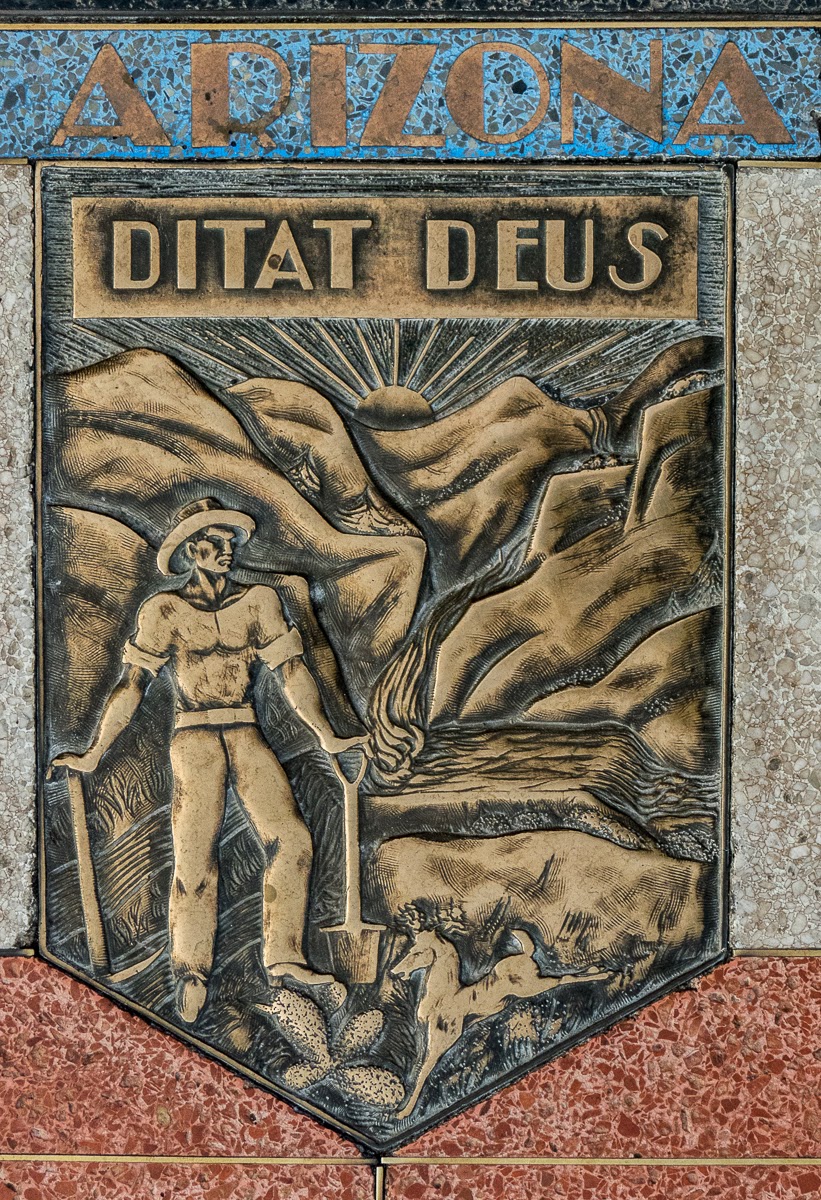 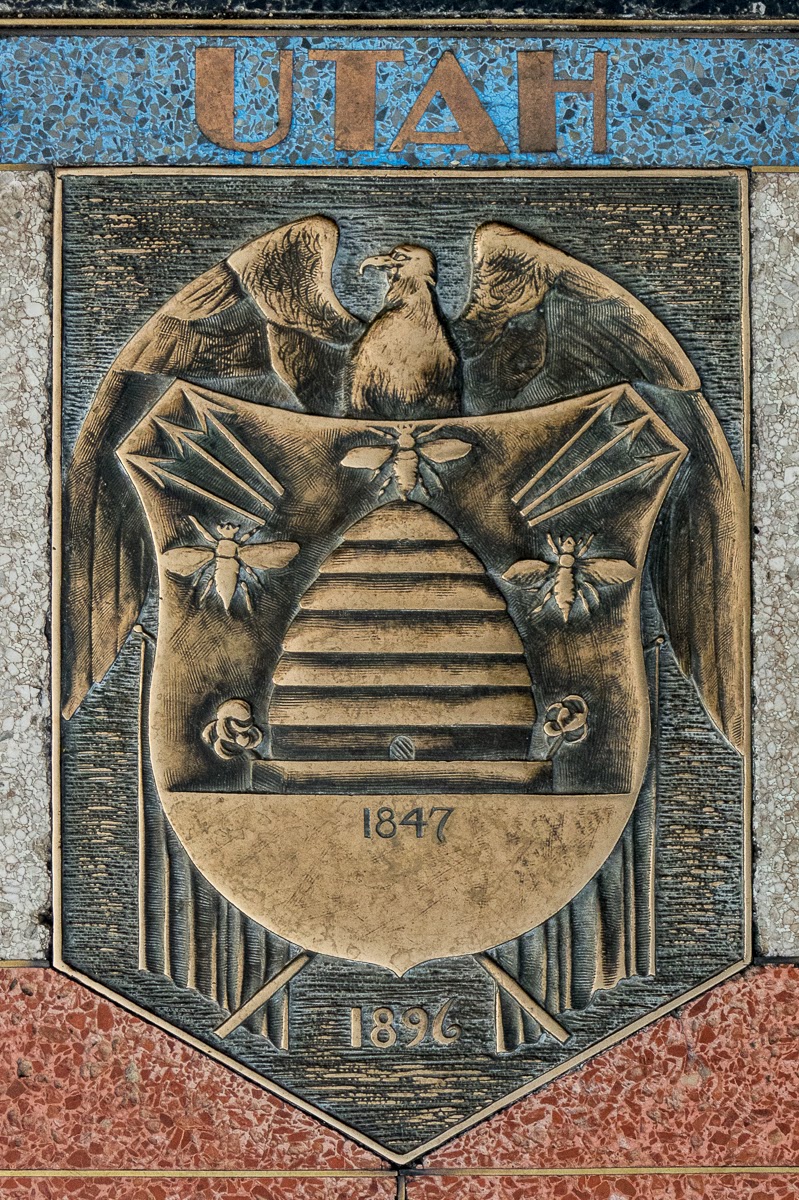 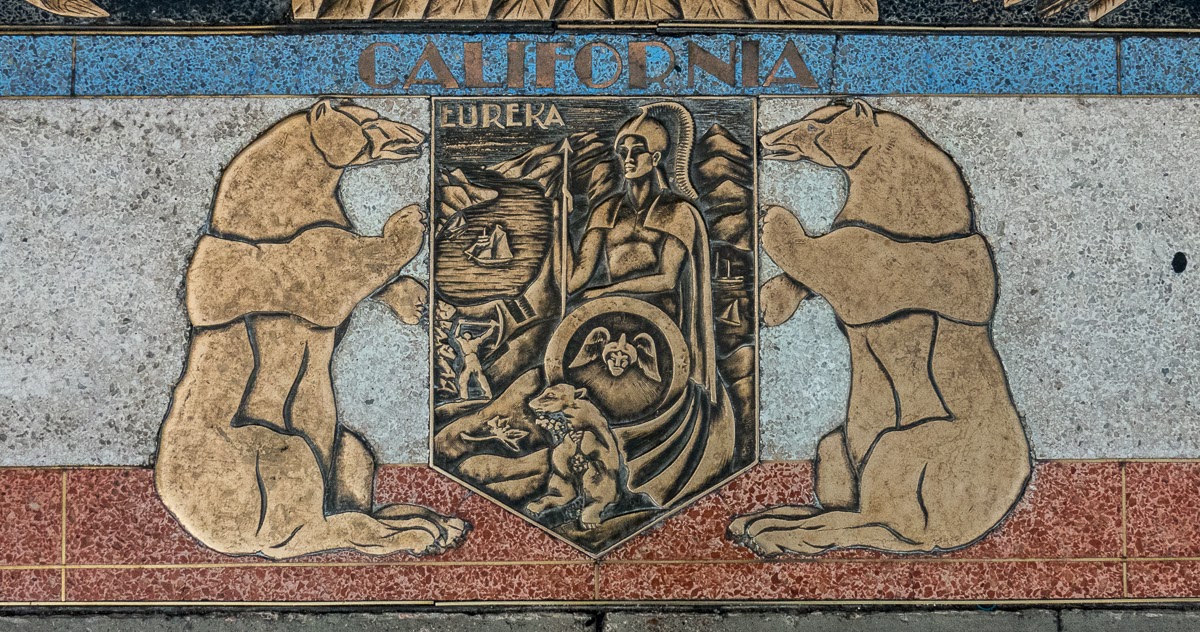 More beautiful terrazzo work at the base of the flag pole. 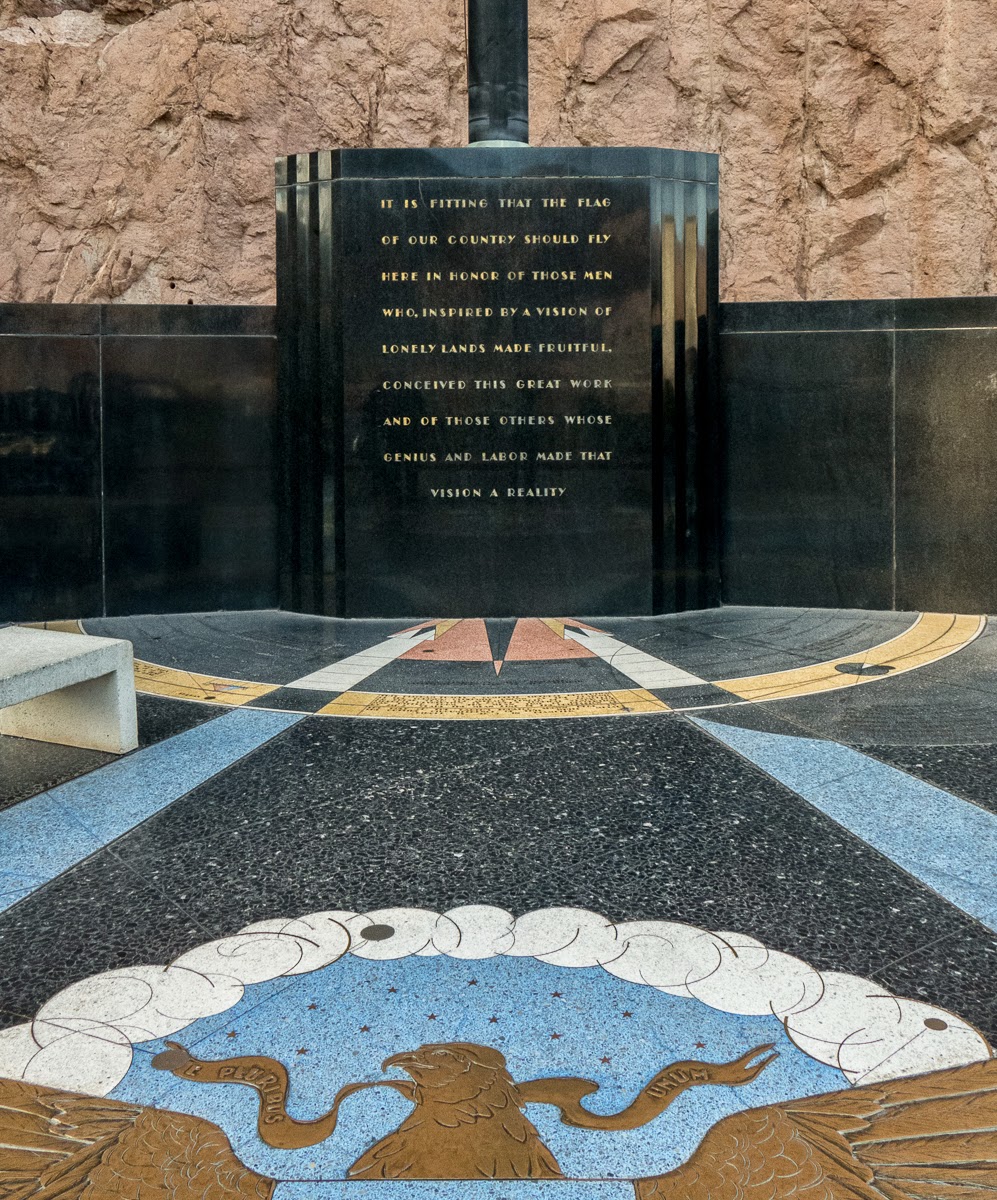 This statue is probably of a "high scaler." While suspended from the top of the canyon with ropes, high-scalers climbed down canyon walls and removed loose rock with jackhammers and dynamite. Falling objects were the most common cause of death on the dam site; the high scalers' work thus helped ensure worker safety.

The construction site became a magnet for tourists; the high scalers were prime attractions and showed off for the watchers. They received considerable media attention, with one worker dubbed the "Human Pendulum" for swinging co-workers (and, at other times, cases of dynamite) across the canyon.To protect themselves against falling objects, some high scalers took cloth hats and dipped them in tar, allowing them to harden. When workers wearing such headgear were struck hard enough to inflict broken jaws, but sustained no skull damage, Six Companies ordered thousands of what initially were called "hard boiled hats" (later hard hats) and strongly encouraged their use. 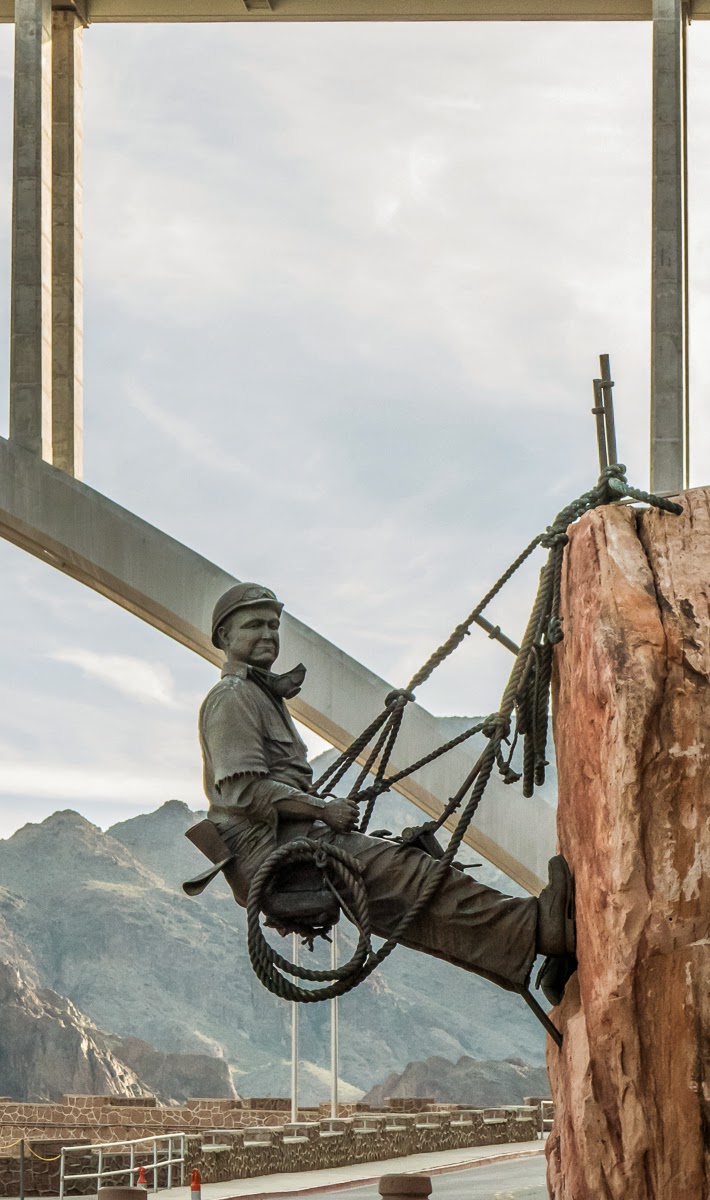 There's a lot to the Hoover Dam story. The websites I linked to above tell it in much more detail and are interesting to read. You'll see exactly where I plagiarized from. Is it plagiarism if I give credit?

This morning I came, I saw and I was conquered, as everyone would be who sees for the first time this great feat of mankind. - Franklin D. Roosevelt, at the dedication of the dam on September 30, 1935
at 4:25 PM