Out of the frying pan and into the freezer

We had to leave Death Valley because of the heat. It had topped 100° several days and was in the upper 90s other days. Of course, after we left it dropped to the 80s but there you go. It wasn't going to stay there, anyway.

We arrived at El Portal, about 30 minutes outside the park and where our trailer site is, on Monday and set up the house in a light rain, knowing the forecast was for more rain at lower elevations and up to a couple of feet of snow in the mountains. California can use all the rain it can get so HH and I were rooting along with everyone else for the forecast to be accurate. I don't know what the recorded precipitation was but the sky was trying very hard on Tuesday, when we drove into the park to have a look around.

We stopped at the fee station in the rain so I could wave my volunteer annual pass to get in free. The ranger looked at the truck, asked if it was 4-wheel drive, and said we'd have a chance to use it up ahead. Cool!

For a long way we had only rain, and the right kind of rain if a place in in drought; it was steady but not overwhelming. We kept gaining elevation and before long the rain drops got wetter and bigger, changing into fat flakes. The Merced River snakes its way along the road, providing accident-causing views. What a beautiful, rocky, rushing river! The park has many pullouts along the way where visitors stopped to enjoy the view and the lucky circumstance of being there in April snow. 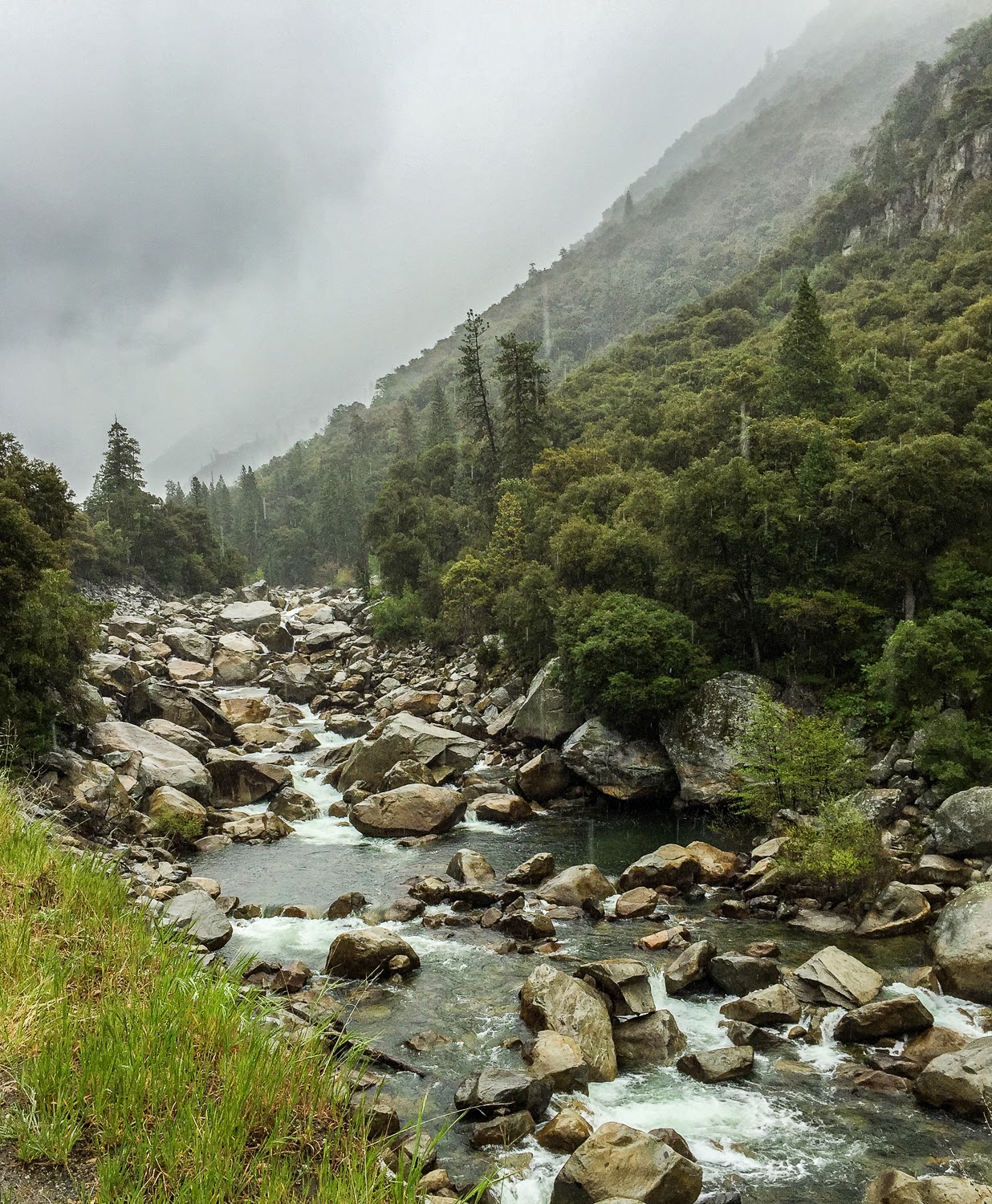 It was almost surreal, having been in the desert three days before under full-bore air conditioning. 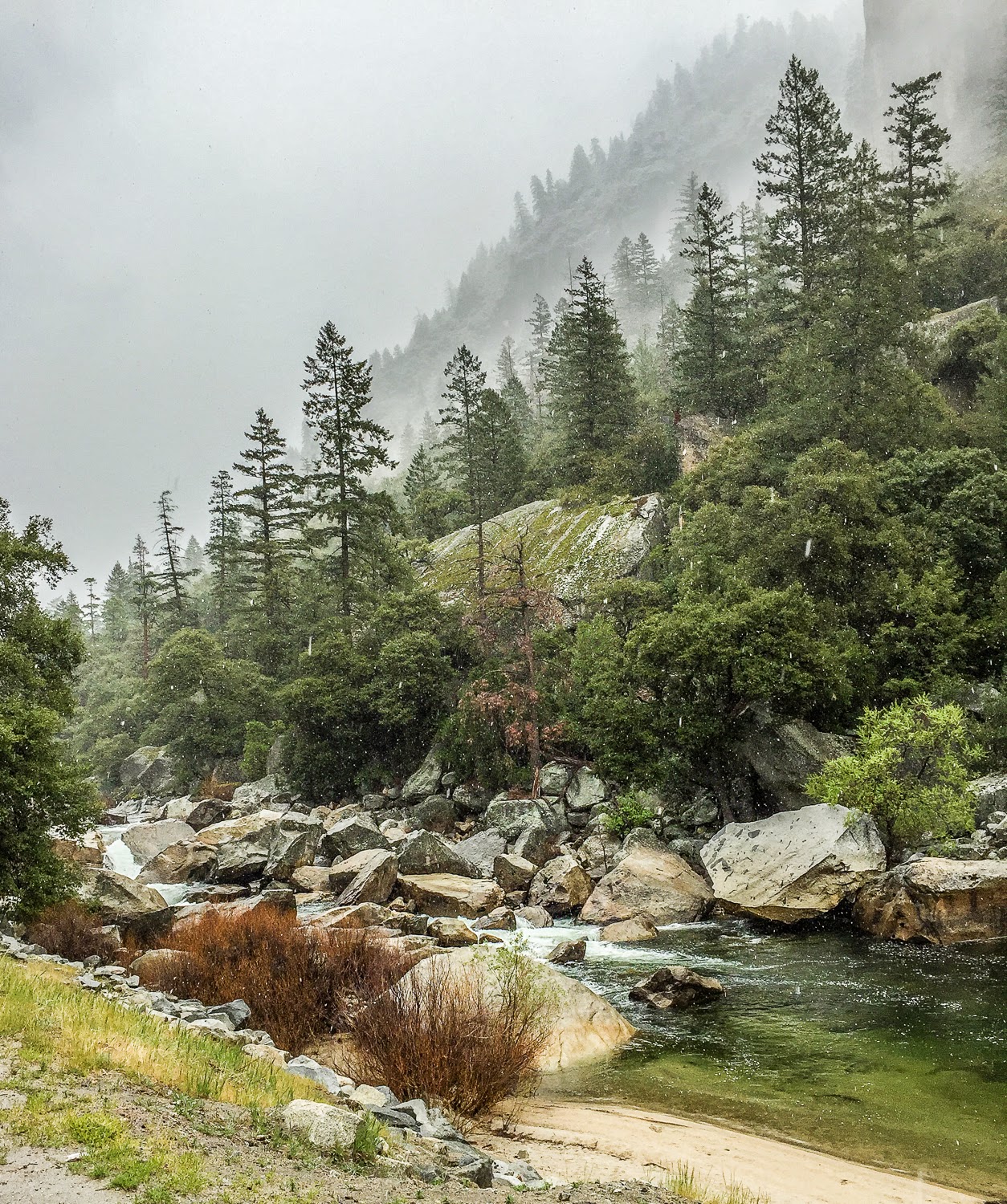 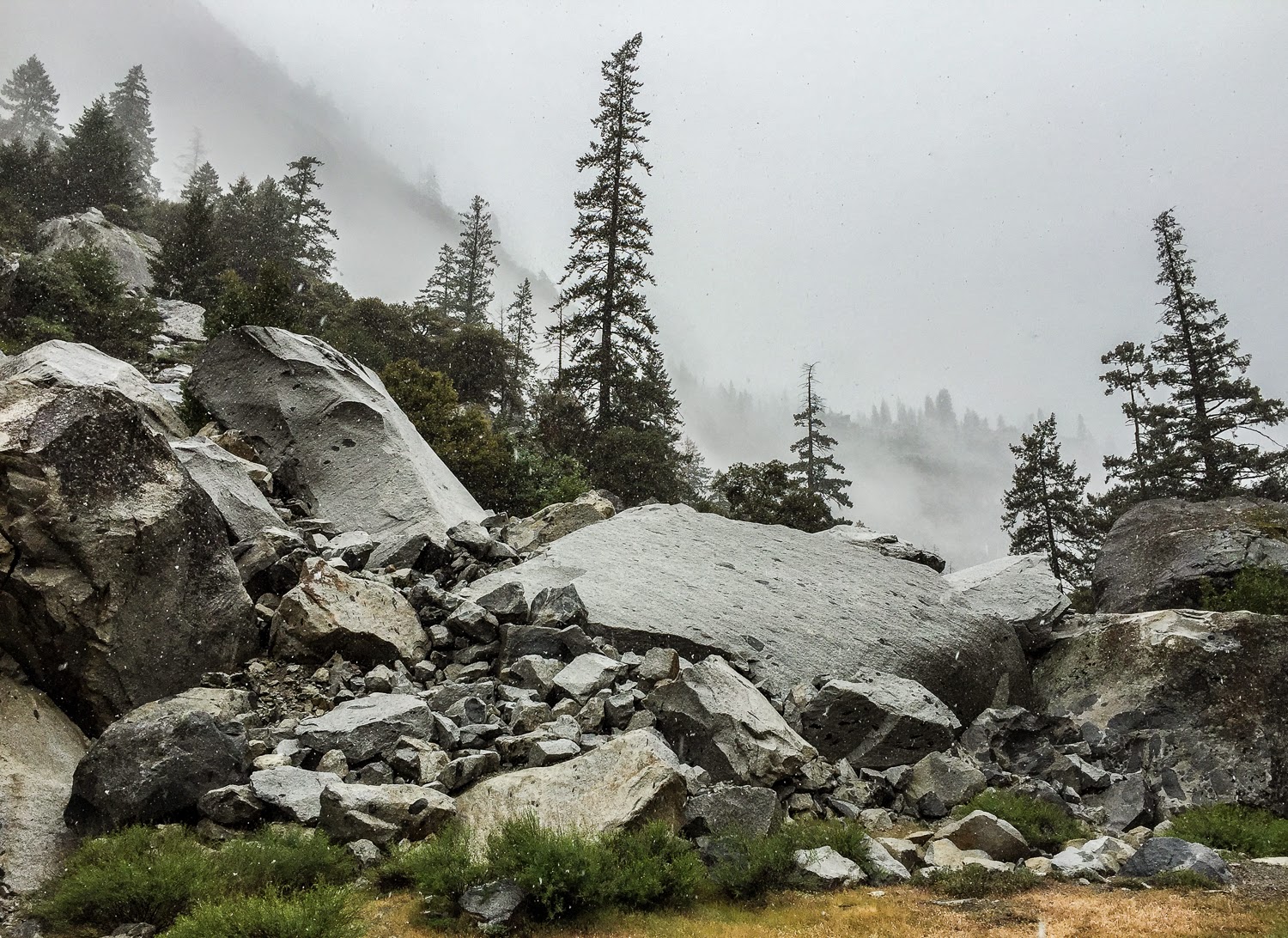 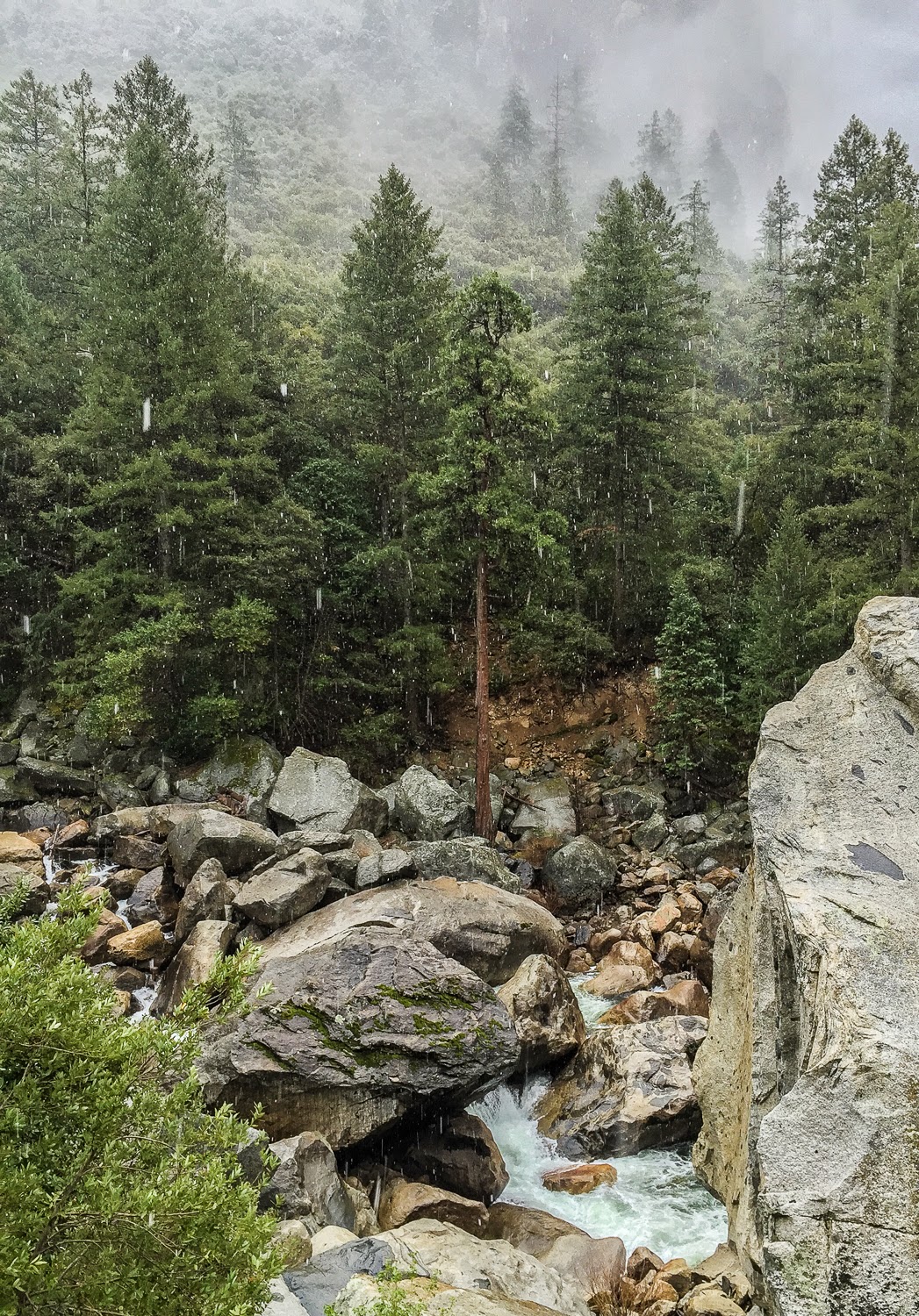 The higher we went, the thicker the snow fell. 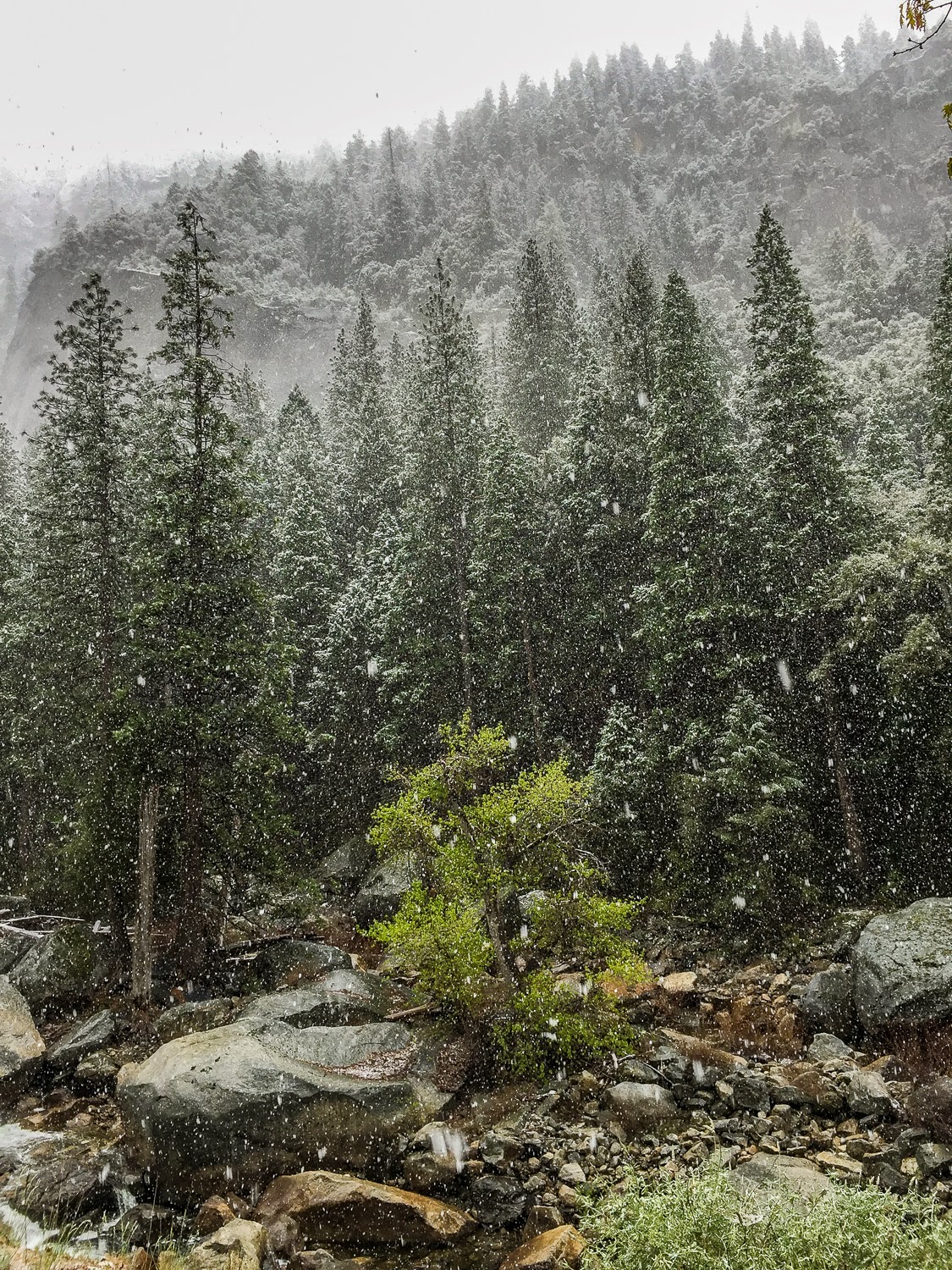 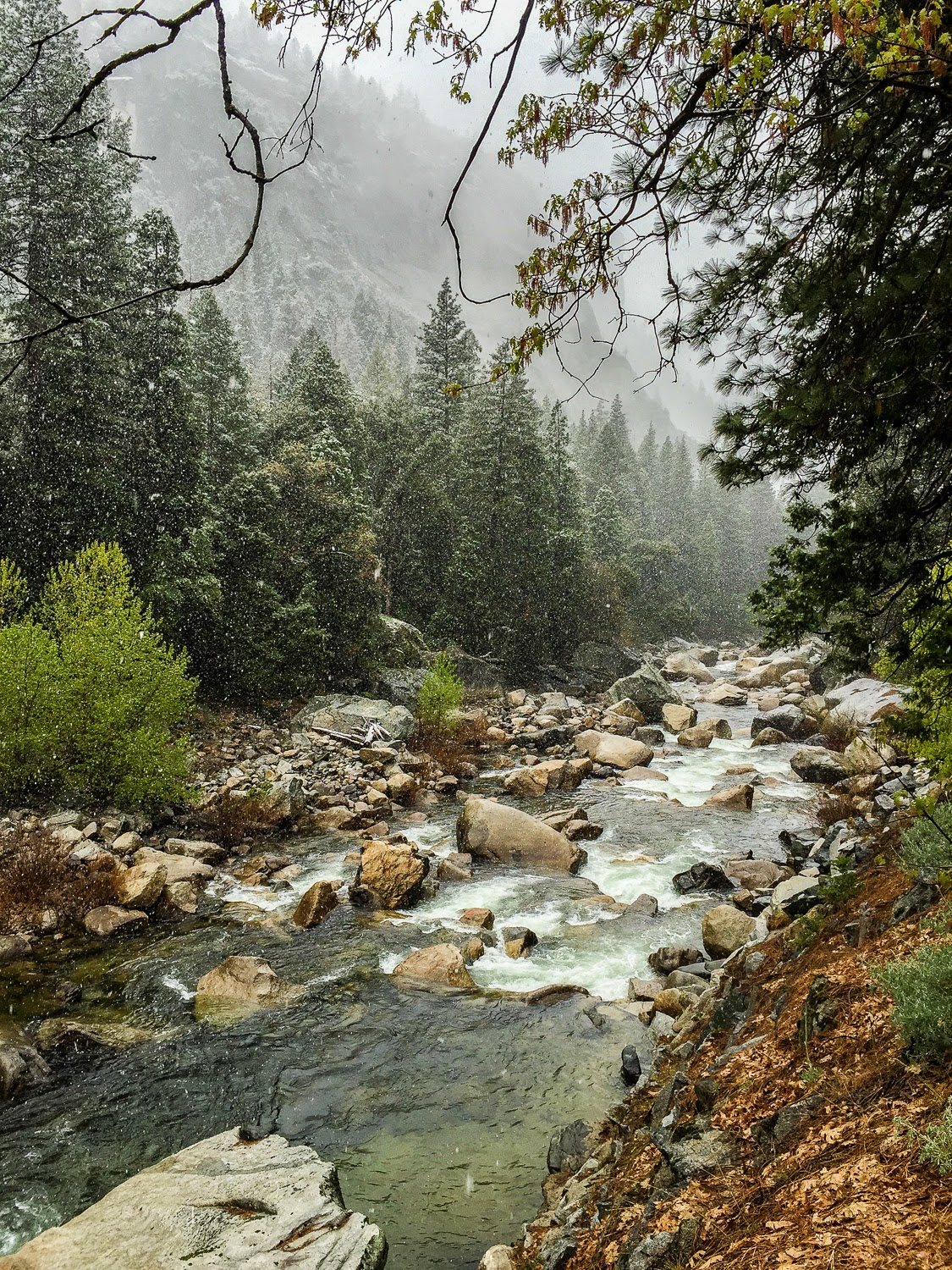 What luck to be here and see this. 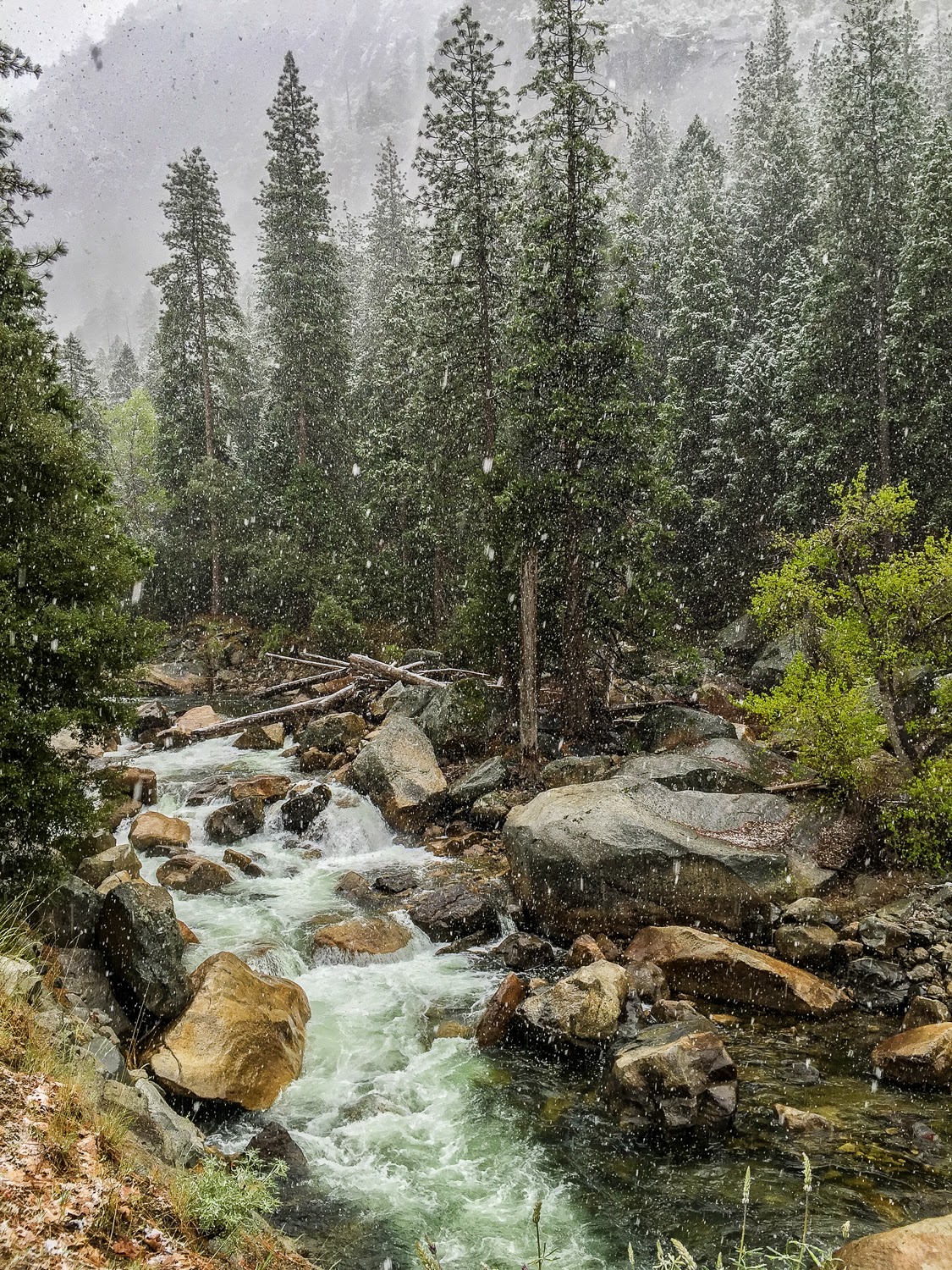 HH took some photos through the windshield while I drove in 4-wheel drive, until I realized I didn't need it. I grew up in Detroit and lived in the Upper Peninsula, for heaven's sake! I think I know how to drive in snow. 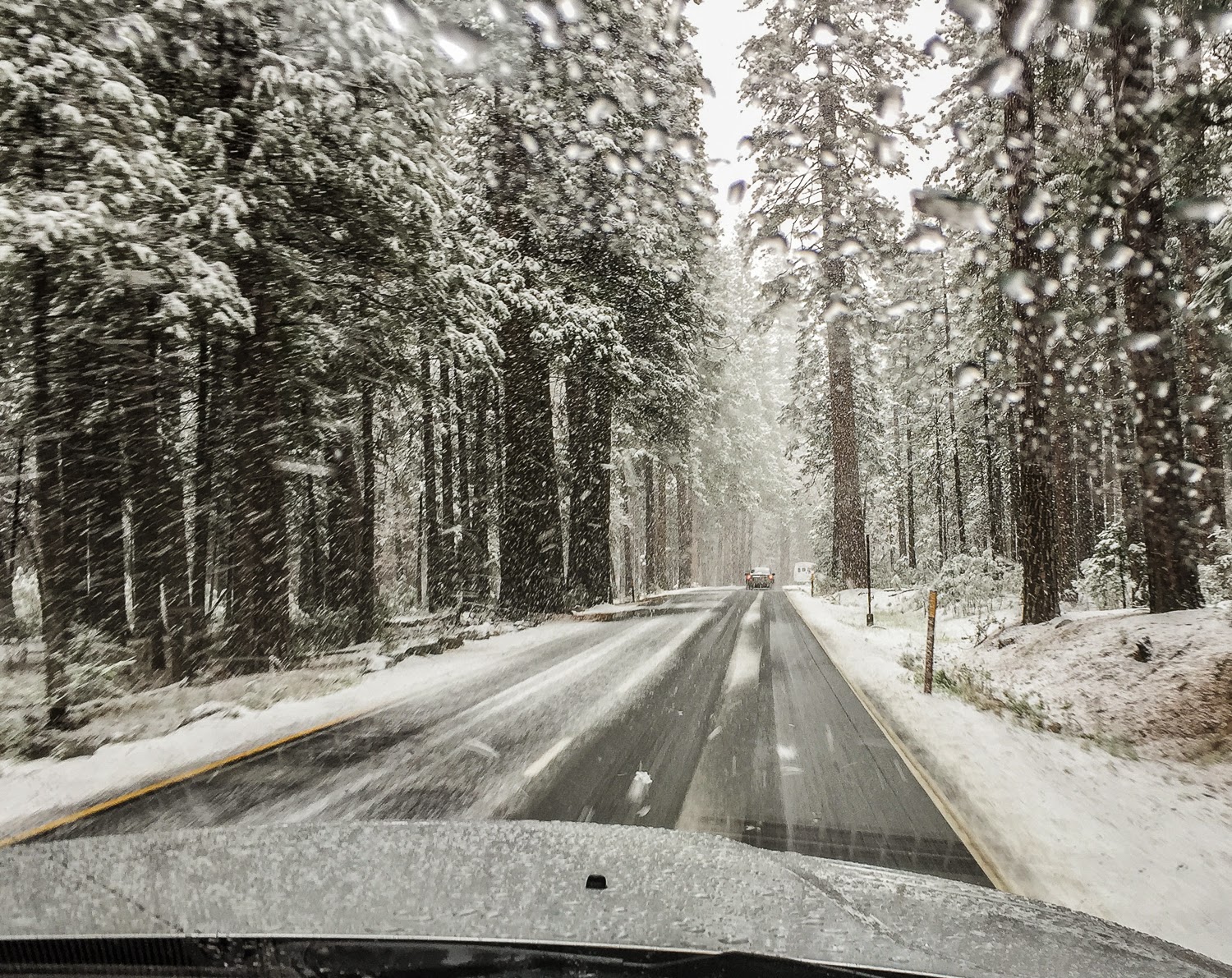 I know it's not much fun when winter goes on forever but it was a real treat for us to be snug inside, not having to shovel anything or tote firewood, and just enjoy the view. 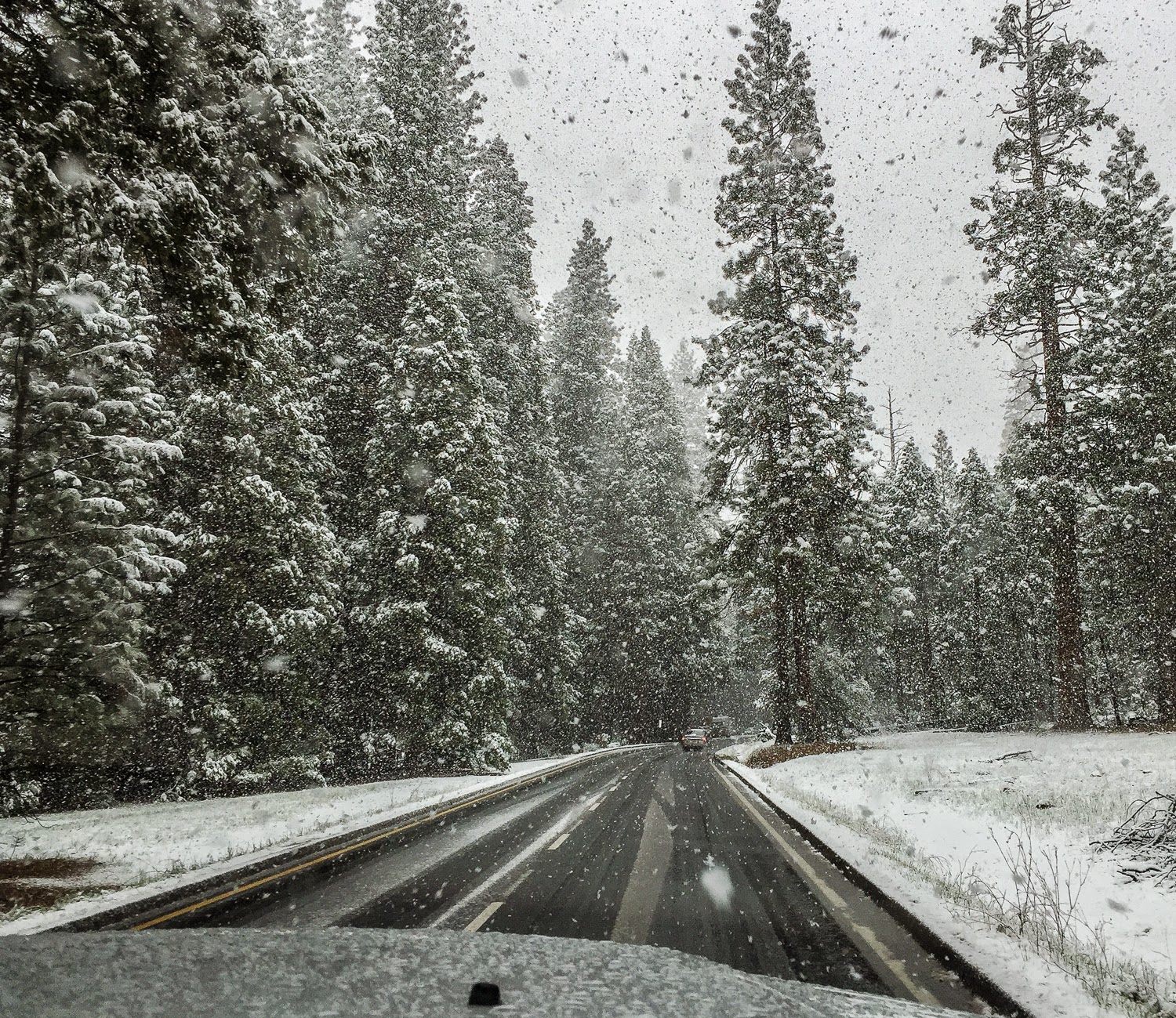 If not for needing something at the Village store, which they didn't have, we probably wouldn't have gone in. I'm thankful for our unproductive shopping trip. 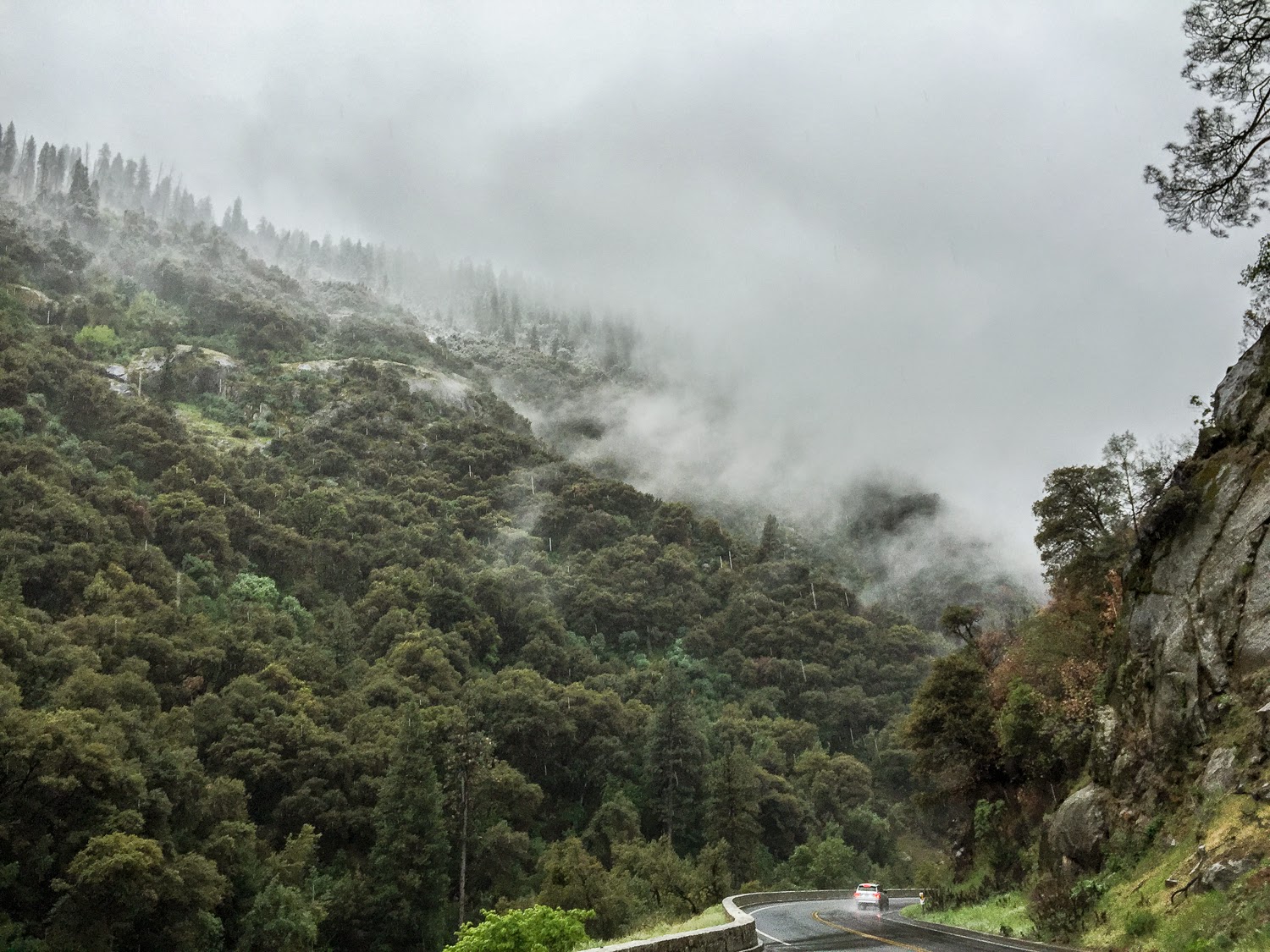 For now, I can walk to work to a building in El Portal. I have a choice of two routes so I go one way and come home the other, but both follow the river, flowing just a little faster since the rain.

I have been graced with being in love with every park I've worked in; each has its own temptations and treasures. Yosemite, even early in the game, already slips into its slot seamlessly.

The snow is melting into music. -  John Muir, John of the Mountains: The Unpublished Journals of John Muir; edited by Linnie Marsh Wolfe, 1938

Note: I left my camera at home so I used HH's iPhone 6 for these images. Incredible!
at 9:18 AM