I love a (small town) parade

A brief break from Russia pictures, if you please.

Today was the annual White Elephant parade. White Elephant is the best thrift store around, and that's saying a lot because the entire Tucson area is loaded with them. Much of my house has been furnished with purchases from WE. I don't know why they have a parade but HH and I went to watch it this morning because 1) it's the first time the parade has been on since we moved to Green Valley, 2) I love parades, and 3) our good friend and neighbor Edie was the parade chair this year. Edie lives across the street, and was the first person I met in the 'hood when she came trotting across with a bottle of wine before I'd even finished unloading the first load of stuff from my truck. She's a kind, lovely person, the kind I have a hard time twisting my brain around that she's Republican, but we love her anyway.

I wanted to make sure we had a good spot to set up our chairs so we got to the parade route at 8:00 for the 10:00 start, and even so, dozens of chairs were already there. I'd been concerned about leaving the chairs unchaperoned but I keep forgetting that this is Green Valley. We wandered off to breakfast and came back with lots of time to spare - and were pleasantly surprised that the parade started on time.

The parade began with several banner-toting volunteers from the cadre of about 600 from White Elephant. Right, 600 volunteers run the place. It takes that many to sort, clean, price, display, sell, and deliver tens of thousands of items a year. It takes in a remarkable amount of money, so much so that in 2014 it donated $1.6 million to local organizations like St. Andrew’s Children’s Clinic, Community Health Center, Green Valley Assistance Services, Salvation Army, area community food banks, assorted foundations, local public and private schools, rural volunteer fire departments, community arts organizations, and national disease control agencies. It also, in 2014, established a 4-year scholarship fund for local high school seniors. It's a most efficient organization, and raises that much money being open only three hours a day, six days a week. They don't take credit cards, but do have an in-house ATM. I am intimate with that ATM. 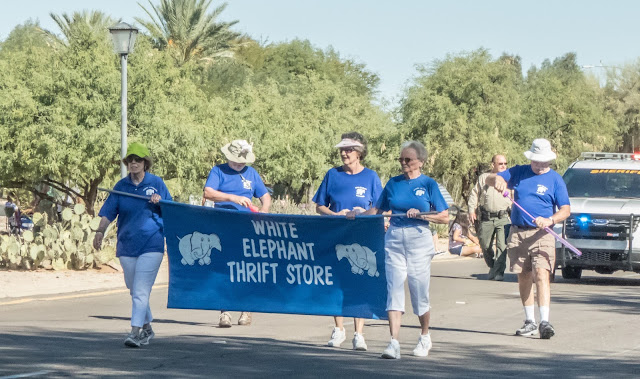 Let's start with vehicles. The Pima County Sheriff was being chauffeured in this gorgeous Bugatti. I noticed his finger pointing at the boy on the sidelines only when I loaded the pictures on the computer, and thought how lucky the kid was that the Sheriff here isn't Maricopa County's Joe Arpaio. He has a thing about minorities, which is getting to be a misnomer in Arizona, and it isn't a good thing. 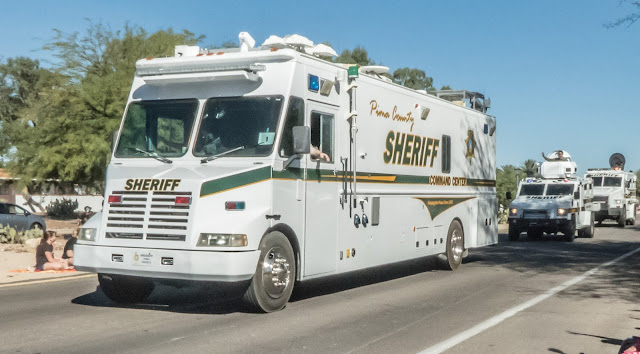 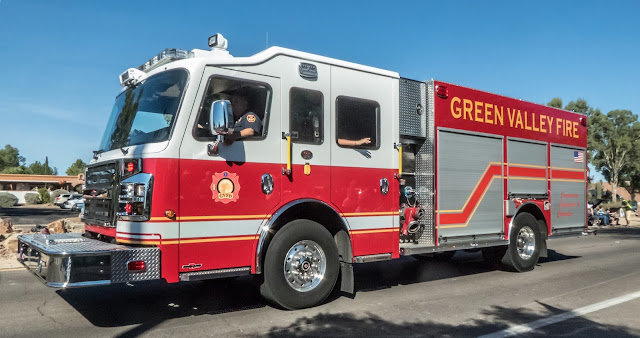 This is from another fire truck, I think from one of the smaller jurisdictions, with a note of thanks to White Elephant. 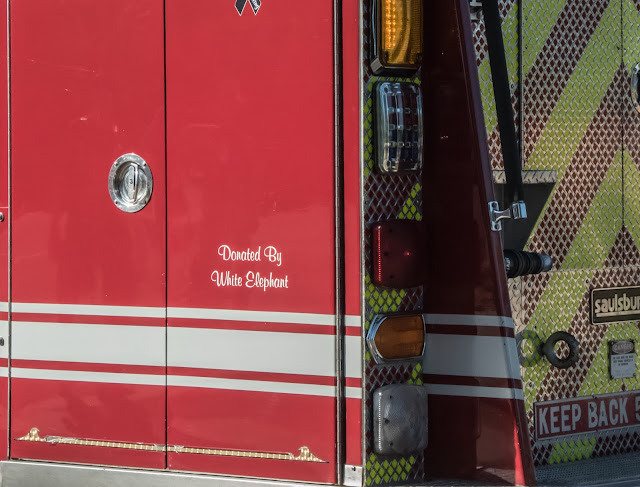 The Grand Marshal of the parade, the Green Valley fire Chief Chuck Wunder. Speaking of the fire department, they're the folks to call if you find a rattlesnake in your yard, just in case you're thinking of moving to Green Valley. 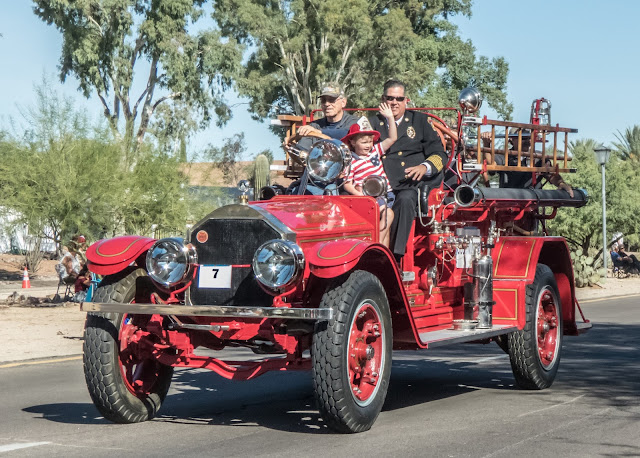 The local car club had some beauties today. 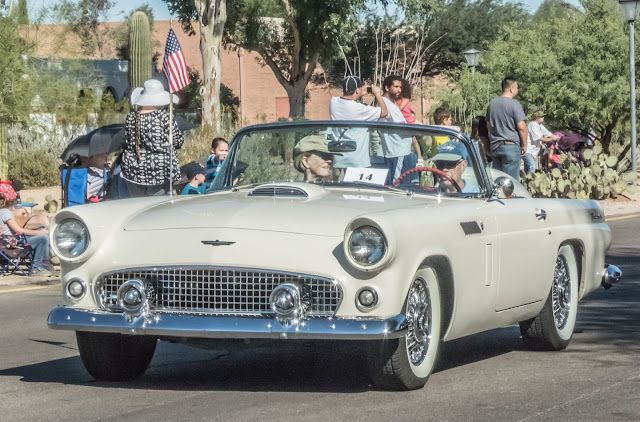 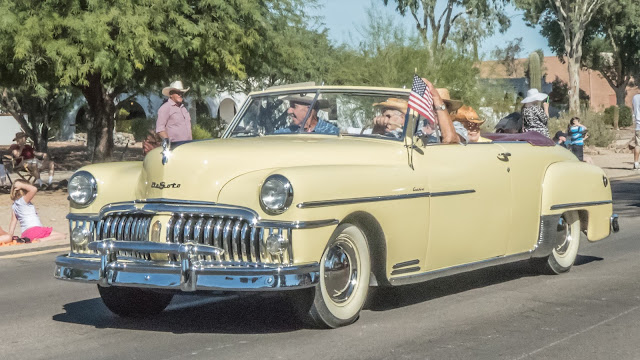 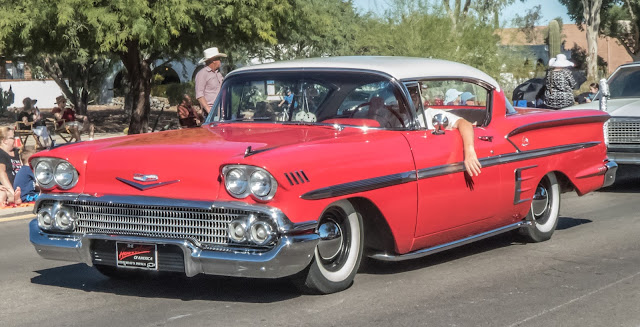 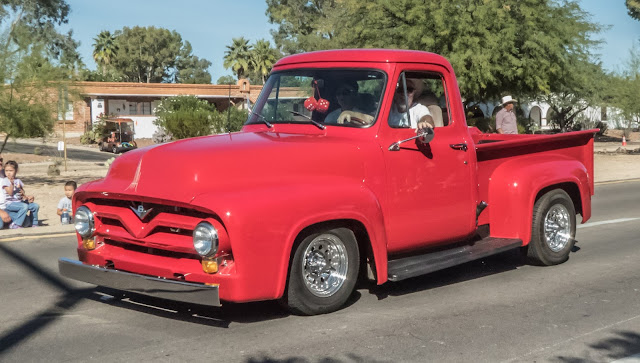 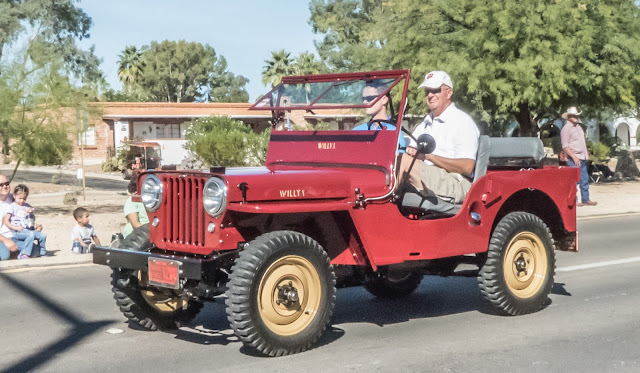 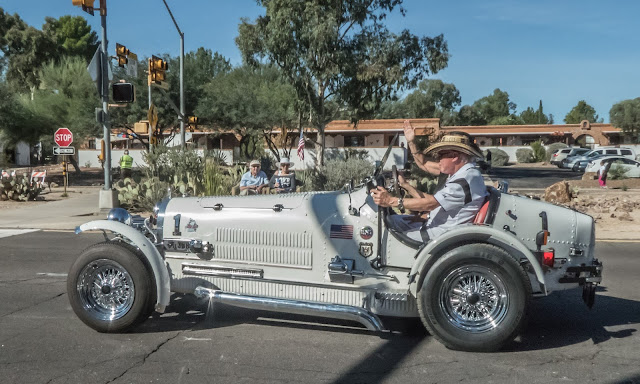 Plus this work in progress. He got a lot of cheers.

And this Caddy, which gave me an immediate flashback to when I lived in Detroit and they were fondly called Pimpmobiles. No disrespect to the current owner intended.

This bee-utiful T-bird was carrying someone from one of the local school boards. 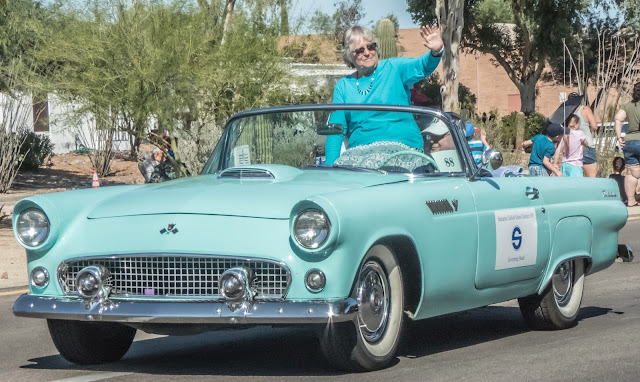 We saw two animal-driven vehicles, including this stagecoach, 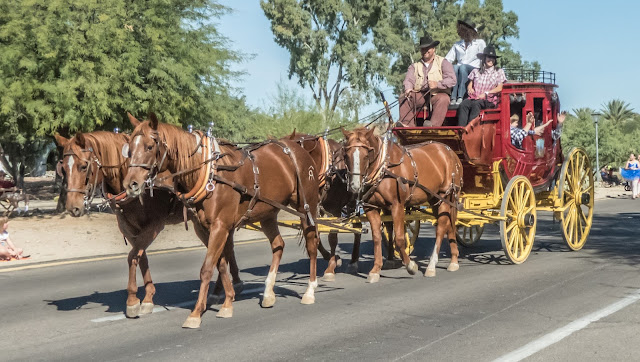 and a pup-powered cart. I've seen this woman and her dogs several times when I'm out walking, but I've never seen her in her fairy costume. 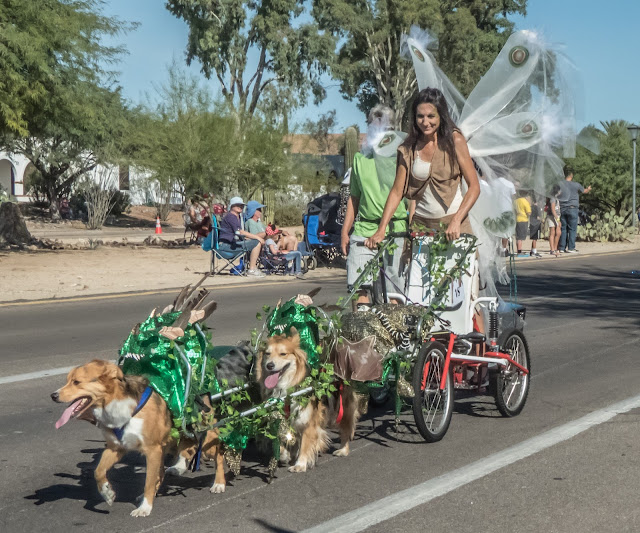 I have photos of just two Green Valley Cadillacs, aka golf carts. They're quite popular here because most everything is within just a few miles and it keeps wear and tear off the car. There are even golf cart lanes on most streets. I looked into getting one but for what they cost I can pay for a lot of wear and tear on my car. 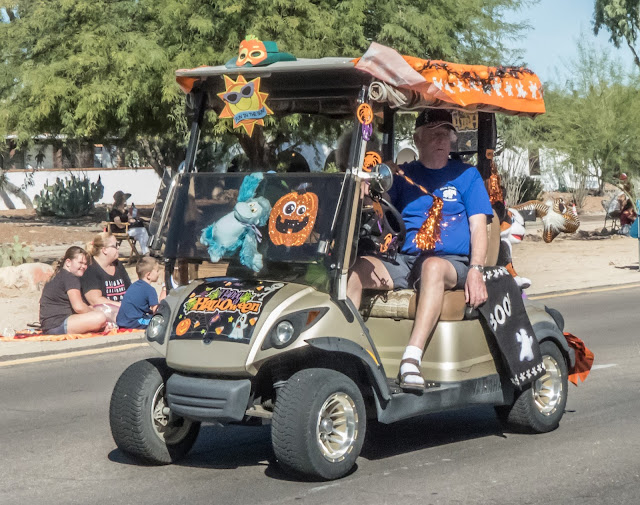 Quick!! Who remembers this song? 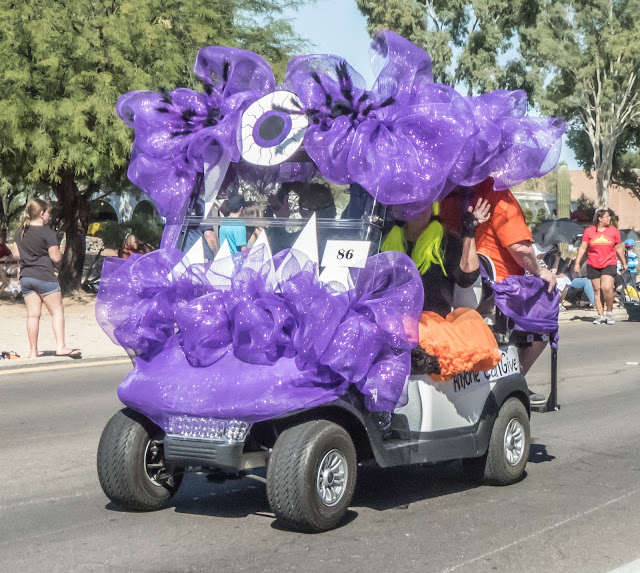 This next section was HH's favorite - tractors. Even I identified the Hit and Miss engine idling on the trailer. 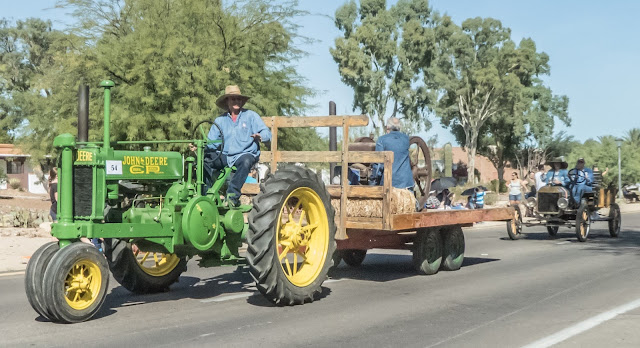 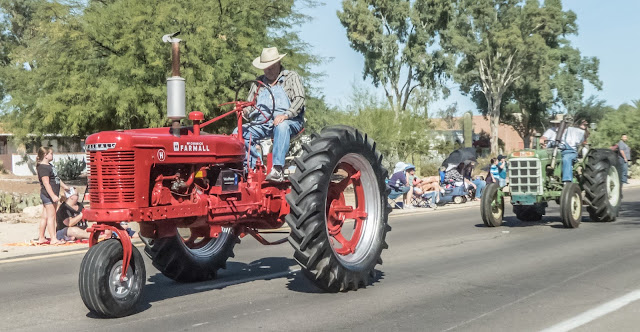 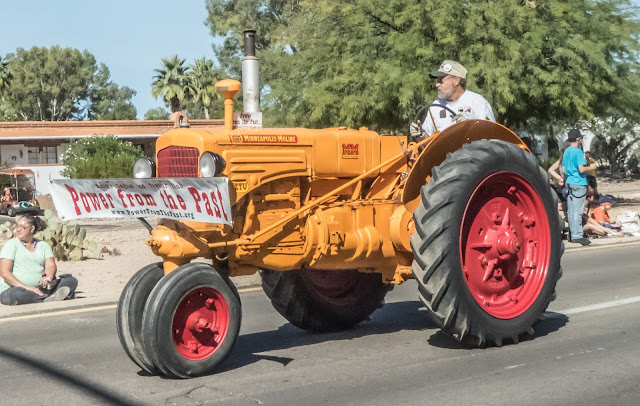 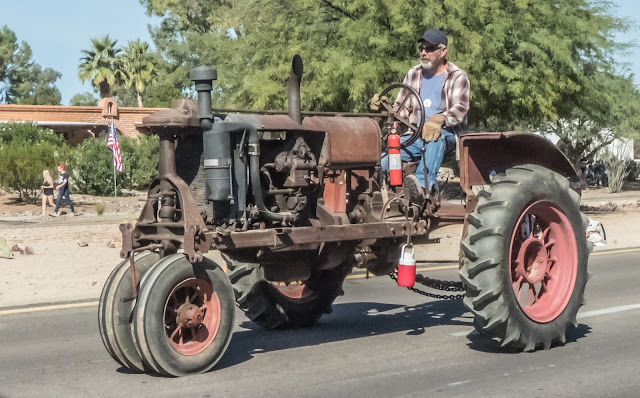 As HH commented, really all you need is an engine, wheels, steering, and a place to sit. This is a minimalist tractor. 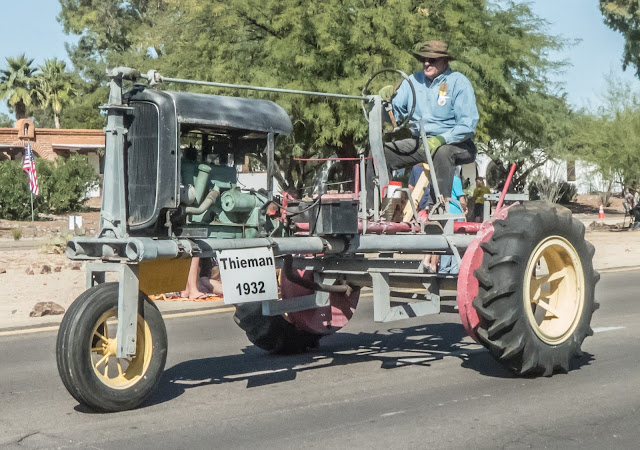 A parade would not be complete without the Shriners... 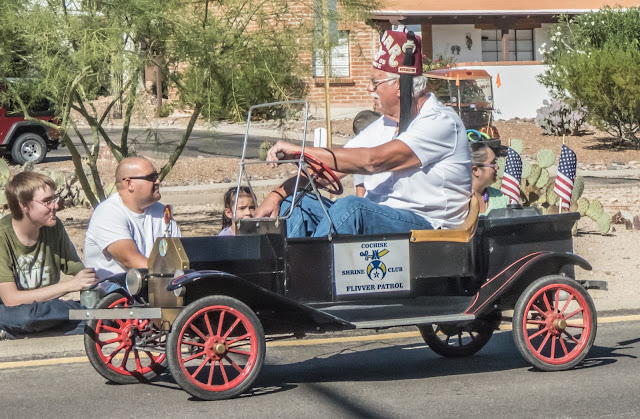 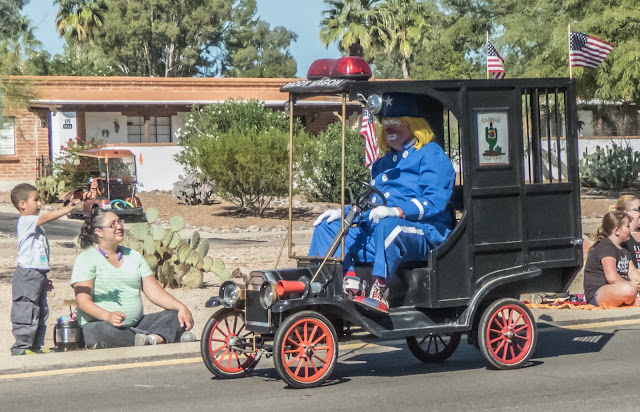 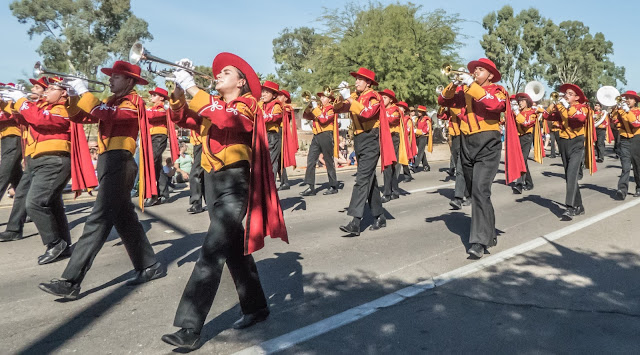 Instead of marching, this school has a riding band. 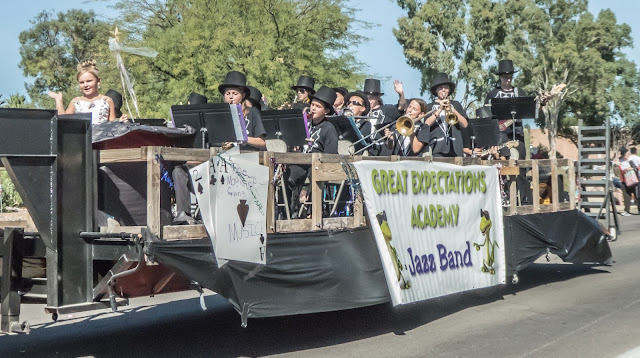 This girl is my hero. She did not falter, wobble, or weave as she walked backward, directing the band. The only thing she could have done that was harder was wear heels. 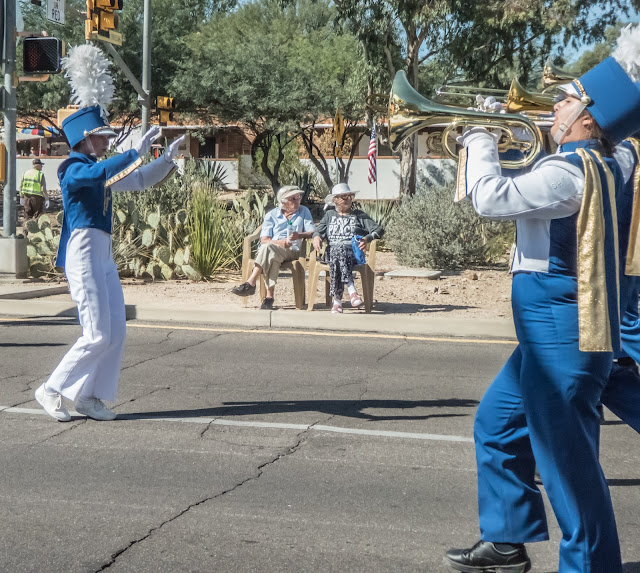 The cutest of the bunch was this pack of Cheetahs who actually did very well with chanting, some fancy leg work, and pom pom shaking. 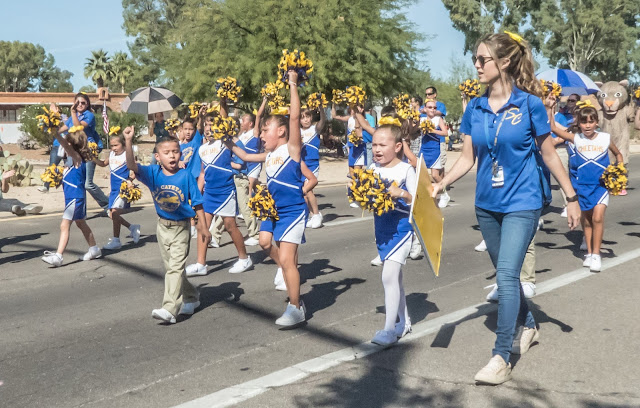 There were also some special interest groups such as the Cub Scouts, Border Patrol, the Animal League of Green Valley (a no-kill shelter), the Rotary, retirement communities, commercial businesses, and the Paws Patrol which came with their van, 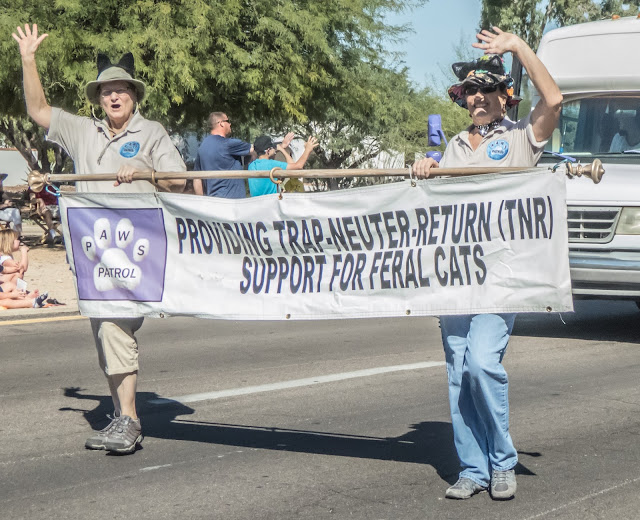 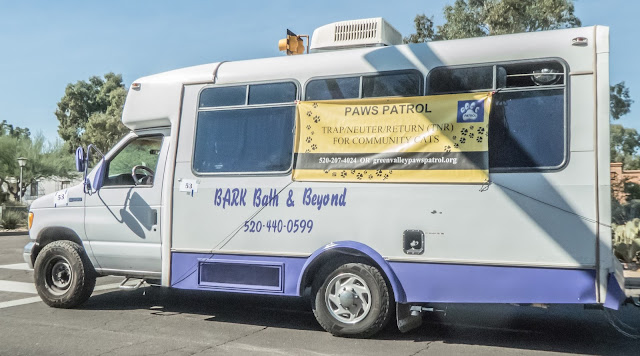 Veterans of the USS Tucson. 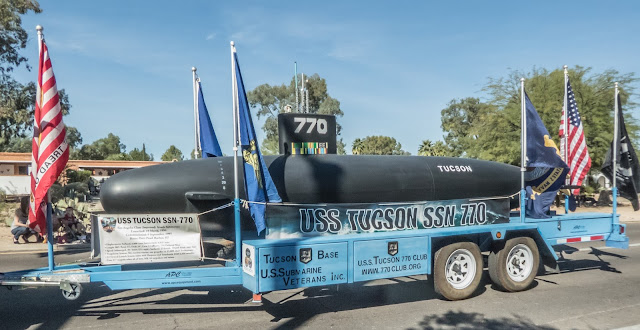 I think there were about 100 entries all told. It was a great way to spend this beautiful, sunshiny morning. Good job, Edie!

If you're not in the parade, you watch the parade. That's life. ~ Mike Ditka