Grace sticking her nose in. (I could not resist.)

Before we go on, Grace wants to be noticed. I don't usually anthropomorphize vehicles, but don't forget Christine and what she did when she got mad.


Bryce Canyon is spectacular. I didn't have the words for Arches and I don't have them for here. How lucky we are to be home to so many, many indescribable places of beauty in this country. Our country! I love to travel and have been lucky enough to have gone to Europe a few times. One trip took me to Tuscany, a lovely part of Italy, but you know what? It was no lovelier than Napa Valley, right here at home. At the risk of going rah! rah! about America, we don't hold second candle to any country, anywhere.

Another view from Sunrise Point. There's a little sun flare going on in the upper left corner.
The National Park Service has been hit with a 5% budget cut for this fiscal year. It has to manage like we all have to manage, but remember arts and culture always seem to be the first areas cut. I'm getting off my soapbox now but not without first suggesting we think about cutting Defense that much and everyone's fiscal problems will be solved. OK, I'm done.

And yet one more. Do you now see why I'm in love with this place?
I will be going back to Bryce, and next time I will haul myself out of bed to see this amphitheater at sunrise. Imagine first light on these colors. Imagine....

There's a rim trail winding around from Sunrise Point to Sunset Point with half-tree-trunk benches placed pretty frequently. The altitude is about 9000 feet and nearly everyone is huffing and puffing so it's a good thing they're there.

I meditate daily. Some days I'm more successful than others, although you're not supposed to think about success and failure. Let me say instead some days I am able to stay more focused. Here, even with people all around me, this seemed to call for a little time on one of those benches with closed eyes and a focus on the breath. It was a wonderful experience. Even with people all around me, there were a few brief moments when all was silent but for the wind. 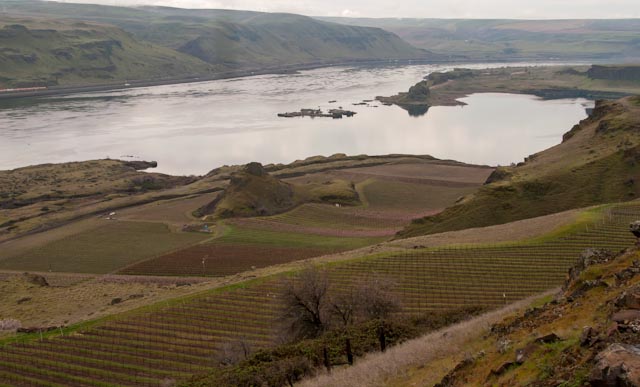 Bridge of the Gods; 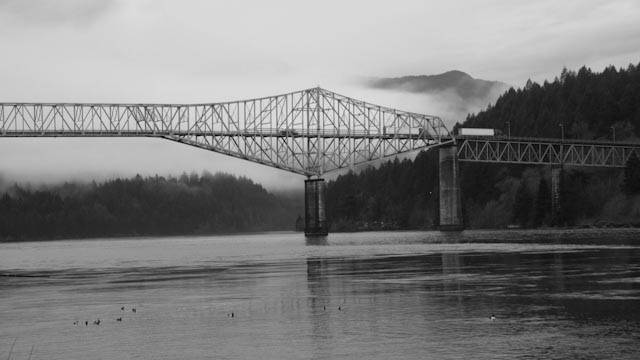 Highway 30, a picturesque road leading to Hagerman Fossil Beds in, um, Hagerman, where Grace wanted in on the picture; 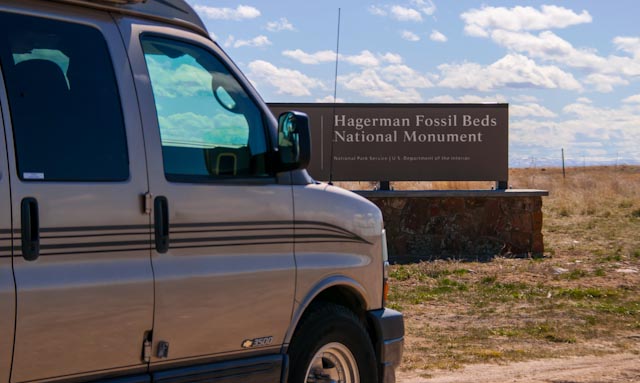 and to Balanced Rock; 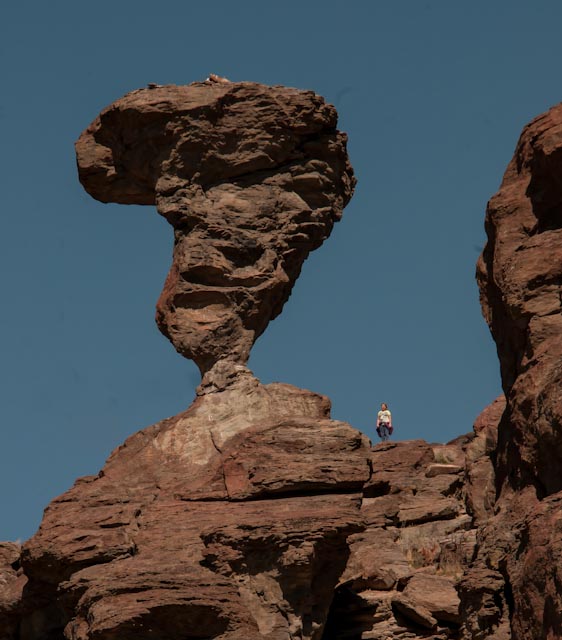 and Balanced Rock Park in Buhl, Idaho, where I boondocked one night and still can't believe that not only was I allowed to stay there, I had the park to myself when the day trippers left. That's Grace in the background. Again. 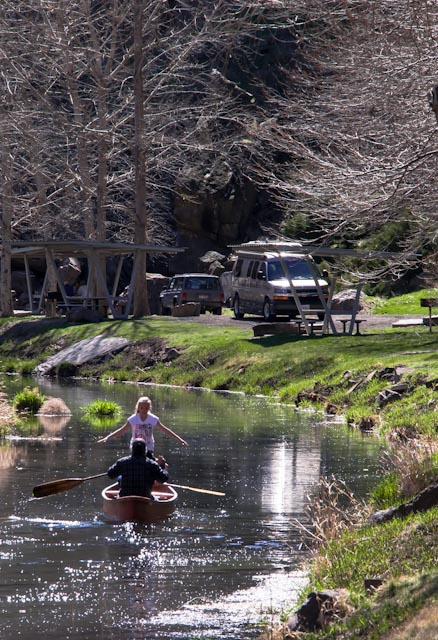 And then I hit Utah. There's a reason one of the license plate choices says UTAH!. I've traveled some here and there and I have never seen a more breath-takingly, heart-achingly beauty than in Utah. Have you ever experienced depthless beauty in whatever form - music, art, a brand-new baby, a spiritual awakening, looking into your lover's eyes - that has so filled, filled, filled your heart that you almost can't stand it, that if you look or listen or stay in that moment for one second longer you know your heart will burst with joy? I hope you have.
It is transcendent.
It is unforgettable. 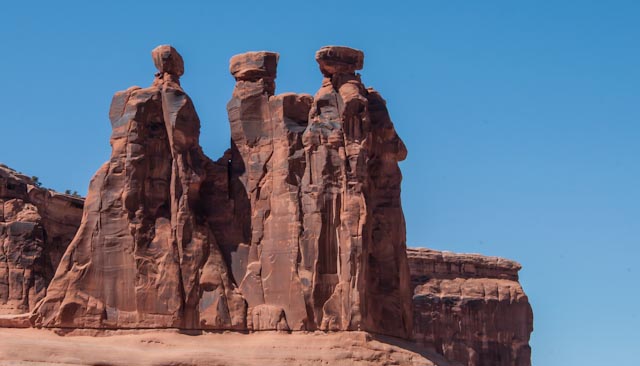 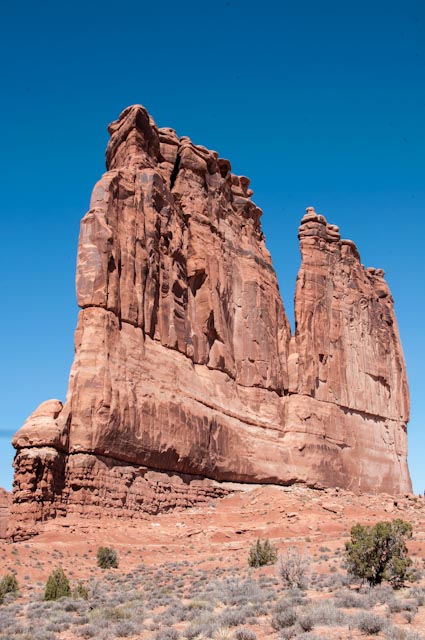 I drove up a long, steep road into Arches National Park the other day and thought my heart would explode with the joy of the magnificent loveliness everywhere I looked. This sounds pretty darned flaky but if you have ever been overtaken by this powerful awareness you know exactly what I mean. I will never forget how that place made me feel. I was, most simply, touched by grace. It was elevating, humbling, exhilarating, and bittersweet. I knew I would have to look away but I also knew it would stay with me. It was one of the most power-full moments of my life.


No photo I could ever take can do the place justice. That night I boondocked in Manti-La Sal National Forest, down a dirt road a couple of miles off the freeway. Nothing there but me, total and utter silence, and a night sky flooded with stars. It was a very good way to end the day.


The next morning I stopped at Newspaper Rock,where the only other visitors were a man my age and his teenage son, from Grand Rapids, Michigan. 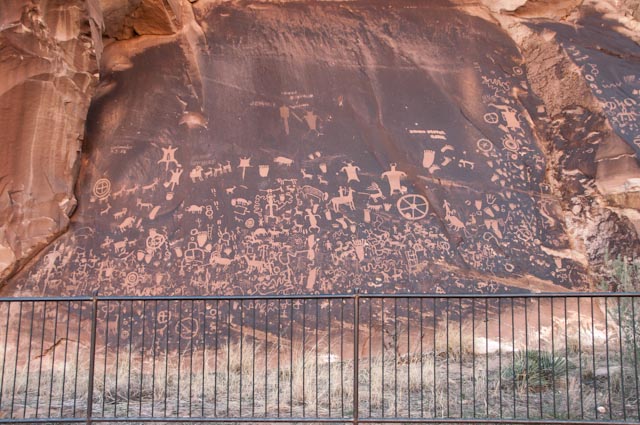 I followed them to another place down the road, an unmarked trail a person at their hotel told them about, and we set off on foot to find dinosaur tracks and supposedly better, older petroglyphs than were on Newspaper Rock. It was rough, rocky country. We were climbing at what felt like a 45 degree angle and at an elevation of probably 5300 feet, and me in slippery-soled sneakers. I made it, though not without thinking I'd break my ankle any time now, and we saw some spectacular art.


That's a dinosaur footprint, or so we told ourselves. 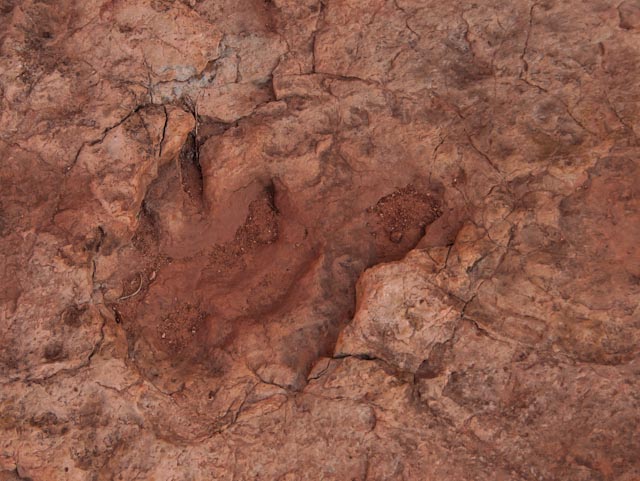 I questioned myself at the start if I was being an idiot, going off into back country with these two men, but I felt no danger at all. They were just two nice people who let me tag along. We then hop-scotched our way down the road to Canyonlands National Park, where they went their way and I mine. Here's Grace again. What a camera hog. 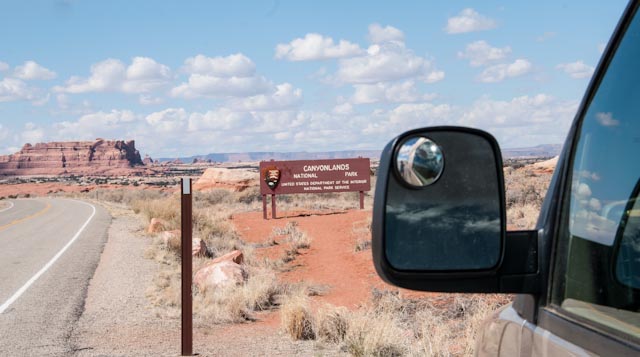 I've met wonderful folks even early on in this trip, people who've extended kindness, offered any help I needed, and engaged in conversation. The freedom in the title of this post means a lot of things to me. One of them is the freedom to talk to people and to learn a little about who they are without the uncomfortable awareness of an I'll wait outside impatience or an all-purpose distrust that have been in the background for years. I lived with that. I accepted it! What an fool I was to compromise my self to keep someone else happy, which never worked anyway. No more.

I may have had this different life imposed on me with unending shards of cruelty, but I will now admit to the world that I was done a favor. I was given a gift I would never have given myself. The divorce was, from the start, all about him despite the words he said, but I am surprisingly feeling like the winner (she said with quiet satisfaction) and life is looking good.

=======
Thought for the day:
There is a road from the eye to the heart that does not go through the intellect. (Gilbert Keith Chesterton)

I know it's been forever. Hell broke out in my life, again related to being Suddenly Single at Sixty, and it's taken me a while to find my way out. Winston Churchill said, When you're going through hell, keep going. That's what I've been trying to do, keep going. The second hell took me back to the beginning of the pain and the fear, and let's mention anger and an overwhelming feeling of betrayal, and I've had to make up lost ground.

It's a little better. I have the best friends in the world, better than I could have ever hoped to have, and they have carried me through when I've been incapable of moving, let alone thought. So thank you, all of you, and you know who you are. I can't ever hope to repay you for your love and support.

A few weekends ago I took my van, who I'll introduce you to a while later, to the Oregon coast for a couple of nights. One of them was spent at Fort Stevens State Park, near Astoria. While I was there I talked to a campground host about volunteering. Campground hosts greet visitors, get them signed in for camp sites, answer questions, do light maintenance, deliver firewood, light duty like that. In exchange, they receive a free site with full hookups for water, electric, and sewer. It can save the hosts a minimum of $20 a night at state parks. The more popular parks charge more. There may be a minimum length of duty, like a month, but in many cases the host can stay for the season. This is a good deal if you really like the area you're volunteering in, and you're not just assigned, you choose the campground you want. Some have more competition from volunteers than others, as you can imagine.

I'd known about this kind of volunteering for some time but it hadn't yet trickled back into my brain since I decided to cruise at 60, and talking to this volunteer got me thinking. One of these good friends I mentioned above told me she met volunteers doing work like this at Glacier National Park and thought I might be interested in one of these short-term jobs. When I got back to the house I started searching the volunteer.gov website, just looking for what was available. It's late in the season for the hotspots like Yosemite, Yellowstone, Point Reyes, or Glacier, but there are still lots of slots for other places.

So here is what is amazing, and proof positive that God does shine his light down on me, or that a net will appear if you just take the leap. Petrified Forest National Park advertised for a librarian to organize and catalog their collection, minimum commitment of two months. I have a masters degree in library science and worked several years as an archivist, which turned out handy because they have work in that area too. And maybe in the museum, working with the collections manager. I am thrilled. So excited. Pleased as punch. I start at the beginning of May and am their woman until the end of September.

I admit to being nervous about heading out to parts unknown with no agenda, just following the lines on the map. I know it's the dream of a lot of people to be able to do exactly that, but I've never done it before on my own and I was scared. It was way more than being nervous. But here is a compromise, a transition that will give me a purpose to my days for several months. I couldn't be more pleased, plus I still get the free RV site with full hookups. What a deal.
at 3:57 PM