The first time I went to Santa Fe I was 17. That spring, about a week before my birthday, I took an ungraceful dive down the front steps of my house while heading out to school. In my defense, I was wearing a groovy pair of purple platform heels. I broke my leg and spent the next eight weeks in a cast. At that time I was in the midst of a deep crush on my biology teacher, all of 7 years older than I. He arranged with my mother to drive me back and forth to school in his baby blue VW. Be still, my heart! To this day I don't know how he got my mother to agree to that, except she had no other way to get me to school. Then, to her dismay because I'm sure she thought she'd let the fox into the hen house, when he decided not to return to teach at my school the next year so he could finish his Masters degree, he started calling the house, asking to take me here and there. Yes to a Detroit Tigers game but only with my little brother as chaperone. Yes to a fantastic used bookstore in downtown Detroit, and I don't know how he managed it but we went without a chaperone. But no to a Bob Seger concert. How could she?! I think it was about this time she came to the conclusion that a trip to see my older brother in Albuquerque would be a great idea and off I went.

Part of the entertainment my brother arranged was a trip to the Santa Fe opera. I'd never been out of the Detroit area, had never been on a plane, and for sure had never been to the opera. It was magical. We saw The Marriage of Figaro. It was outdoors on a silken summer night and I'll never forget that I got it! I actually understood what was going on.

But on to last week. When I picked up P at the airport we headed north to Santa Fe. I think I could live there if I could afford it which I can't.

One of my favorite things to photograph is churches. Maybe it's a holdover from being force fed Catholicism, but I love the old style churches and the just-out-of-reach mysteries they hold. The Basilica of St. Francis of Assisi in Santa Fe is a beauty in the traditional style and I was enthralled as soon as I stepped in the door. And for the spiritually aware, here is another powerful place. I felt it, no question.

I usually photograph churches with a tripod and take a couple of hours doing it, but not this time. Mass was starting soon and I had time for just a few hand-held pictures.


Not much of a picture but I love the legend. Don't just love one another, but do it constantly.


The play of light through stained glass windows is always interesting - not just the illumination of the window but the unintended places it falls.


This is one of the most realistic (what I think realistic would look like) crucifixion statues I've seen.


An honest-to-goodness relic of St. Francis. Who am I to say it's not?


Stations of the Cross are a favorite detail of mine, partly because they're unique.

We also went to Loretto Chapel.This is the place with the famous staircase that has two 360 degree turns and is said to have had no nails used in its construction. Legend has it the carpenter was St. Joseph. It's lovely and graceful. 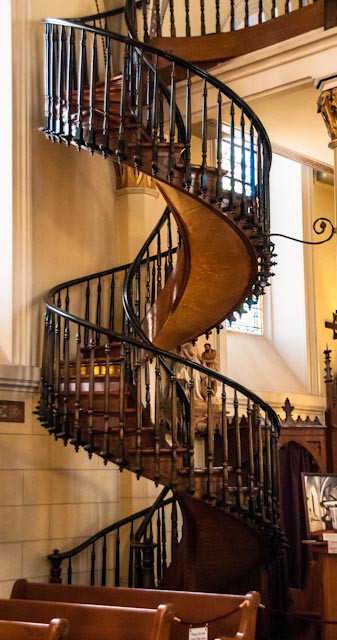 The altar is wood painted to look like marble and you could have fooled me. 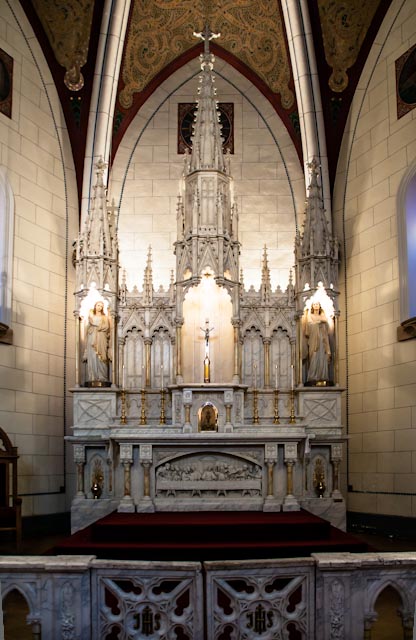 Leaving there, we pursued more earthly delights with a wonderful meal of tapas, dining al fresco, another favorite thing of mine. I have a lot of favorite things. P persuaded me to have my picture taken but only with the assurance it would be taken from a distance and with a double layer of gauze over the lens. 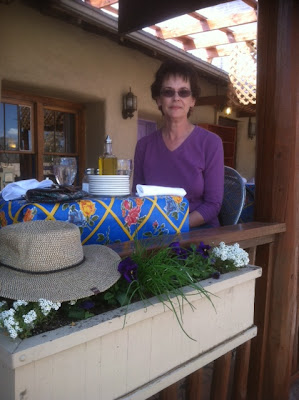 As if there aren't enough places to go, Santa Fe is on the list of places to revisit. Taos, visited later in the week, did nothing for me, but Santa Fe is special.

P.S. The biology teacher? I graduated the following year and prepared to go off to the University of Michigan, thinking hot damn! I can see [this guy] now; Mom won't be there to say no all the time. What did he do? He went off and got married. I just know, 42 years later, that he still pines for me and had to settle for second best.

Thought of the day:
Nothing spoils the taste of peanut butter like unrequited love.  (Charley Brown (Charles Schulz))