When I got here in late April and began to learn about all the research that goes on in the park, I started thinking along the old familiar path: oh, I wish I'd studied archeology/paleontology/biology/zoology/botany. But probably not entomology. Except for entomology, everything interests me and that can be kind of distracting. I'd be the first person to say it's never too late to go back to school for whatever turns you on. I went back for my masters degree when I was 50. My friend P, who traveled with me for a week in April, earned her masters when she was 50. But there's also reality and my peripatetic lifestyle may be an excuse but I don't see how formal education would work for me right now. I do, however, take whatever opportunity I can to observe, ask questions, and try to learn something new, but in a more informal manner.

This deep philosophy is leading me to talk a short while about archeology and show real-life examples of what their life is like around here. The archeology folks are the culture people as opposed to the fossil people that the paleontologists are. Archeologists are interested in the human ancestors, where they traveled, how they lived, what they produced, what their beliefs and ceremonies were. The study can be back to the beginning of human life or pretty darn recent.

One day the archeologist led a group out to old Route 66, which parallels Interstate 40, inside park boundaries. Petrified Forest is the only national park to host a section of the mother road. The lesson that day was not just seeing objects, the trash that still exists along the remains of the road, but also putting them in context. How does this liquor bottle reflect changing times? Rusted Spam cans - what do they mean in the context of traveling this road? Check out the bottom of the soda bottle and see that the bottling plant was 45 miles from here, not in Atlanta. Think how interesting it is and you can see how I get pulled in this direction.

So one day I happened to be looking out the window at work, just resting my eyes, I swear, and saw a truck full of archeology people pull into the parking lot. I'm aware of how cooped up my work keeps me, and am often envious of the teams that head out to the field day after day. But then, as I say, I saw the truck pull in. It was the day after one of the better monsoons and seeing this - mess - brought back all the times I've seen them and the paleontologists coming back from the field dragging, filthy, and exhausted. 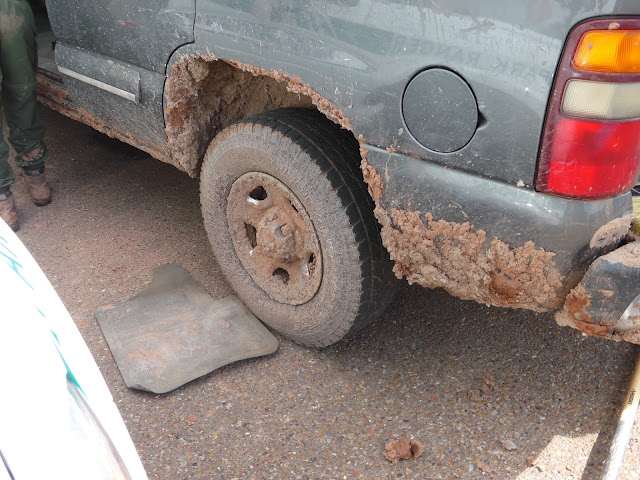 Several people piled out and I don't know how some of them drew the short straws, but maybe four of them stayed behind to clean up the best they could. One of them dragged out the floor mats and rather dispiritedly dropped them in a puddle and kind of swished them around with her feet. They weren't going to be clean but she was trying to get the big chunks of mud off. 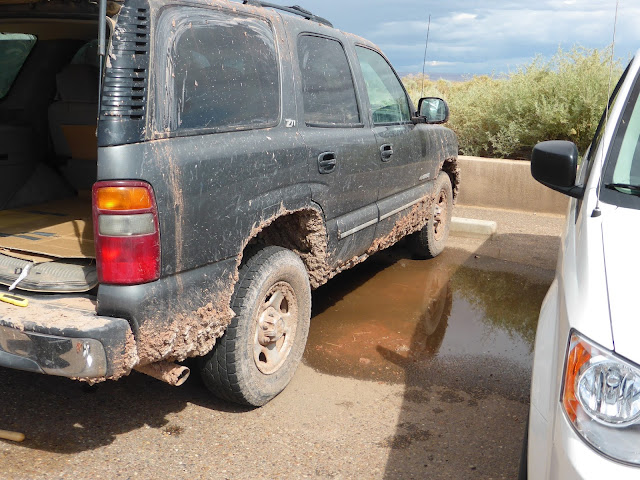 Another one went to the recycle dumpster for cardboard boxes to reline the cargo area. I remember riding in this truck when it was brand new and everyone was afraid of breathing in it, they wanted it to stay so clean. Ha! 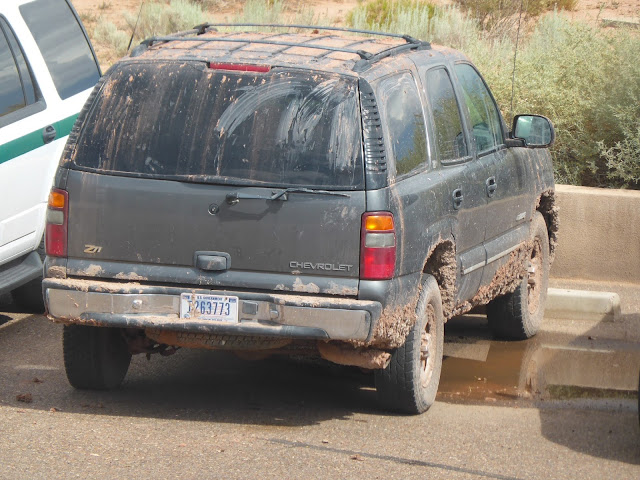 There is nowhere to wash it because of contaminating the ground water with possible oil drips, things like that. It's a park service thing and it's just not allowed. All they could hope for was a good hard rain.

But here's the really good one, the photo documenting what put them in the condition they returned in. This is my photo of their photo. All of a sudden, being a cooped-up librarian looked pretty appealing. 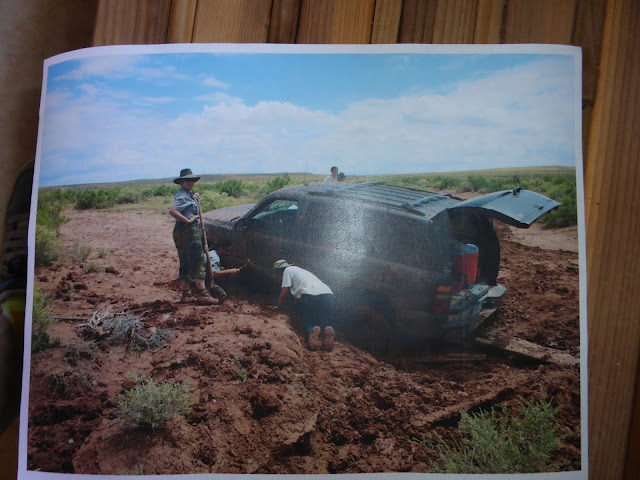 Last week we gathered for the annual staff, volunteer, intern, and seasonal employee photo - everyone in the Resource Management department, including one researcher. The tall guy in the back row is Bill the archeologist. The guy seated second from the right is Bill the paleontologist. My boss is next to me. All in all, a great group of people to be around and absorb from.

I'm a dirt person. I trust the dirt. I don't trust diamonds and gold. (Eartha Kitt)