All creatures great and small

After coming home one afternoon to find a gigantic snake heading for the shade under the picnic table, I now take a glance around before putting my foot just about anywhere, including bare pavement. It turned out to be a harmless gopher snake, harmless even though it was about 3 feet long. Somehow all my photos of it have disappeared but they weren't that good anyway because it was doing a good job of hiding.

Other snakes have either shown themselves, like the rattler we saw on the road during the night ride,

or leave just a trace behind, like this track I found on old Route 66. 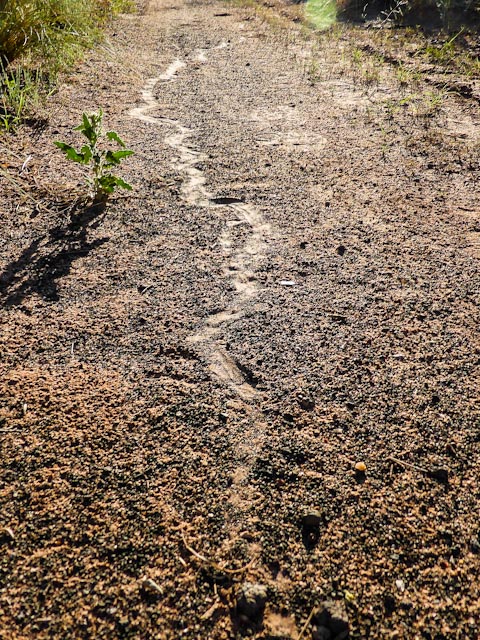 Then there are the snakes that are caught as part of a wildlife survey the biotech performs all season, like these two that she brought to show me. 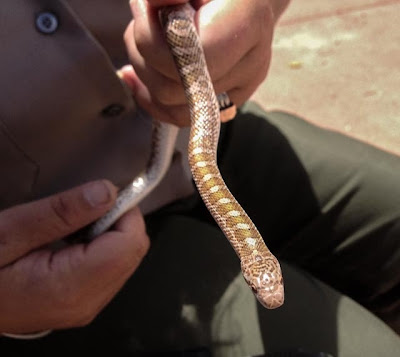 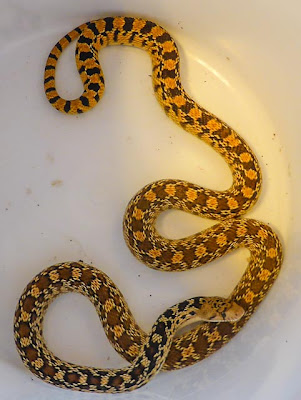 I don't remember this one's name. It was a little on edge, so she left it in its bucket and I photographed from a safe distance. She weighs and otherwise documents everything she traps, then returns them to where they were found.


I saw this guy just the other day and should know its name but am honestly too lazy to find out. It was warming itself near Puerco Pueblo. 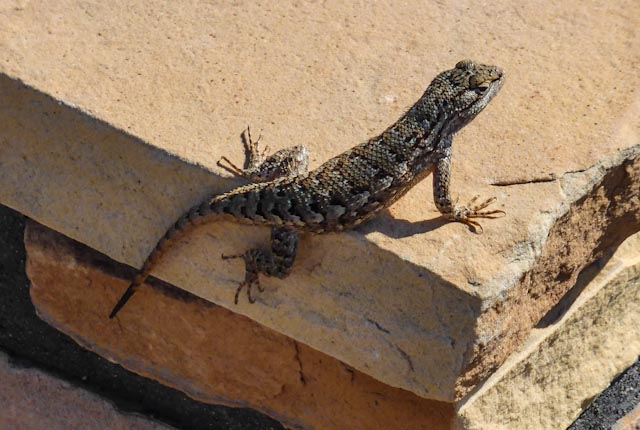 The same is true for this chunky one, distinguished by its turquoise belly, that I saw on the trail into the Painted Desert, aka The Trail from Hell.

This is a horned lizard, which I know only because my friend who was with me told me so. It has a gimpy front left leg; every shot I have shows it tucked underneath. It was also seen at Puerco Pueblo. 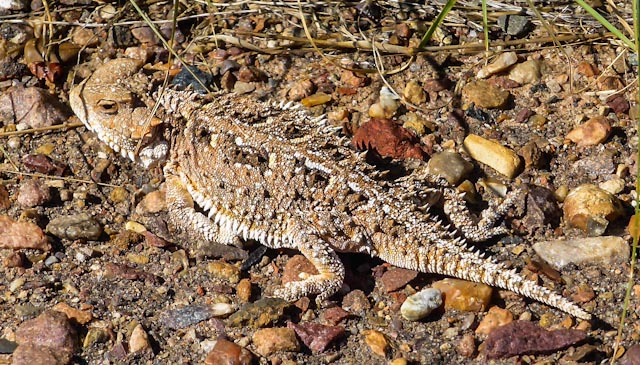 And my all-time favorite, a collared lizard. I was so proud to have gotten pictures of this one, thinking I'd found something unusual, only to find they're pretty common. Isn't it handsome, though? I spotted it early on in my time here, on the Long Logs trail. 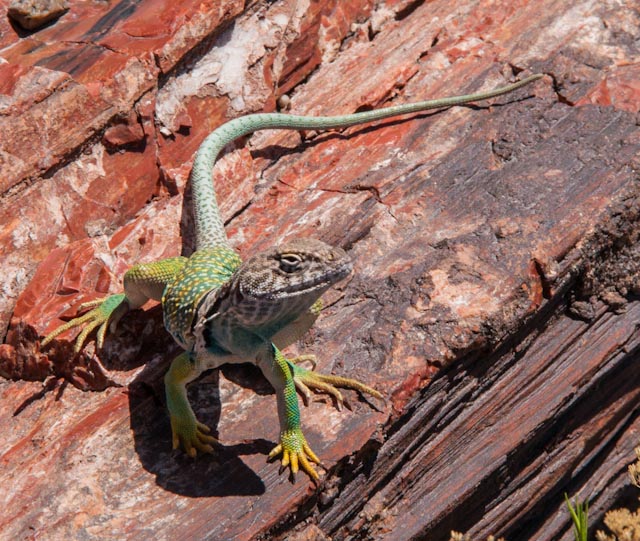 Then we have the various flyers. This raven was trying its best to cool off on a day that didn't feel all that hot to me, but then I don't wear black feathers. It was sitting on a wall at Crystal Forest. Gorgeous. 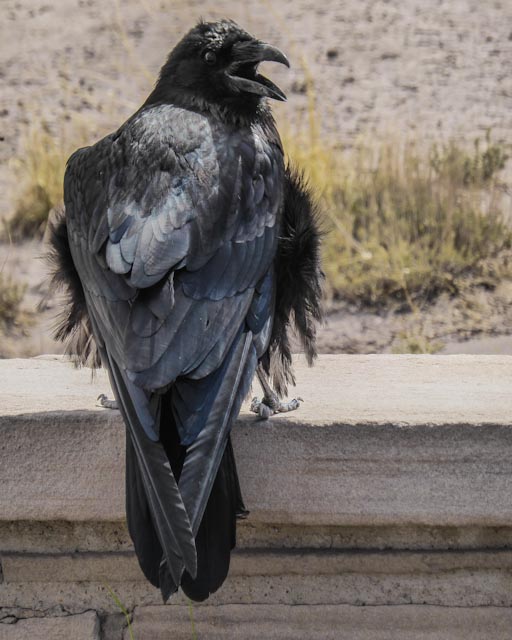 Normally I wouldn't save, let alone show in a public place, a photo as blurry as this one, but I just couldn't leave it out. This is a hummingbird moth. I watched it flit from flower to flower, extending a proboscis just like a hummingbird, and thought it was the smallest one I'd ever seen. Then I saw the antennae which you can kind of see angling out on either side of its head and knew it was no hummingbird. It never landed anywhere and this is the best I could do on the wing. 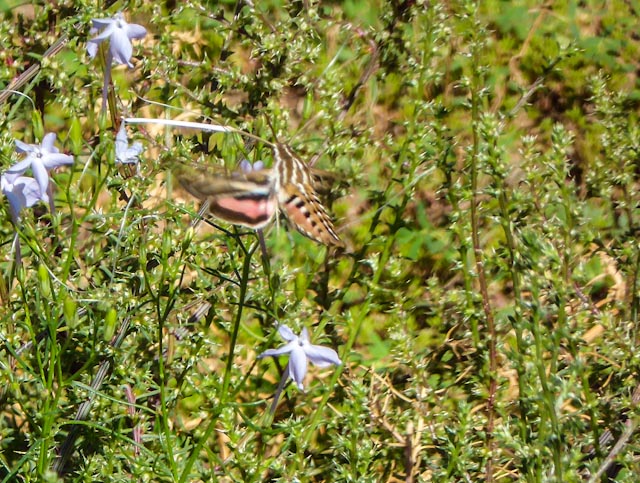 I think I've seen more monarchs here than in my entire life combined. They don't stay still for long. 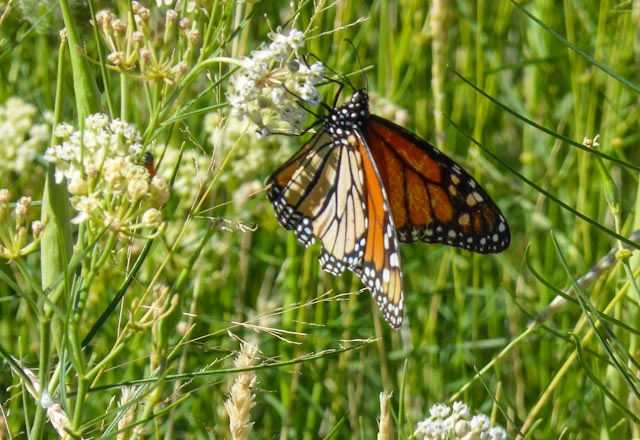 I think these are monarch caterpillars. I've rescued a few from the road and put them back in vegetation where they belong. 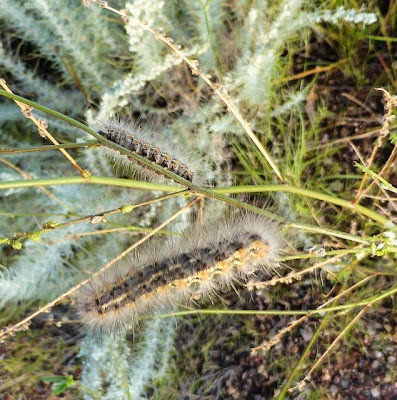 [edited 9/6: wrong on the ID on the "monarch." This is a monarch caterpillar:

I still don't know what the fuzzy one is.]


I don't know what this one-incher is. I found it on old Route 66 one day. 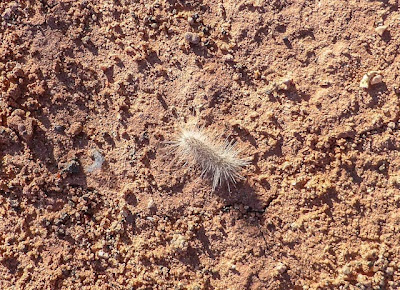 Another unknown. They're all over and usually on the wing, so it was just chance I caught one at rest on Route 66 the same day I got the caterpillar above. 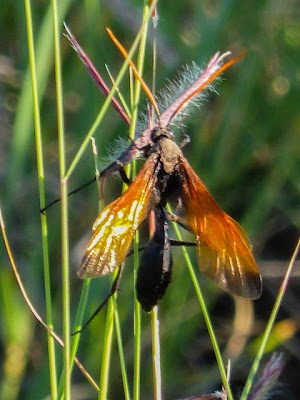 You just have to hand it to an ant. Look at the size of the seed this one's carrying - more mass than itself. I think I can, I think I can. 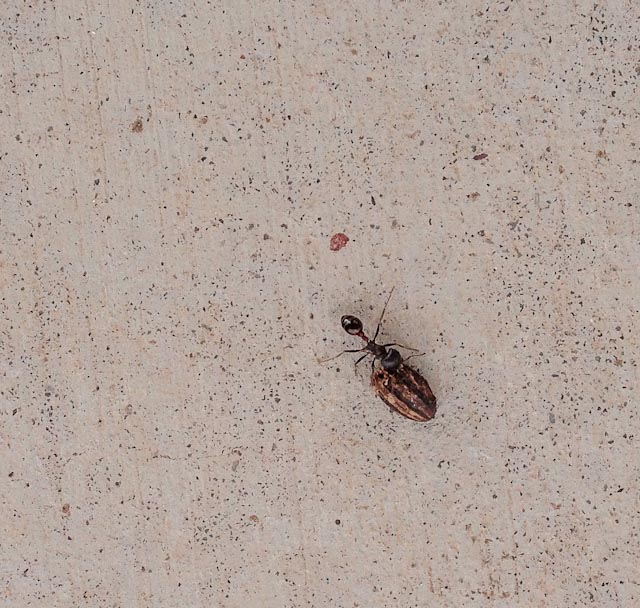 How totally cute is this little guy, spotted at Blue Mesa. A chipmunk? I don't know. What I call chipmunks other people call ground squirrels. 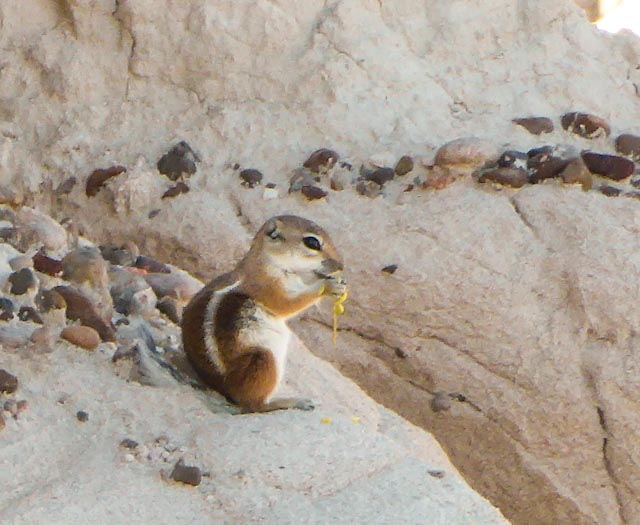 A really beautiful coyote, spotted near Newspaper Rock a couple of days ago, unsuccessfully hunting and pouncing on something in the grass, 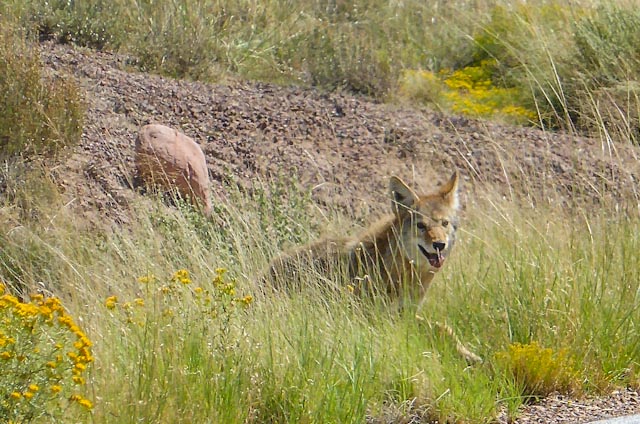 but nothing as large as this jackrabbit. 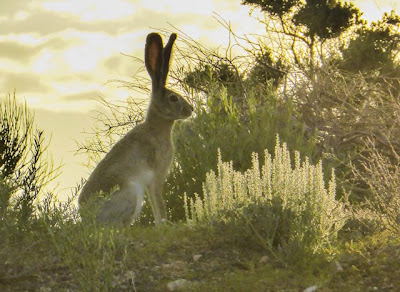 And then we have domesticated animals. There are two horse-rangers that perform really good public relations in the park, Pintado and Trooper. They're ridden by people-rangers and are a hit everywhere they go. Pintado, on the left here, performed admirably by laying his chin on the girl's shoulder when her mother took her picture. Trooper used to be a race horse and had to be taught different manners when he was being taken out to the public. They're both gentle, calm animals that are great ambassadors for the park. 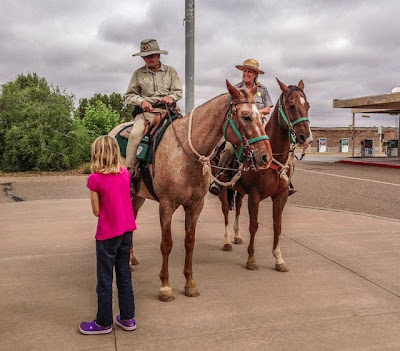 These rangers spotted me with the camera pointed their way and obliged with a friendly wave at the close of one beautiful evening on the road to the Painted Desert Inn. 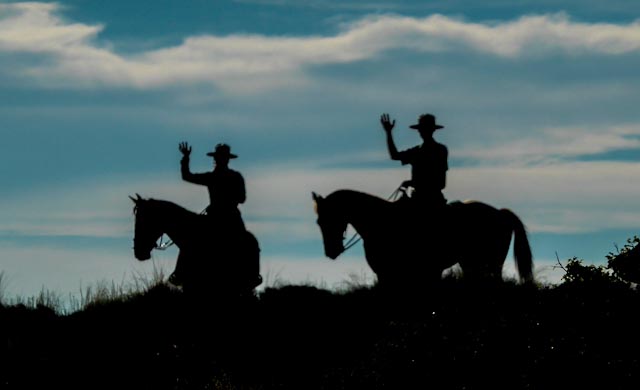 Animals don’t lie. Animals don’t criticize. If animals have moody days, they handle them better than humans do. (Betty White, If You Ask Me)