Yesterday was a busy day. I was up early to try the North Kaibab trail to the Supai Tunnel again and wheezed and sweated my way out by about 10:00. It was beautifully cool on the way down but by the time I turned around with regretful resignation that I'd put myself through this again, it was inching past 80. That's not so bad if you're lying on the veranda with a cold one in your hand but hiking out of the canyon, even just as far as I went, is grim. Because it's so hard for me, I was sure the trail's slope is at least 30 degrees - oh, all right 20 - but when I put HH to the task of determining slope for me because somehow I missed that in school, he put it at 7. Seven? Is that all?

After I got home and recovered we took off for Lees Ferry, on the Colorado River. There was actually a ferry here, established by a Mormon, John D. Lee, but this was six years after other Mormon pioneers, led by Jacob Hamblin, built a raft and made the first successful crossing of the Colorado, in 1864. Hamblin made the trip to warn the Navajo of northern Arizona to stop making raids into Utah, stealing livestock, and threatening Mormon expansion, all under the white-guy authority of Manifest Destiny.

Lee was sent here by Brigham Young because of his supposed role in the Mountain Meadows Massacre. He became the sole Mormon scapegoat for the murder of 120 eastern emigrants, was excommunicated, and sent out of sight, out of mind.

The Mormon Church provided lumber and labor to build the first real ferryboat at Lees Ferry, first launched in 1873. In 1877 Lee was finally executed for his role in the massacre, the only Mormon ever held accountable. Lee's wife, Emma, took over operation of the ferry and farmed the ranch for several years. A couple of years later, the Church bought the ferry rights from Emma Lee for $3,000, and sent in someone else to run it.

Tour operators make this one of their starting points for trips down the river. Another volunteer here on the North Rim has just gotten back from a two-week trip. I thought that would be a great thing to do so I looked it up. A one-week trip is about $3000. Holy smokes. It's not happening this year, that's for sure. 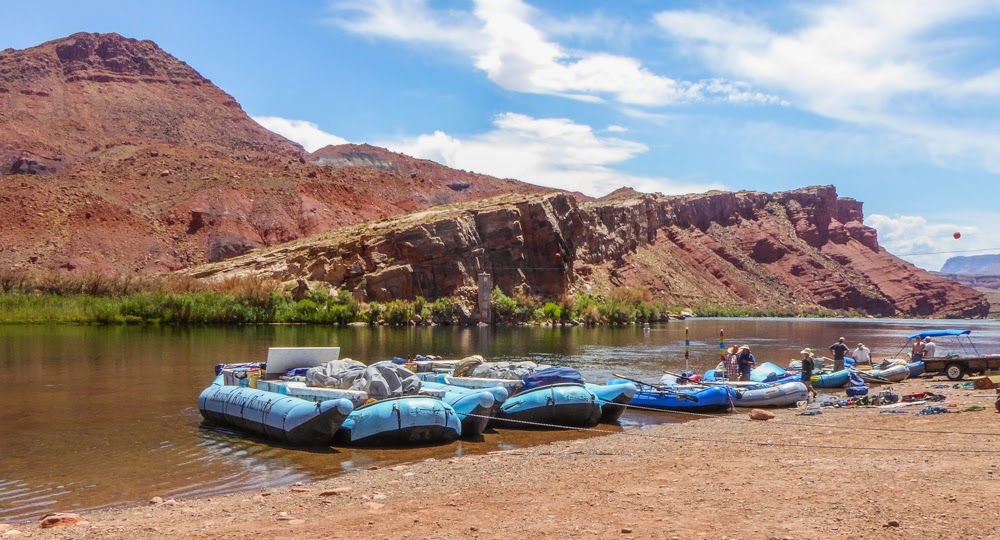 I drove down the road a bit, pulled into a parking area for a beach, and walked over to the river. That river floods! There was washed-up debris all the way back to the parking lot. 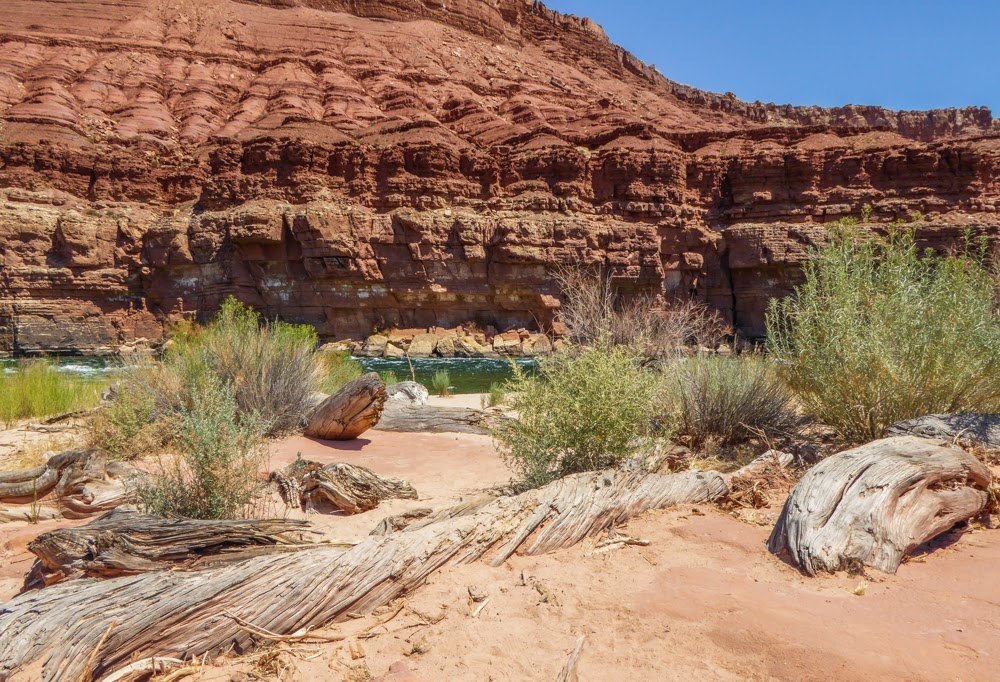 I talked to a man and his wife who were fishing. They drive in from Tuba City, about an hour away. I can understand the attraction. The river is beautiful and this spot is the confluence of the Colorado and the Paria, which causes not-quite-rapids, but pretty riffles in the water. What I couldn't understand, though, was how they could sit out there in 105 degree weather with no shelter. 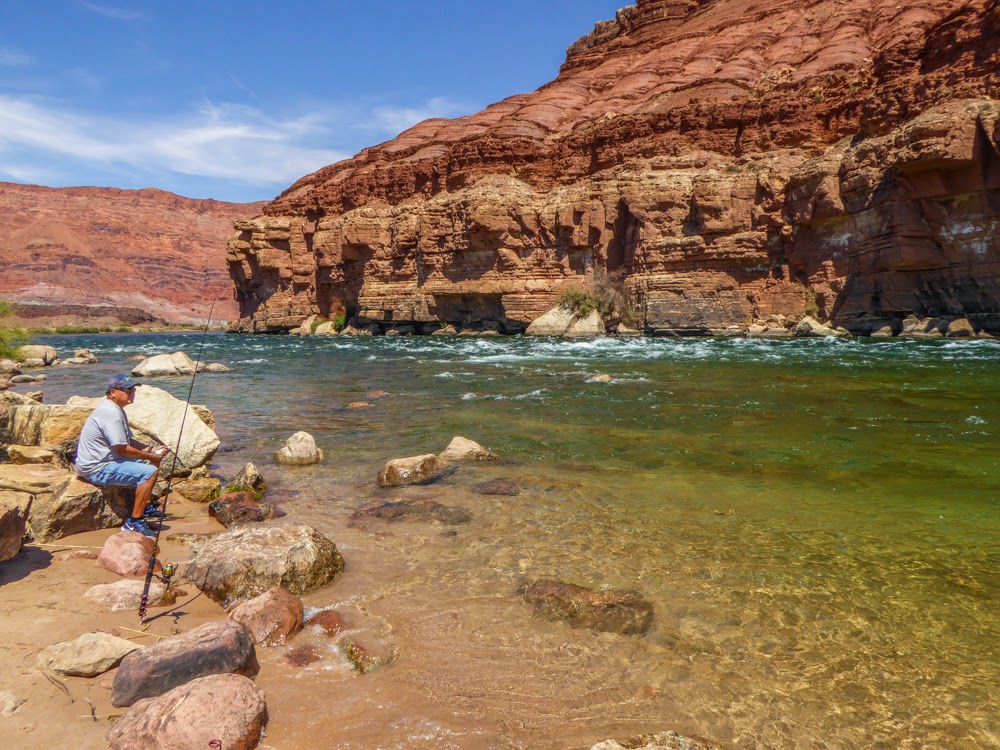 While I was there he reeled in a trout and said he's had pretty good luck all day. 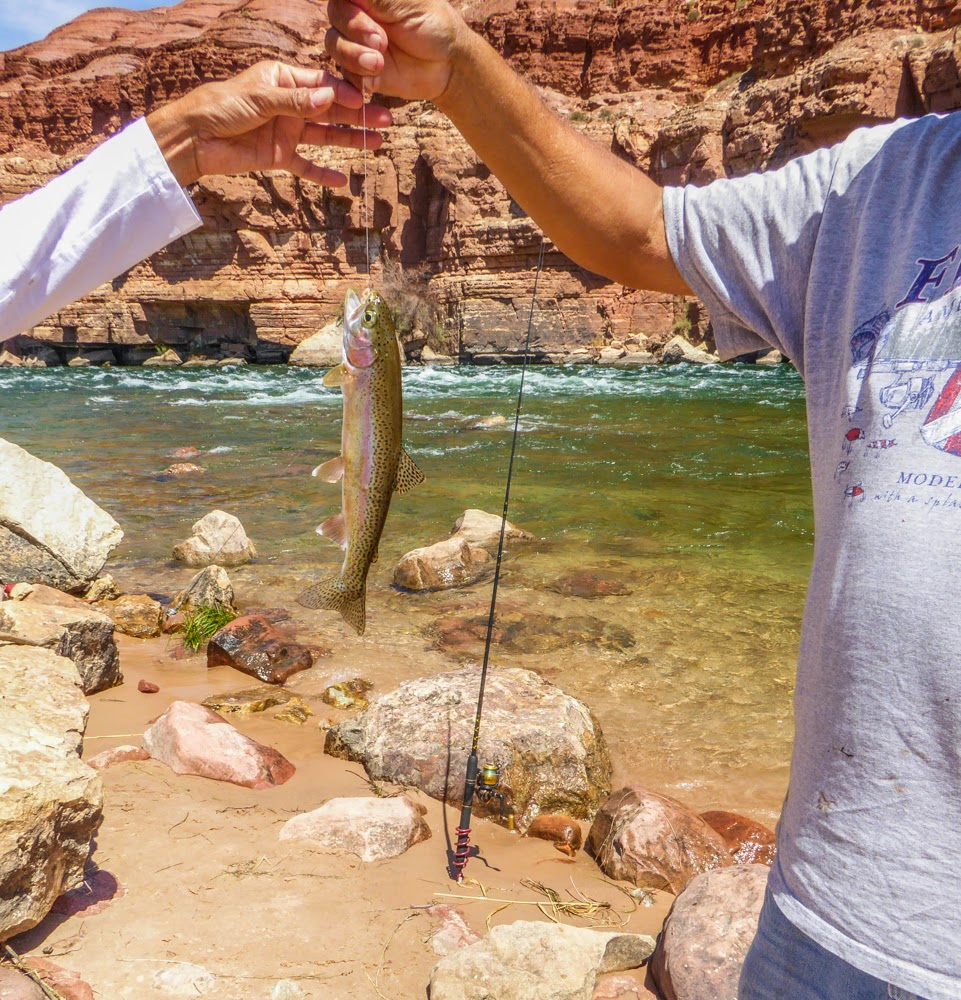 Several boats made their way past this spot a little while later. $3000 or not, it would be a great trip. 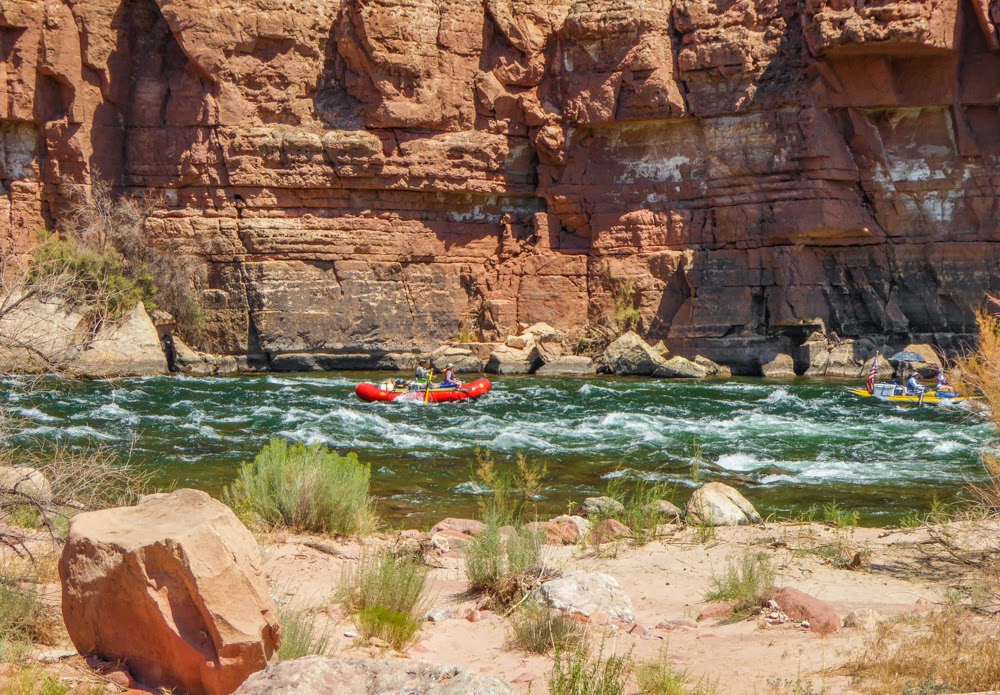 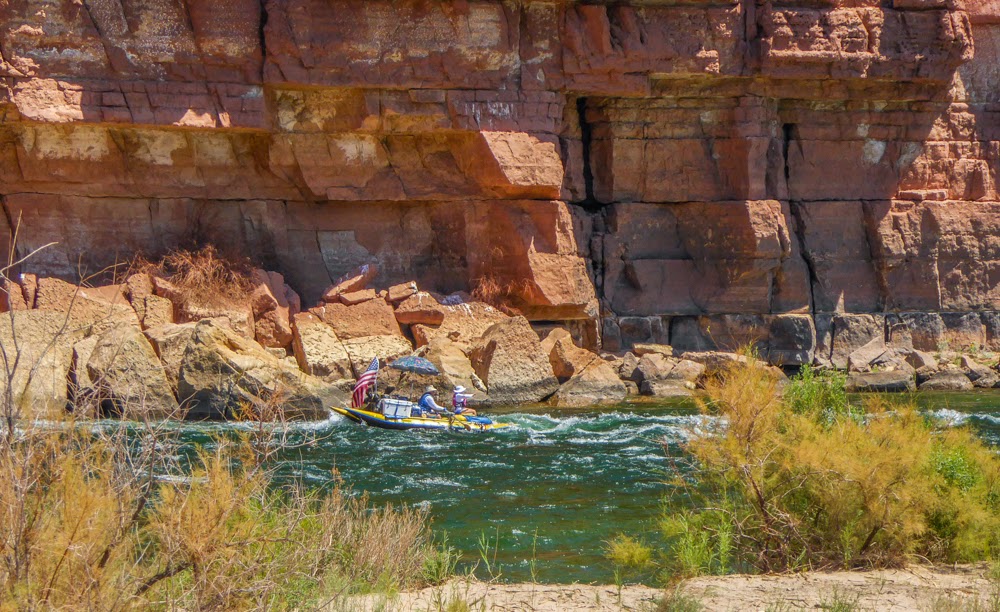 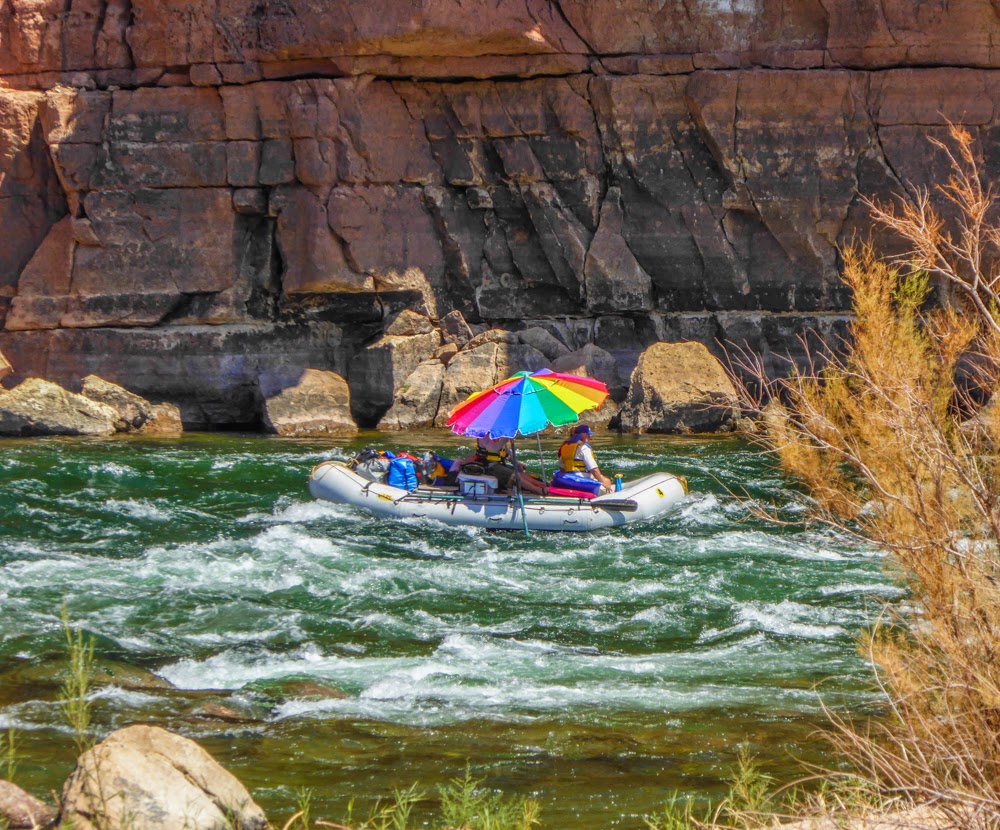 I got back into air conditioning and we drove back the way we came, along the Vermilion Cliffs. The area is a National Monument. 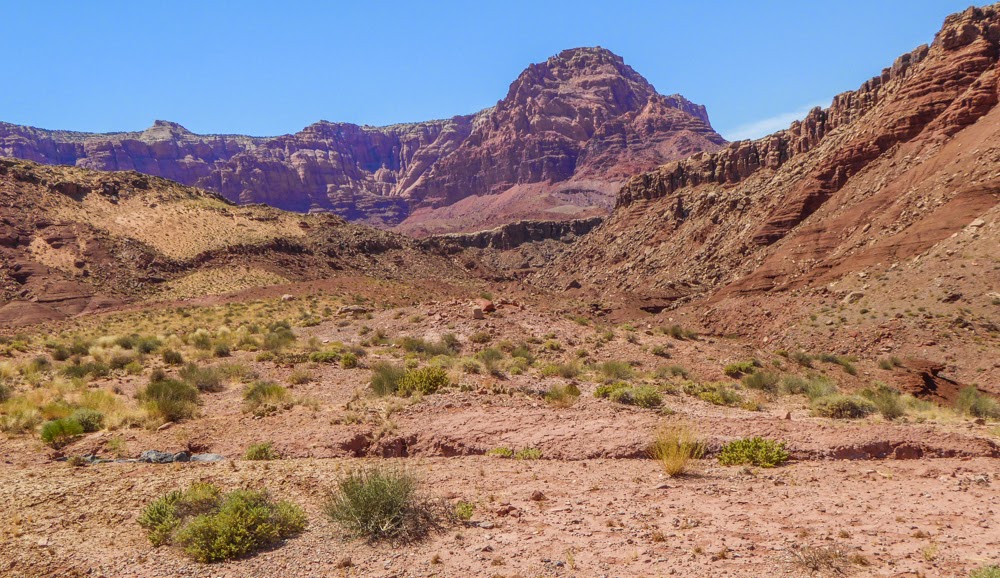 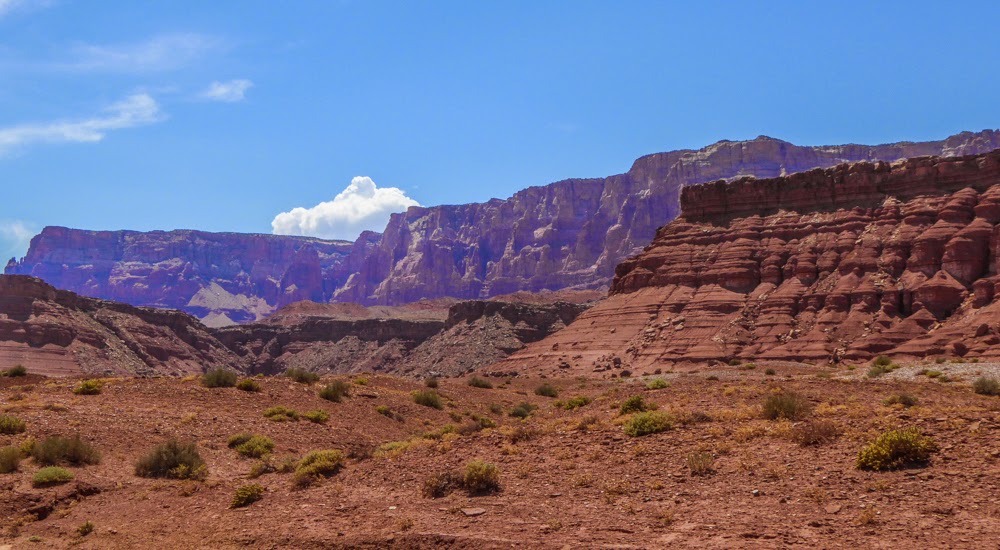 Was I an idiot or what to stand under this rock? I wanted it to look like I was holding it up and all the time I was thinking how stupid it was. 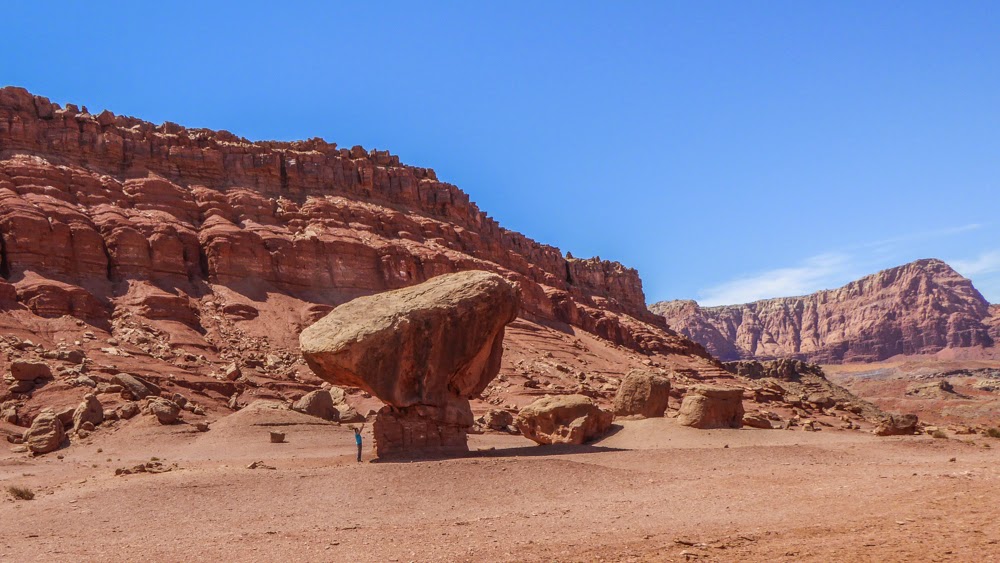 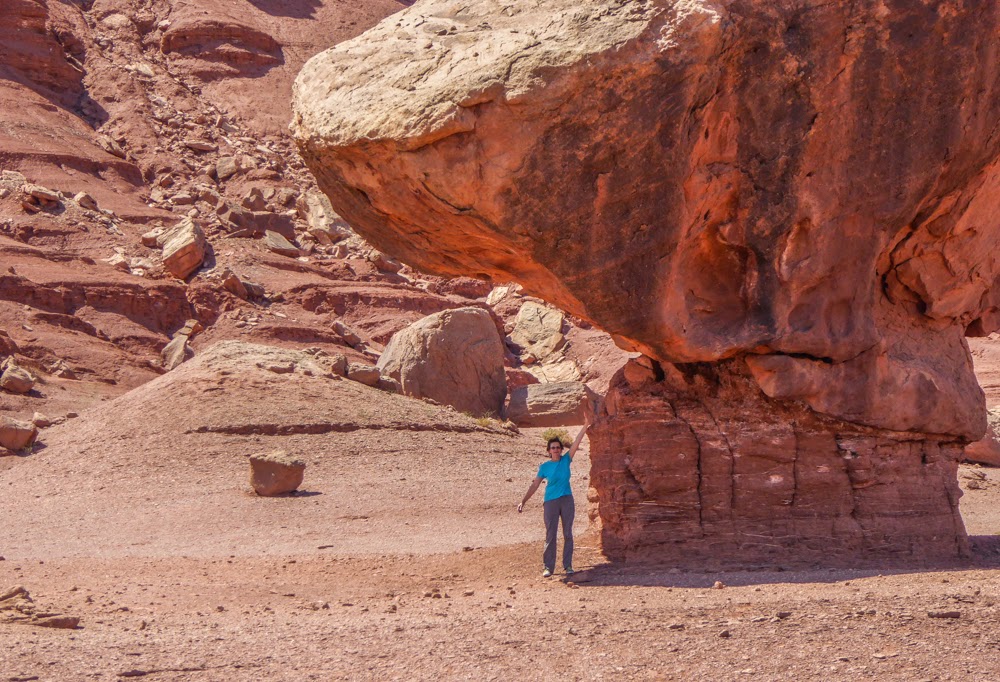 We swung by the Navajo Bridge, which spans the Colorado and is the way to get from the South Rim or Flagstaff to the North Rim.

This plaque was near the bridge. The history of Lees Ferry says that once the ferry was up and running, emigrants flocked to the area to use it even though no approaches had been built to the river. It doesn't look easy-going even after roads were built. 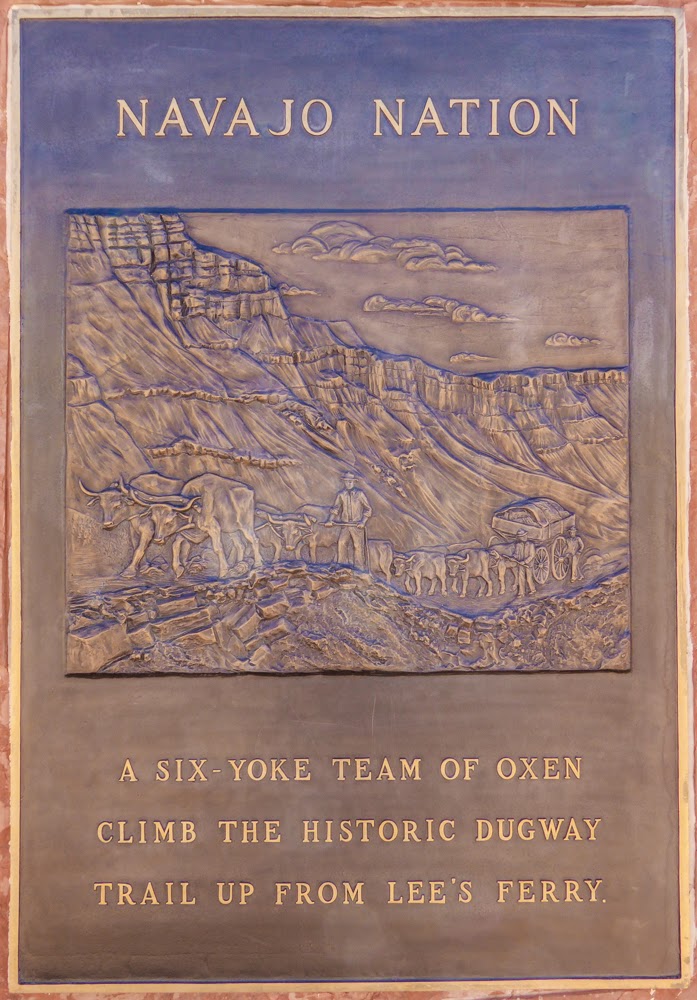 The bridge on the left is the one in use. The one on the right is a single lane and is the one HH remembers using when he was on the Great American Road Trip with his family in the 60s. 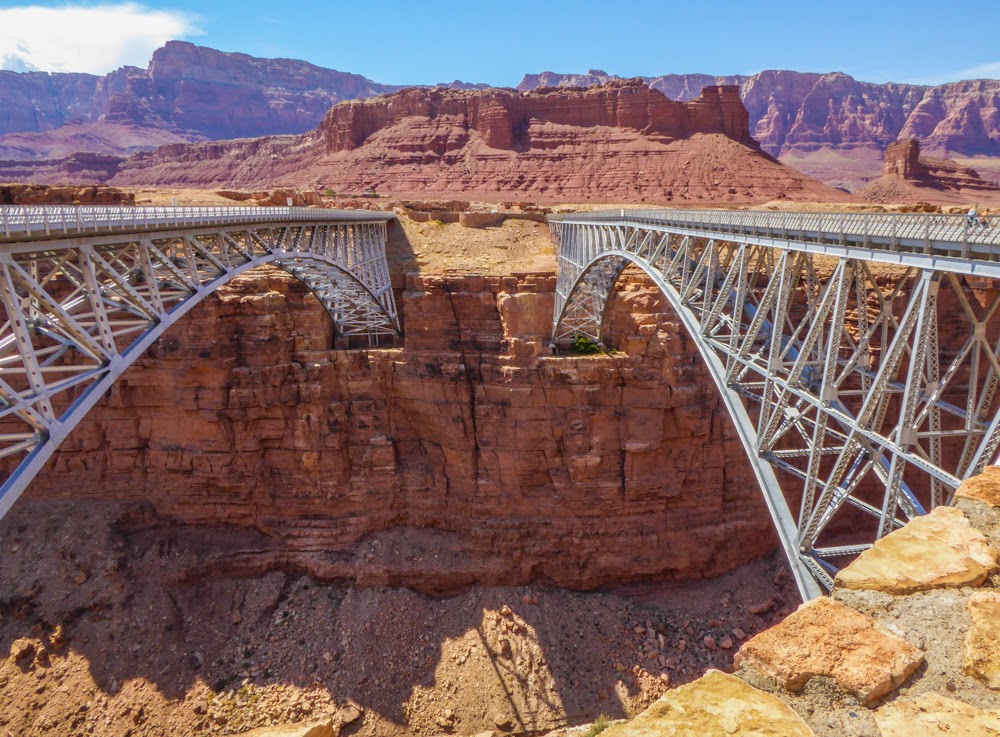 People are allowed on the bridge not in use, so I wandered out. Isn't the view amazing? All those colors in one space. I love the southwest. 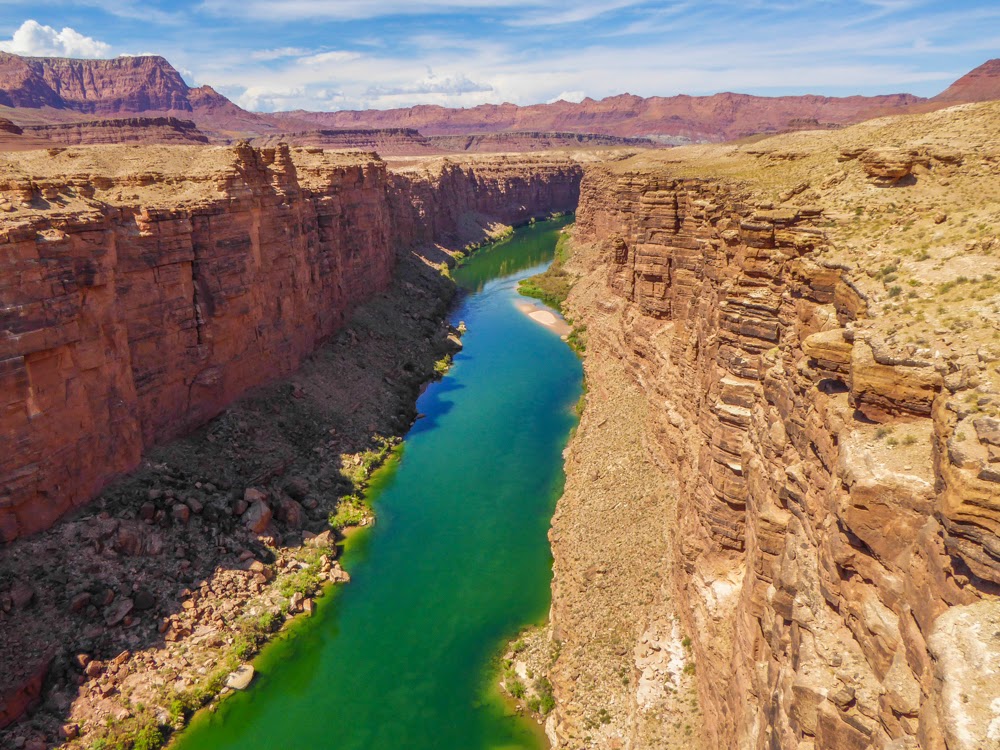 No, I did not lean over. 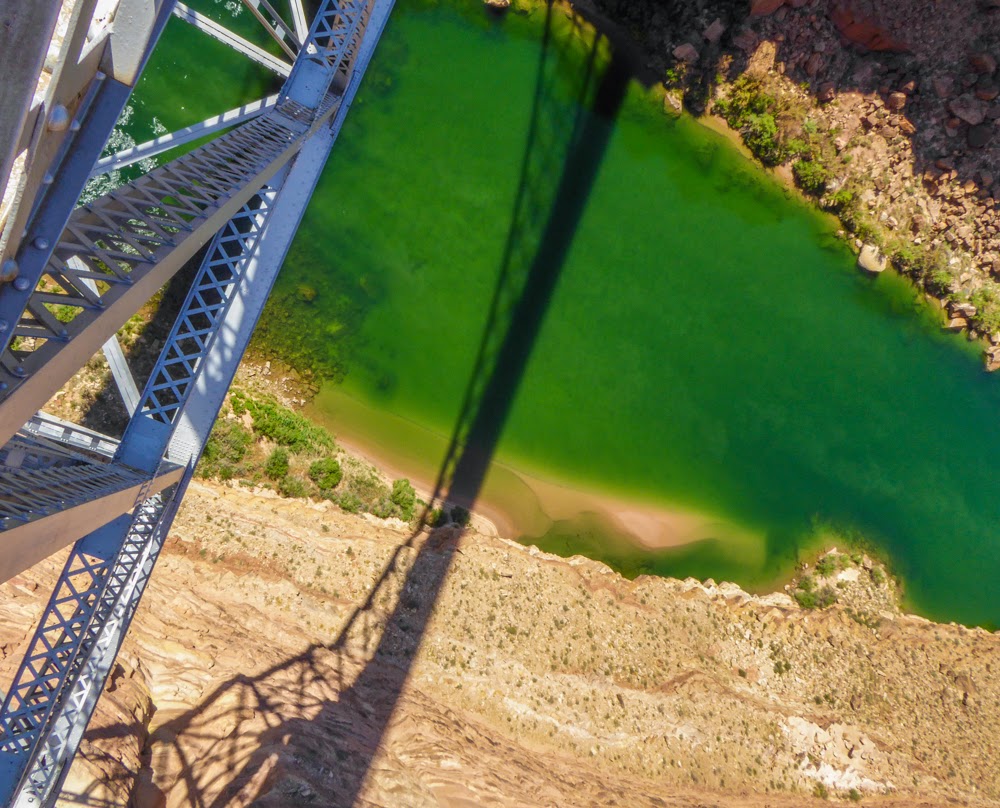 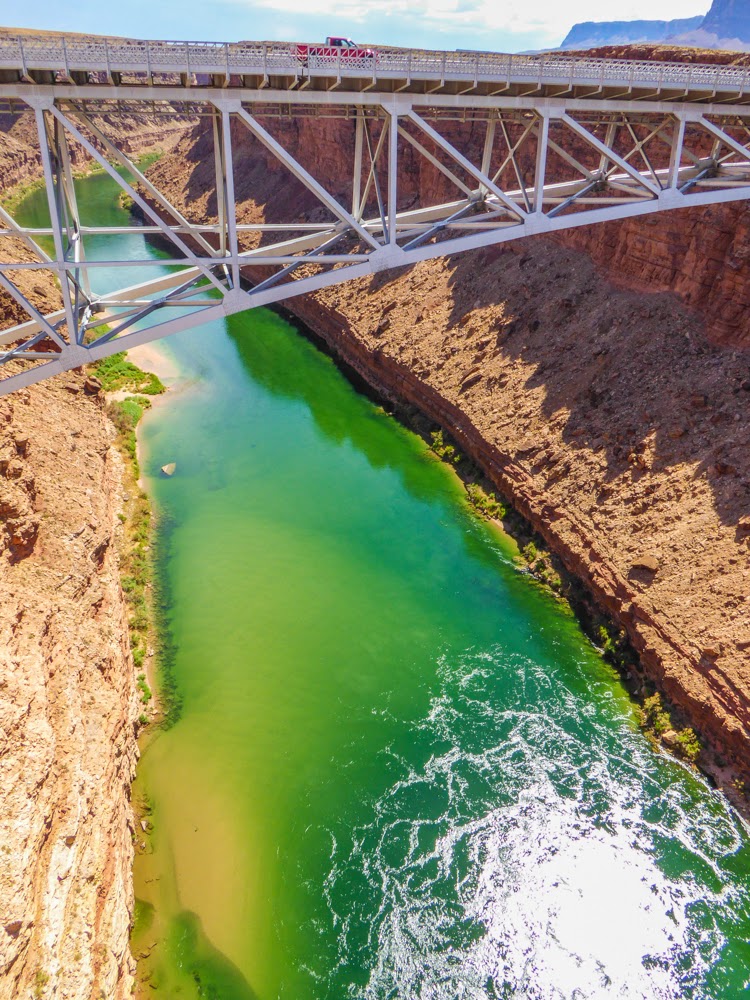 They can count on me. 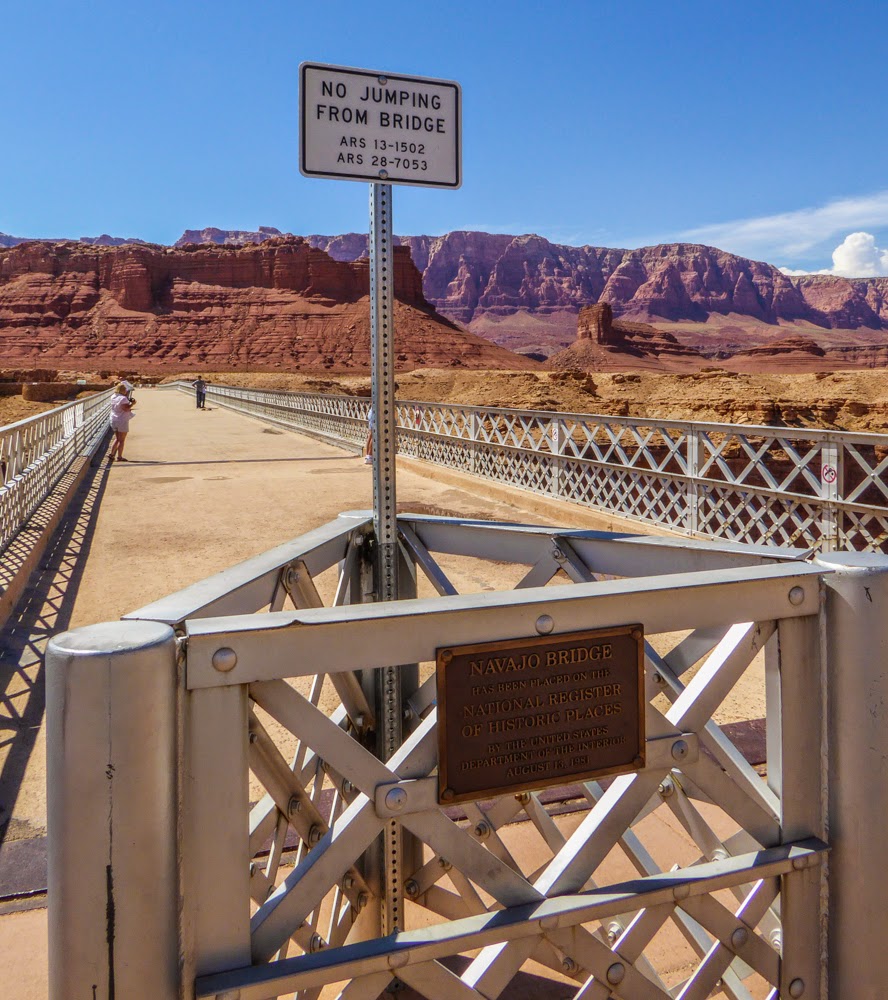 Somehow I found out about a restaurant that sits in the middle of nowhere, not far from the bridge, near Vermilion Cliffs. TripAdvisor reviewers sang its praises so we stopped for a late lunch. HH got a Reuben but I got an appetizer of sauteed brie. This is an appetizer. This little hole-in-the-wall restaurant, where you'd be inclined not to stop, serves a plate like this. The chef makes his own tomato and kalamata olive tapenades. $12. 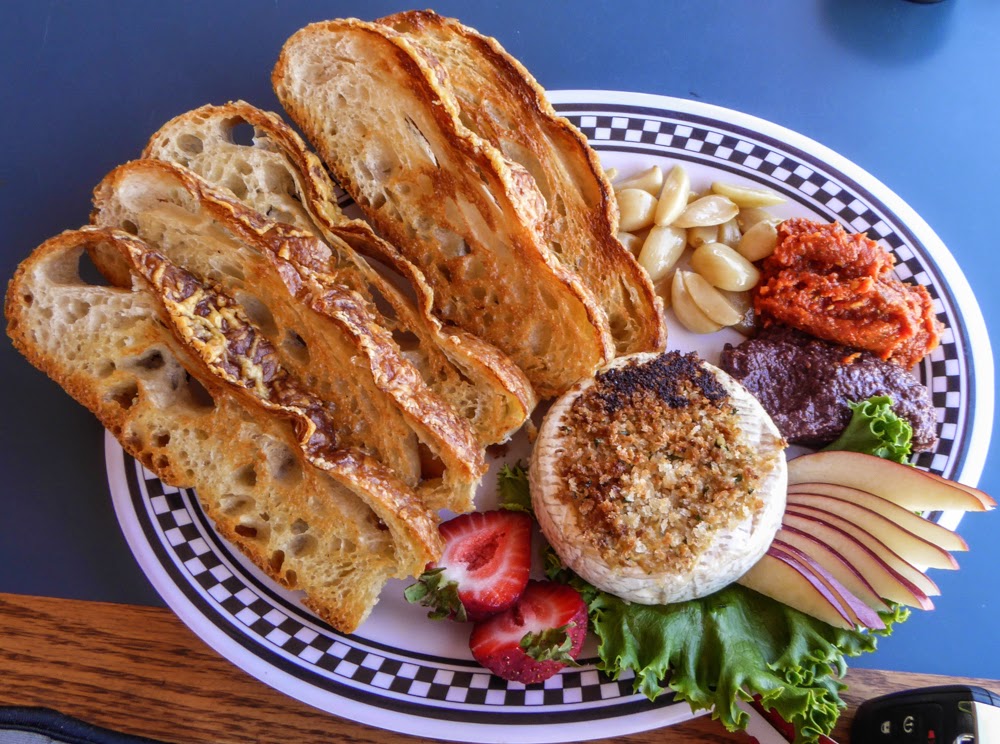 The sign that gives nothing away as to what awaits and that is the view we had. We sat outside despite the heat because they've installed misters and ceiling fans and it was very comfortable. The only thing detracting from the meal was a woman seated two tables away who used the f-bomb so creatively I was tempted to take notes. She made it work for nearly every part of speech: noun, verb, adjective, exclamation, adjective. I think the only one she missed was an adverb. What a piece of work. 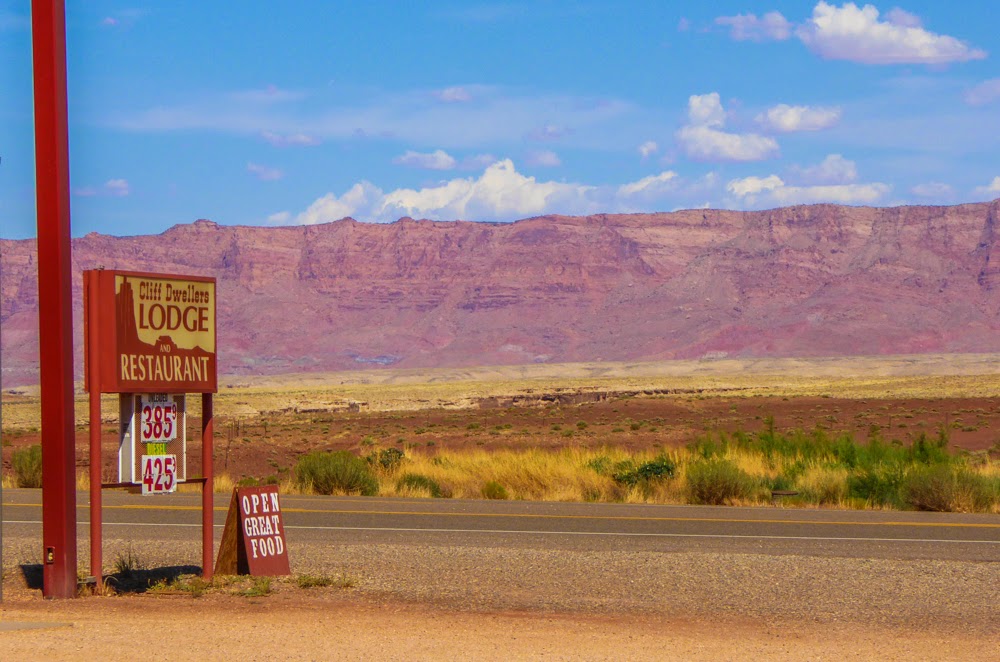 Then on back home so I could go to a yoga class one of the rangers is offering. I discovered that none of my joints bend and my muscles and tendons are so tight you could play notes from twanging on them. Other than that and the climb out of the canyon and the foul-mouthed floozy (I won't even go into how she was not dressed), it was a great day. No, I'm kidding. It was all a great day.

Night and day the river flows. If time is the mind of space, the River is the soul of the desert. Brave boatmen come, they go, they die, the voyage flows on forever. We are all canyoneers. We are all passengers on this little mossy ship, this delicate dory sailing round the sun that humans call the earth. Joy, shipmates, joy. — Edward Abbey, The Hidden Canyon — A River Journey
at 1:20 PM