New park, new work. Everywhere I go it's a little different and I'm grateful for that because I have a short attention span.

Before I came here, while I was still at Tumacácori in fact, I was told that I had to have a background check, complete with digital fingerprints recorded, before I could get an RV space assigned and have an ID card issued. This is the first time this has been required and I'm still stumped and somewhat ticked off by it.

The ID card is a smart card that allows access to the NPS network. And where did I have to go to complete the requirement? To Tucson, which was 30 minutes away? Oh, no. I had to go to Sierra Vista, Arizona, 90 minutes away, for a 15-minute appointment. I did this in mid-October and shortly after learned that I would have to go back to Sierra Vista to pick up the card. When I said, are you kidding me?, I was told the card would be sent to my park, meaning Death Valley. Going on three months later, I still don't have my card.

All of this whining is leading up to saying that what I was supposed to do here has changed because I don't have the card. The curator planned for me to finish cataloging a map collection, for which I needed to work on a laptop connected to the network. What he has me working on instead is purely paper-based work: processing a collection of abandoned mine lands records, more traditional archives work than I've done since I left my last paying job in 2010.

A little history: In 1933 President Hoover declared 2 million acres in southern California a National Monument. The push was on to make the area a National Park but because of the extensive mining going on, declaring it a park was a hard sell to Congress. Declaring the place a National Monument did put a temporary halt to prospecting and the filing of new claims, but under a prior agreement, the moratorium lasted for only four months and the monument was again opened to business as usual.

Over time, though, mining technology evolved, allowing large-scale, open pit and strip mining, some of it in highly popular, scenic areas. According to the Park's website, "Gone were the days of the 'single-blanket, jackass prospector' long associated with the romantic west." This eventually led to the Mining in the Parks Act, passed by Congress in 1976, which prohibited the filing of new mining claims, banned open-pit mining, and required the National Park Service to examine the validity of thousands of pre-1976 mining claims. This is where I come in.

This is collections storage, a locked area in the building where I work. Not only are the archives here, but also other collections, some of which I show farther down.  On the left below are boxes of documents; on the right are artifacts from the mines and settlements that were scattered throughout the valley and mountains. 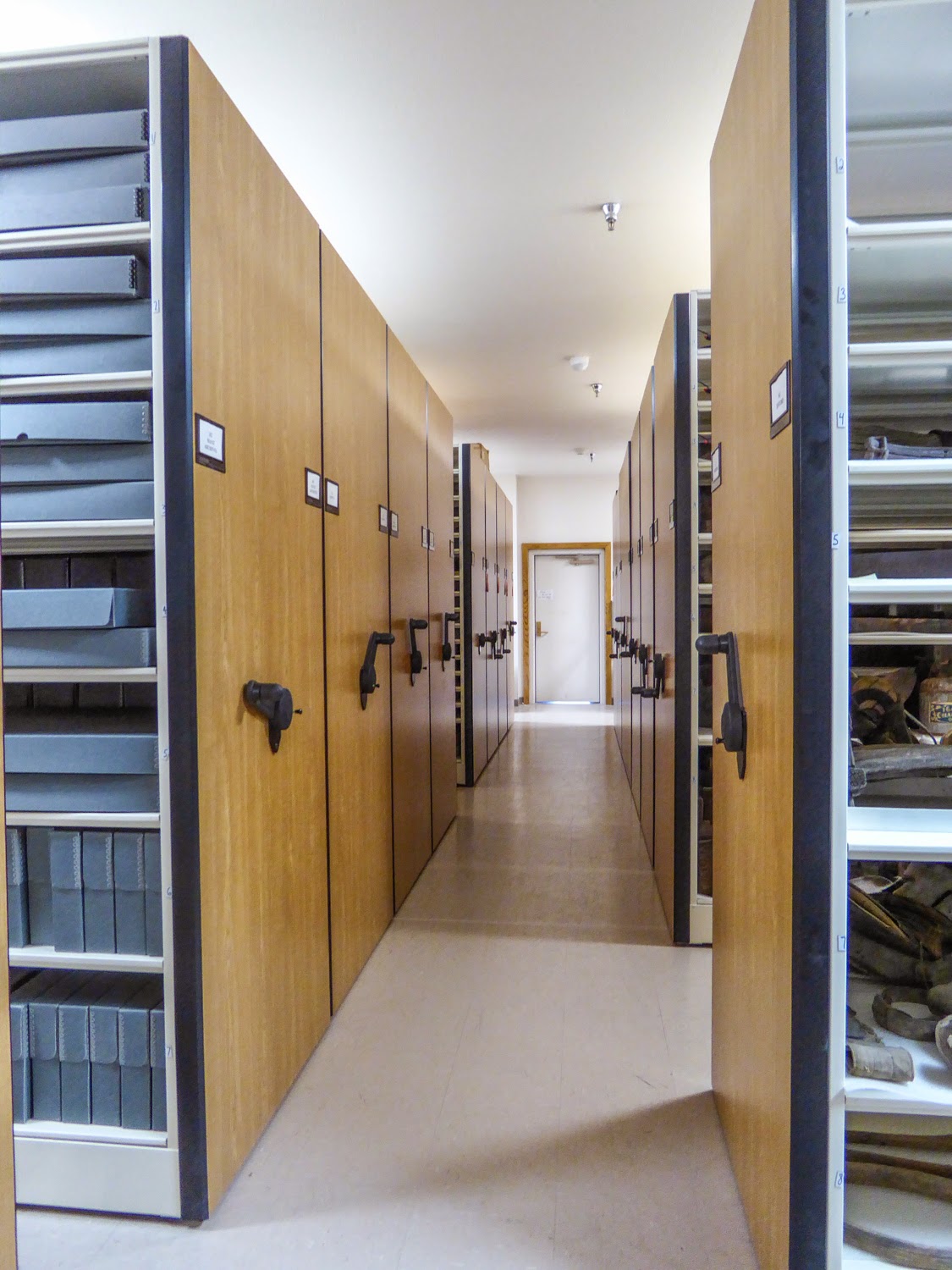 This is looking in the opposite direction. Artwork is stored on wire racks on the left. This area is a fairly recent addition to the archives because a fact of life is that collections grow and space is nearly always an issue. 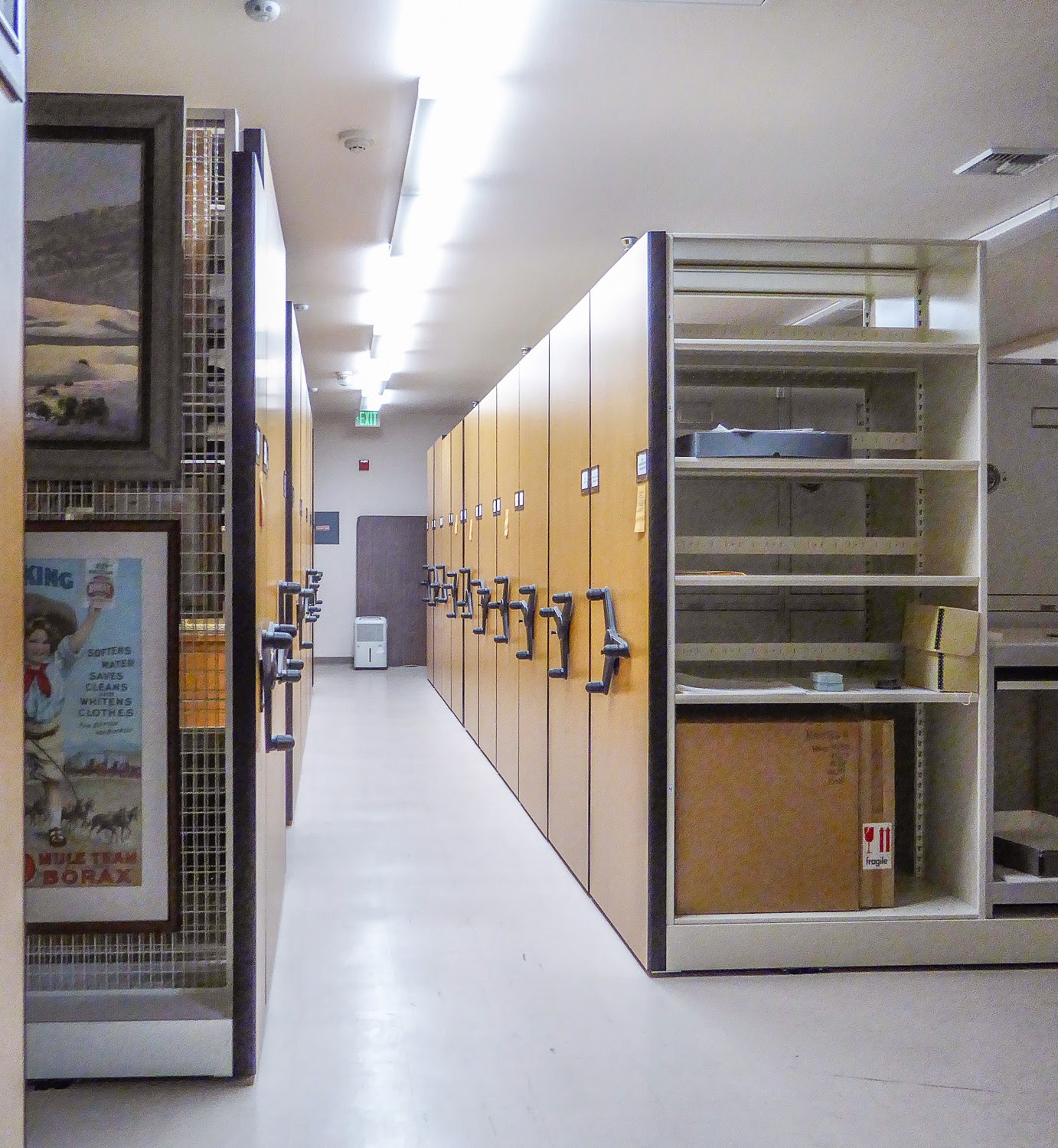 And here is what I do to pay the rent. The boxes below hold the abandoned mine records: litigation records, where the Park Service took claim holders to court to require them to prove that their claims actually had marketable material; acquisition records, where the Park Service started buying out properties to expand the size of the park; and records of monitoring mine sites to enforce the rules of road- and structure building, mine safety, and rehabilitation of the land after closures.

There was a lot of litigation. Right before the Mining in the Parks Act was passed in 1976, there was a flood of claim-staking and many people did it to have a weekend place, basically for free. Requiring everyone to prove the mineral wealth of their property resulted in the loss of their claims, but it took years and caused a lot of bad feelings, as can be imagined. Legitimate claim holders, many of them small mom and pop outfits, also had to go through the expensive process of acquiring expert opinions and legal representation. 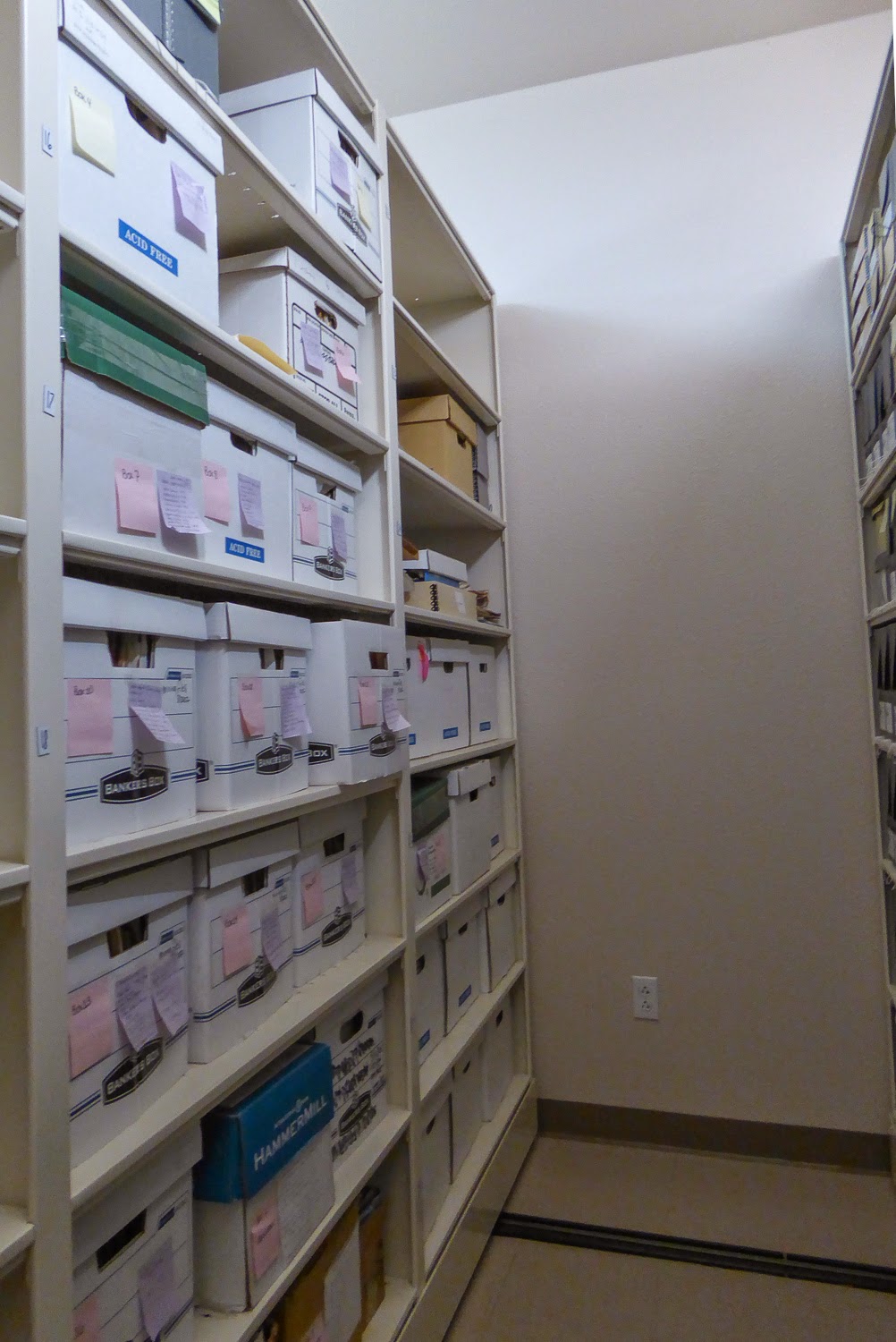 This is what I totally hate to see when I open a box. I do a lot of sighing.

My job is to go folder by folder, removing staples and other fasteners, copy whatever writing is on the old folders onto new acid-free ones, photocopy acid-y items onto acid-free paper, rehouse photos, etc. One day I worked my way through folder after folder where every document was two pages that had been stapled together. The next day I didn't have the strength in the hand that wielded the Special Archives Staple Remover to lift a folder out of a box. That was the day I became ambidextrous. Below is a box I'd half finished. It all sounds dead boring, doesn't it? Sometimes. But there's always something that redeems the boredom, somewhere in the box. 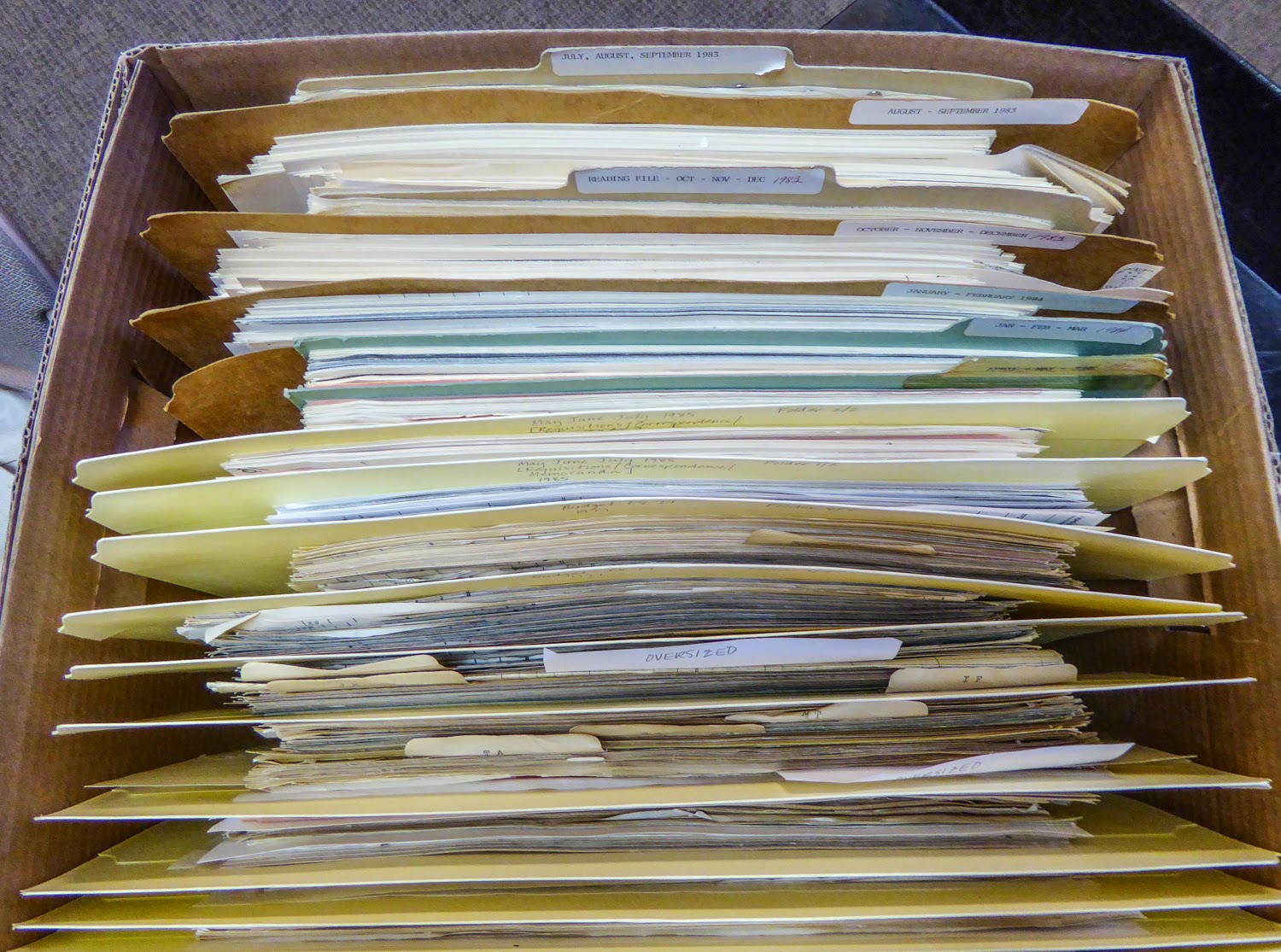 Plus, I'm making my way through lots of audio books at the same time I'm accumulating piles of debris. This is one day's take. 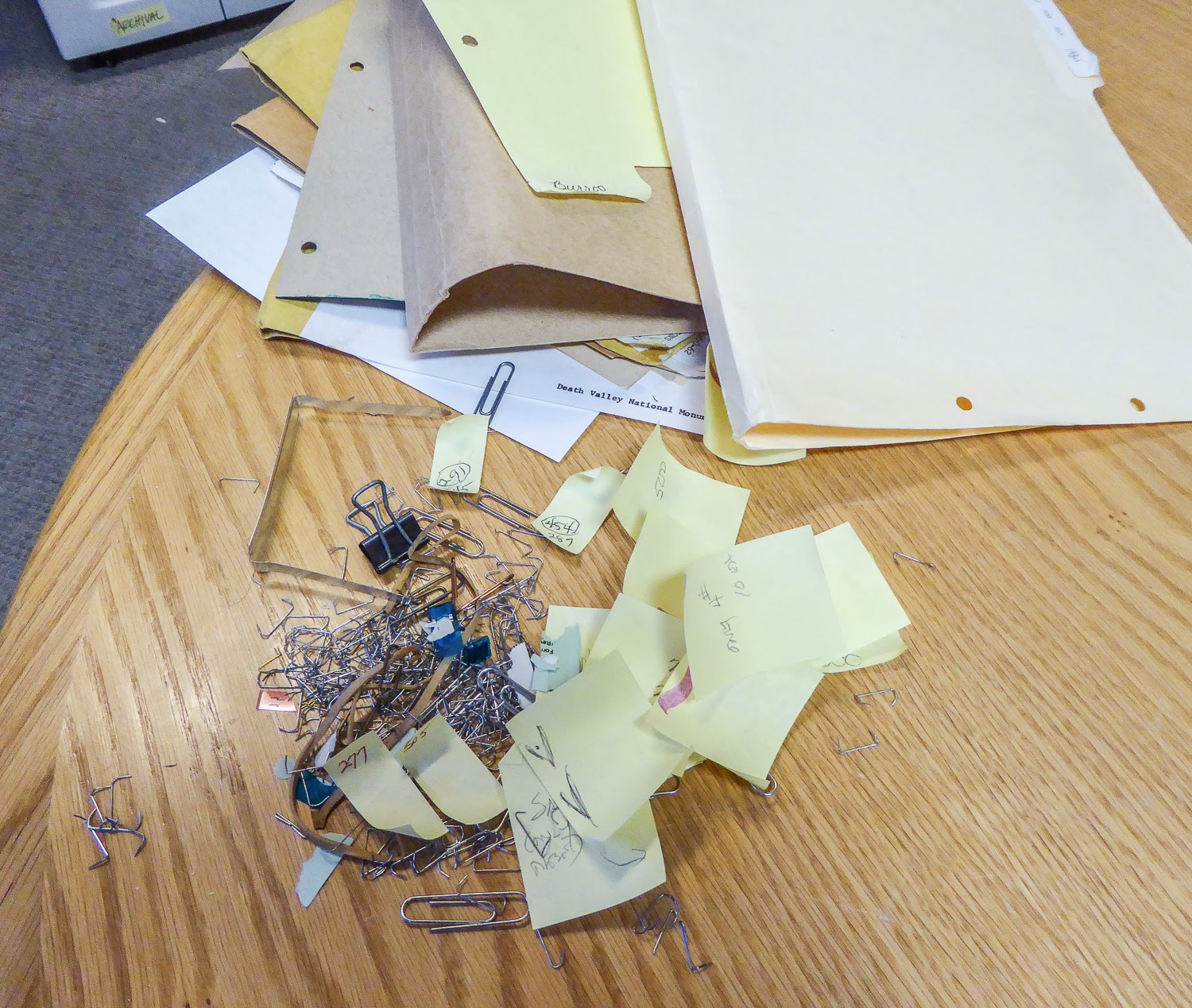 At some point, someone will go through the boxes again, using the notes I'm taking on the contents, and write a finding aid, an inventory, that will give the history and background of the collection and list the contents, folder by folder.

Here are some of the fun or interesting things that are in collections storage. 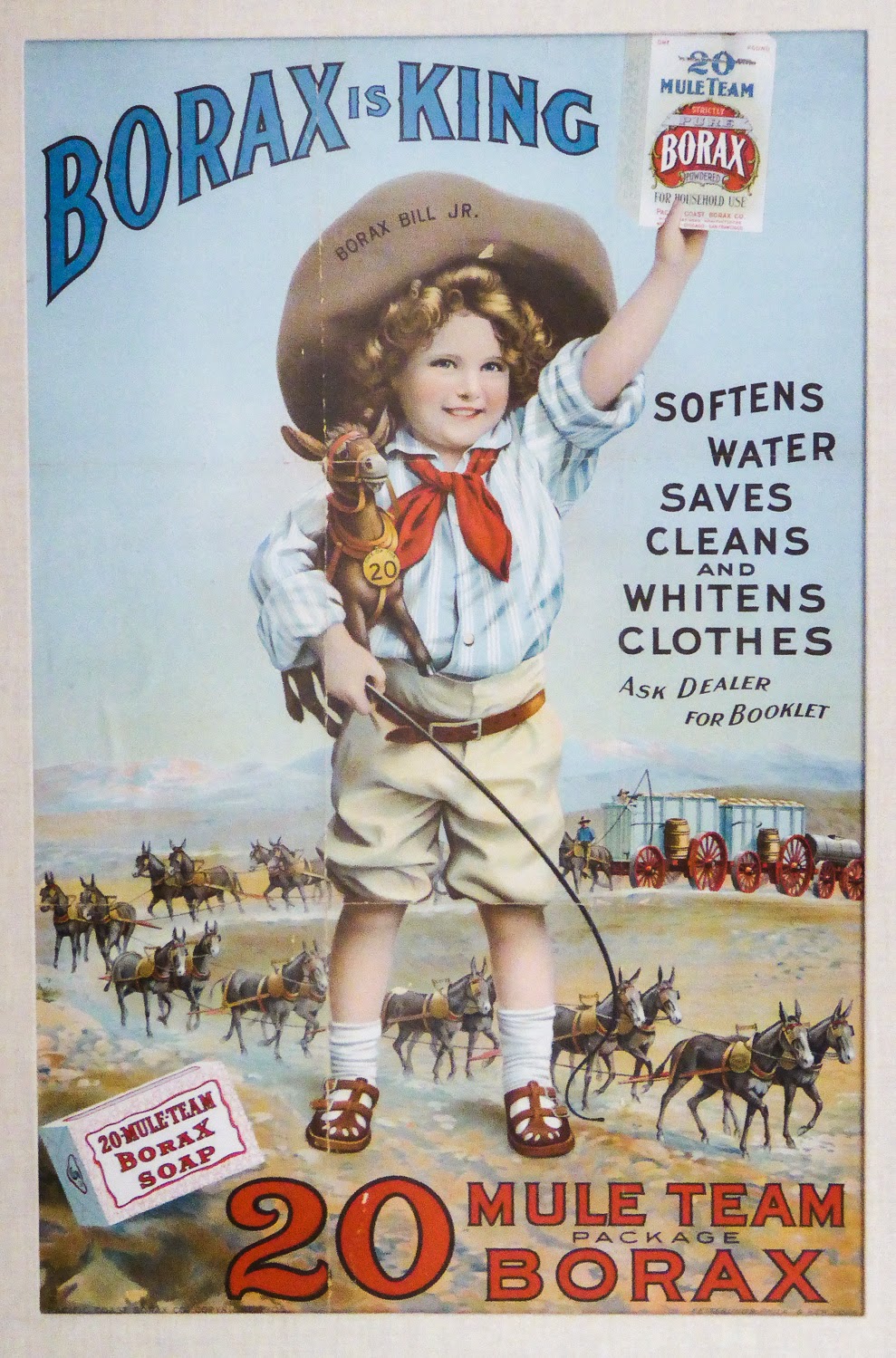 A basket from one of the early native peoples in the area. 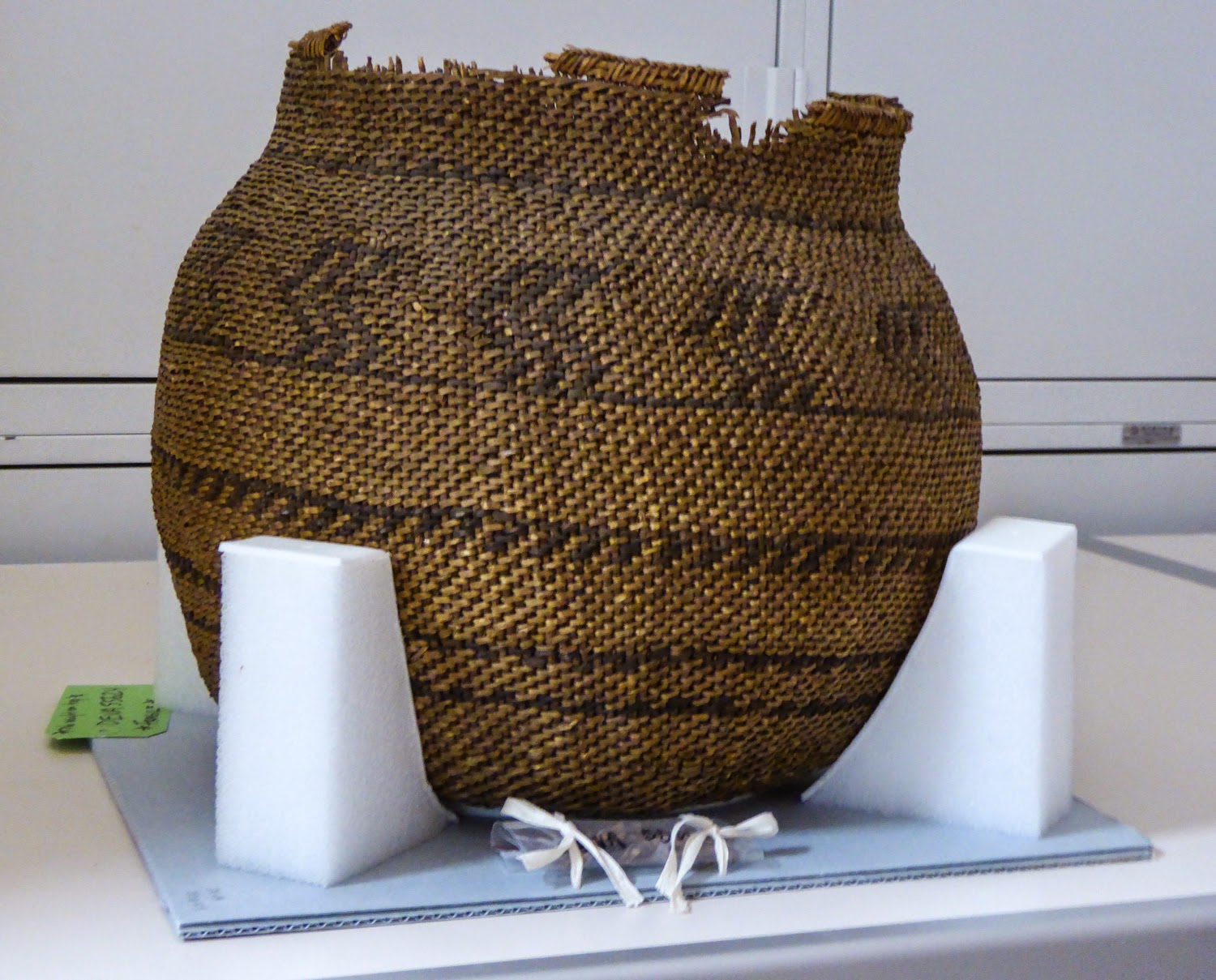 One of several models of a mule team pulling wagons loaded with borax. 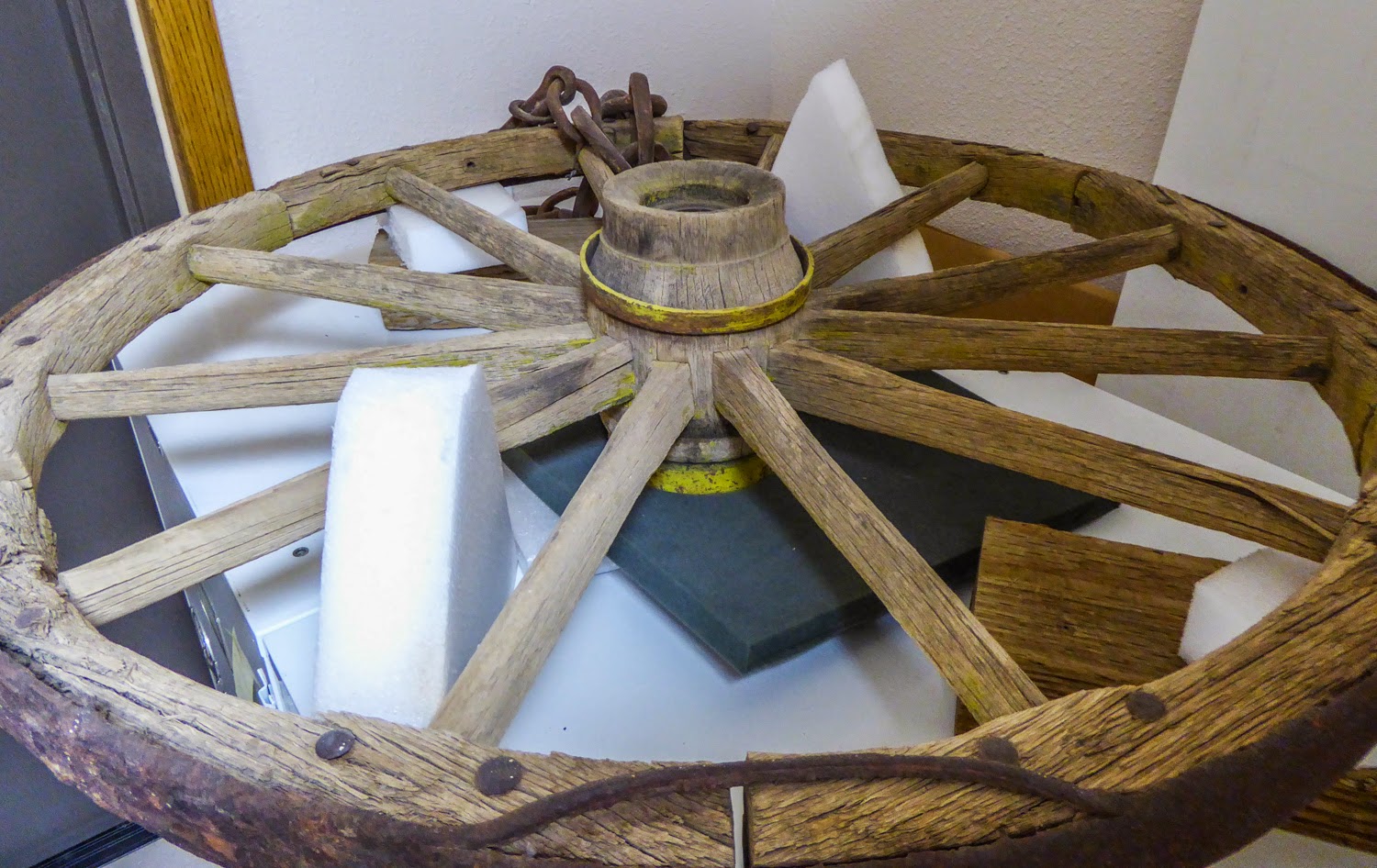 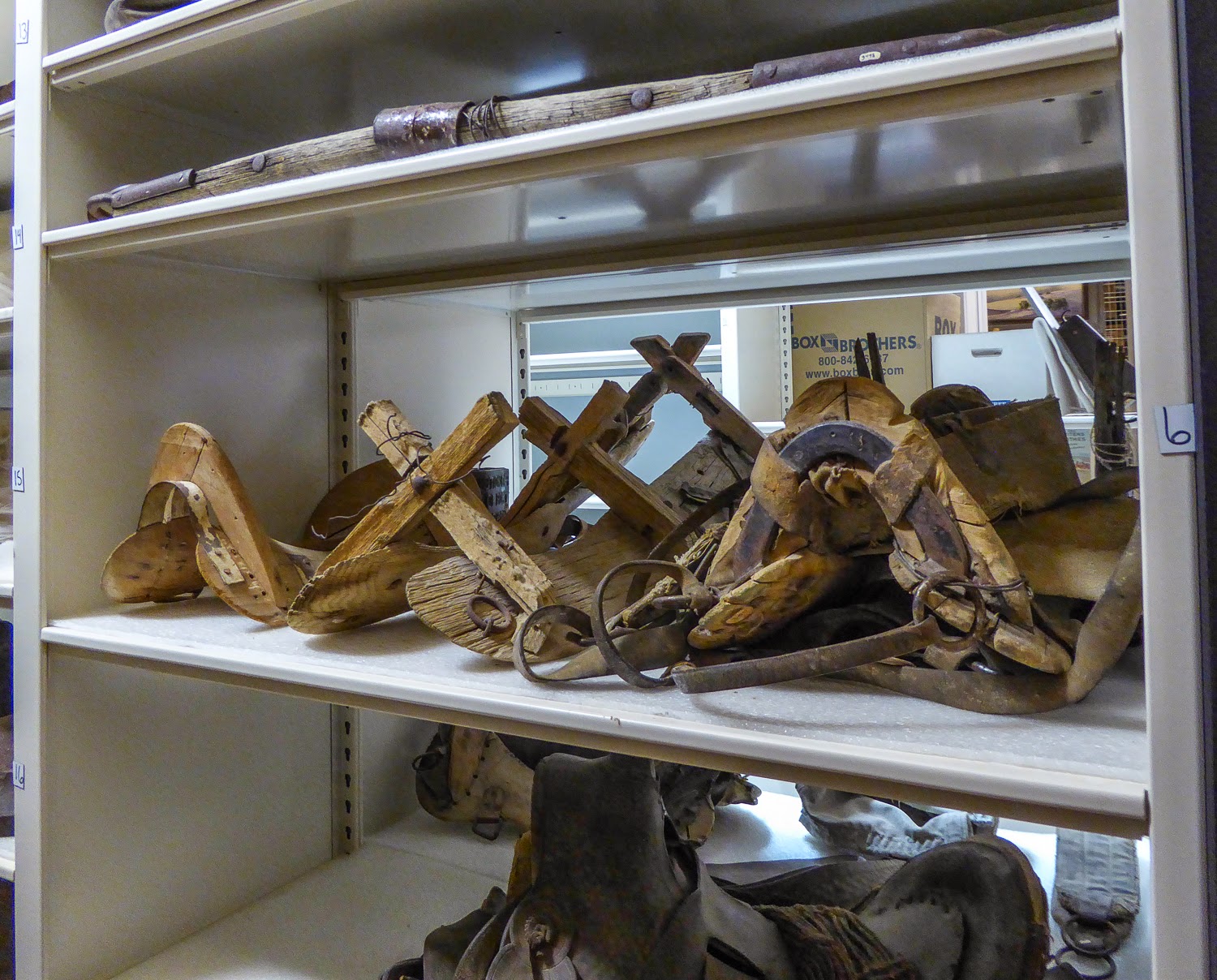 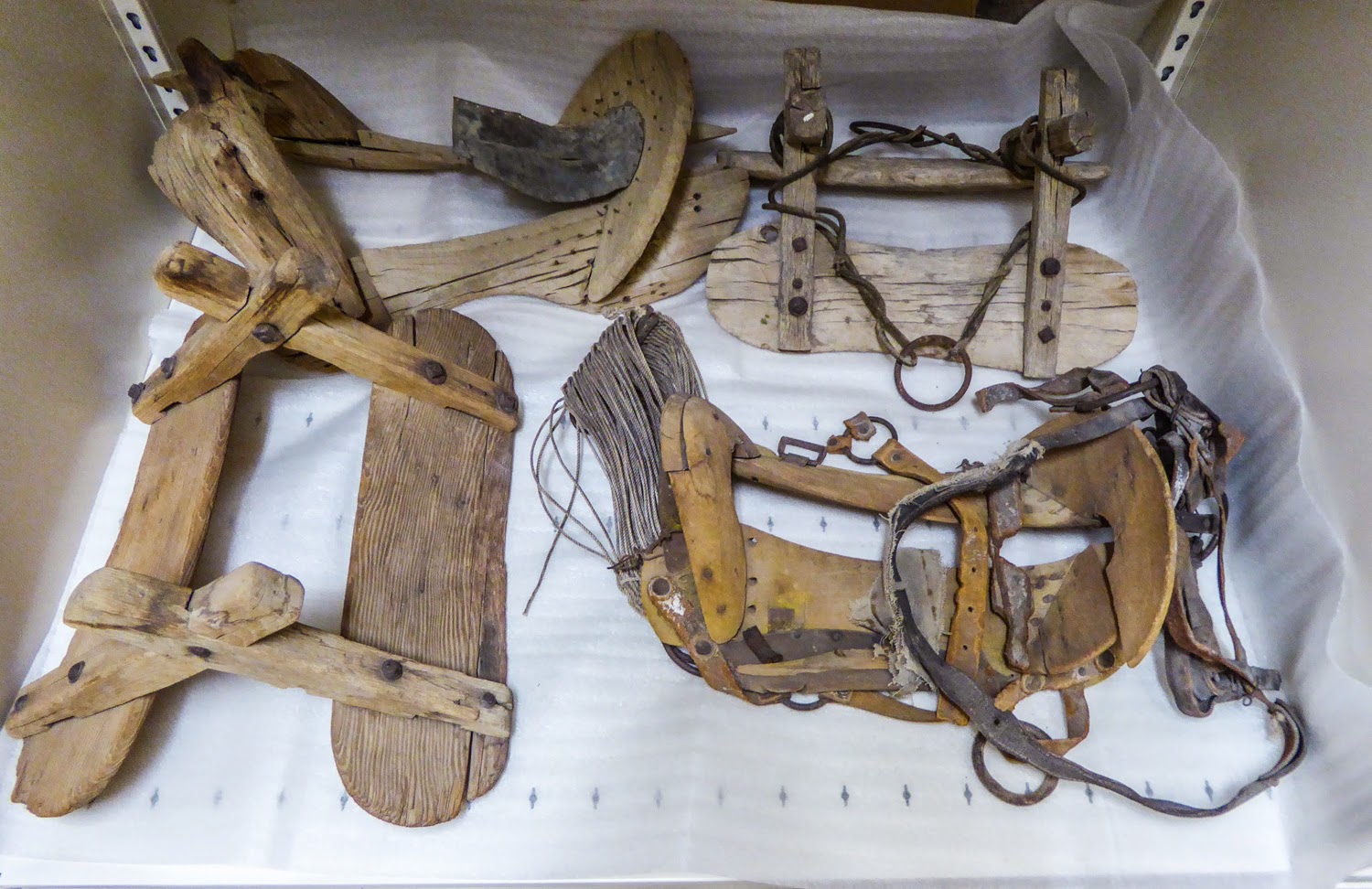 I don't know where this came from - a wagon? 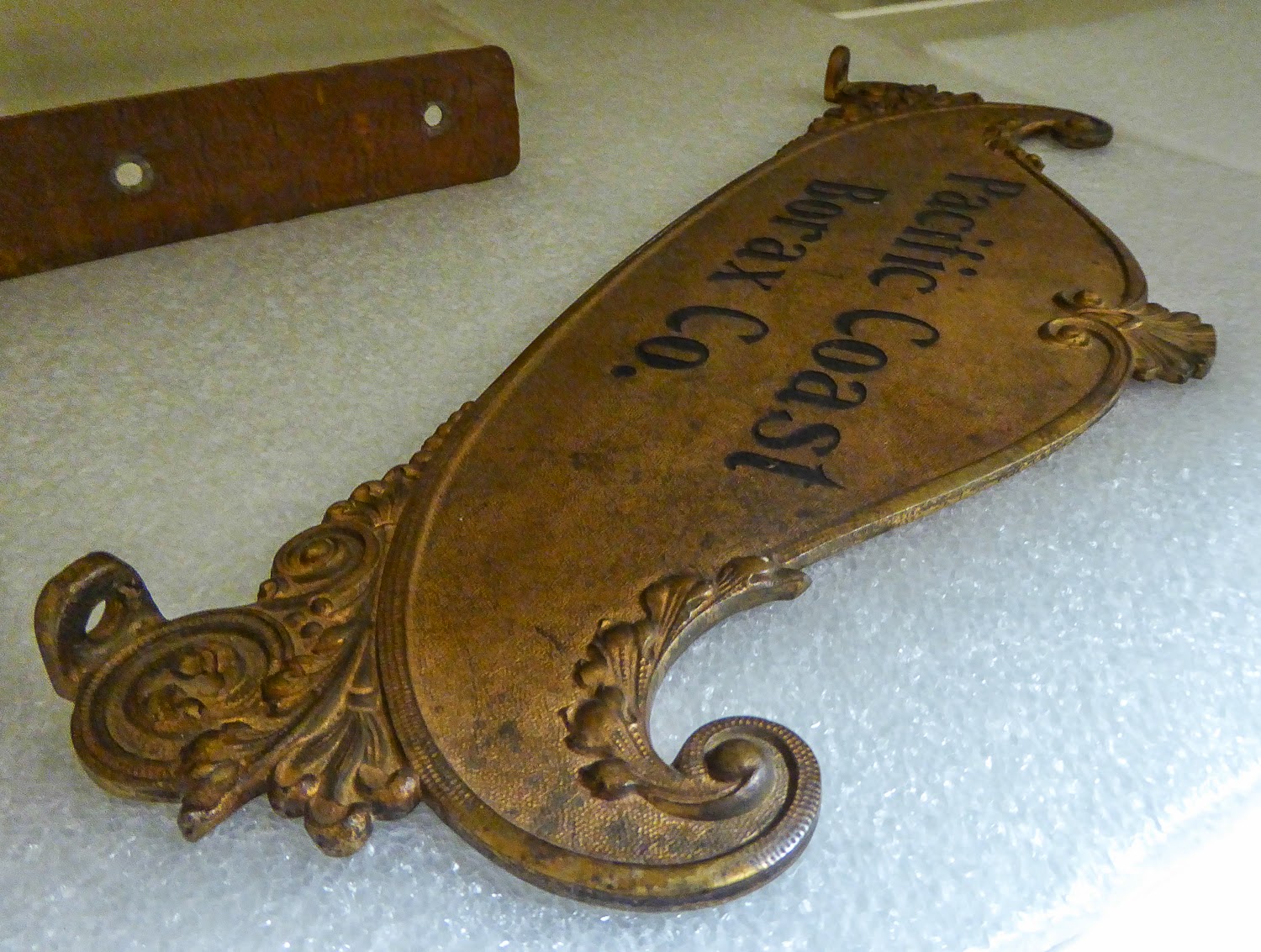 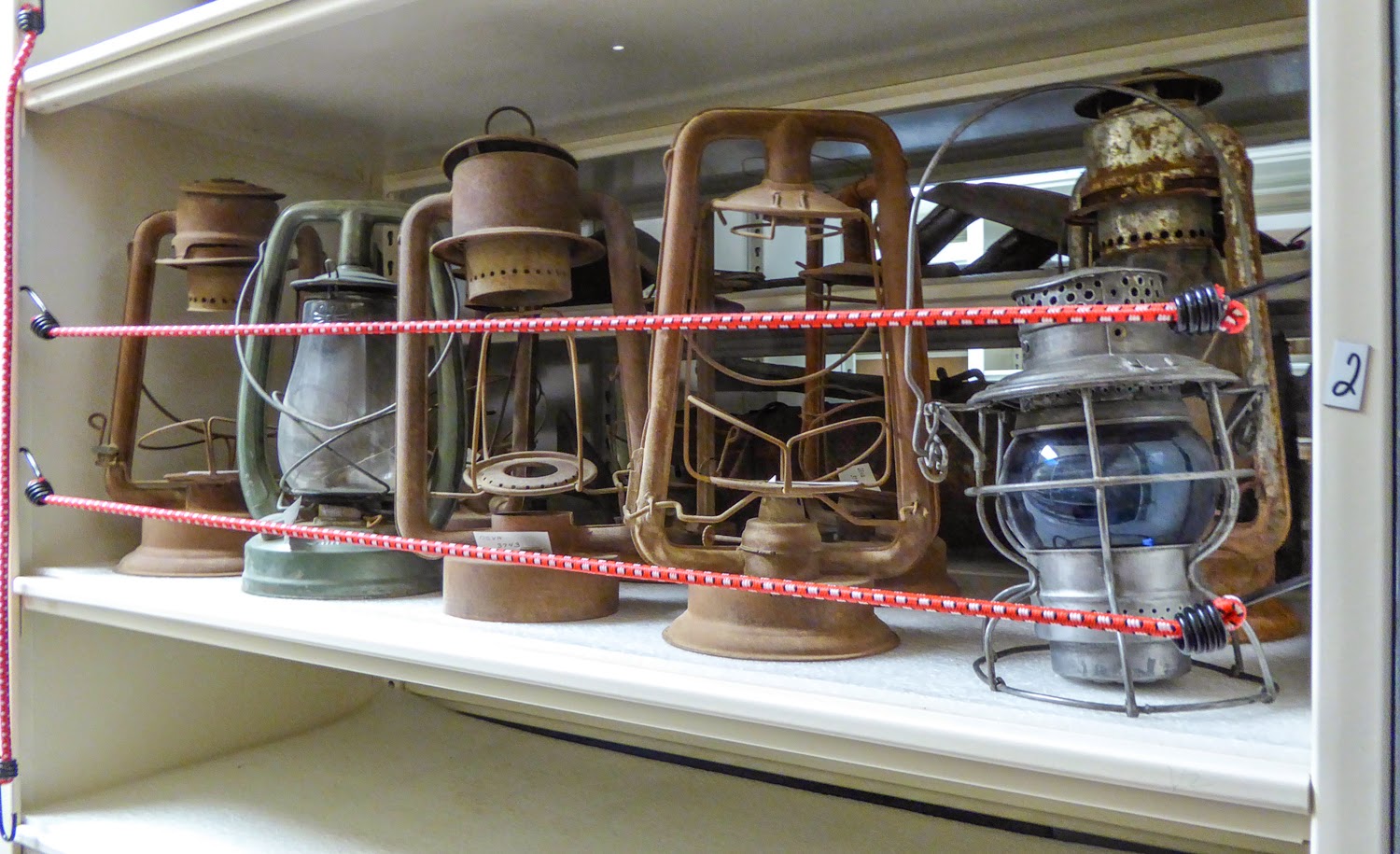 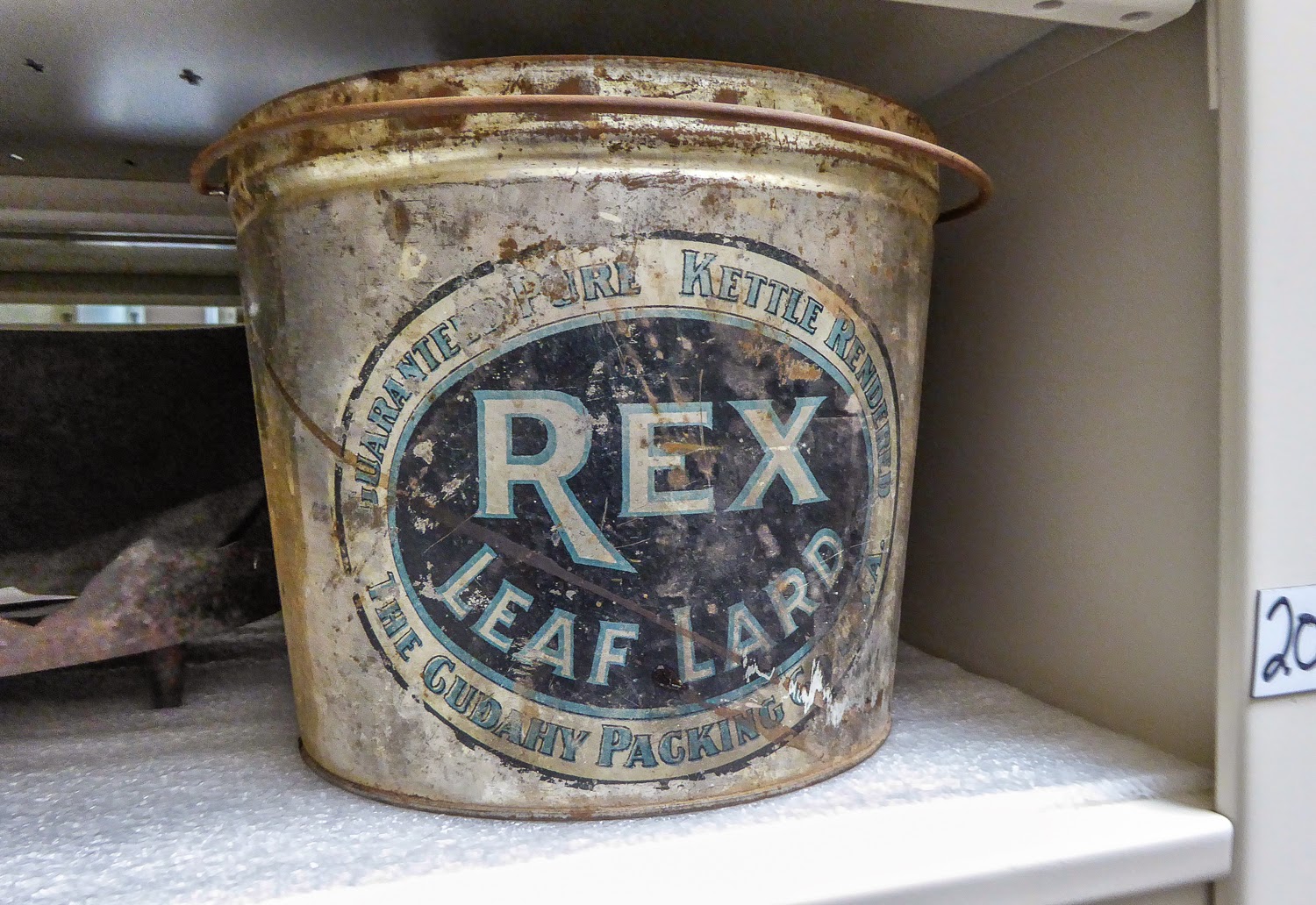 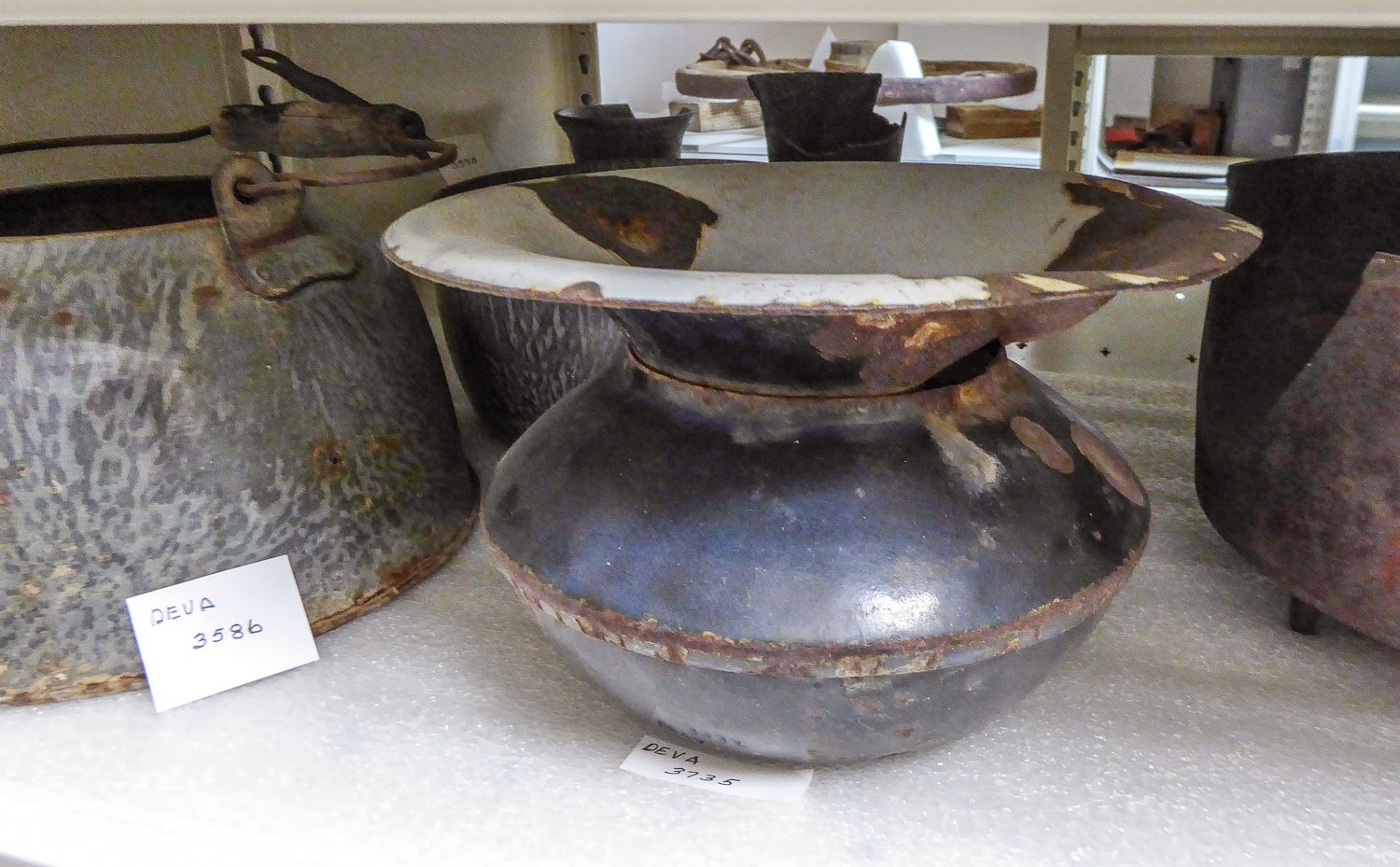 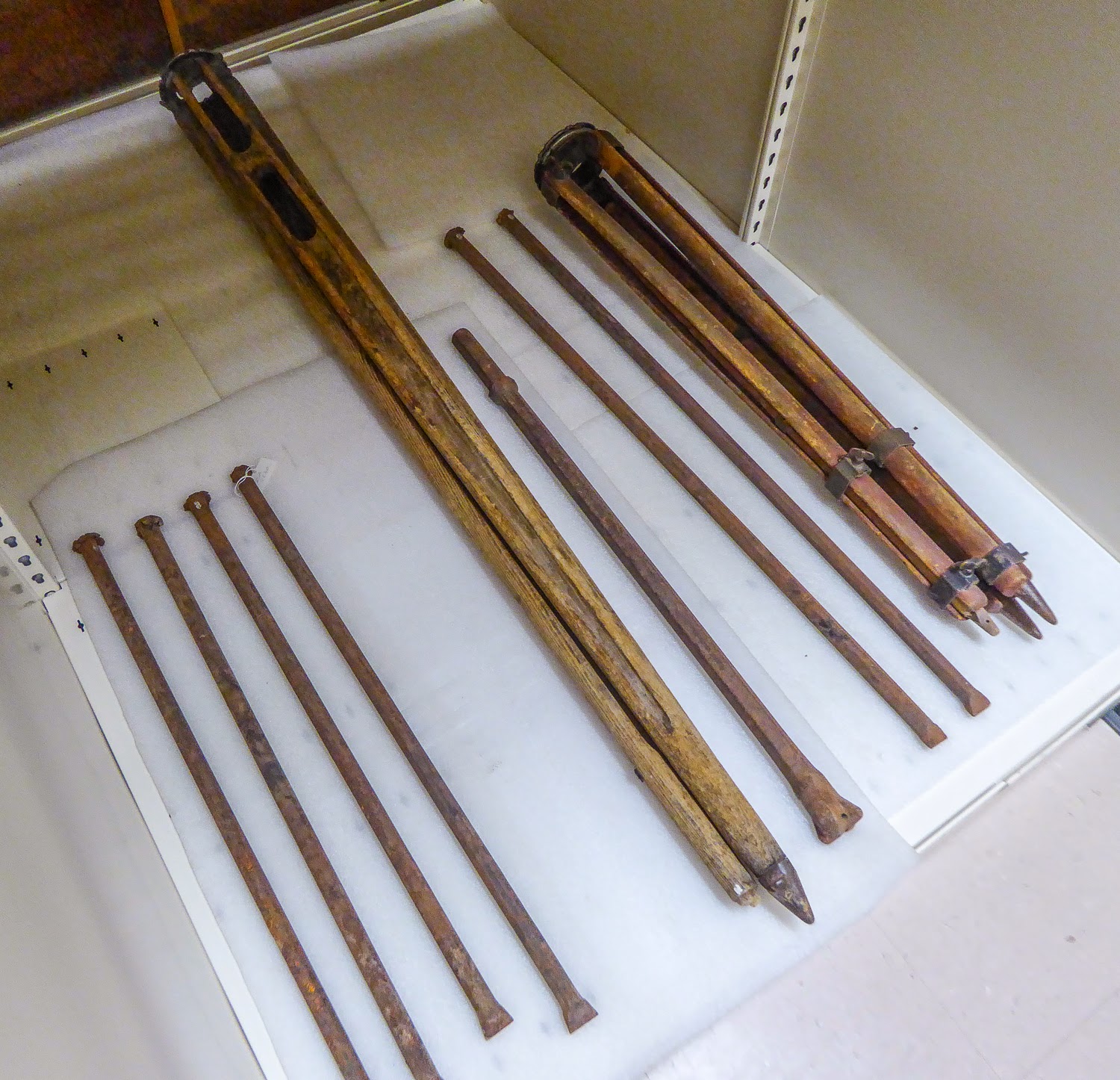 Death Valley's curator is also curator for Manzanar, the World War II Japanese internment site. These are items from Manzanar. 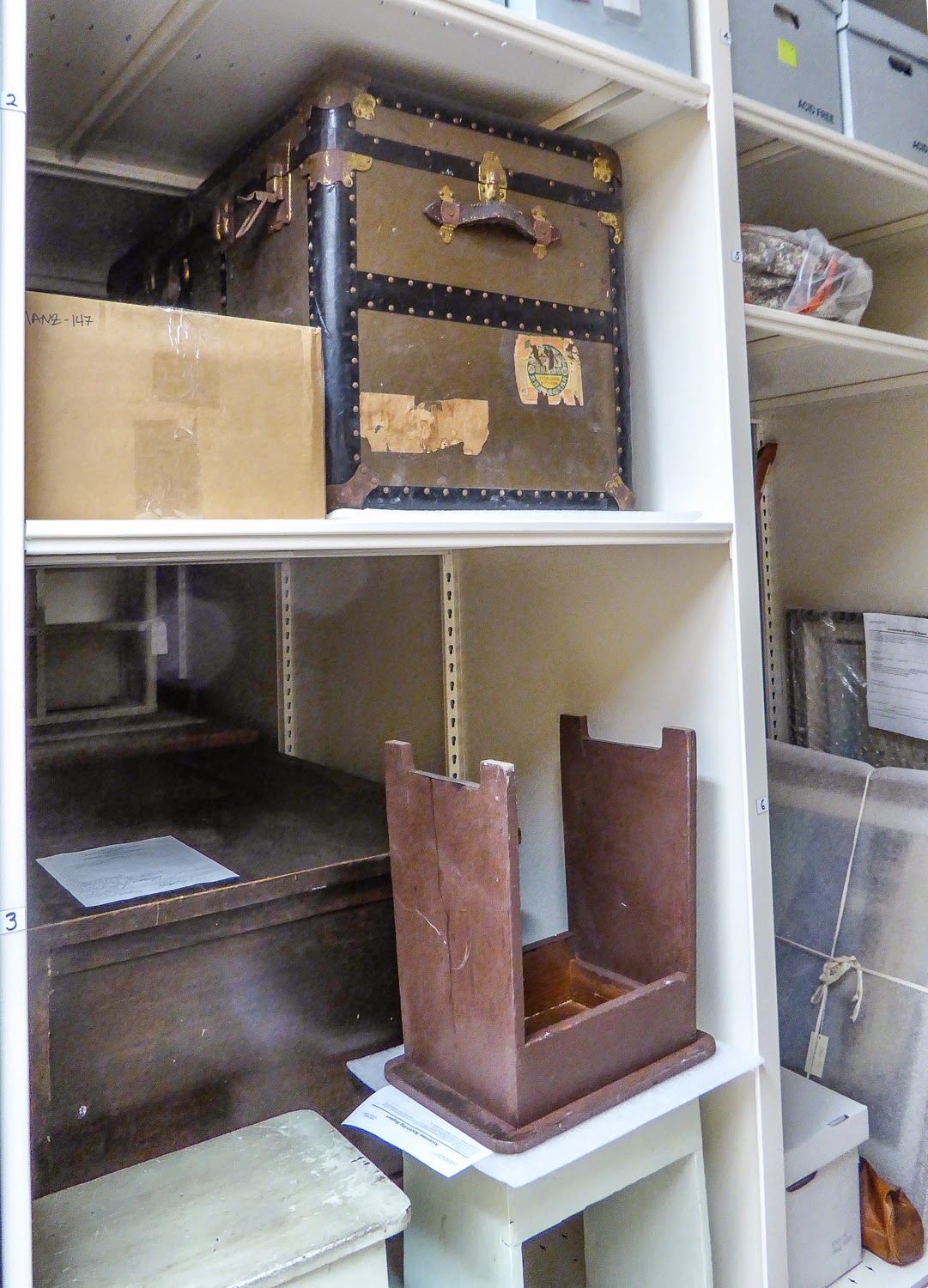 A tiny vanity, no more than a couple of feet high. 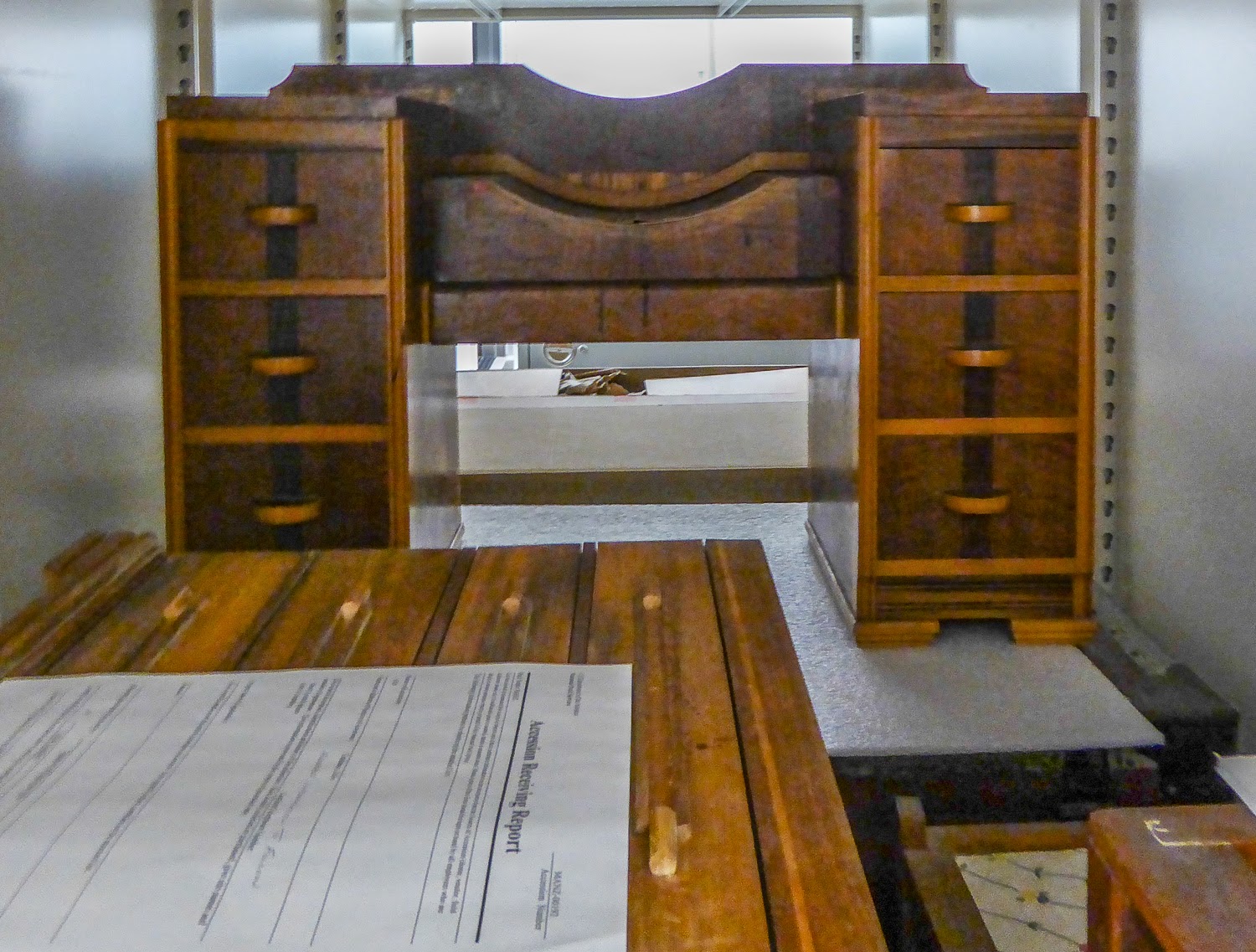 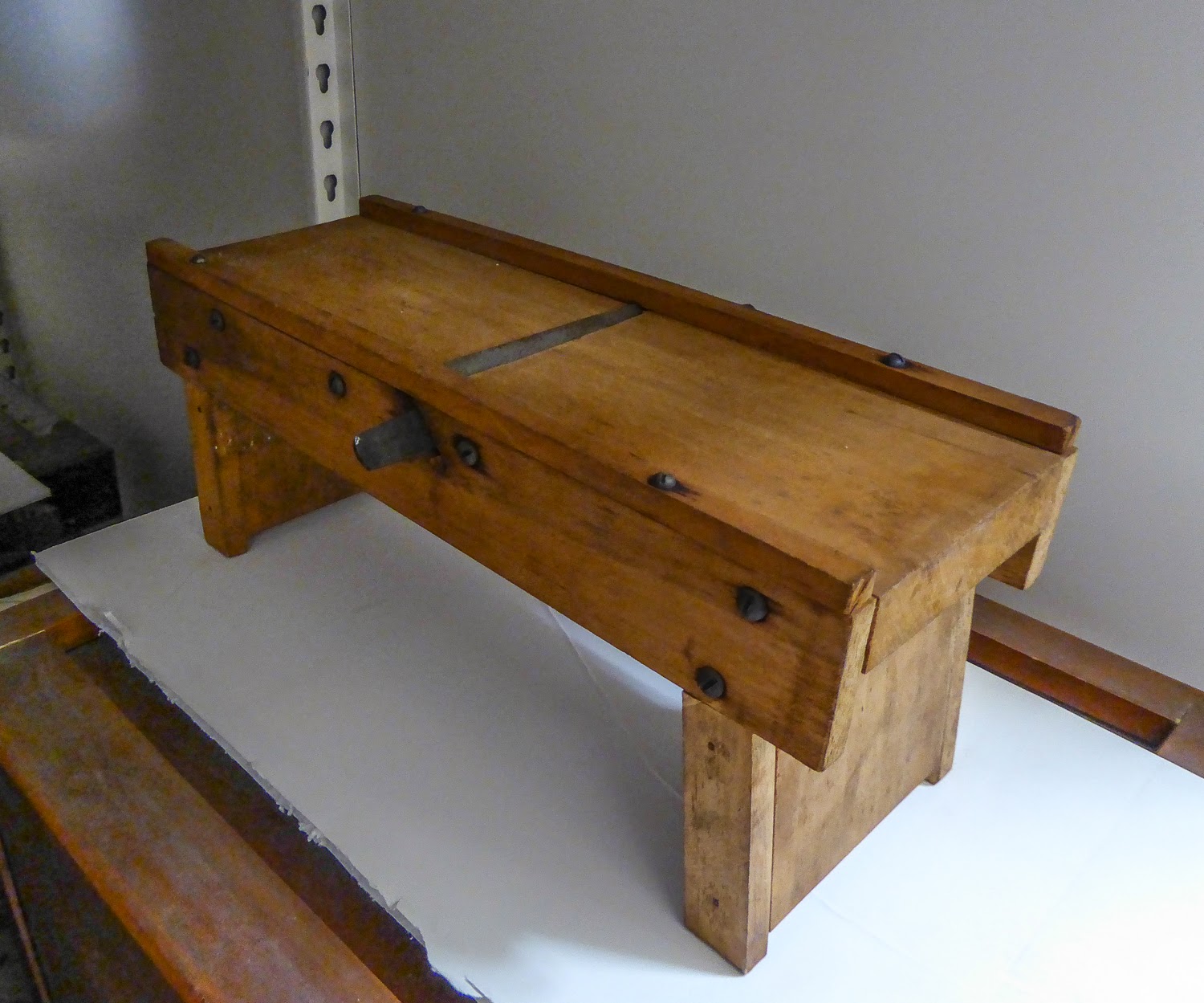 HH and I are planning a trip to Manzanar this weekend. Stay tuned.

It comes from a trial transcript about the value of the minerals of a particular mine. John, the witness, is a foreman and a lifetime miner.

Q. Do you of your own knowledge know whether any ore was shipped out of these claims?
A. I pulled that stuff out with a jackass and hand trammed that stuff out of there, 40, 45, 50 cars every day for all summer.
Q. John, I realize that you some times use colorful language, but we are in a court of law.
A. Burro or jackass. If it's a bad name, they better get them out of the Park.

The same witness was asked about the yield.
Q. What type of trucks did they have, John?
A. Gee, mainly Kenworth diesel.
Q. And how big a load could they carry out?
A. How much tonnage?
Q. Yes.
A. You would be surprised if you weigh one there. I think about 90 percent of them get a ticket.
Q. What would an average load be, John, while you were mining the talc?
A. Well, legally carry 25 ton I am pretty sure.