Art? or vandalism? at Mirror Lake

When HH's son David was here last week he drove us around to places we hadn't yet been. David had been here before, for a shorter time than we've been, but saw much more. I have to say that because we don't live in the park and it takes at least a half-hour to get inside and to the Valley, we don't go all that often. It's just like living anywhere: I lived in northern Virginia, right outside Washington DC, for ten years and while I went a lot of places there were just as many I never saw. There, as here, it was a matter of horrendous traffic, lack of parking, and the idea that I had plenty of time that kept me from those places. It's an easy trap to fall into, especially the "plenty of time" idea.

So David played tour guide and nowhere he took us was a disappointment. One such place was Mirror Lake, which we had to get to early in the season before the water disappears and it becomes Mirror Meadow. It was much less crowded than I expected it to be, always a pleasant surprise.

It's a beautiful setting and the weather cooperated with little wind to disturb the lake. This is the view, the only perspective that provides the perfect reflection. 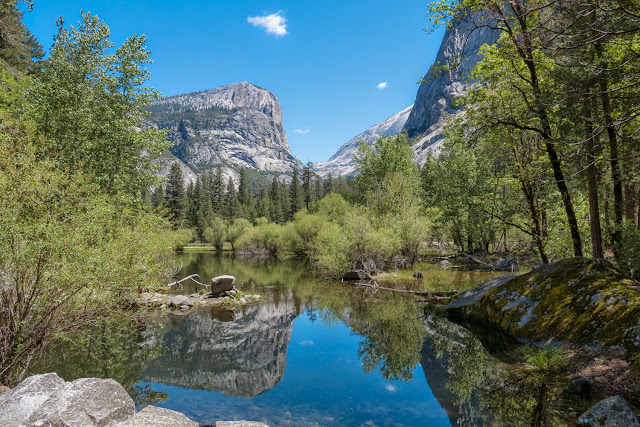 Across the trail from the lake is a hill of boulders, and peeking over the top is a cairn forest, like fairy monuments. The Park Service does not encourage them and will usually actively remove them from the landscape. I don't know why it hasn't been done here. While at Death Valley, my friend Deb saw a huge one built near a canyon. It was newly built and she remarked that it must have taken the builders all day to erect. She reported it and was given the go-ahead to break it down. We also saw some while hiking in canyons that supposedly helpful former hikers put up to direct the way to go on trailless hikes. I always wondered about the helpfulness, though, because who's to say what the cairn is really pointing to - maybe not the trail we were necessarily looking for, or even put there by someone deliberately trying to misdirect.

There are legitimate cairns, those that mark old mining claims or are Native American-built for various reasons, dating back to prehistoric time, so not every one should be destroyed. While discouraging their use, the Park Service also wants to be notified about them to determine if they're legitimate. That's why Deb reported the one she found, even though she knew it was brand new and had no business being there.

Death Valley has a Facebook post about what they call the Monkey See, Monkey Do activity of cairn building. Cairns are like written graffiti in that once one has marked the landscape, it becomes viral. I always thought that if my car had some body damage it should be repaired because the damage seemed to encourage further door dings or bumper scrapes. There's something about human nature that makes us want to join in or one-up someone else.

Last week I was able to go on a one-hour tour of the Valley, narrated by an Interpretation Ranger who is really good at his job. He started the tour by explaining the significance of the National Park Service badge. 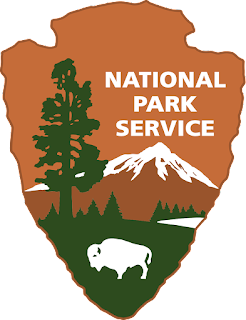 The Service's mission is three-fold (I'm paraphrasing based on my memory of his narrative): to protect the nation's natural resources, as noted by the solitary tree, the forest, and the bison; to protect our cultural heritage, as represented by the arrowhead, and to provide for the enjoyment and recreation of visitors, as portrayed by the lake and mountain. It's a delicate balancing act. The more time I spend in our national parks, the more I understand and appreciate the difficulty of the job. People love their parks, and the parks are often loved to death.

A couple of weeks ago I attended a talk given by one of the people on the wilderness crew who illustrated the work that's been done to reclaim meadows that have had trails worn into them over the years. He explained their job is not to restore the meadows to their original condition, but to restore their functionality. Meadows, when they haven't been trampled to concrete, act as sponges for snowmelt from the mountains. They're basins, collecting water and holding it there until it seeps into the water table. When trails have been worn into the meadows, in some cases as much as knee-deep, their functionality as reservoirs is disrupted because water now runs off, not only not having time to percolate into the soil, but causing damaging erosion that further contributes to the problem. The differences in the before and after photos could be seen as miraculous if he hadn't shown that the crew's work is time-consuming and back-breaking, in many cases digging and hauling all by hand.

This is a round-about path that leads back to the cairns that follow. The issue is polarizing, with the Leave No Trace people staunchly on one side, and the What Harm Is There people firmly on the other. I understand both sides, having found that position the best one to take for sanity.

So here's this fairyland of piled rocks. Some are astonishing feats of engineering. All are unauthorized. Somehow, as much of a rule-follower as I've always been, I'm lightening up in my old age and, on this issue, couldn't find anything to complain about. For one thing, they're confined to this one, small area. People were recreating with minimal impact. This isn't a wilderness area. There was a respectful, almost reverential hush about it. People walked gingerly among them. To me, the area was enchanting and charming.

Take a look at them and see what you think. Are they art, or are they a form of vandalism? 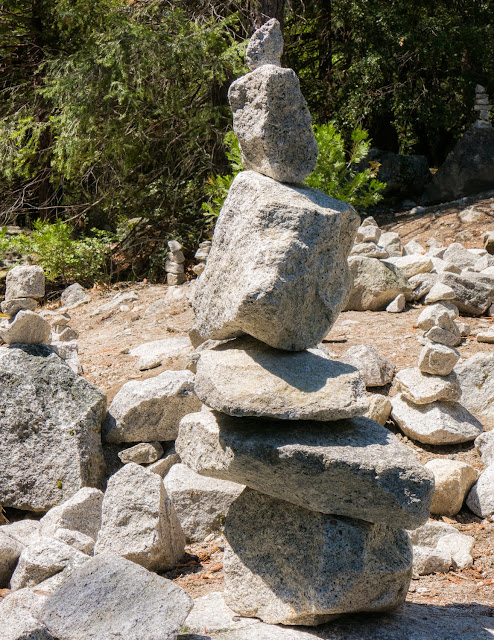 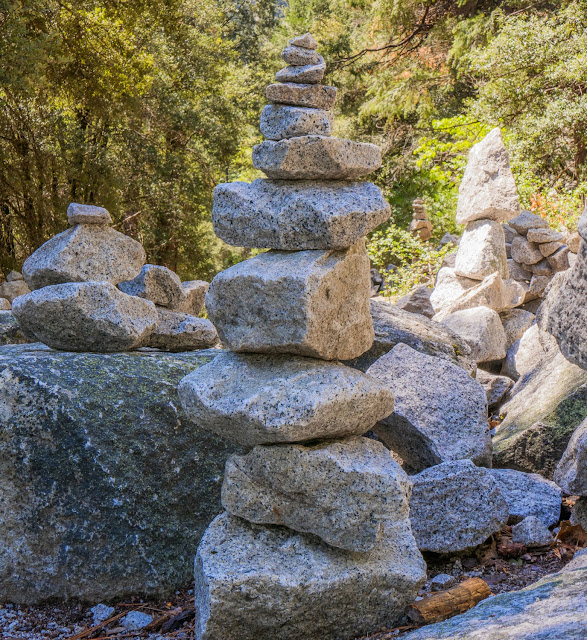 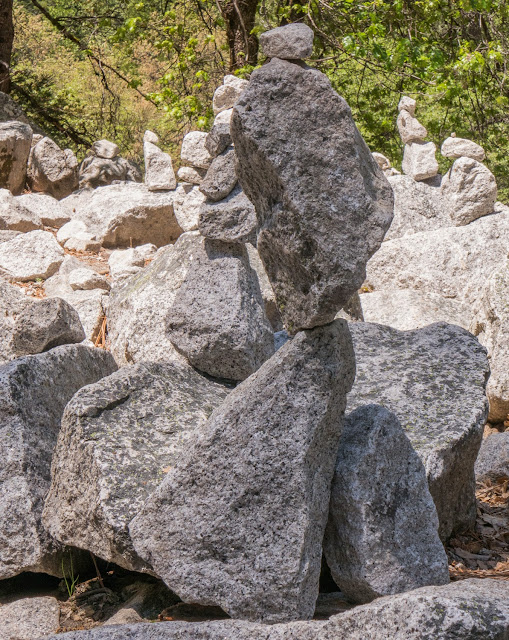 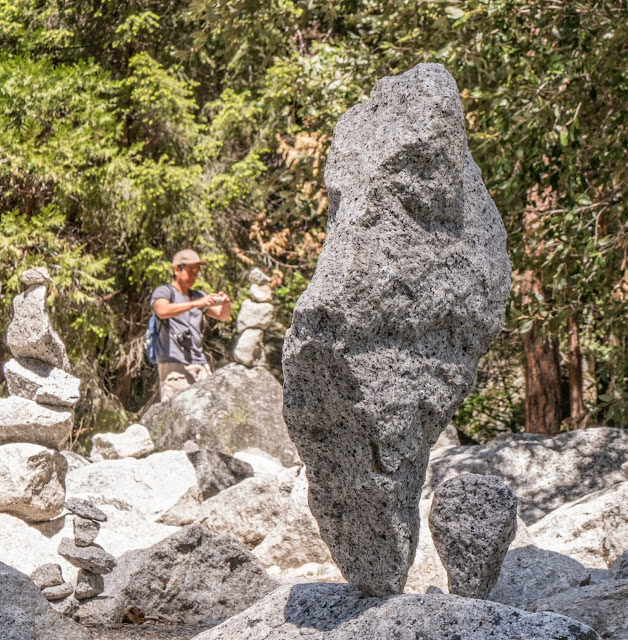 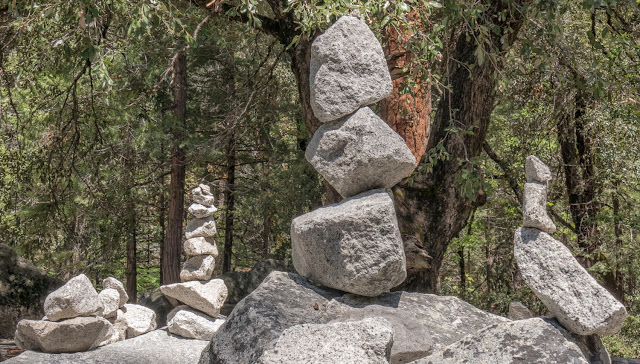 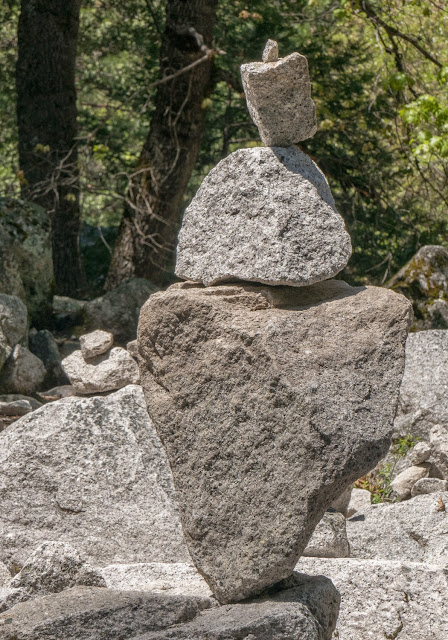 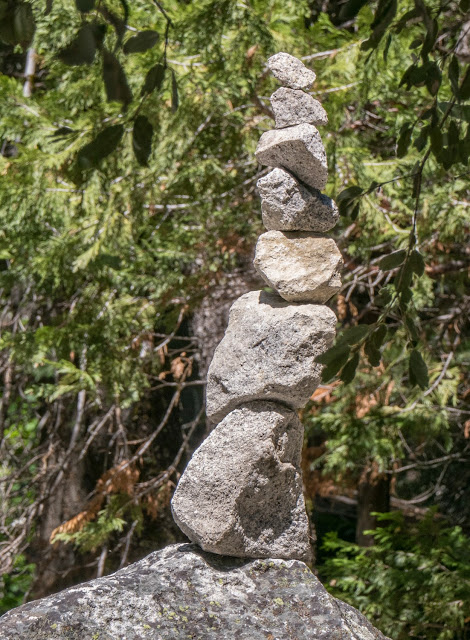 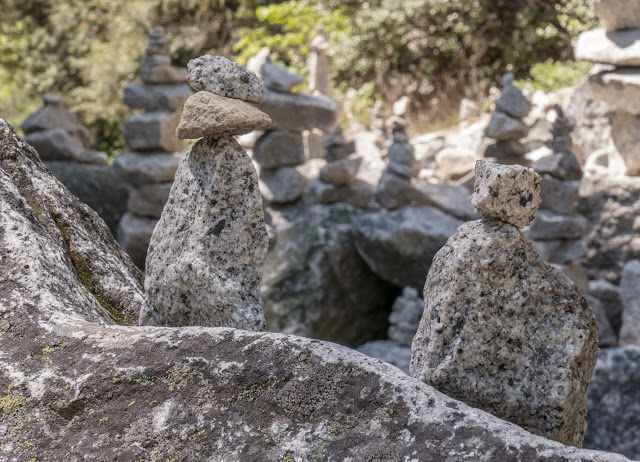 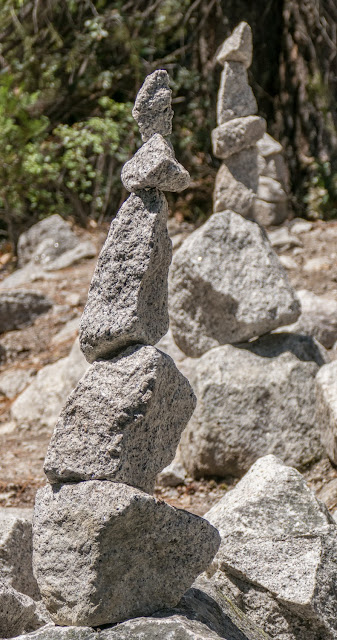 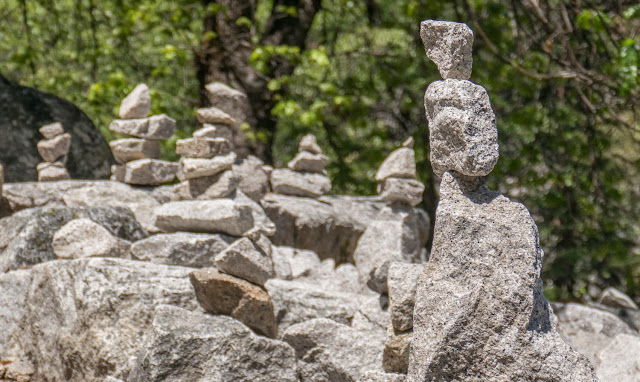 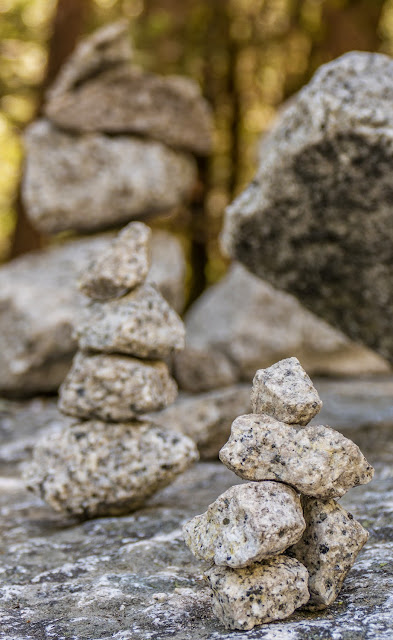 What do you think?

A last look at the Mirror Lake area is of the river that still flows, but not for long. Soon it will all be dry here - but the cairn builders will still come. 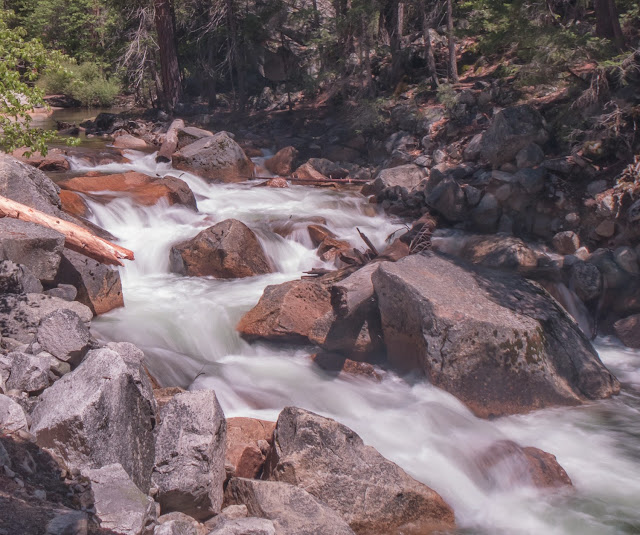