Tioga Pass and beyond

We were in the mood for a road trip a week ago and decided to tackle Tioga Road and, consequently, Tioga Pass, last weekend. The idea was to go over to Mono Lake, turn around and come back, but it didn't work out that way, and aren't we lucky that it didn't.

First stop was Olmsted Point, named for Frederick Law Olmsted and his son, Frederick, Jr., when Tioga Road opened to car traffic in 1961. I'm kind of fascinated with Olmsted and when I saw the point on the map, I knew I had to see it.

It can be said that Olmsted was a late bloomer, or to paraphrase Edison, he tried several ways to make a living that weren't going to work for him - among others, as a seaman, merchant, and farmer. He was more successful as a journalist: he traveled in England to visit and write about public gardens, and to the American South in the pre-Civil War years writing about his conclusions on economic and social conditions resulting from the institution of slavery.

Along with his journalistic and Sanitary Commission work, he sidled into the competition to design New York's Central Park with architect Calvert Vaux. As Wikipedia subtly understates it, until then "Olmsted had never actually designed and executed a landscape design." They won, and between the two of them, the term and the profession of "landscape architect" was born.

Olmsted and his son, the Jr. mentioned above, who continued the tradition, ultimately designed hundreds of public parks and academic campuses from sea to shining sea. Olmsted's vision was founded on the principle of open access, of egalitarian design, of public spaces belonging, shockingly enough, to the public. In 1863 he came west to become manager of a mining estate in the Sierra Nevada, and that was his introduction to Yosemite. He ultimately was chair of the first commission to manage Yosemite Valley and the Mariposa Grove of Giant Sequoias, and wrote a report recommending a policy for the care and protection of the park's scenery and wildlife. An excellent biography of Olmsted is Genius of place: the life of Frederick Law Olmsted, by Justin Martin.

So that was a long wind up to the few photos I have from Olmsted Point. Here they are.

There's nothing spectacular about this except the mystery of bare scrapes of rock that somehow support life. 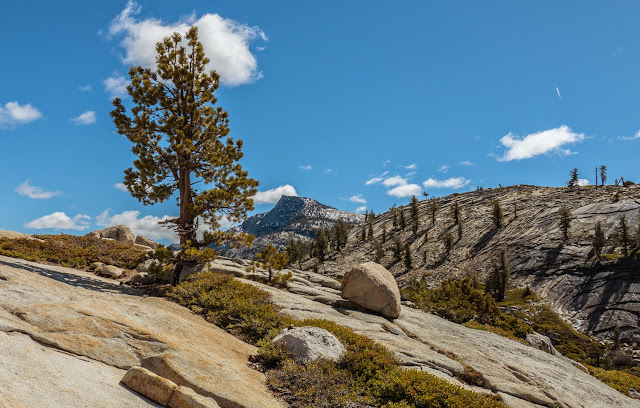 Abundant glaciated rocks, identifiable by their rounded edges - as opposed to sharp-edged rock-fall rocks - look like a giant has scattered birdseed. Tenaya Lake is just visible at the base of the mountains. 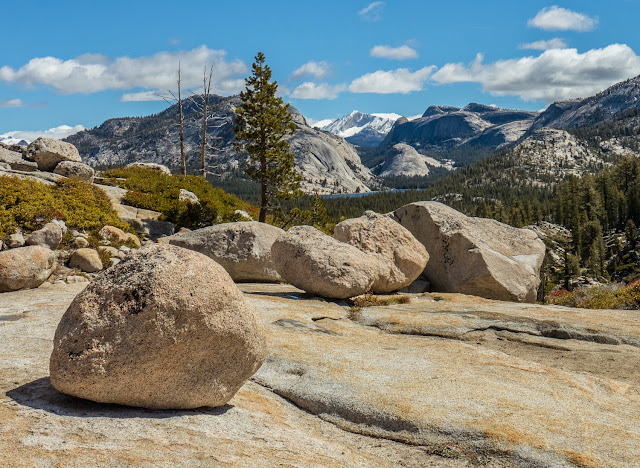 A closer look at the lake and the thousands of acres of trees that were just the beginning of what we saw. We saw limitless swaths of conifers that day, more than I'd ever seen in my life. Thankfully most of it is protected in designated Wilderness, Forest Service, and state land. 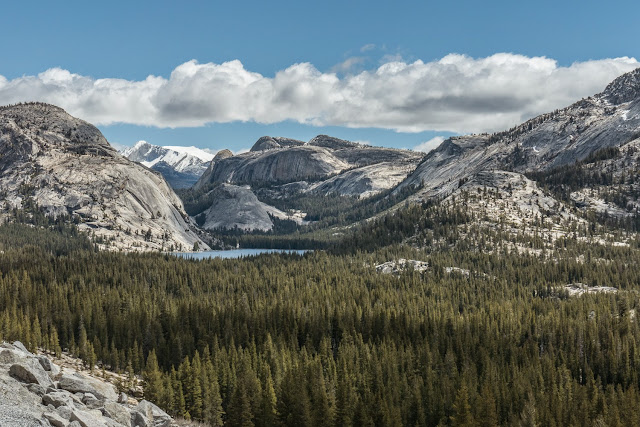 Tenaya Lake comes nearly to the edge of the road. It's at an elevation of about 8100 feet and while popular for winter sports, it may be too cold for all but the hardiest swimmers. The same glacier that carved it out also created Half Dome in Yosemite Valley. 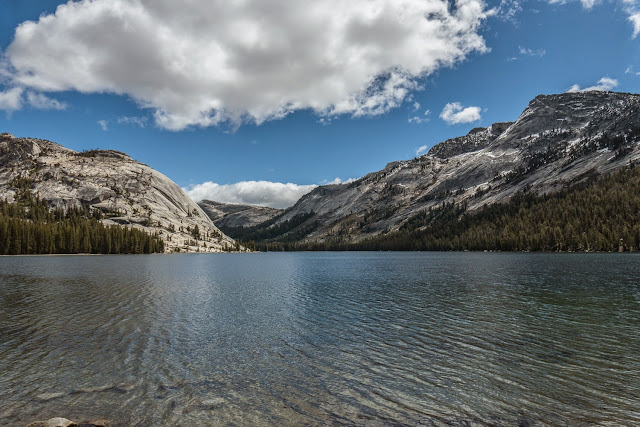 As we passed the entrance station at the east end of the park we made the decision to go the long way around to get back home. There were probably 500 cars in another single, glacial line, just like the entrance station near us at this end. I have a suggestion, Park Service: when there are few cars leaving, establish a stop line in the outgoing lane back from the station and allow one car at a time, holders of park passes only, to enter in that lane. When someone shows up to leave, let them out and then bring another car over to enter. Get a volunteer to be the traffic director and it will cost nothing. It makes sense to me.

We drove through the town of Lee Vining and stopped at the Mono Basin Scenic Area Visitor Center. The most interesting thing there to me were nests built under the eaves at the front of the building. I watched the birds swooping into and away from the nests for a long time and went back into the building to ask about them. They're cliff swallows and the nests are built one mudball at a time. It's a labor intensive process, building the thousand-pellet nests, so much so that a pair of birds can work at it only about three hours a day. The rest of the time is spent resting and feeding. Nevertheless, a nest is completed in a week.

According to the handout I got at the visitor center, observers have seen the birds scoop up mouthfuls of mud and hover over the puddle, seeming to test the weight, and then fly off with it to the nest, which can be used for several years. They're sometimes abandoned if pests such as mites invade the colony but once the invaders' numbers have decreased the birds will again populate the nests.

What looks like beige beaks peeking out is actually coloring on the forehead; the beak extends from the bottom of the triangle. 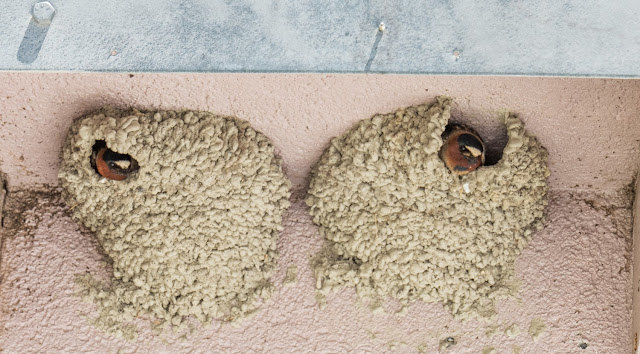 Shortly after the center was built nets were installed to prevent the birds from moving in. I think common sense prevailed in the end because the birds continue to make their condo-like homes under the sheltering overhang.

Just past the visitor center is Mono Lake, these days a relatively nondescript body of water, to me at least. Many years ago Voldemort and I took a long motorcycle trip from Washington state down through much of California, including  over Tioga Pass in Yosemite and past this lake, which was gorgeous to me at the time, to say the least.

Below is a section of Mono Lake with some of its tufa formations exposed. I've seen some spectacular photos of the formations but the spectacularity wasn't on exhibit when HH and I went by. Check out the wikipedia article on tufa to see what I mean. 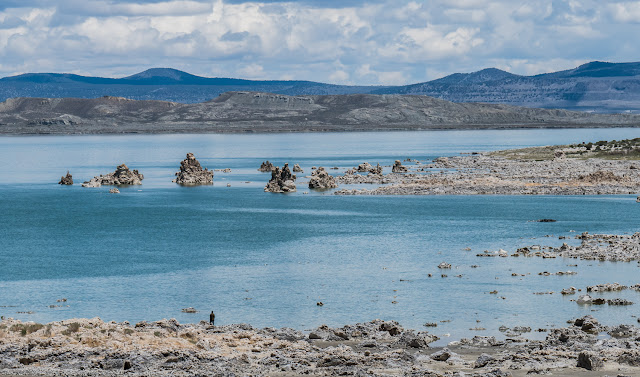 The road over Sonora Pass tops out at just over 9600 feet, less than Tioga Pass but much more challenging to drive and, in my opinion, more beautiful. It runs east-west north of Yosemite, through Stanislaus National Forest. There are endless S curves, switchbacks, hairpin turns, a grade of 26% in one place, and not a lot less in others. This is not a road for those tending to motion sickness, and I was very glad I was driving. As we approached the road we saw signs warning about travel trailers and other rigs over a certain length, and as I continued the drive I could easily see the folly of heaving a 6-ton trailer around those turns. I couldn't have done some of them and stayed in my lane.

It is a breathtaking drive. We stopped just a couple of times, one of them being at Donnell Vista, an overlook showcasing a reservoir snugged deep in the canyon.

The puddles in the rock below made me think of the acorn grinding rock I saw on the Merced River. I think it possible that was the use made of this rock as well, or it could be a remnant of glacial carving. 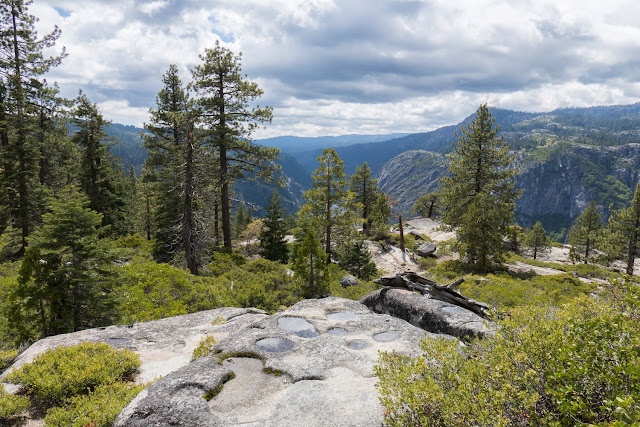 The clouds were moving in. As I turned to go back to the truck the peak of a nearby mesa was being obscured by what looked like low clouds but were probably at 8000 feet. This was another good image for black and white. 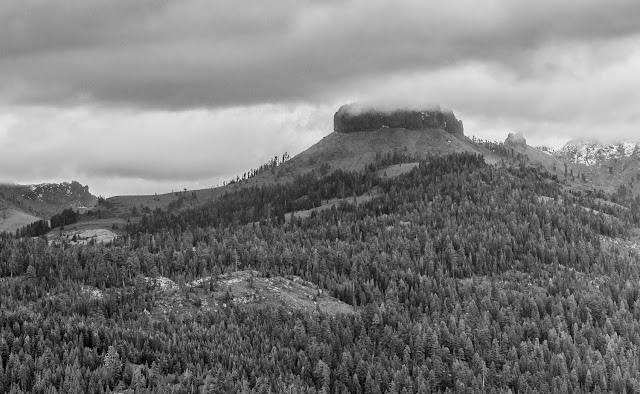 I was getting tired and still had many miles over winding roads to go, but it was a wonderful trip. While I was looking up facts about some of the places I mention here, I saw that we missed a lot of places where we should have stopped. There will be another road trip, maybe when the leaves are turning in the fall.

Trees are the earth's endless effort to speak to the listening heaven. - Rabindranath Tagore
at 6:45 PM