East of the Sierra again

Yesterday we had huge, gigantic plans to go over Tioga Pass and see half a dozen things before coming back. We always do this and we never manage to get it all done. I think we saw about half of the list and it was still worth the drive.

Outside the fee station on the east side of the park is this lovely view. There were no cars lined up to get into or out of the park, and only one other car at the pullout, a far cry from a couple of weeks ago. 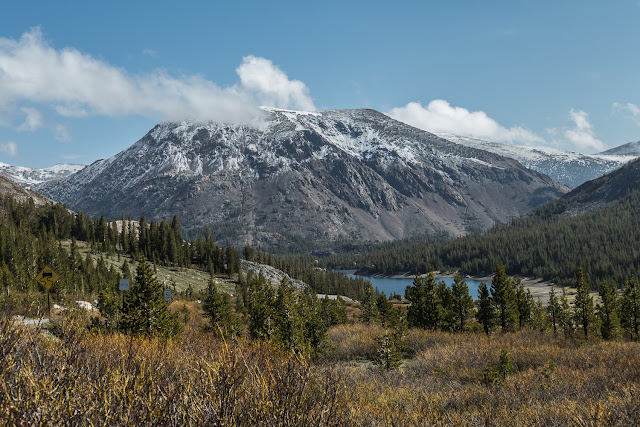 There's still a good distance to drive after leaving the park on the way to Highway 395 that runs north and south. It's the same road that Manzanar is on, south of here.

Clouds were gathering over the Sierra. I love how the sky looks when they gather over the mountains. 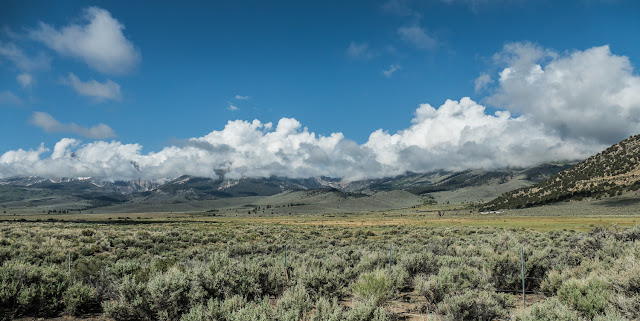 I heard a Ranger at Yosemite say there is no such thing as the Sierras, or the Sierra Nevadas. It's just the Sierra. The name comes from the Spanish, meaning snowy mountain range. From this website comes a lively discussion on the irritation Sierra-philes feel with the pluralization of any part of the name. It also summarizes the history of the name:

The great mountain range that dominates Tulare County has a Spanish name. The title dates back to April 1776, when a Spanish soldier named Pedro Font pushed inland from newly discovered San Francisco Bay and saw a range of high mountains far to the east.

Describing what he saw, he mapped the feature as una gran sierra nevada - literally "a big snowy mountain range." The name stuck. We still use it more than two centuries later.

Notice that Font, on that first day of European awareness of California's biggest mountains, got something very basic right. He grasped on that long ago day that California's Sierra Nevada was a single, continuous entity. This is why he called it the Sierra Nevada. If he had thought of it a complex of mountain ranges, he could have used the plural form: las sierras nevadas. But he didn't.

The Spanish language habit of calling a mountain ridge a sierra dates back a very long time. The word originally meant "serrated," and thus also came to mean "saw blade." 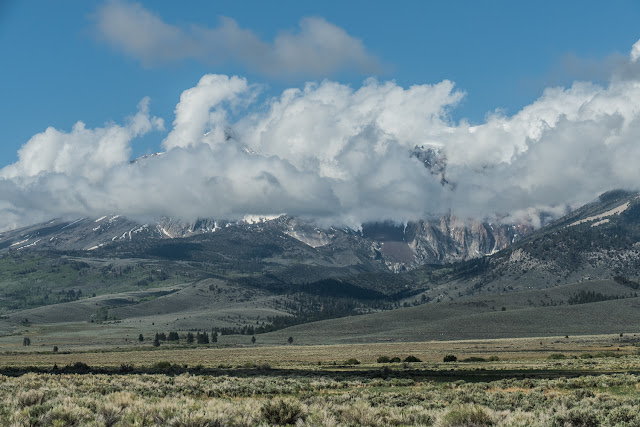 One reason our eyes are always bigger than our accomplishments is we have never met a side road we didn't like. The plan was to drive directly to Devils Postpile National Monument but when I saw the June Lake Loop road approaching and asked HH, "OK?" and he said "Of course!" our itinerary was doomed.

The loop road not only goes by June Lake, but also Grant, Silver, and Gull Lakes. It's a resort community tucked away from the highway and the busyness of Yosemite, and altogether as pretty. There are many campgrounds along the loop, most of them on one of the lakes or another, and fishing must be good because anglers were out all over.

After driving the loop we continued south on 395 to the turnoff for Mammoth Lakes, Devils Postpile, and Rainbow Falls. Just before the entrance station to the Postpile and Falls is a turnoff to the viewpoint for the Minarets, peaks off in the distance.

I like old interpretive signs. At least I think it's an old one; the newer ones are slick and colorful. This etched metal sign is classic. 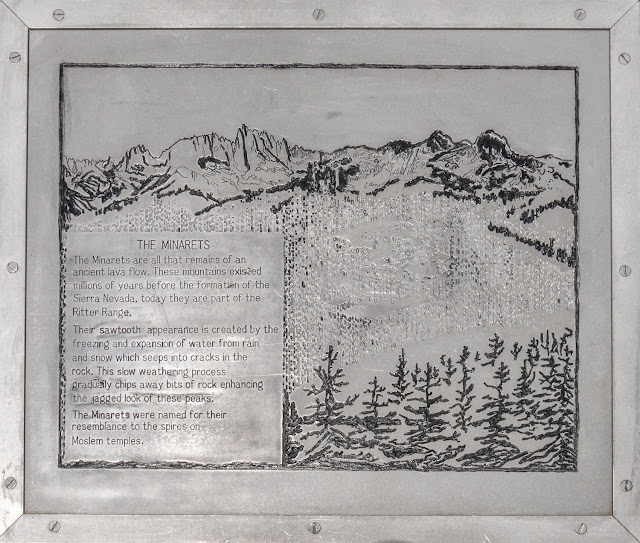 Here is a far-off view of the Minarets, to the right of center. 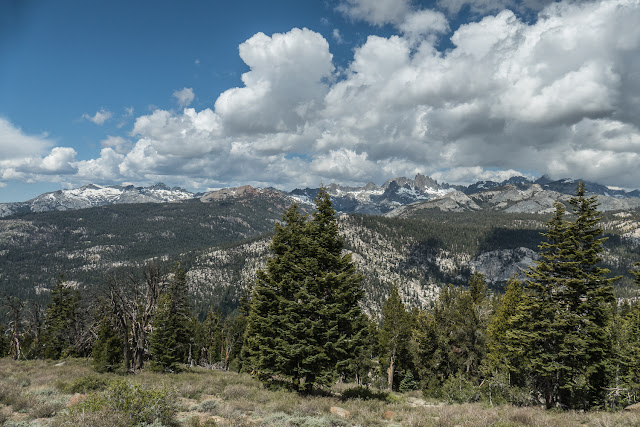 And here is a closer view. Because sierra means serrated or sawtooth, the term could also be used for that small part of the range if someone hadn't made the fanciful connection to Arabic architecture. According to Wikipedia, the minarets collectively form an arête, an almost knife-like ridge of rock which is typically formed when two glaciers erode parallel U-shaped valleys. They're a prominent feature of Ansel Adams Wilderness, formerly called Minaret Wilderness. Oh, the stuff I learn when I write this blog. 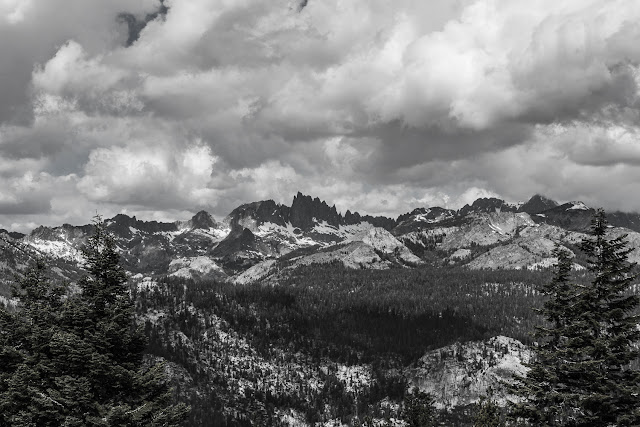 In the opposite direction is Mammoth Mountain, a ski area when they get snow. You can see the lift line on the far left slope and between the two peaks on the left. More Wikipedia: Mammoth Mountain was formed in a series of eruptions that ended 57,000 years ago. However, Mammoth still produces hazardous volcanic gases that kill trees and caused ski patroller fatalities in 2006. 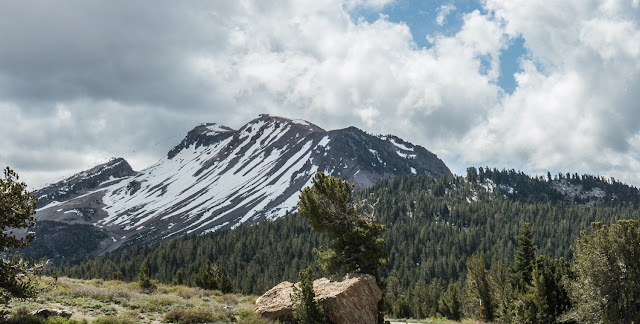 Here's something else I love about the old interpretive displays. At the top of the pole is a metal pipe that's parallel to the ground. Pivot the pointer to the sight you want to see, look through the pipe, and there it is. Old school, low tech, and eminently useful. 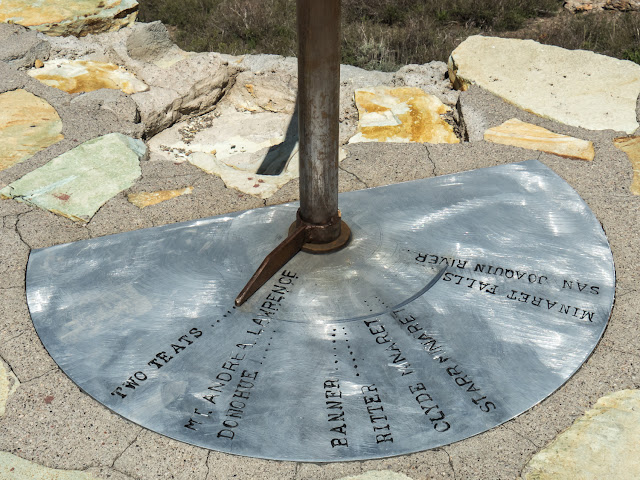 After I got to use my new Golden Age Pass at the fee station, thanks to being eligible for Social Security, we drove to the parking area for the Devils Postpile. It's a different kind of geologic feature that I haven't seen outside of this part of California, volcanic in origin, unbelievably hot conditions that slowly cooled, creating geometric columns.

In 1910 mining interests wanted to blast this area in order to dam the San Joaquin River. Thanks to a few good men, President Taft named Devils Postpile a National Monument in 1911, quick work when you think about the glacial pace of most government work. 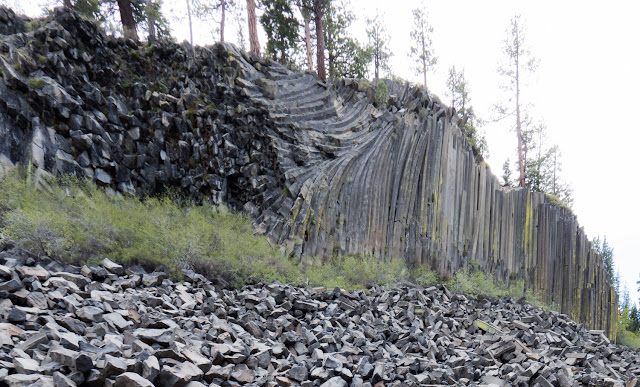 Isn't that amazing? There are areas of tortured rock in Death Valley that go against everything you think you know about rock not being bendable, and here's another graphic example. 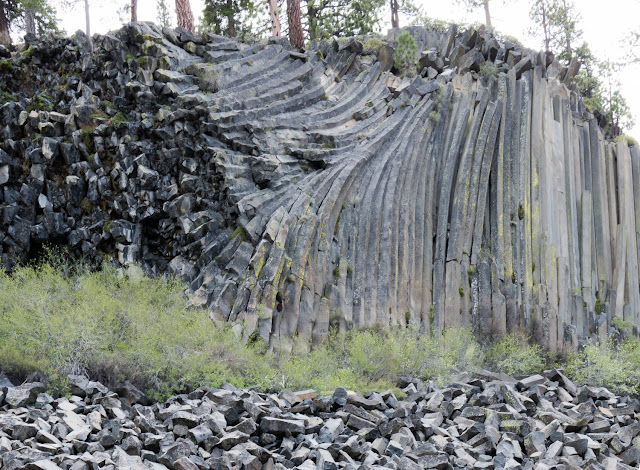 When we drove over Sonora Pass a couple of weeks ago I made a quick turn into a parking lot labeled with the sign Columns of the Giant - too good a name to pass up. It's another example of the same ancient rock formations as the Postpile, but here there are no prohibitions against climbing: 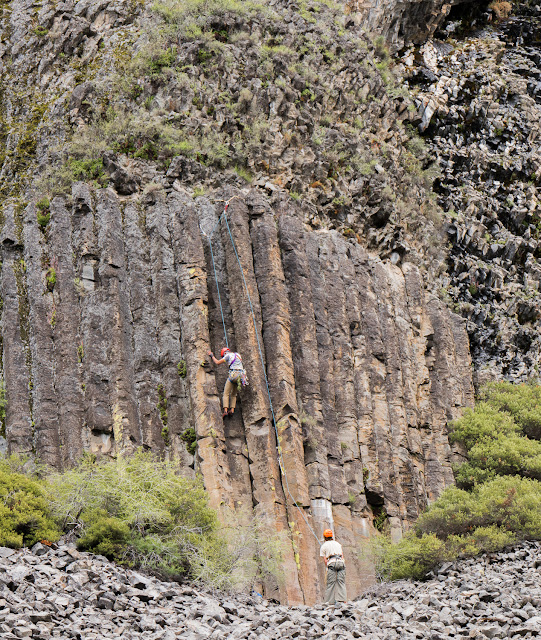 Almost back to the parking area was a pretty framed scene of river, greenery, mountain, and clouds. There were people fishing along the river, a nice place and way to spend the day. 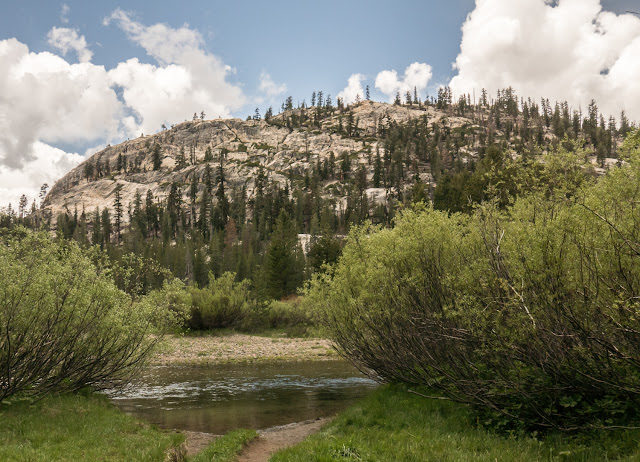 After returning from the short walk to the Devils Postpile we drove a little farther down the road to the trailhead for Rainbow Falls.

The Rainbow Fire blew its way through the area in 1992, ultimately burning 8,000 acres of dense forest. It seems renewal has been slow, but a nearby sign says sun-loving ferns, herbs, and berries are providing food for a variety of animals, who themselves are food for animals up the food chain. The sign also said that prior to settlers moving in, fires occurred every eight to thirty years, but due to grazing, fire suppression, and the decline of the Native American population (which regularly burned off the land) fuel in this area had accumulated for 117 years, contributing to the severity of the blaze. 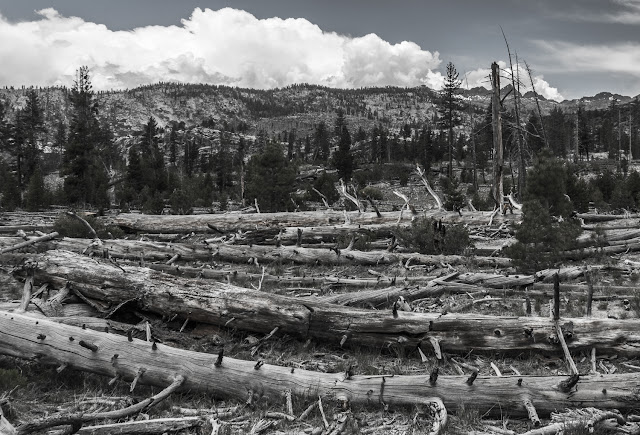 I found the stark landscape photogenic... 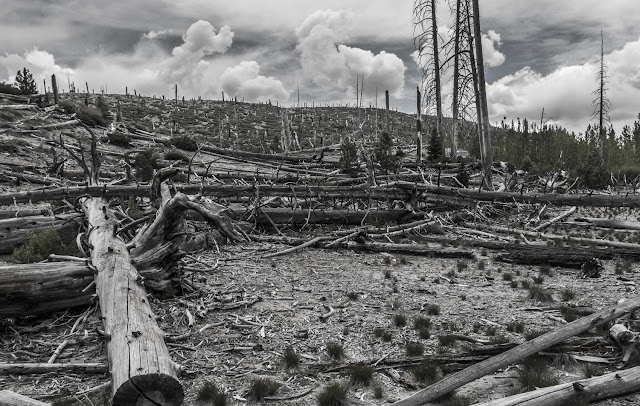 ...and had fun with forced perspective. You've seen photos of people holding up the Tower of Pisa? This highly sculpted tree trunk held a mountain top in its pincer grasp. 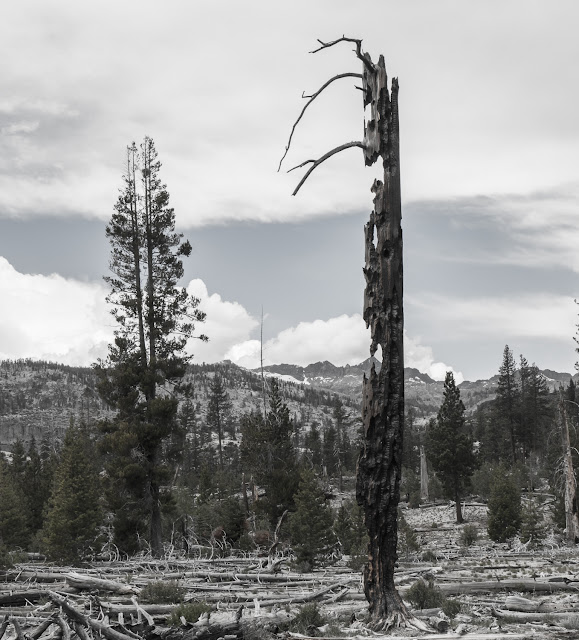 It was an interesting fire-made totem and I told myself I'd stop on my way back from the falls to get more photos, but I was getting rained on by then and didn't linger. 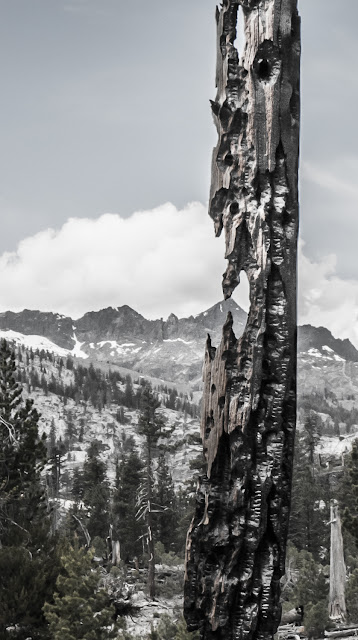 Here was the goal at the end of a mile-and-a-quarter walk. The 101-foot Rainbow Falls is so called because at midday a rainbow arcs across the mist just above the river. It wasn't a day for sunshine and rainbows but the falls were beautiful nonetheless. 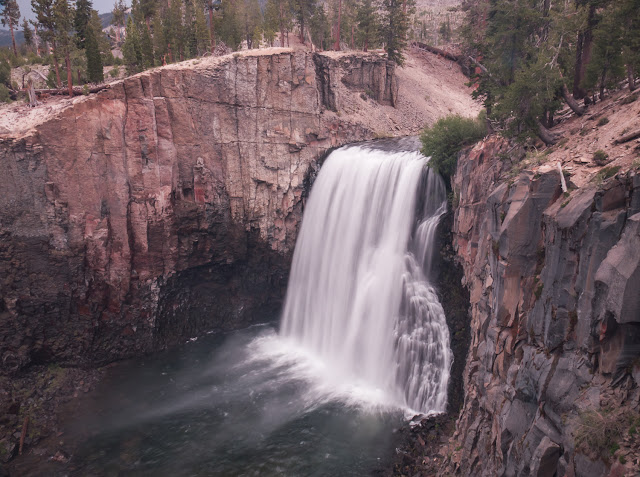 The tiny side falls are especially pretty. 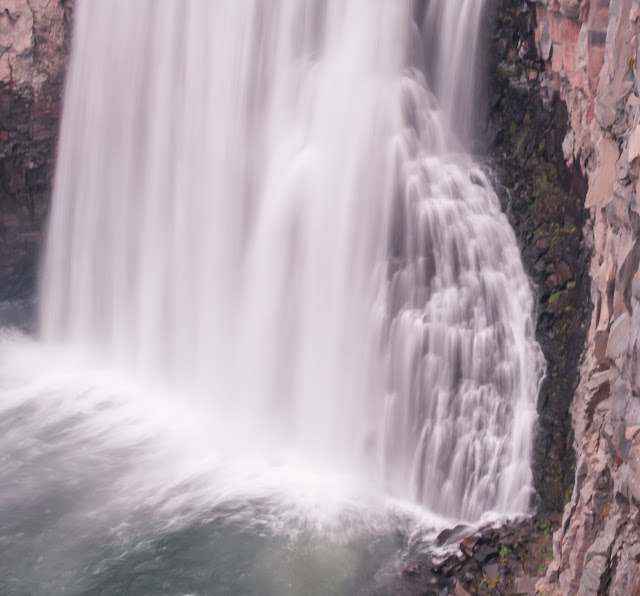 The walk back to the trailhead was uphill. What is it with this country? Even though it was just over a mile, the elevation is in the neighborhood of 8,000 feet and I felt every step.

We continued to Mammoth Lakes for lunch, then decided to go home. Bishop, and the Bristlecone Pine Forest, were another 45 minutes south and the day was getting late. There's so much to see on that side of the Sierra so we know there are more trips we need to make across the mountains.

The clouds continued to move in and we drove into rain, and then snow, as we approached Tioga Pass. 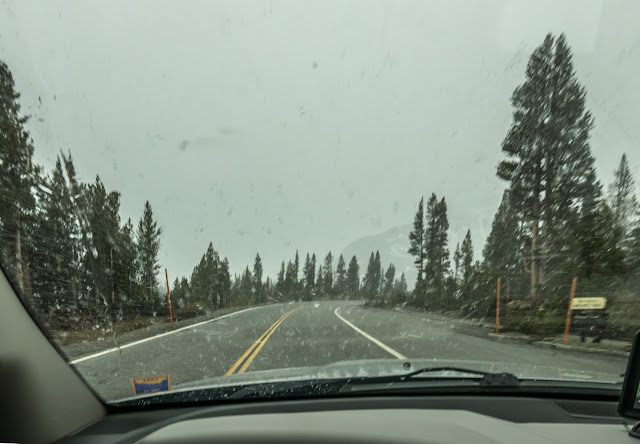 The ranger at the entrance station welcomed us with a Merry Christmas, also saying that there was no snow all winter and this is June in the Sierra. 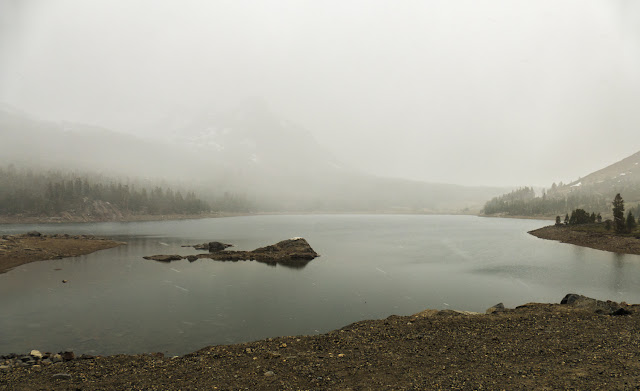 Note the temperature: 34 degrees at 10,000 feet. By the time we got home, the temperature was back to about 75 and the house air conditioner was going full blast. 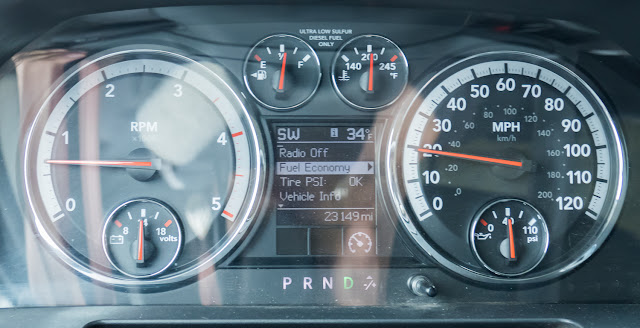 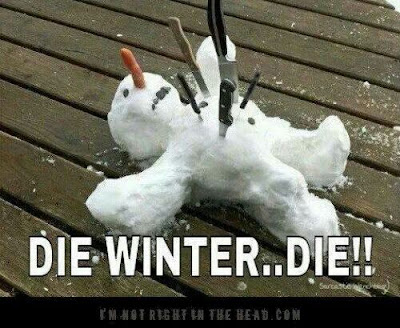