It seems like ages ago when HH and I went to the Titan Missile Museum south of Tucson. We were there at the beginning of October, when we first went to Tumacácori, so it's been about nine months. I coulda birthed a baby in that time. What a nightmare to even think about. 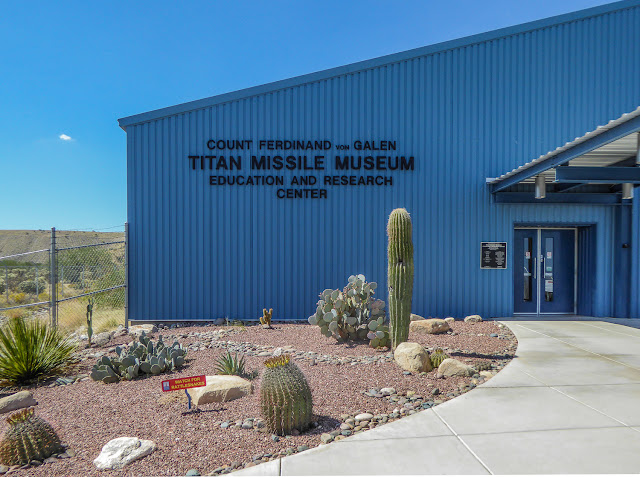 Across from the museum entrance is this framework for a Christmas tree, complete with the Bethlehem star up top. 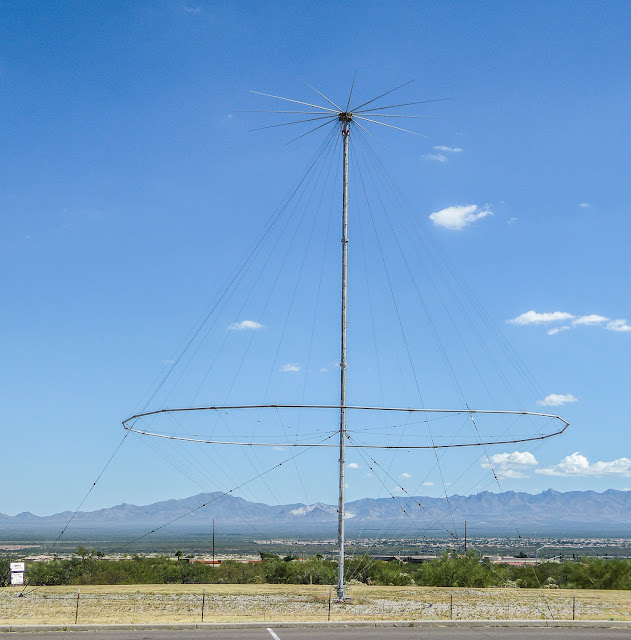 The sign on the fence reveals that this thing is an antenna, and says there's a danger from high frequency radiation so I stayed across the parking lot. I'm sure they're joking. 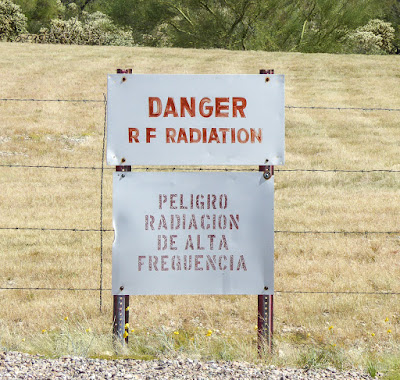 A gigantic rock near the entrance is a five ton chunk of azurite and malachite from Morenci, Arizona that was donated by a local couple. Not to be a cynic or anything, but what does this have to do with Cold War missiles except as a tax deduction for the donors? There must be a connection I don't know about. 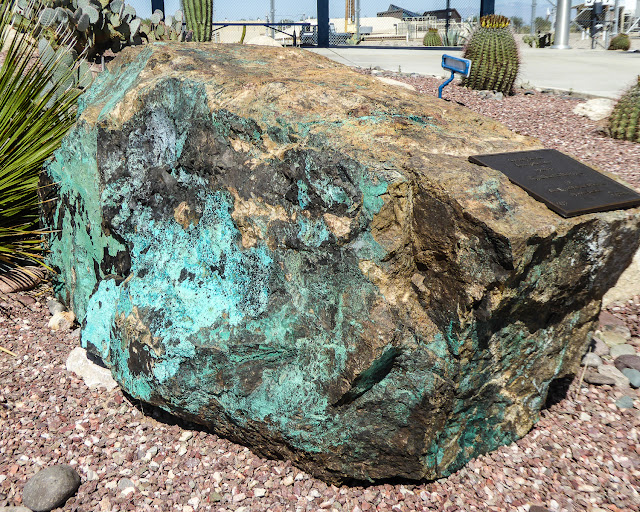 A sign at the museum tells how the one lone missile remaining in the silo survived.

In September 1981, the Reagan administration decided to deactivate the TitanII ICBMs. Over the next few years the missiles were removed from the silos and placed in storage for use in launching satellites. In order to assure the Soviet Union that the silos were being deactivated according the the SALT treaty each silo was first stripped of useful equipment and then the top 25 feet of the silo was blown apart using 2,800 pounds of explosives. After being left exposed for several months so that Soviet satellites could verify the destruction the remains were filled in and covered to look as much like the surrounding area as possible. Only one silo escaped destruction to become the Titan Missile Museum.

Entrance to the silo is by guided tour only. The tour we took led us about 35 feet underground, beginning in a literal hole in the ground called the Access Portal. Signs at the top of the stairs warned about rattlesnakes so I was sure to not be first down the steps. From there we passed through the Blast Lock Area with a concrete and steel door that weighs three tons, then walked down a corridor... 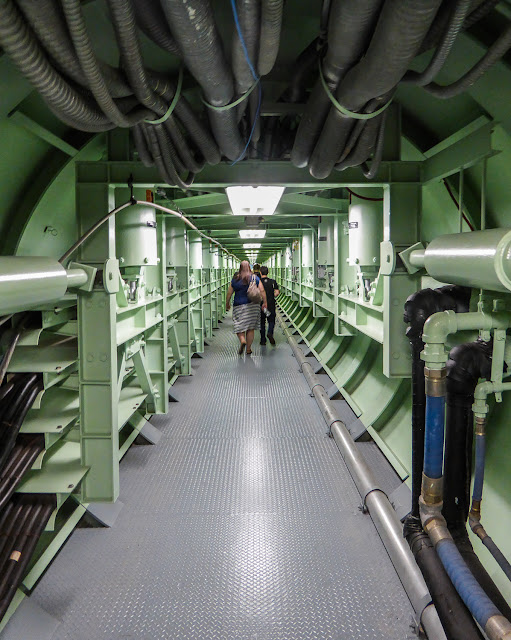 ...to the Launch Control Center. The tour guide asked for a volunteer to sit at the command panel. He chose a boy who turned out not to speak English, so this man, below, elbowed his way forward and took over, but he didn't get to do anything.

It looks like a lot of empty space, doesn't it, less complicated than the cockpit of an airplane? The simplicity belies the strict regimen that was adhered to by the staff that monitored it in in 24-hour shifts. The website Roadside America says this:


The scariest part of the Titan Missile Museum is not the missile itself, but the antiquated equipment on which our national security once rested. It looks marginally better than the creaky instrument arrays in old science fiction movies[,]

...with analog dials, toggle switches, and a punch tape reader to feed the coordinates into the guidance system. All low-tech but high-power.

Wikipedia's article on the museum says the closest the missile came to being launched was when Kennedy was shot. Suspecting the Russians, whoever was in charge of such decisions ordered that the keys used to launch the missile be placed on the tables at the launch consoles in preparation. Just in case. The keys were not placed in their switches. 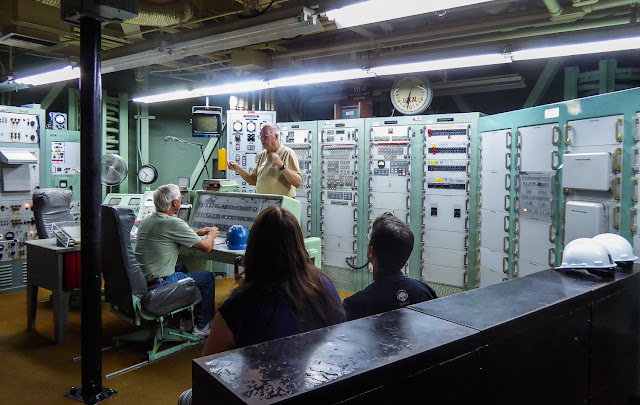 Most of the area is a mandatory No Lone Zone, both for safety and security. There were many fail-safe measures in place. 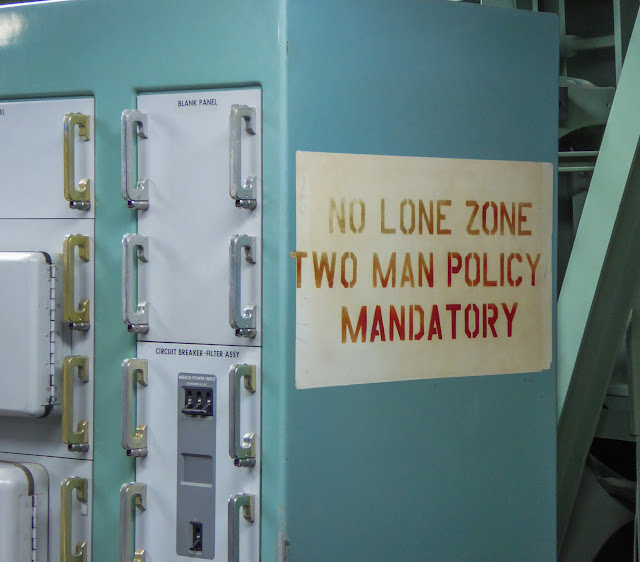 All of the normally stationary parts of the launch area are mounted on springs, and the walls aren't attached to the floors, allowing them to move independently, thereby protecting the complex from attack. In other words, if it was struck first, it should still be able to retaliate. I'm not sure about the science of that. Wouldn't it have been vaporized? 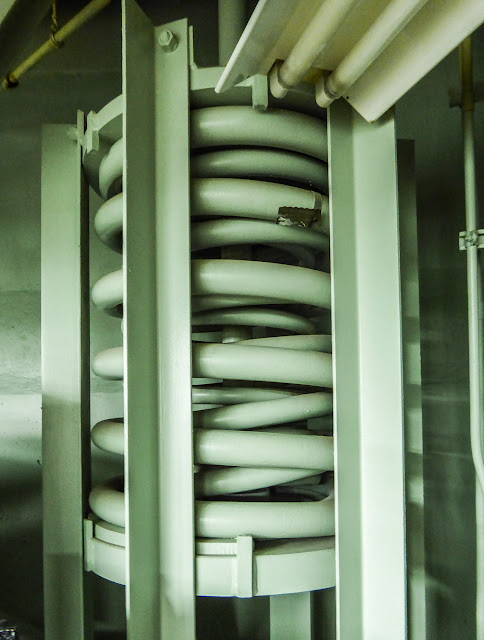 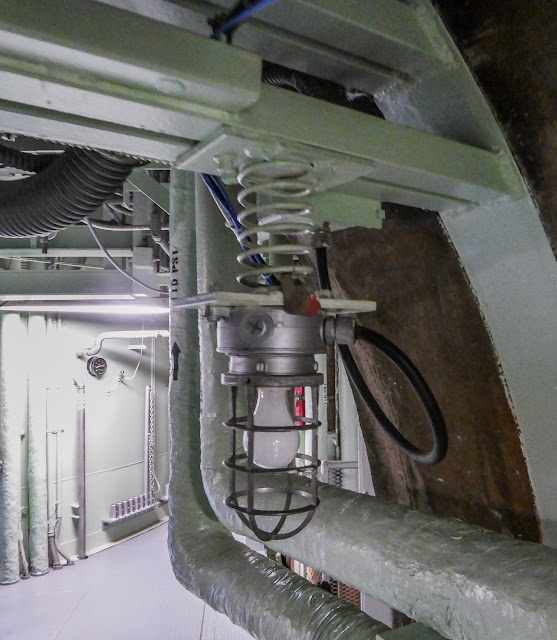 After the interesting session in the Launch Control Center, we were taken over to the silo. 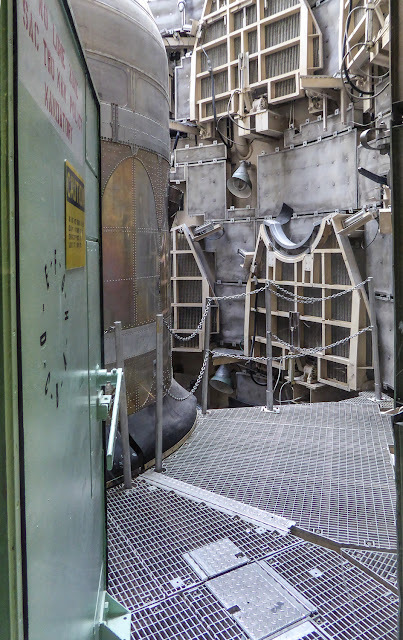 The advantage Titan II had over earlier missiles came from its fuel. Earlier missiles relied on liquid oxygen as part of their propellant, which boils away rapidly at normal temperatures, so it couldn't be stored aboard the missile. It had to be loaded just prior to launch, which took time.

Titan II used two chemicals that were stable at around 60 degrees, so the missile could be stored in the silo, ready to go at any time, and could launch in less than a minute. 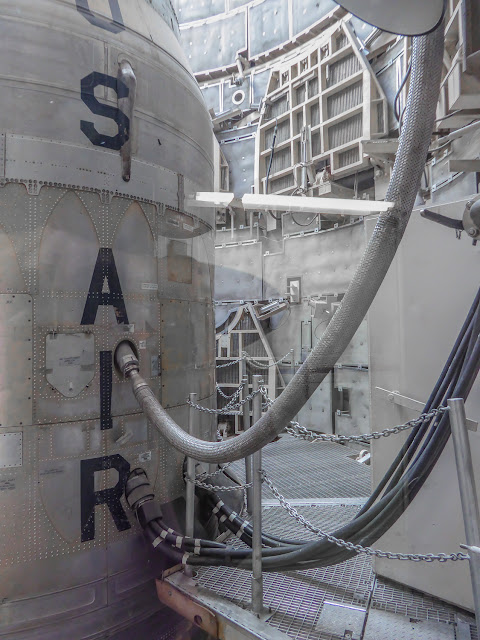 Each of the 54 Titan II missiles - 18 each at Little Rock, Wichita, and Tucson - had a 9-megaton warhead that could be delivered to targets more than 6,000 miles away, and was capable of taking out a 900-square-mile area. Its top speed was about 16,000 miles an hour. This is the only remaining missile silo; all the others were demolished. 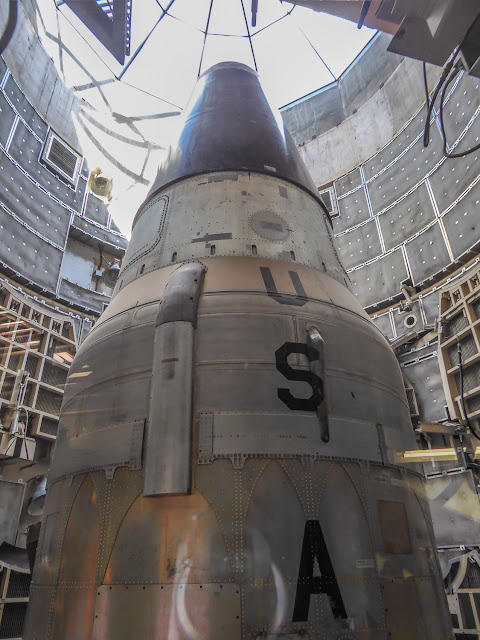 After the underground guided tour, we were allowed to roam around aboveground by ourselves.

The security at ground level included these motion-sensing devices, installed at four corners of the grounds. They were called AN/TPS-39, shortened to "tipsies" (from the TPS part of the name) by the crew of the complex. Over the 25 years the program was active, there was never a serious security issue. 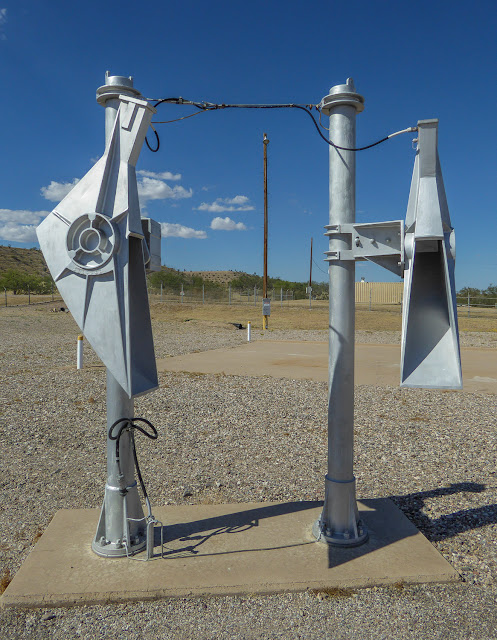 Looking down at the top of the missile. 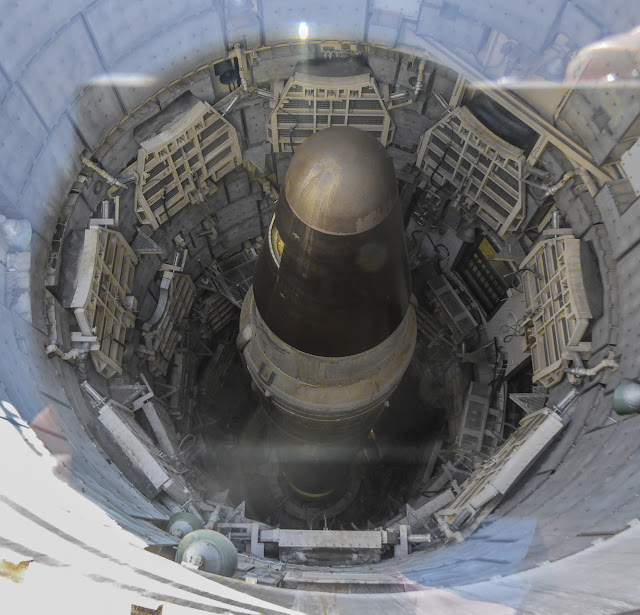 I expected the museum to be a National Park Service Historic Site but it's not; it's run by a nonprofit foundation. Many of the volunteers are retired engineers and scientists. The two guides we had, one at the introductory film and the other underground, were knowledgable beyond the canned presentation. In addition, the museum's director is a former Titan II Missile Combat Crew Commander, and gives her own separate tour, from the perspective of a commander.

I don't know why you use a fancy French word like detente when there's a good English phrase for it - cold war. - Golda Meir
at 11:02 AM