Mama got a new set of wheels

When we were still at Death Valley I started to get the itch for a 4-wheel-drive vehicle because so much of the park is inaccessible without the traction of the two extra wheels. We of course had a truck; it was HH's dowry when we started cohabitating, but it was only two-wheel-drive.

It seems the vehicle of choice in those parts is the Subaru. They're small, 4WD, have high clearance for the rough backcountry roads, and one of the models is long enough to allow full-length sleeping in the back. I started getting Subaru envy and even looked at them at a dealer in Las Vegas.

If this was going to be my solution, it created the problem of transporting it when we're on the move. Two drivers? Tow it behind the trailer? Towing flat requires a standard transmission, and it turns out that the Subaru model that's long enough to sleep in is no longer made that way. The other alternative, maneuvering a 65-foot rig through traffic, wouldn't be fun under any circumstances, so I was back where I started.

Then HH had the idea of getting another truck and that's what I did. I found a sweet Dodge Ram in Fresno that had just about everything I wanted and we went over to get it. 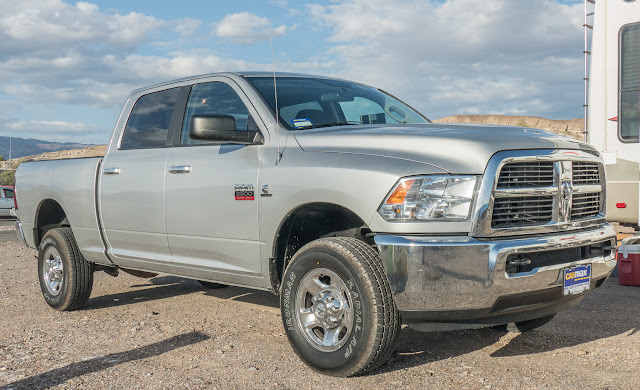 It's a 2012 diesel model and had just 19,000 miles on it. One thing we really wanted was a short bed on the back. When we were at Big Bend a while ago we talked to a man who was driving a short bed pickup with a 5th-wheel hitch in the back, which I had no idea could be done. Someone came up with a brilliant hitch that slides when you make a turn, giving an extra sixteen inches so the corner of the trailer doesn't crash into the cab of the truck. When a fellow volunteer told me about the damage he got when he forgot to manually release his hitch, it convinced us to spend a little more to get the version that automatically slides and returns to its normal position. It's a miracle to behold.

We also got the model that mounts under the bed of the truck. This allows us to knock out four pins and remove the hitch, leaving a completely flat truck bed, perfect for camping. Amazing. HH, clever man that he is, also bought a hoist that that hooks onto the hitch and swings it out and to the ground. We were going to remove it when we got here, to save a couple of hundred pounds extra weight, but because it's now fire season it's better to leave it installed so we can make a quick getaway if needed.

After that was done, we installed a rollup tonneau cover that cuts down wind resistance when we're not towing and is fastened open with straps when we are. Finally, after two disastrous online purchases of running boards that didn't fit, we had the right ones installed in Fresno a couple of weeks ago. That's all just on the outside.

In general, I'm not interested in mechanics. If something does what it's supposed to do, that's all I need to know. I don't care about how or why, just that it does. But this truck has the best transmission of any vehicle I've ever had. I can't explain it but it tows like a dream and when we're not towing I can use a manual override to the automatic transmission that's particularly effective, to keep from having to use the brakes on the many downhills around here. It's a heck of a truck.

And how does it do on backcountry roads? I wouldn't know. I never had a chance to take it into the wild beyond before we left Death Valley. Next winter for sure when we go back.

You might be a redneck if...you have spent more on your pickup truck than on your education. - Jeff Foxworthy