There has been a lull in the activity at my house. HH was gone for over a week, and the two weekends I had by myself were filled with hanging out in the house in sweats, studying Spanish, reading, getting in early-morning walks, and binge-watching Friends on Netflix. There's not much blog fodder in any of that, but golly, I love streaming.

He's back and yesterday we went over the mountains again, this time to Bodie, the site of a gold mining town that was known as the "most lawless, wildest, and toughest mining camp in the West." Bodie is on the National Register of Historic Places, is a California Historic Landmark, and was made a California state park in 1962.

Founded in 1859 by W.S. Bodey and E.S. "Black" Taylor, it became one of the richest gold and silver strikes ever. The mill was established in 1861 and the town began to grow, starting with about 20 miners. Over 25 years, one source says it yielded almost $15 million in ore, another says $34 million.

According to Wikipedia, "the district's name was changed from "Bodey," "Body," and a few other phonetic variations, to "Bodie," after a painter in the nearby boomtown of Aurora, lettered a sign "Bodie Stables." The website DesertUSA disagrees, saying that the change in spelling of the town's name has often been attributed to an illiterate sign painter, but it was really a deliberate change by the citizenry to ensure proper pronunciation.

By 1879, Bodie had a population of 5000 -10000 people (every source has a different number) and around 2,000 buildings. Toward the end of the 1870s, some of the single, get-rich-quick miners had moved on to new horizons and families moved in, along with robbers, more miners, store owners, gunfighters, prostitutes, and people from every country in the world. At one time there were reported to be 65 saloons in town. Among the saloons were numerous houses of ill repute, gambling halls, and opium dens – an entertainment outlet for everyone. There’s a story about a little girl whose family was moving from San Francisco to Bodie; depending on who tells it, she wrote in her diary either “Good, by God, I’m going to Bodie.” -or- “Goodbye God, I’m going to Bodie."

California coined the term "arrested decay," which means the structures that were in place in 1962 when Bodie became a state park will be maintained as they appeared in that year, but only to the extent that they will not be allowed to fall over or otherwise deteriorate in a major way. By putting new roofs on the buildings, rebuilding foundations, and resealing glass that is in window frames, the State is able to keep buildings from naturally decaying. Nothing, though, can stop the wildfire and lightning strikes and time that have destroyed all but a hundred or so buildings, nor can anything now protect the land from the cyanide and mercury used indiscriminately in gold processing.

Except for the stamp mill, farther down the page, and the area of the poisoned land, visitors are free to wander the town. There might be a building or two that's open to walk into, but generally, to see inside, you have to climb on a rock or a log to peer through the grimy windows. It has the effect of a visual eavesdropping on the lives of Bodie's former inhabitants.

I took a ton of photos and got them all processed. Some I left in color, when conversion to black and white just didn't look right, but the following have the look of the past that I hoped to convey. Some have no commentary from me; I think the buildings can tell their stories just fine, on their own.

Electricity was introduced in 1892 when the Standard Company built its own hydroelectric plant thirteen miles away. This pioneering installation marked one of the country's first transmissions of electricity over a long distance. 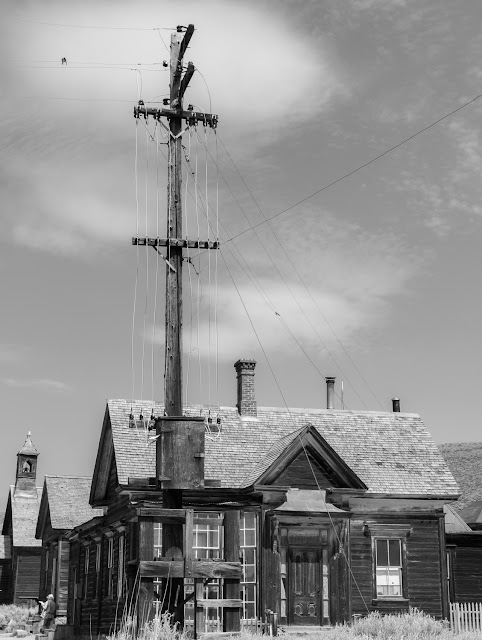 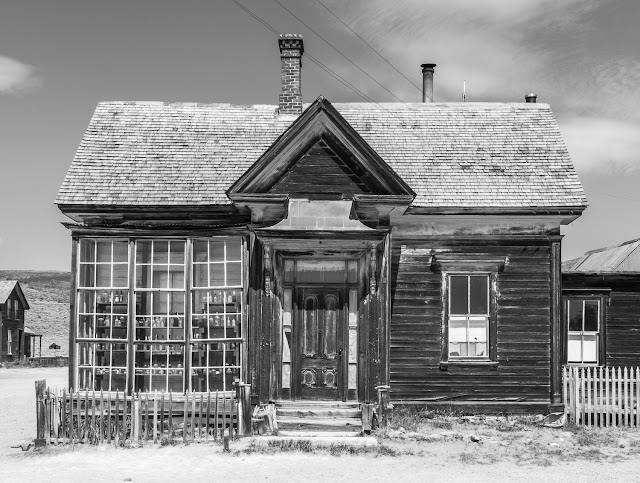 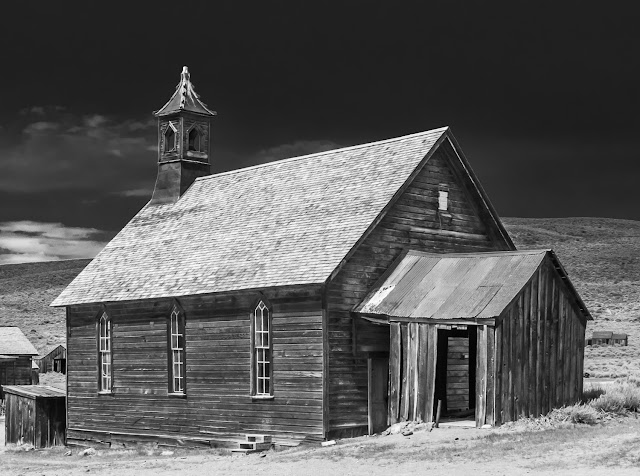 The sky wasn't this dark and forbidding; I did this because I liked the effect. 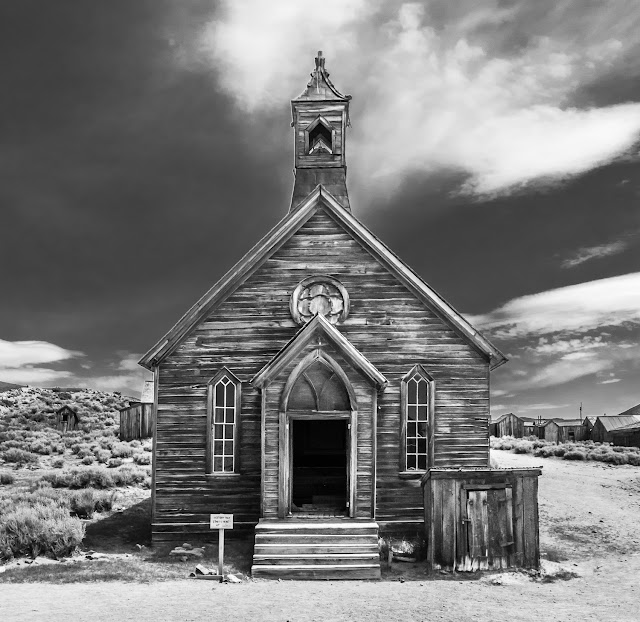 The windows in all of the buildings have probably not been cleaned in decades. My initial thought was, great, there goes my photos, but the results were perfect: the mists of time, and all that. 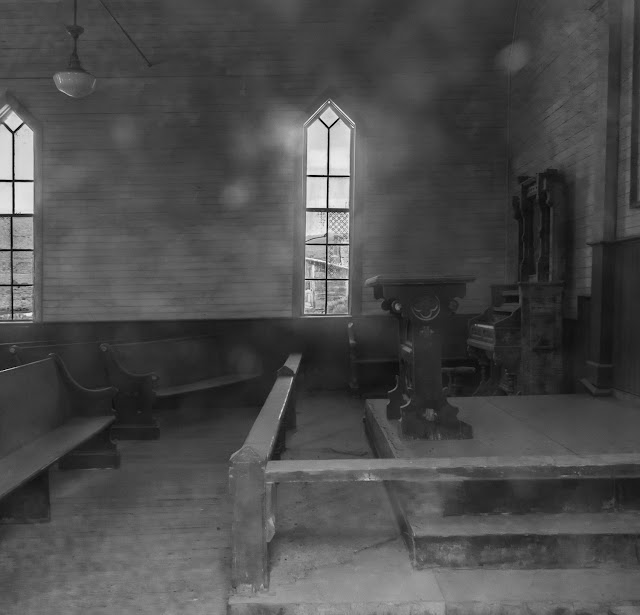 Everything in every building is as it was left. For whatever reason, when people left Bodie they took themselves and nothing else. HH thinks it might be because the furnishings belonged to the company, not to the inhabitants, but we don't know. I for one am astonished that it wasn't cleaned out by thieves decades ago. 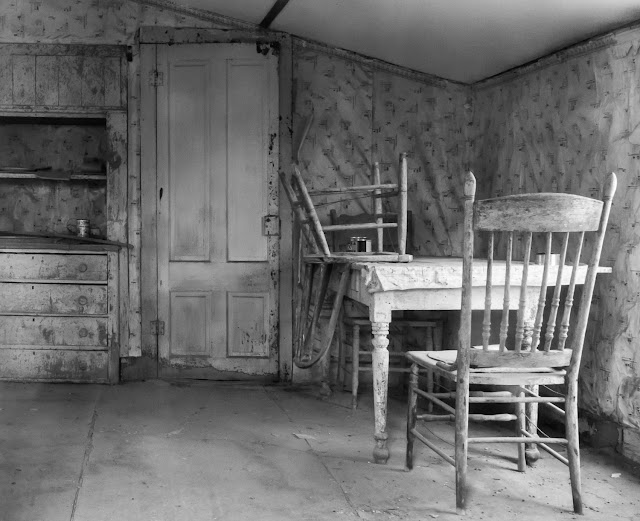 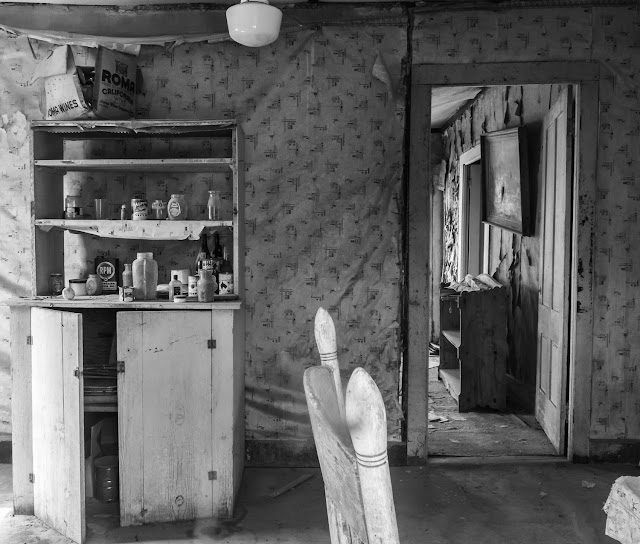 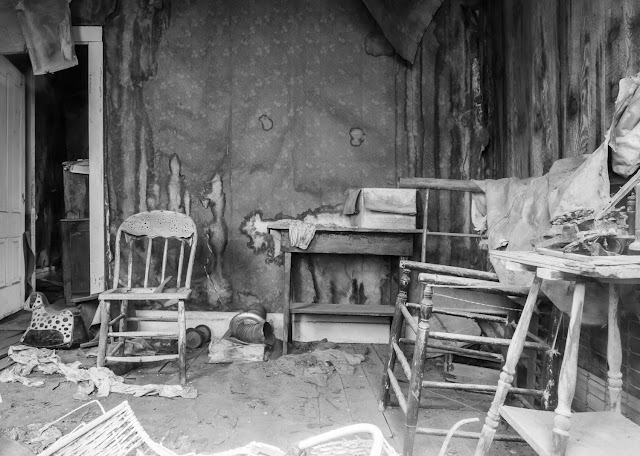 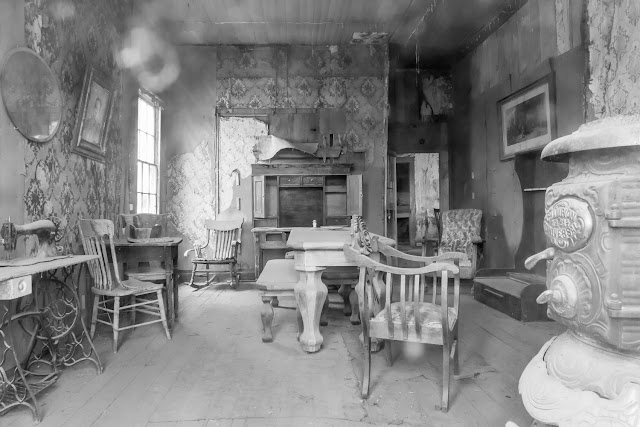 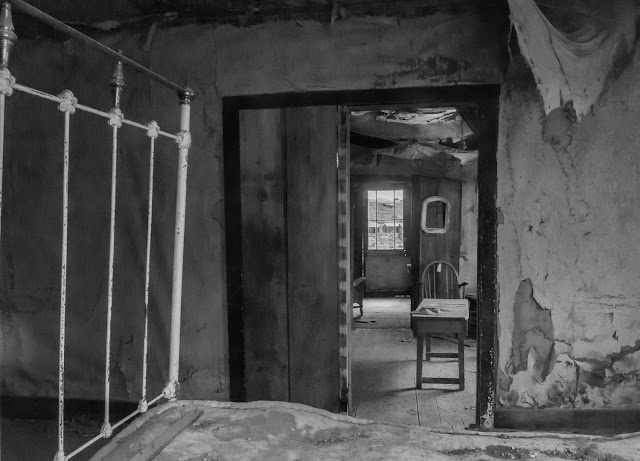 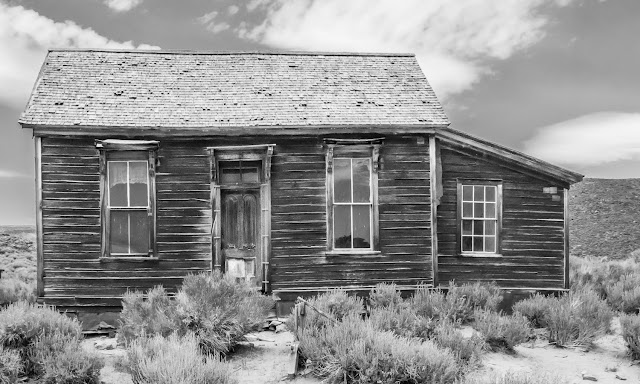 I once paid almost $1000 for a dresser like this one, and now wonder who that woman was. I did it because it was similar to one that my grandmother had; why was that so important? 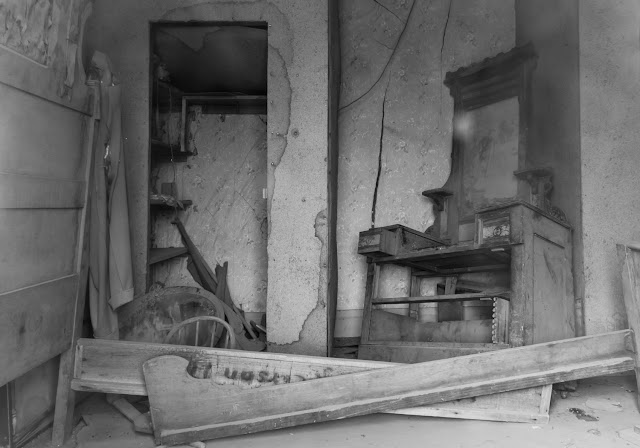 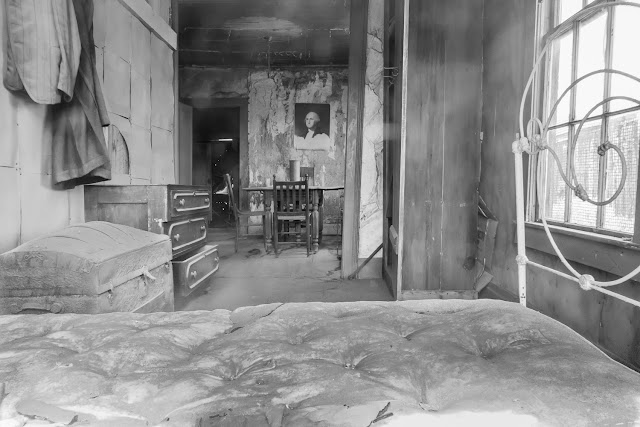 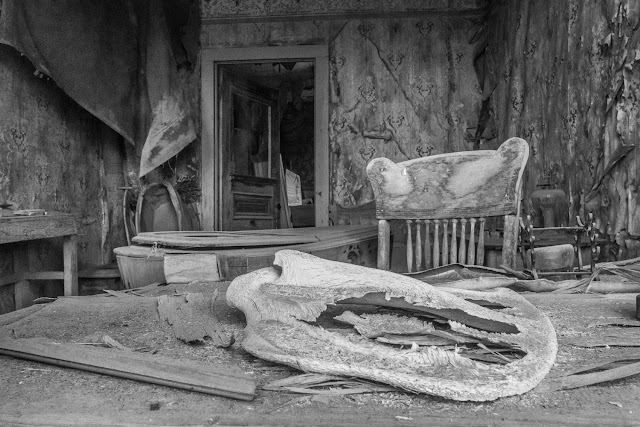 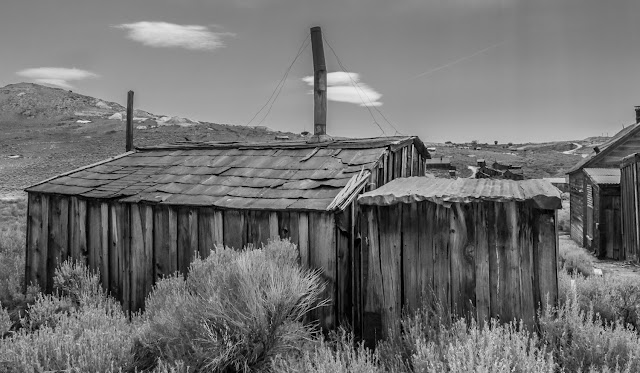 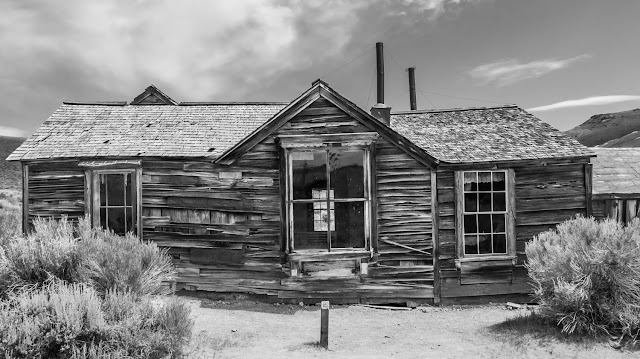 One of four or five fire stations but the only one left. 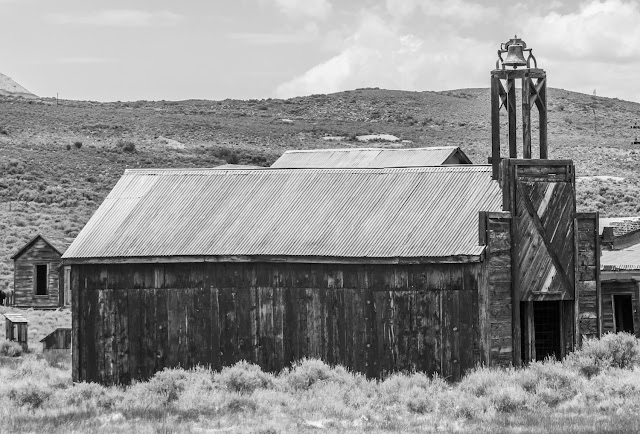 I think this was the jail. 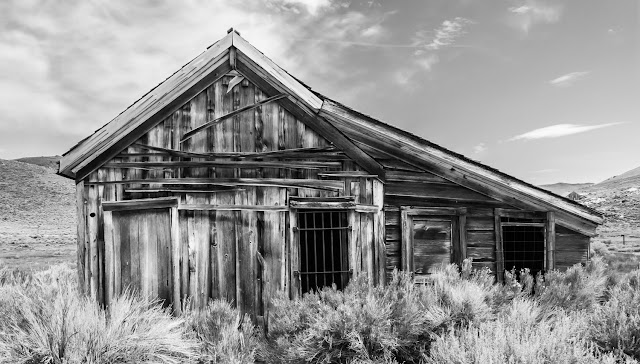 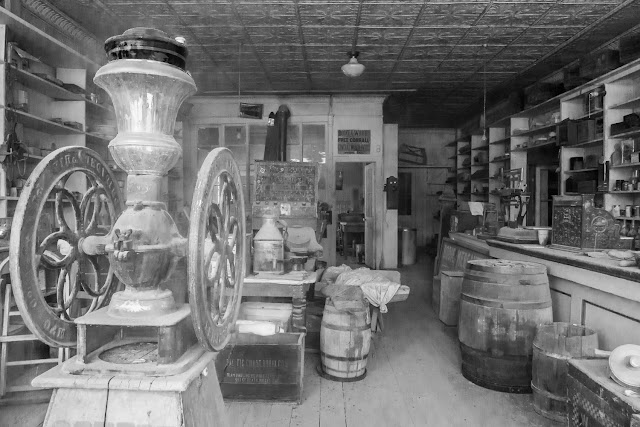 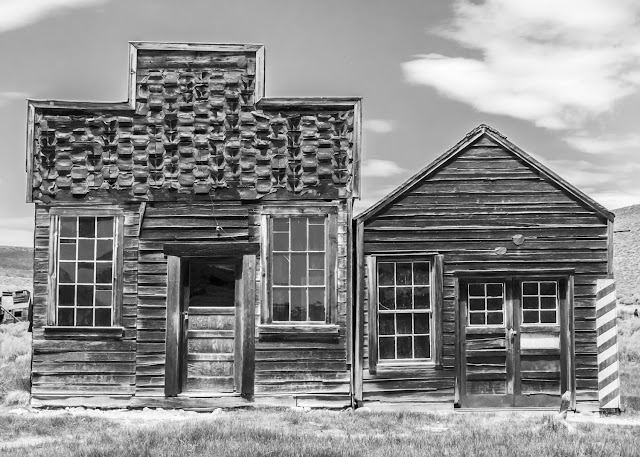 We toured a stamp mill, the last one of nine remaining. It was the processing facility that pulverized ore to particles as fine as sand. Inside this building were, among other machinery, 350-pound cylinders, called bosses, attached to the end of a long rod. The rods were lifted by cables powered by an engine, and dropped about twenty feet onto double-fist-sized rock, ninety times a minute, twenty hours a day. The noise must have been the stuff nightmares are made of. 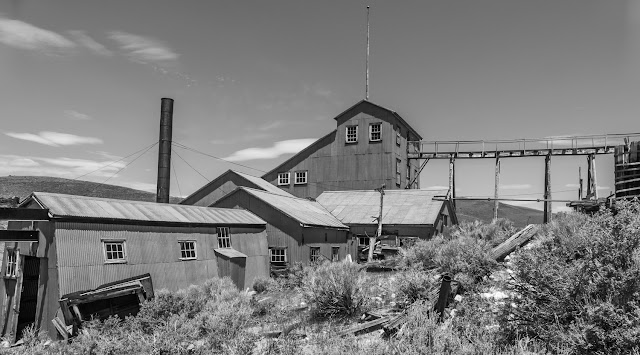 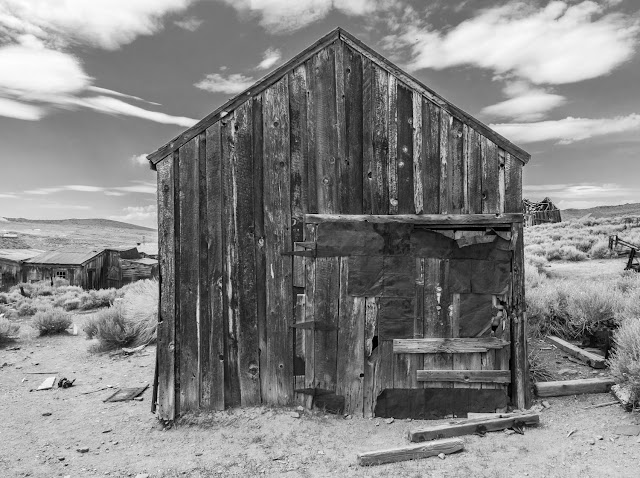 This didn't strike me as eerie until I uploaded it to the computer. Once I saw it on the bigger screen, I would not have been surprised to see a face in the shadows, just beyond the curtains, looking forward through time at me. 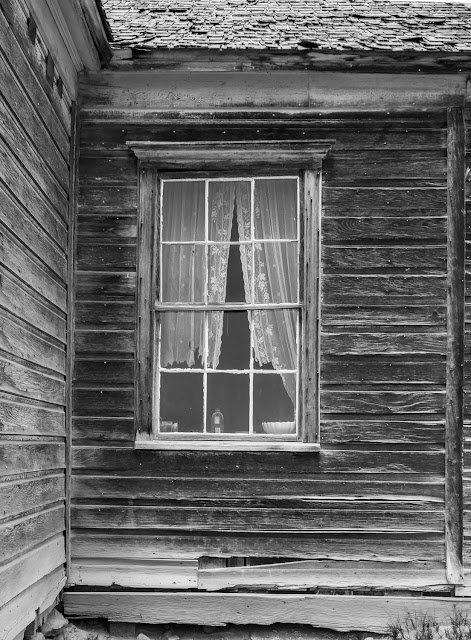 Two people I talked to asked if I'd been to Bodie before. When I told them no, they both said it's a place that calls you back, and you will return. I understand what they meant. It's a fascinating place, and every glimpse through a window is just one of many stories. It's not a museum or a curated presentation of what we think life was like; it's time and lives frozen in place. Yes, I'll be back.

Thought of the day:...a sea of sin, lashed by the tempests of lust and passion. - Reverend F.M. Warrington's take on Bodie, 1881