Last weekend my HH and I went to Bodie, the old mining town that's now a California state park on the National Register of Historic Places. To get there from where we're plugged in, we have to go through Yosemite, meaning we have to go through an entrance gate because we live outside the park. We got an early start last week so had no problem on the way over, and were pleasantly surprised to also not find a line a mile long when we returned, re-entering the park at the Tioga Pass entrance.

This weekend we decided to stay far, far away from the park. As the saying goes, we may be crazy but we're not stupid. For a couple of weeks there have been emails at work about heavy crowds expected for the July 4th weekend: come early, expect delays, lots of people, nowhere to park, assume misery. We took their advice and went to see some things in Fresno instead, in the complete opposite direction, but because I haven't loaded photos from that trip yet I'm exhuming a second round from Bodie.

I converted the photos I showed last time to black and white because the monochrome lent an age-old feel to the buildings and landscape; it gave me the atmosphere of unchanged time that was important to my interpretation of the place. I left several in color though because conversion removed, rather than added, character. Herewith I present them, but first, a black and white of Mono Lake,

and a shepherd, his dog, and his flock. I have never seen this before in my life. This was on the road over Tioga Pass. We noticed green, green fields that looked cropped or mowed to the ground, and soon saw the reason. I'm sure the shepherd thought I was off my rocker - he saw me aim the camera and waved - but I thought, This is a scene that I would expect out of Basque country. It seemed as exotic to me as it was mundane to him.

HH was looking over my shoulder as I was writing this and saw this photo. He said he saw a sign somewhere that said these actually are Basque sheepherders. I went on a hunt just now to find documentation for that, and found that Peruvian sheepherders are also used.

I also found out that in 1869 John Muir was hired to shepherd a flock from Yosemite Valley to Tuolomne Meadows for $30 a month, which "suited him fine." After one season of seeing the devastation the grazing sheep left behind, he became a fierce critic of what he called "hoofed locusts." Grazing is no longer allowed in the park; this area is on National Forest land. 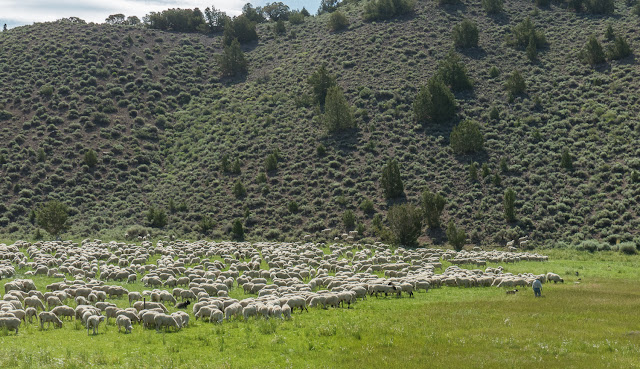 Now, on to Bodie in living color.

I wonder how much credit can be given the doors for holding up this wall. 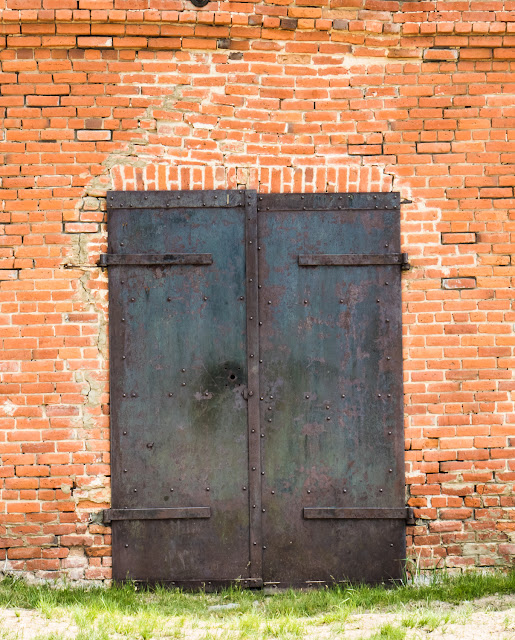 Siding made entirely out of metal strips. 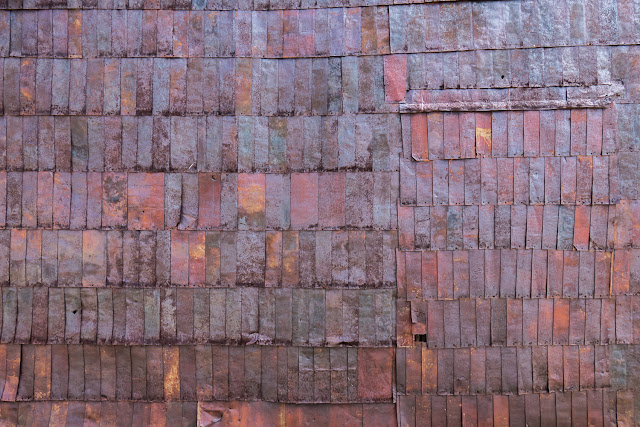 Two views of the same thing. I couldn't decide which to show. 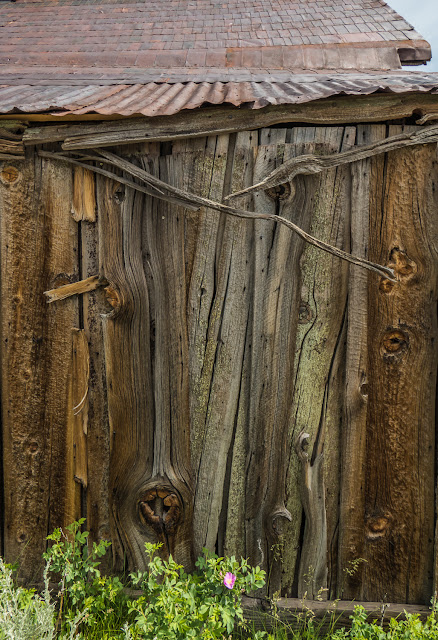 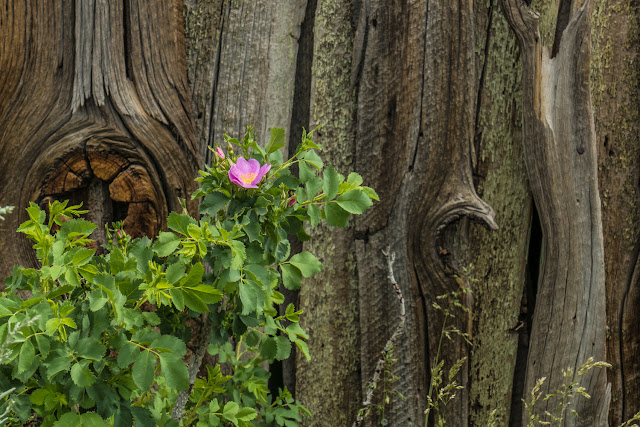 I love old hardware and commonly find unusual assemblies in cemeteries. When I saw this latch, mounted in the middle of a door, I thought it was new, but look at the worn edge of the wood above it. This is an old 'un. ...although it's not obvious how it works: there's no room to move in either direction. 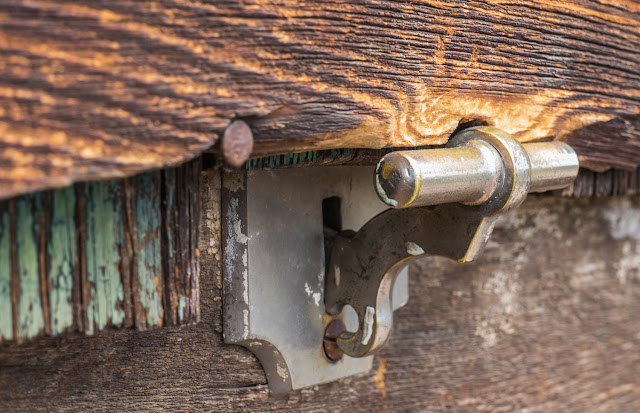 A wood-burl door knob that's on the same door as the latch above. 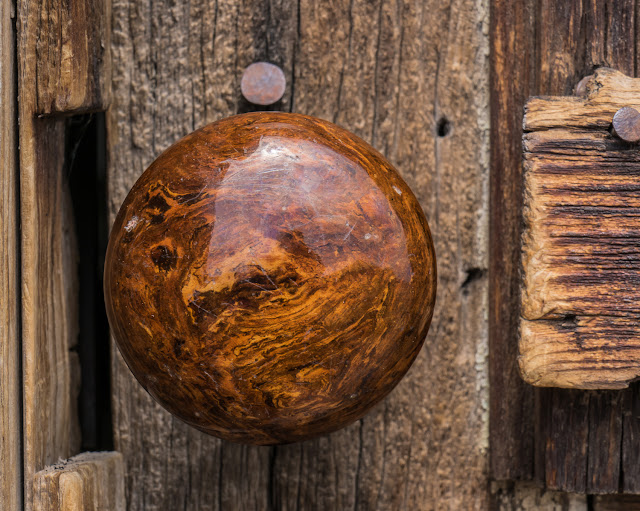 What a treat it was to find this siding, apparently made from embossed ceiling panels, hidden in an alcove at the back of a house. 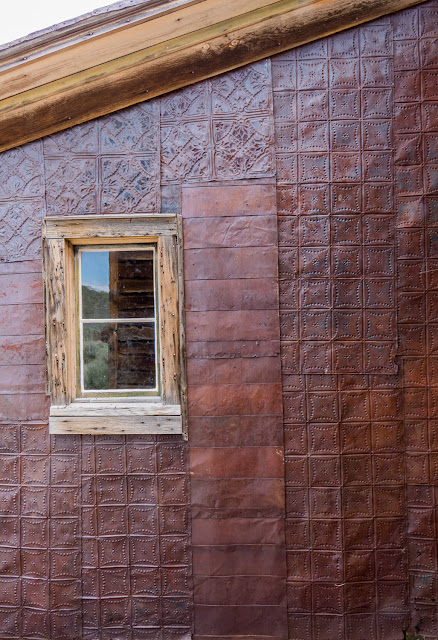 It's a Hollywood product. What better endorsement is there? 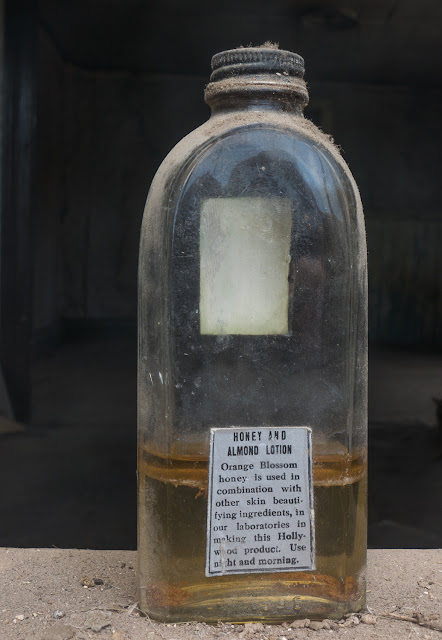 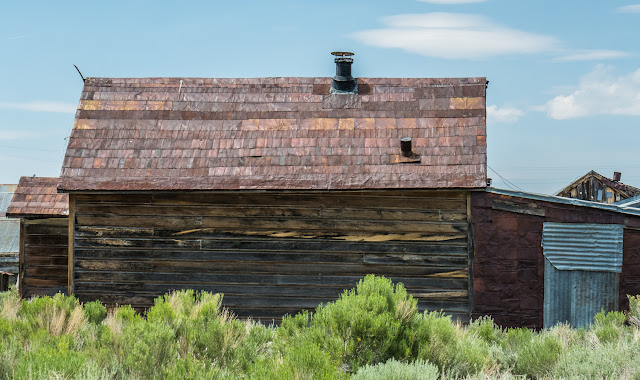 All that remains of the bank. The rest of the building may have crumbled, but no one is getting through the door. 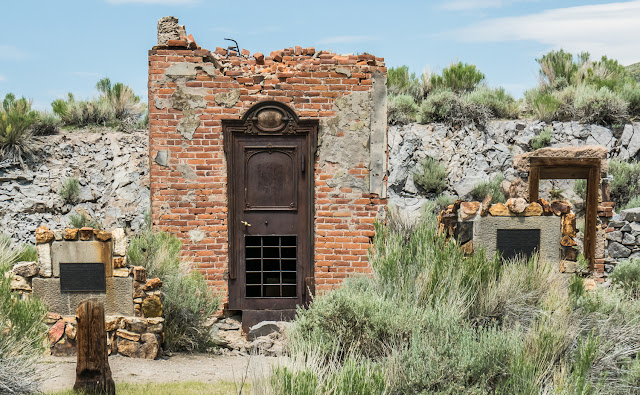 The bank's safe, made by Hall's Safe and Lock Company. This is seen through the bars at the bottom of the door above. 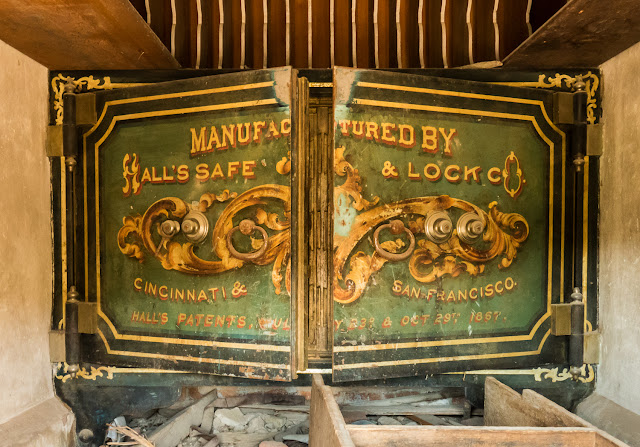 Up the hill from the town is the last of nine stamp mills that pulverized ore into sand. This water tank is next to the mill. 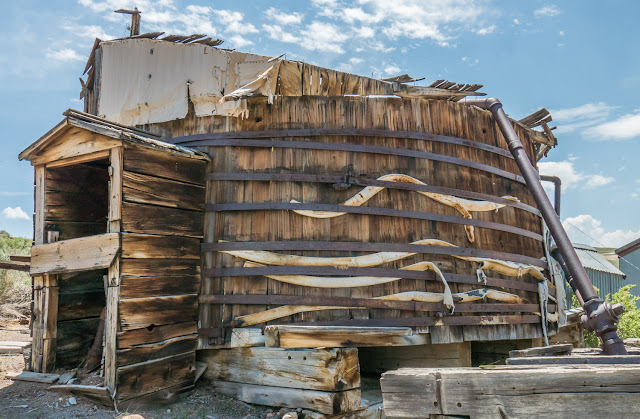 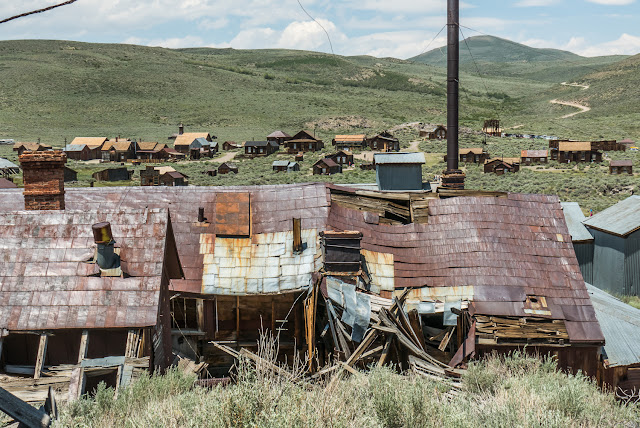 One of the crushers with five bosses waiting for power and ore to work again. The 350-pound bosses dropped 90 times a minute, twenty hours a day. I feel insanity coming on. 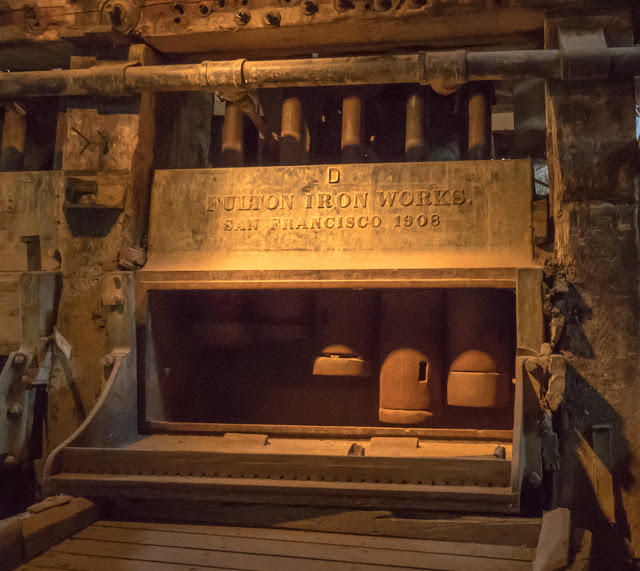 A watercolor scene through a mill window. 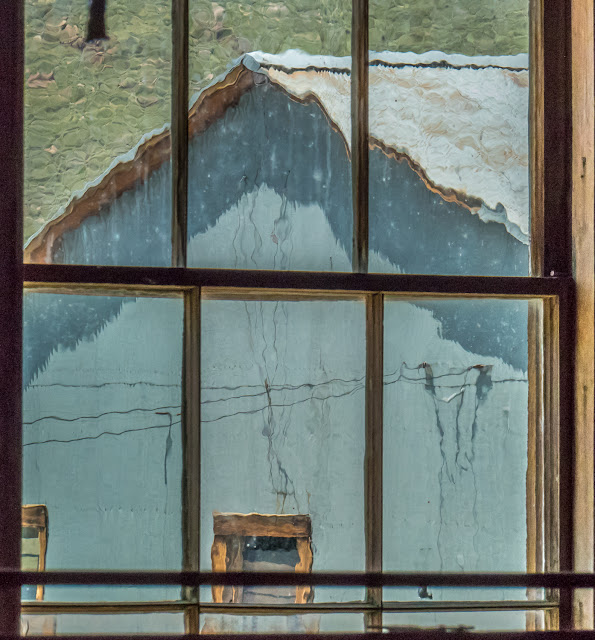 Valiant flag irises bloom before...what? What building was this? There's not enough left to say. 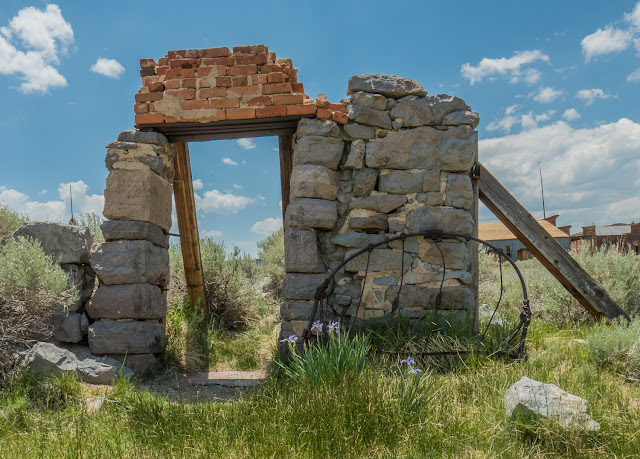 I've been trolling the internet, looking at other people's photos of Bodie, and have discovered a couple of things: lots of folks take show-stopping photos of the place, and I saw just a fraction of what there was to see. We really do need to go back.