Listening to the ancients

While a GPS can talk you to an unknown destination, there's nothing like a good map to give you ideas about where to go in the first place. I like unfolding one onto the table or opening the atlas and scanning the route ahead, looking for red-lettered names of attractions of one kind or another. I compare it to browsing the shelves at the library or paging through a newspaper as opposed to hoping a title online will leap off the page and shout, Read me!

So it was with the Ancient Bristlecone Pine Forest near - kind of - Bishop, California. Just about a year ago I went to Cedar Breaks National Monument in Utah and saw some bristlecones there. They're the oldest living thing on the planet, as much as 5,000 or so years old, and while I don't know the statistics, I can't imagine they're thick on the ground anywhere. So when I saw the forest's red letters on the map and we were going in that direction anyway, we decided to make the drive about 20 miles off the highway on a road designed to induce carsickness.

As gross physical specimens, bristlecone pines aren't strong in the beauty department. One of their methods of adaptation to harsh growing conditions is allowing parts of themselves to die off in order to conserve energy for the plant as a whole. The result is a motley collection of dead and living wood. 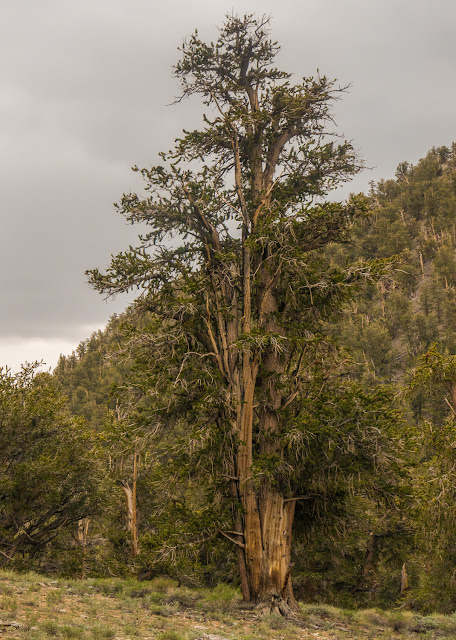 Even the living parts can't be described as robust. 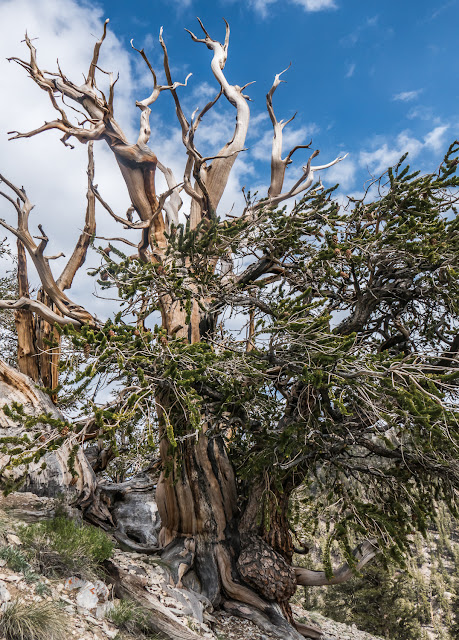 Where their beauty comes into focus is in the details.

Every year the trees add growth just under the bark. When it's dry the rings are narrow, while adequate rain is indicated by wider rings. Even so, their slow growth means that some trees have one hundred years of growth compacted into a one inch space of rings. 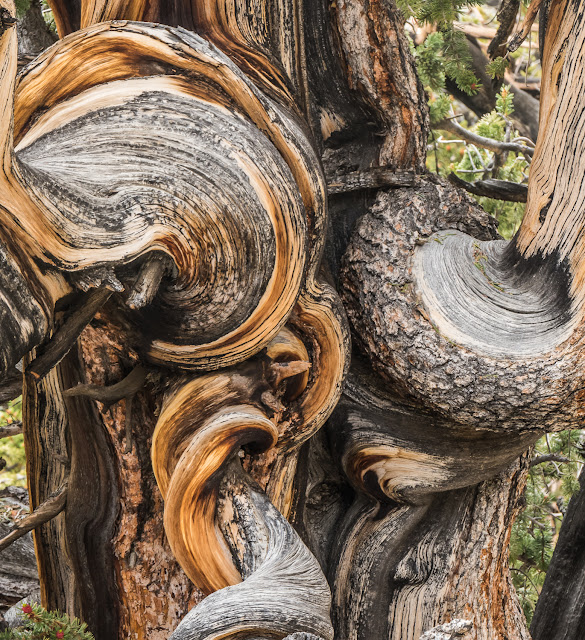 The key to their longevity is cold, high-elevation growing conditions. The trees at Cedar Breaks thrive at 11,500 feet; these trees are at about 8,000 feet. Under those conditions, insects aren't much of a pest and the slow growth means they produce tiny amounts of resinous, hard wood. I remember a ranger from Cedar Breaks saying that a three-foot sapling is probably 200 years old. More water and warmer temperatures could result in taller, larger pines, but they wouldn't be as hardy. 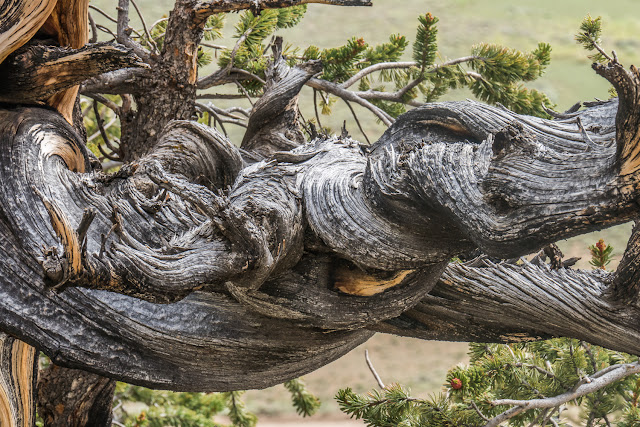 The oldest trees are in the mountains of eastern California, but there are widely scattered groves throughout the high mountain areas of Nevada and Utah. This wood is what's left of a 3,200 year old tree that died in about 1676. 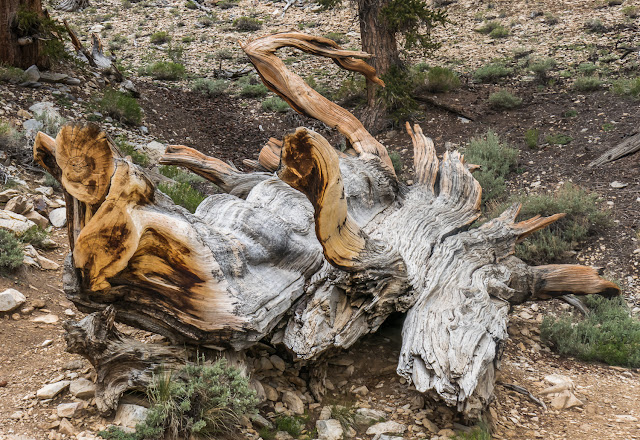 Bristlecone needles are in a distinctive five-needle cluster. 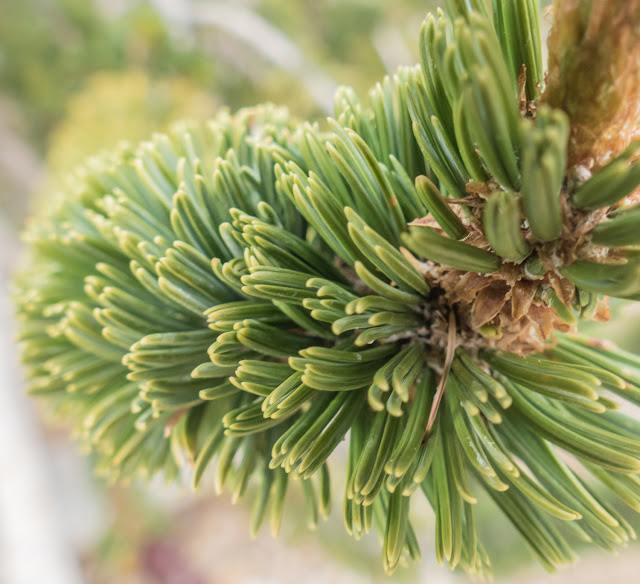 I walked a short trail to the area with the oldest trees. In 1953, the man who discovered them was taking core samples nearby when he wandered to this spot. He took a sample from one of them and went back to camp for the night, where he started counting rings. He counted back to beyond 2046 BC, making the tree he had just found more than 4,000 years old. There is one in the White Mountains of California, the Methuselah tree, that is over 5,000 years old. Its location is kept secret.

Here is one last living sculpture from the Ancient Bristlecone Pine Forest. 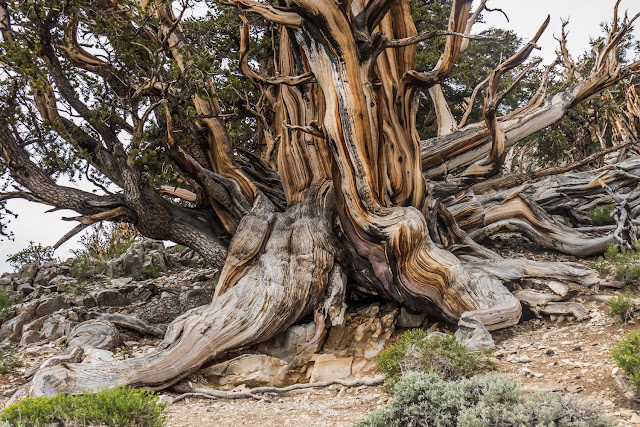 When I started on the trail it was overcast and spitting rain, but on my way back the sun broke through. 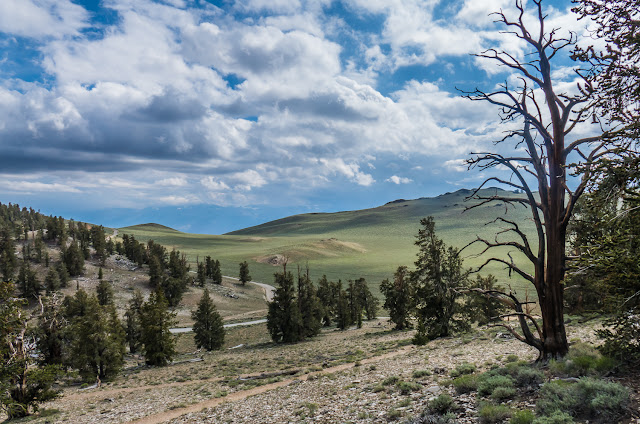 And this is why they're called bristlecones. 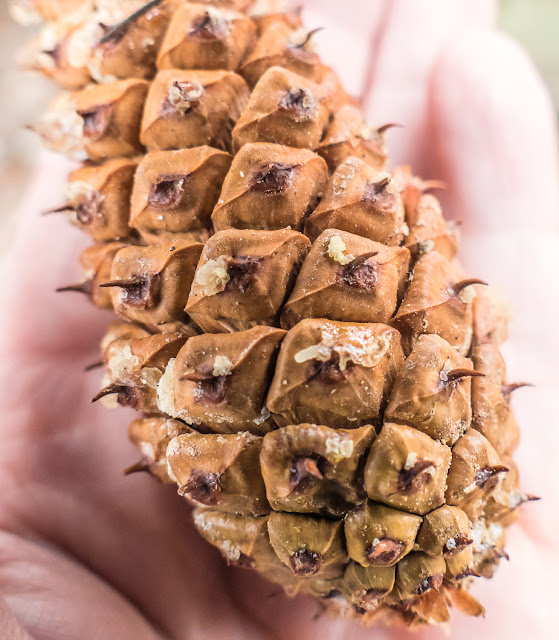 I can only imagine the extent of the excitement and wonder at the discovery in 1953, but am sure I felt some part of it while I was on that trail and laid my hand against the ancient tree next to me. I closed my eyes, breathed, and listened, thinking of the ages it had lived through and the storms it had weathered. It was an uncommon, unexpected physical connection with time.

Dwell on the beauty of life. Watch the stars, and see yourself running with them. - Marcus Aurelius, Meditations
at 6:18 PM