Since going off the road just about a year ago, life has been pretty different. I sold my truck and trailer because the truck payment was a lot of money, and what's the use of a trailer without a truck to pull it with? I, however, admit to a continuing case of wanderlust. After replacing the truck with a cute little Ford Focus, though... 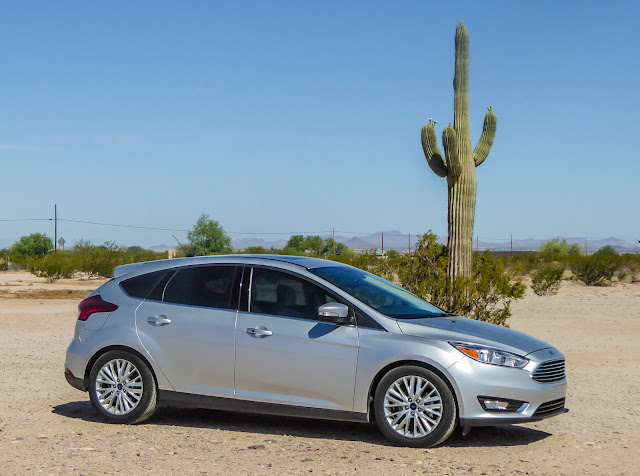 ....which will not tow a thing, any domestic traveling we do is going to be via the motel route. Having once had a paid-for trailer, the thought of the cost of staying in motels and eating out is daunting, but putting it in perspective by thinking how much the trailer and truck cost, not to mention diesel fuel at 11 miles to the gallon, maybe not so bad after all. Even so, last Sunday, to dampen the wanderlust a bit, we took the opportunity to do some world traveling via a synchronized swimming show put on by the Aquabelles of Green Valley Recreation (GVR).

GVR is an organization that has several centers around Green Valley with pools, tennis and pickle ball courts, and fitness facilities, plus silversmithing, woodworking, ceramics, and clay studios, an art league, and clubs like mad including computers, photography, quilting, different states of members' origins, cards - actually, just name it and it's bound to exist. Membership attaches to a property's deed, which means if your home's prior owner joined GVR, you have no choice when you buy the place; you have to join too. My house was already in GVR which was ok because I wanted use of the facilities, but it's not cheap. It's about $2300 to join and annual dues are $450. However, I use the well-equipped fitness center almost daily and I couldn't join a commercial place for anywhere near my annual fee. Plus the art league with studio space and many free workshops... but I digress.

The Aquabelles are one of the clubs here and they put on an annual show that's open to the community; this year's was the 51st. The members pay for their own equipment, props, and decorations for the show but pass the hat for a local charity. This year any donations they receive are going to DaZee's, a local shelter for victims of domestic abuse and sex trafficking. I had heard of DaZee's but did not know it was a fund-raising forum for a shelter. This is only one of many organizations that raises funds for local charities in Green Valley.

I  was not in Green Valley last year at this time, so this is the first time HH and I, and our friend Kathy down the street, went to a performance. We had a blast. The theme of this year's show was Around the World in Eighty Minutes, so here's where my virtual traveling comes in.

This is the pool we look out on when we're in the fitness center, and was the venue for the three shows put on this weekend, with the Santa Rita mountains in the distance.

I admire these women no end. They're a lesson in enjoying life to the fullest; just get out there and have fun. This is their opening dance for the New York stop on their tour. The woman on the right? I want the muscles on her back. 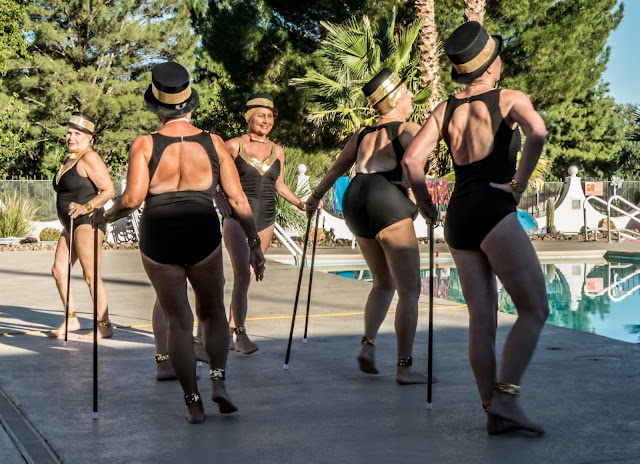 Here they are in the pool at the beginning of their act, 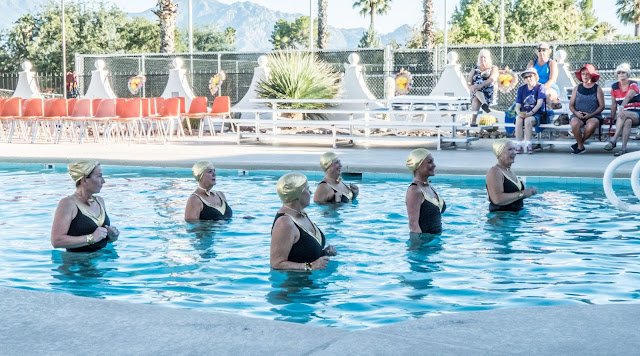 and some waving-leg work. The emcee for the show mentioned the synchronized swimming performances at the recent Olympics, and added, "That's not us." But I couldn't do what these women do and thought they were wonderful. 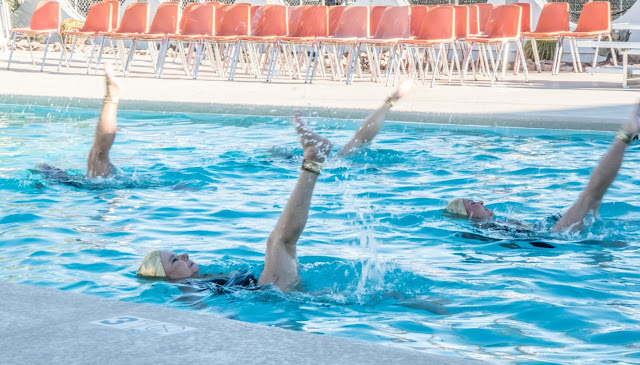 Next up was a stop in England, with a performance by the AquaBeaus. They were a riot. Look at the last guy in line. How could you not laugh along out of sheer delight? 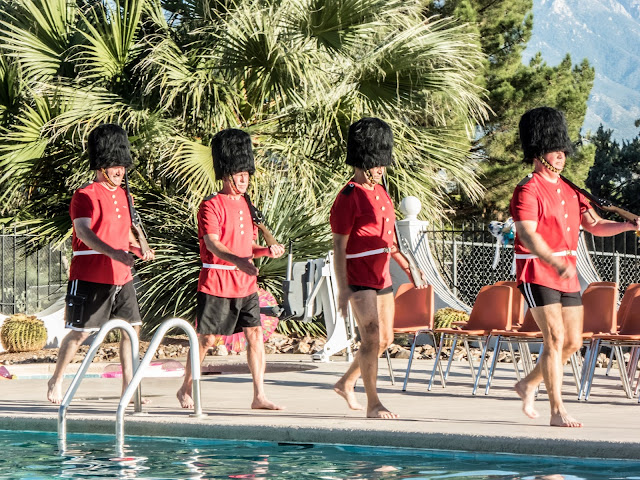 I think they maybe rehearsed for about 15 minutes but were obviously having fun. 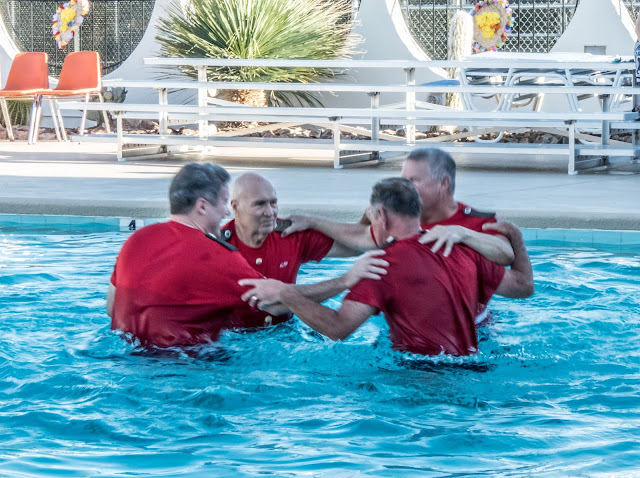 Here they're performing their version of whatever the movement is called where each swimmer dives off to alternate sides. They just kind of fell over.

Next up was a trip to the Caribbean. 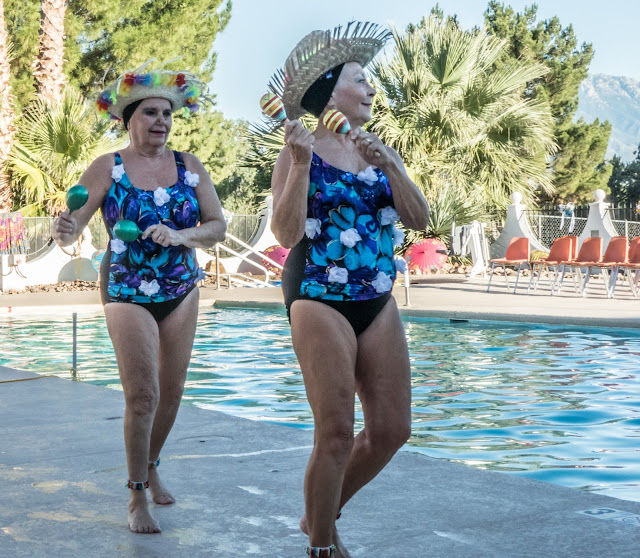 This might be the opening to the Italy segment. 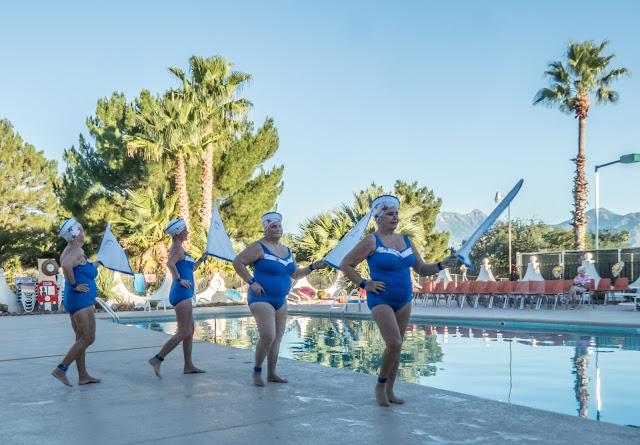 This one is definitely Istanbul. 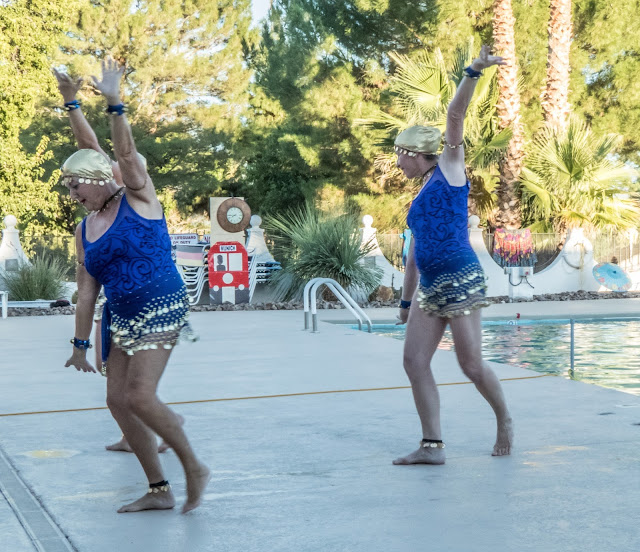 Here are their jangly ankle bracelets peeking above the water. 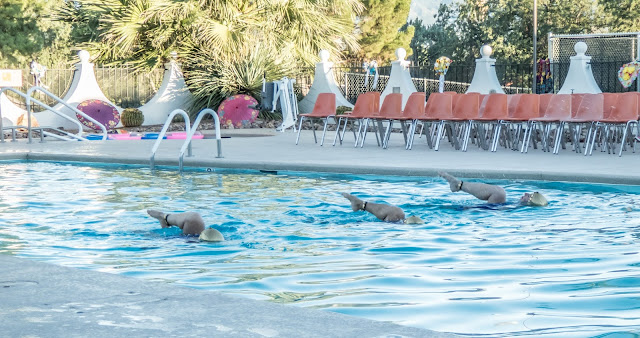 Zandra Pardi is a native of Mexico who now lives north of the border. She teaches Spanish classes via GVR and dances at functions like this one. HH and I first saw her at a Green Valley Concert Band's performance last spring. 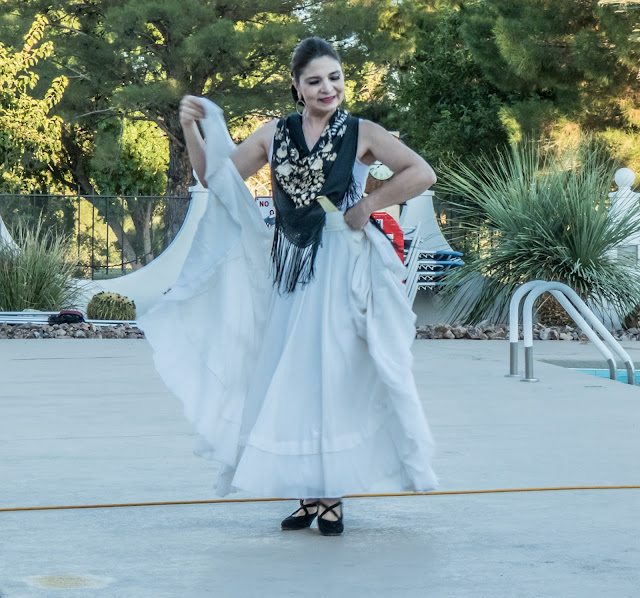 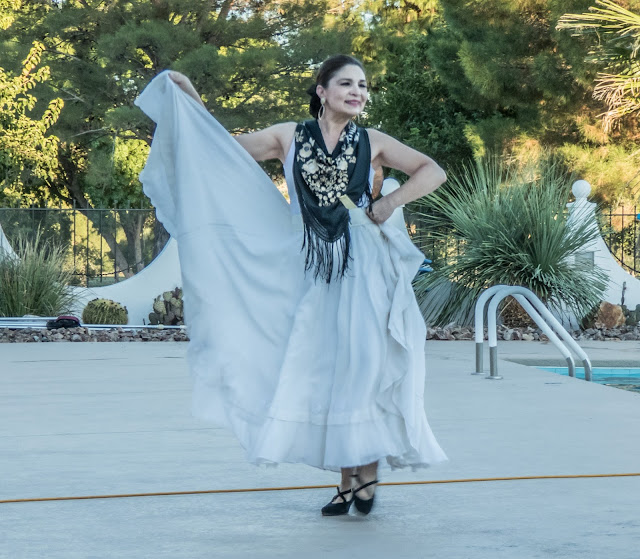 I wrote to Zandra a few weeks ago about private Spanish lessons and from what I could decipher from her reply in Spanish, it sounded like she was too busy to take on anything else. After the show ended, though, I introduced myself to her and said I was the one who had asked about lessons, en español. She actually understood what I said and didn't laugh - bless her heart - and said she thought she'd have time on Fridays. I'm so excited and hope to start with her next month. 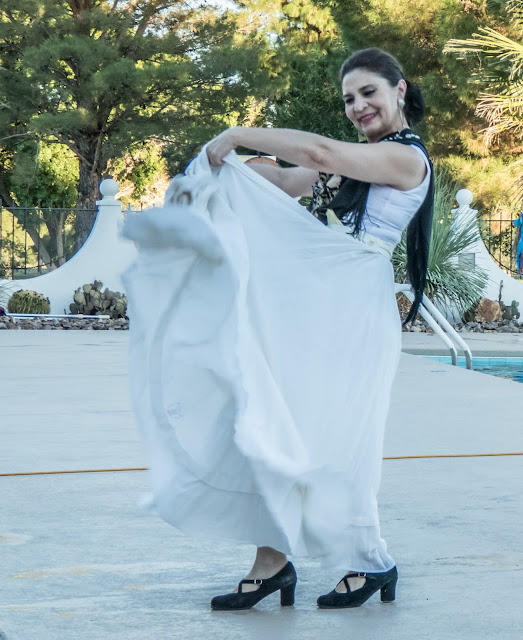 This is the last performance of the day and I lost track of what city it represented. There were other places they traveled, too, but I don't have photos of those. 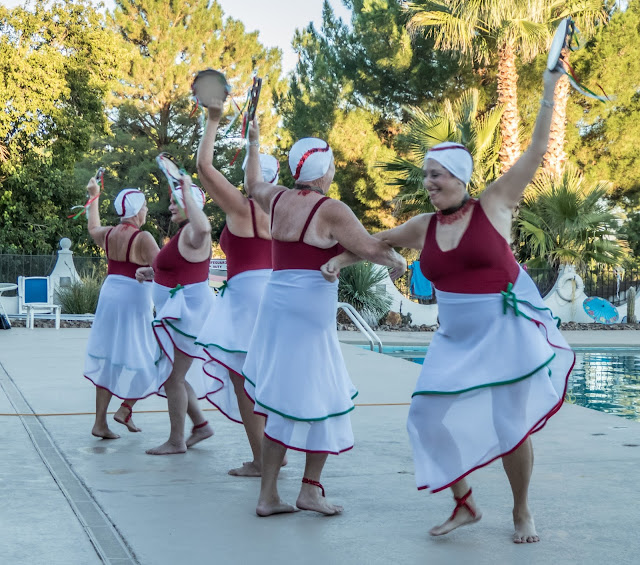 The ensemble, in their wet and drying finery. We've already earmarked even better seats for next year's show.

When was the last time you did something for the first time?
– John C. Maxwell