Many years ago, about 30, I was visiting family in Detroit, and one night we went to dinner at a Mexican restaurant called Xochimilco. I remember it being on Jefferson at the foot of the Belle Isle bridge but a search for it just now says it's in Mexican Town, a few miles to the northwest (I think). That's what memory will do for you: not much. Anyway, I had no idea what the restaurant's name meant at the time and for years afterward, but last year I learned it's the name of a borough of Mexico City known for its canals and artificial islands. I read about it in a guide book and decided we had to go there when we traveled to Mexico City last December.

HH and I hired a taxi to take us all around the city. There's public transportation but we're lazy travelers and the taxi was so convenient. The driver was bilingual and helped me with Spanish quite a bit. He needed very little help with English; mostly it was help with pronunciation. He was quite fluent. One day we had him take us to the canals of Xochimilco for a gondola (trajinera) ride. It was a beautiful, sun-shiny day and the crowds were out, so there were lines to board one of them. This doesn't look like many people, but there were queues like them in several places. 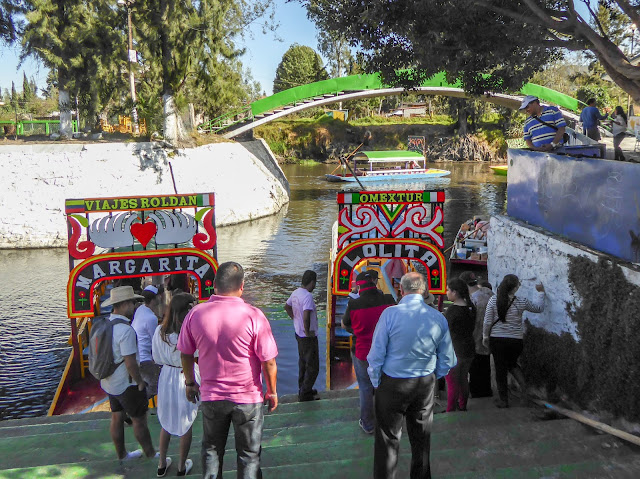 The canal was full of occupied trajineras, so it looked like it would be a long wait.

Luckily our driver knew a way to cut the line and got us on a boat of our own. 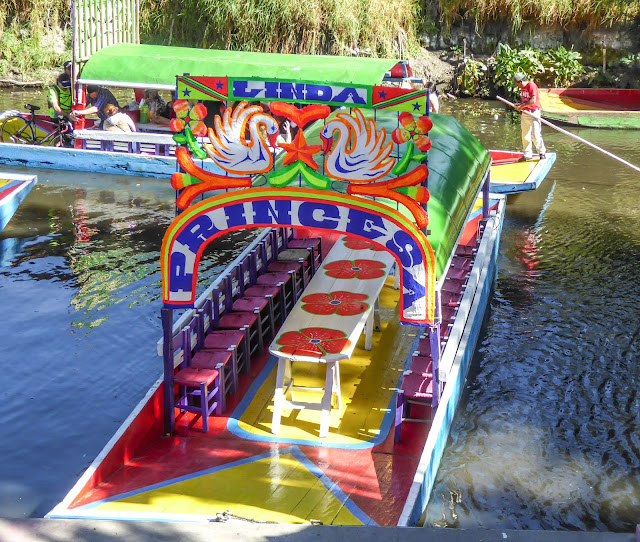 This has to be a hard way to make a living. There are no motors, just long poles used to move the boats along. 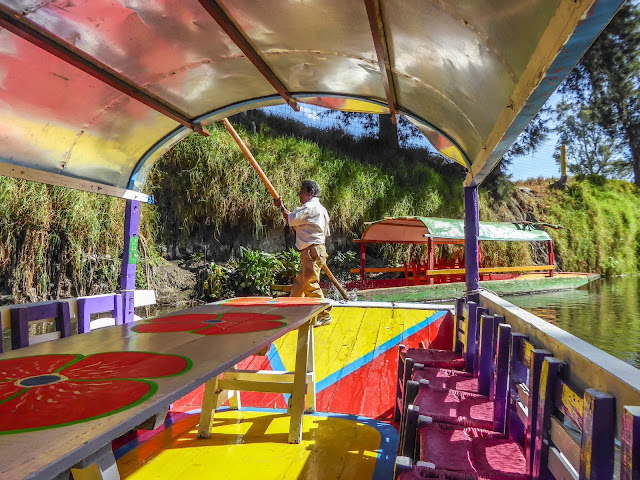 Many people come with their families and spend the entire day on a trajinera, bringing their own food and drinks. We may have been the only gringos out there that day, but that was also true for just about everywhere we went. Museums, cultural sites, restaurants, markets, churches - Mexico City and the surrounding areas are a magnet for Mexican tourists. They love their country. On the other hand, America, and other countries for all I know, have done a great job of instilling fear about the dangers of traveling in Mexico, but I believe I have a better chance of getting shot in south Tucson than anywhere I've been in Mexico. 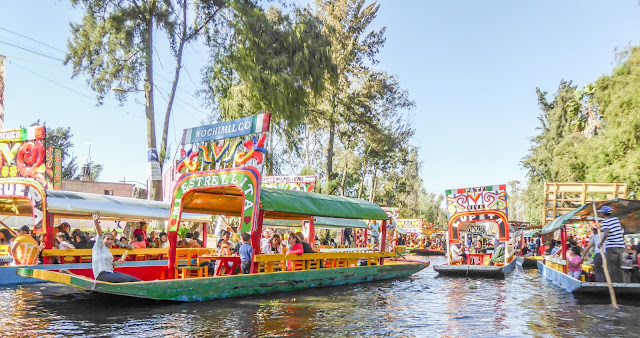 Passengers can buy from vendors on chalupas, a kind of canoe, who get around the same way, using poles. Food, drinks, and souvenirs are all for sale. 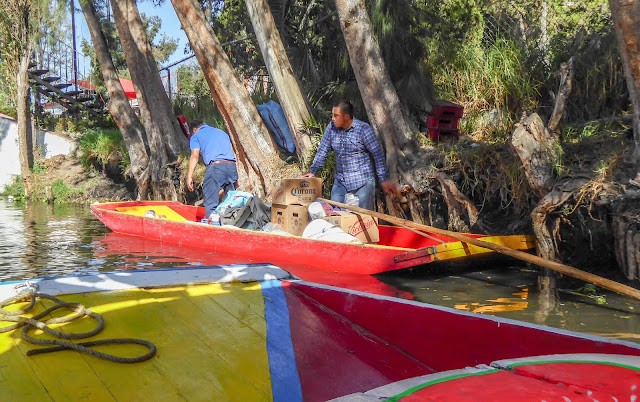 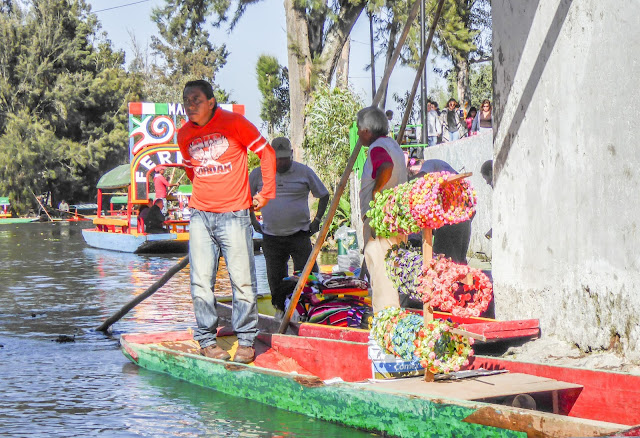 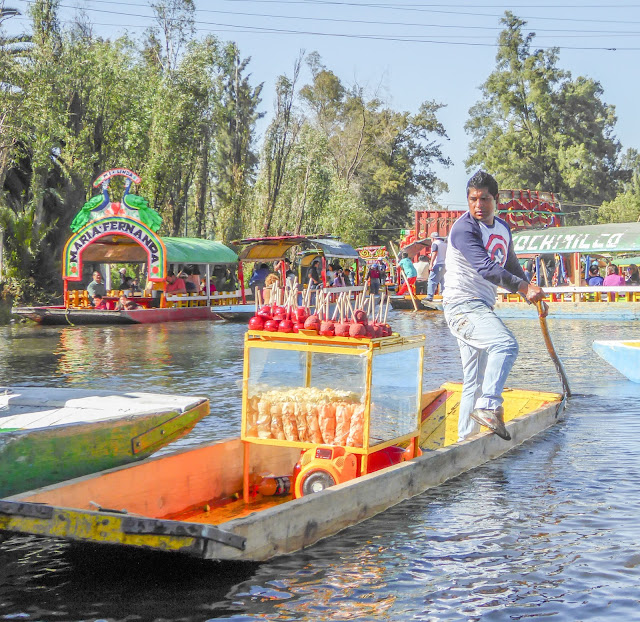 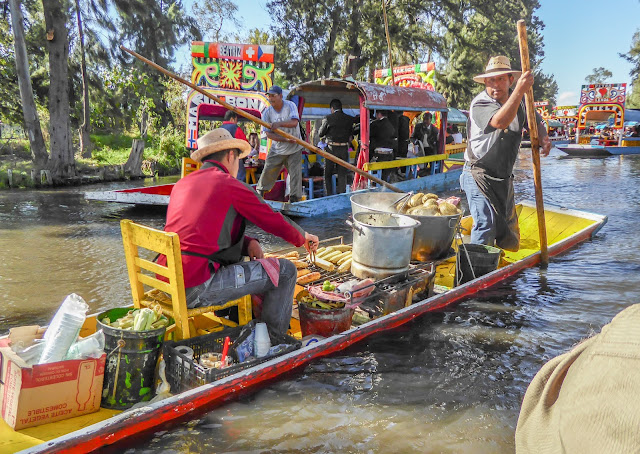 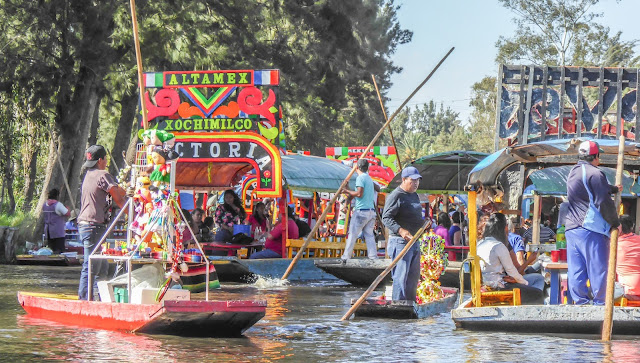 Some people bring their own music in the form of boom boxes, but you can also hire mariachis, who travel around the canals, offering their services. Just flag them down and their trajinera will pull alongside for a serenade. 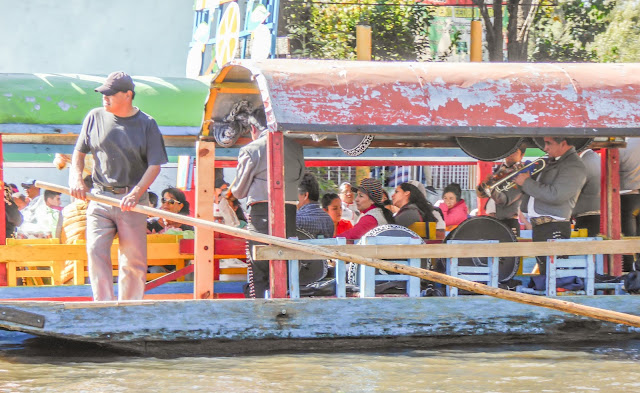 Here are two trajineras, nose to nose, sharing a mariachi band. It looks like the woman at the far right is protecting her hearing - they're loud! 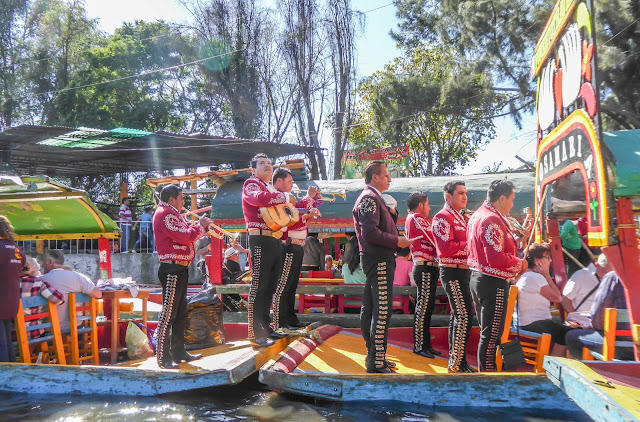 There's a place there called Isla de las Munecas - The Island of the Dolls. Legend has it a girl drowned under mysterious circumstances and the dolls are possessed by her spirit. I've seen some creepy photos of dolls on the island, particularly in shots taken at night, but all I saw were some raggedy-looking toys hanging from trees and bushes. 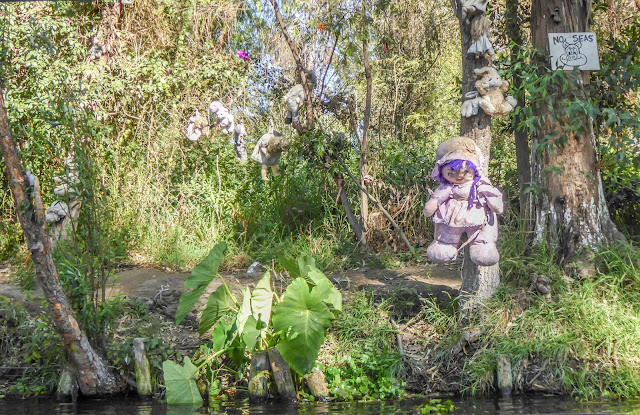 I imagine that at night things look different indeed. It's possible to get off the boat and explore but, no. I could live without that experience. 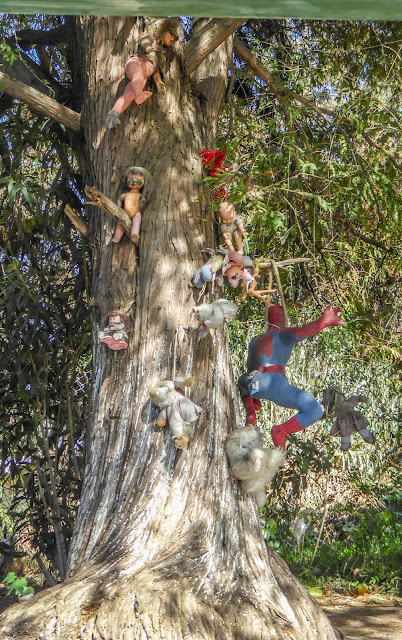 As crowded as the canals were, there were still times when we found ourselves nearly alone. It was easy to imagine an earlier time, before it got so commercial, when the boats were used to transport produce from the gardens on the islands to markets in the city, when in early morning all was quiet except for the sounds of water lapping the shore and sides of the boats... 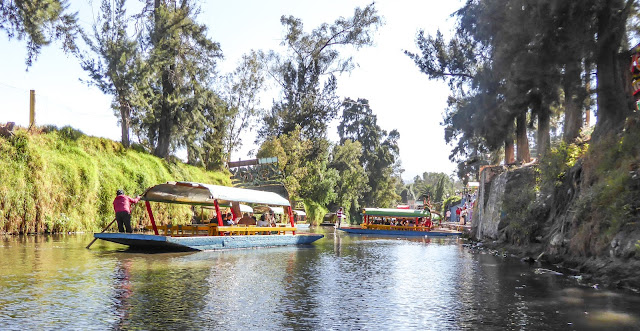 ...and then, BOOM, there we were back in the fray, cheek and jowl with the rest of the folks looking for entertainment. It was OK, it was good. It was Mexico and this is what we came for - the sights, the music, the people - the experience of daily life in this marvelous city. 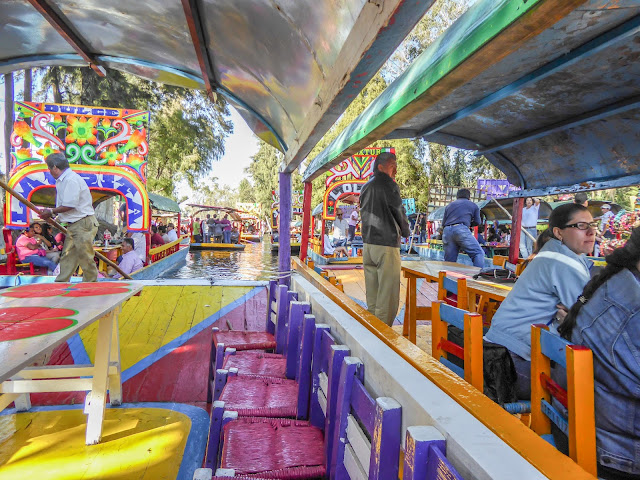 The true secret of happiness lies in taking a genuine interest in all the details of daily life. - William Morris