One of the most accessible, and therefore busiest, places to hike is Golden Canyon. Combine that with a holiday weekend, and a free-entrance weekend, and the result is a packed trail.

I got to the trailhead at 7:30 one morning last weekend to find nine vehicles in the parking lot already. By the time I came out a couple of hours later, every spot was filled, the perimeter of the lot was solid with cars, and the road was lined in both directions.

When I saw a group hanging around their vehicles, suiting up as for a trek into the Outback, I threw on my backpack, slung the camera around my neck, and set out to get at least a couple of views without people... but just after the shot below, the camera began shutting off as soon as I pressed the shutter release. The malfunction was due to operator error and I spent a lot of time trying to get it to work. It wasn't until I was at the end of the canyon that I figured out the problem and was mad and frustrated all the way in. However, a good way to look at it is that I will never make that mistake again. 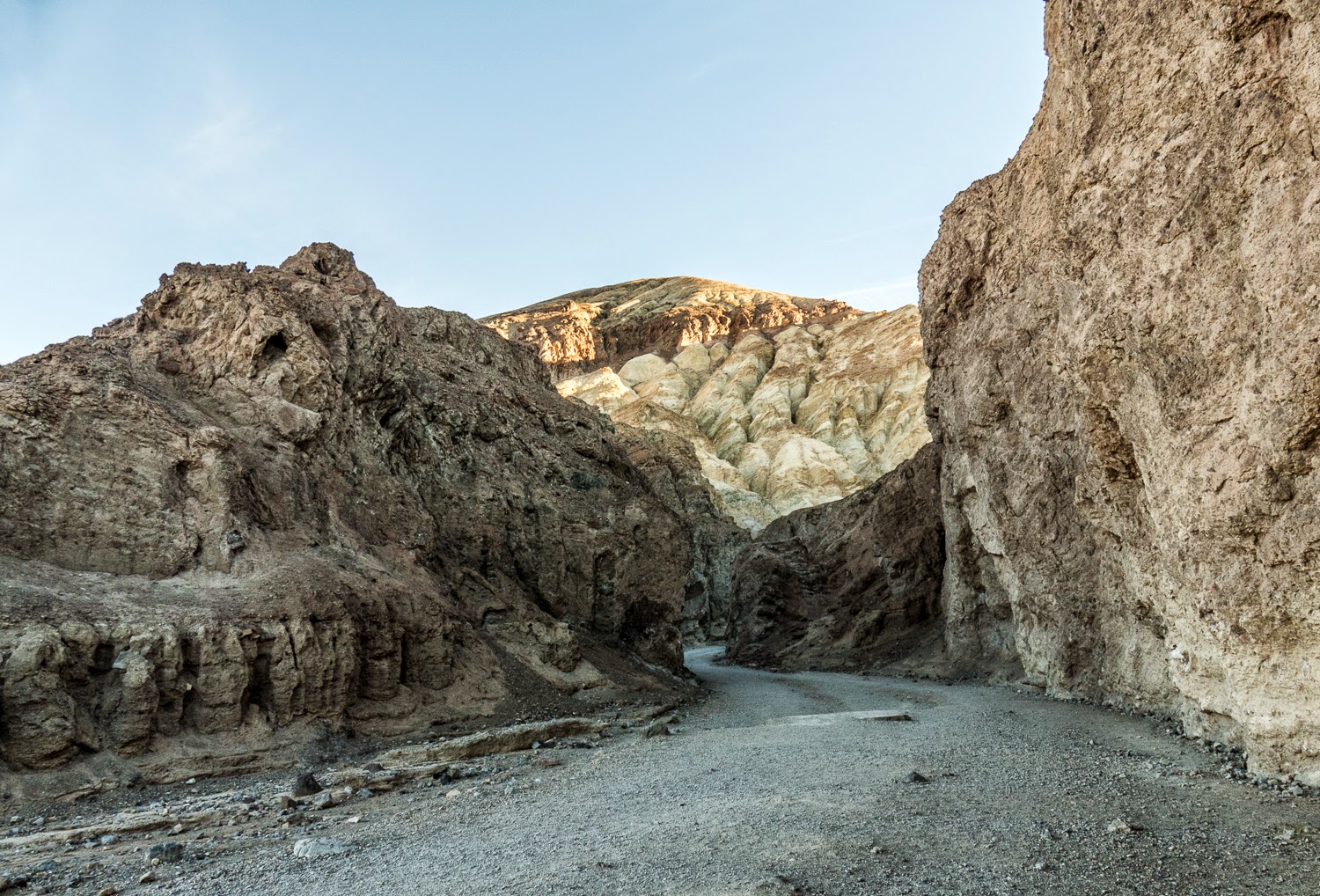 Red Cathedral is a formation at the far end of the canyon that's visible from the trail almost from the start. It's easy to understand how it earned its name. This was my destination. 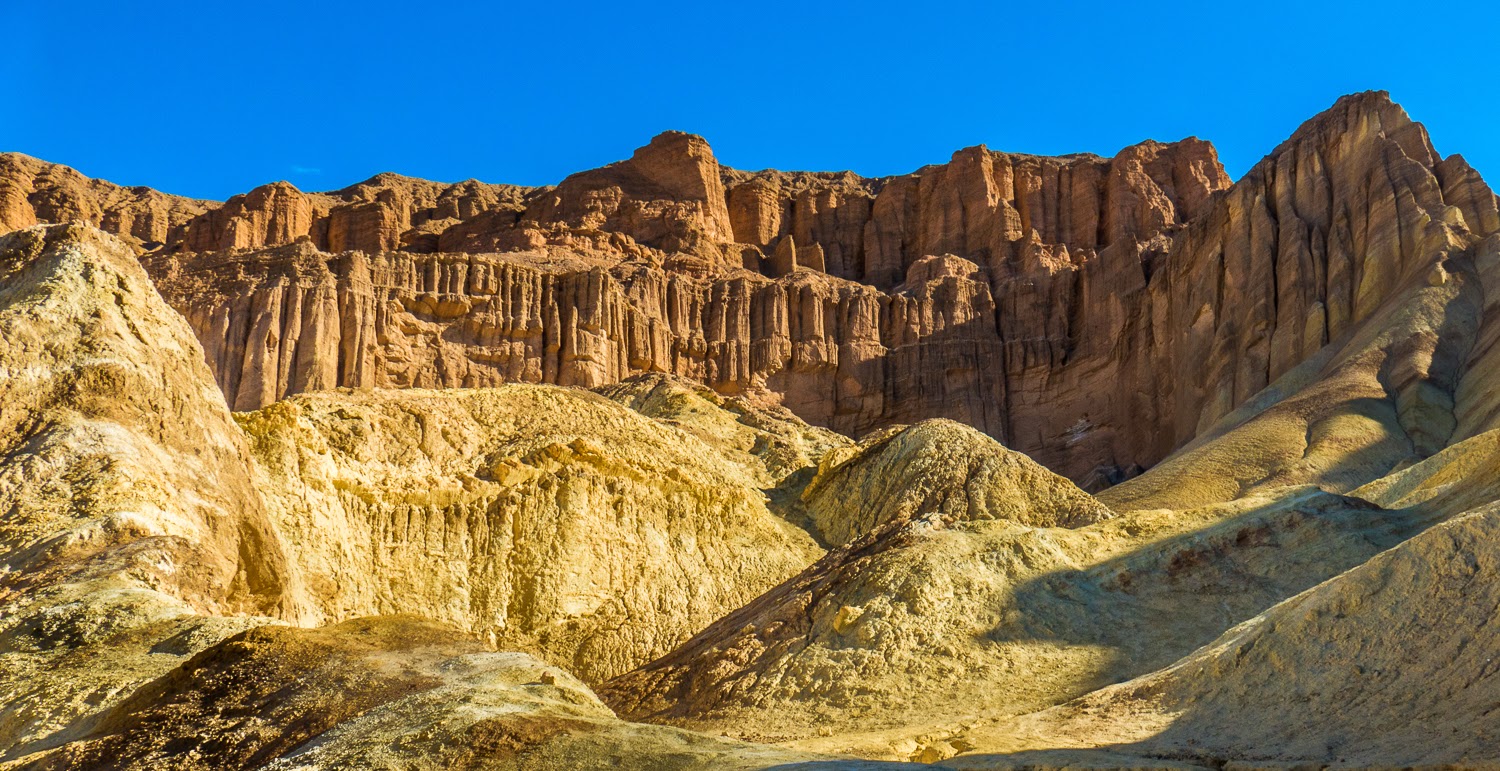 The trail looks like it ends when it reaches Red Cathedral's base, but being willing to keep climbing an incline over rocky terrain, continuing to the right of the darker outcrop below... 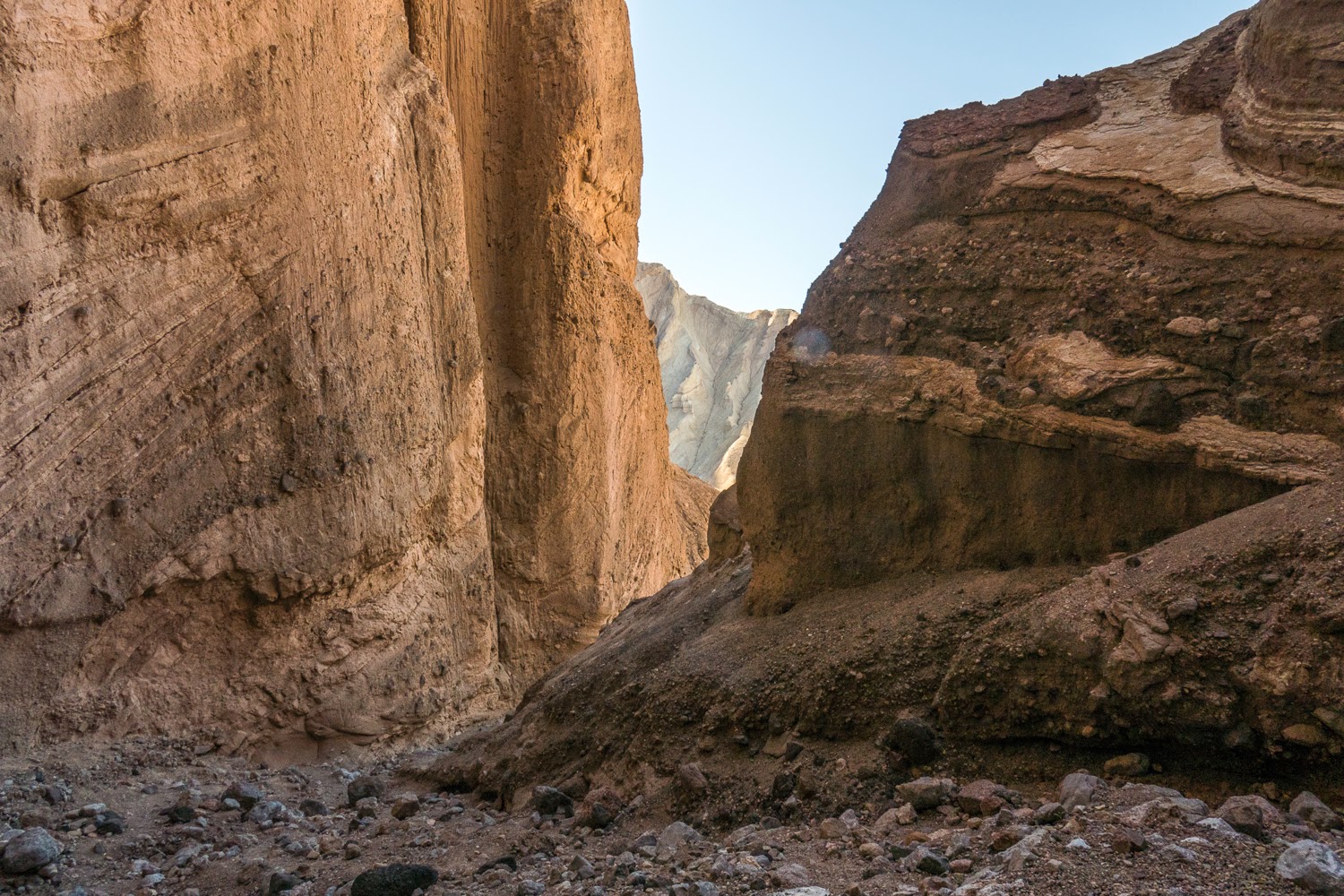 yields this reward. The trail continued even higher but this was my limit. The gray formation in the distance is so pretty it deserves a closeup. 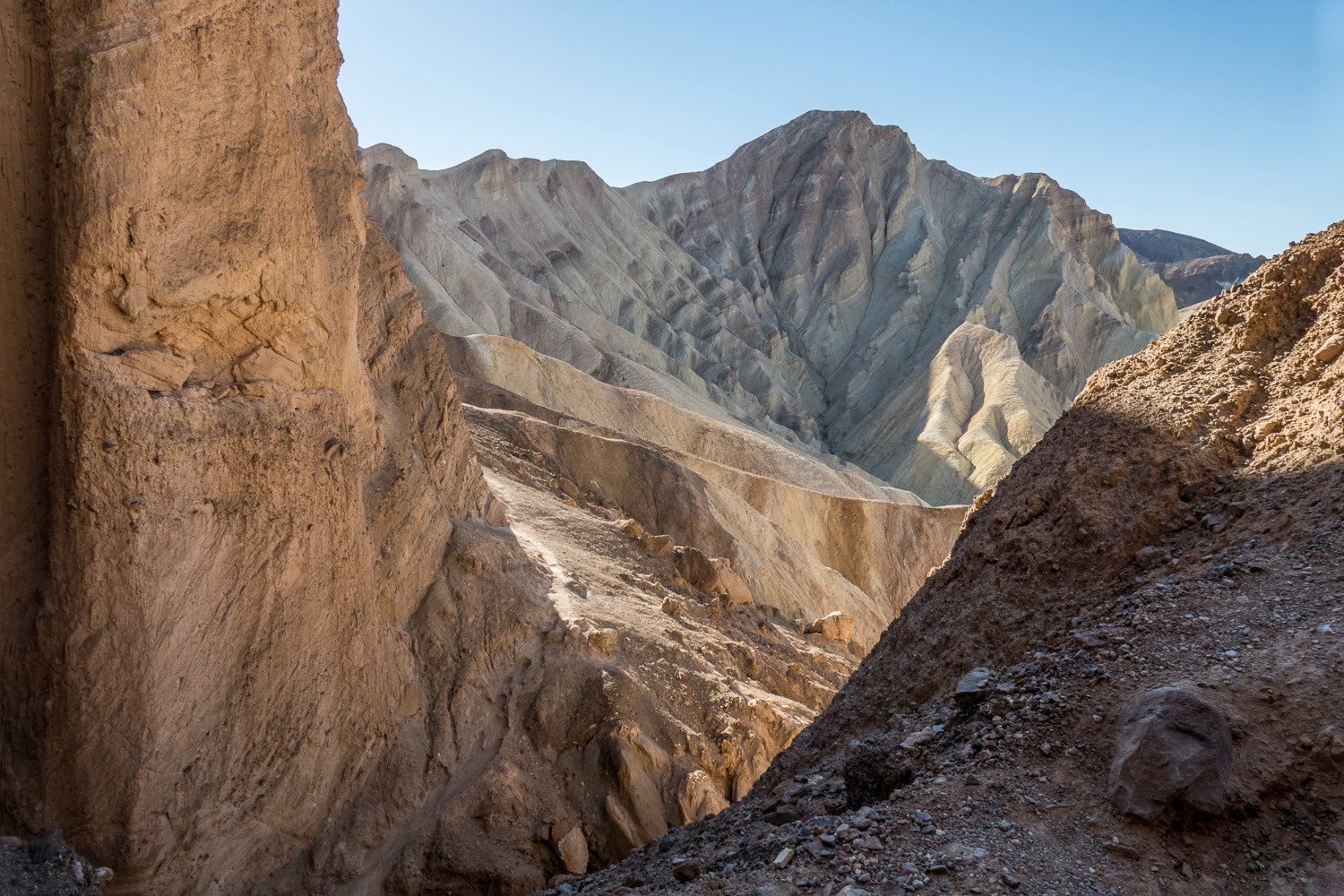 Its graceful, fluted curves are just lovely, don't you think? 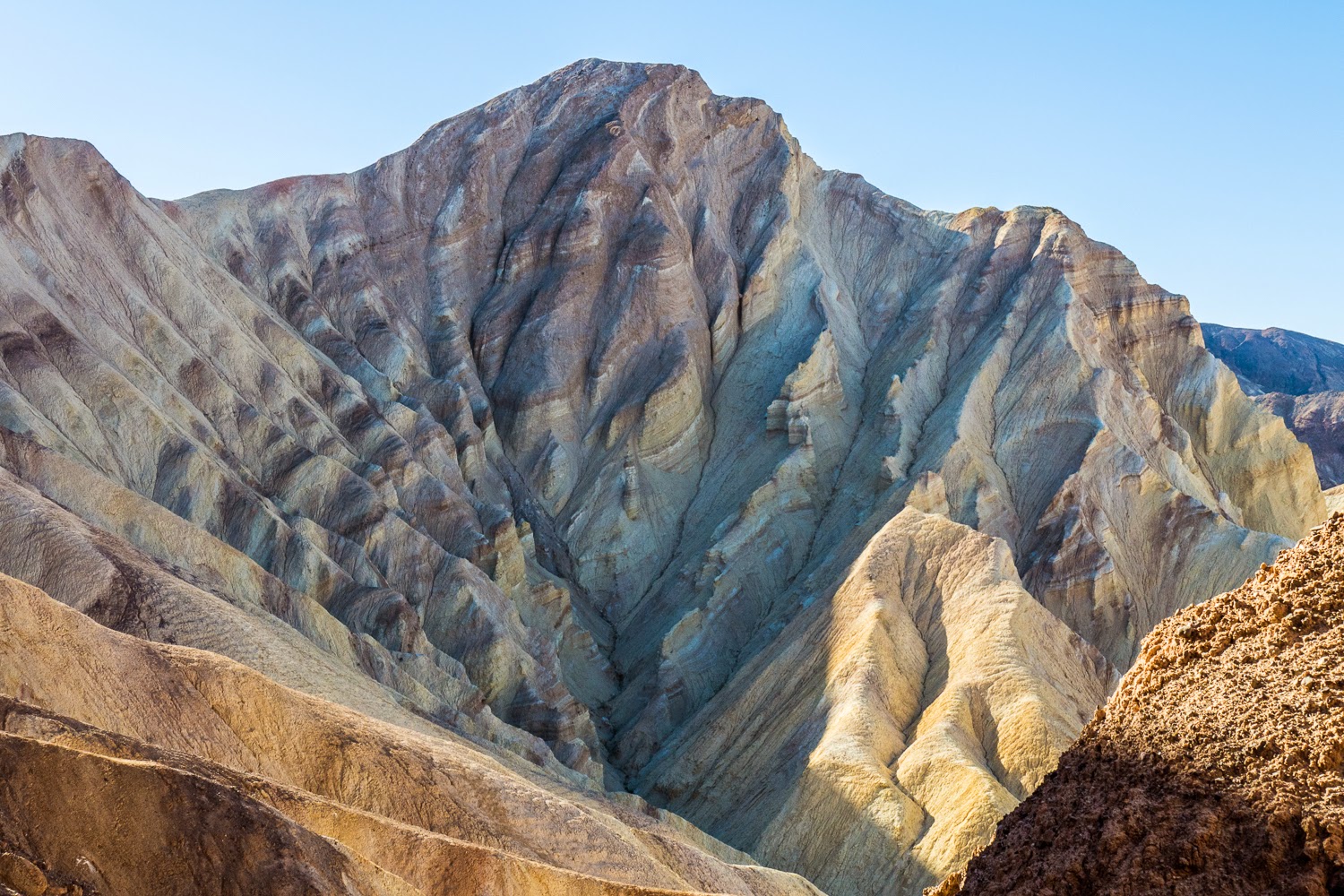 I keep this photo even though I don't remember where it was on the trail, because it makes me look like a great adventurer, hiking to a drop off that requires rappelling to descend. 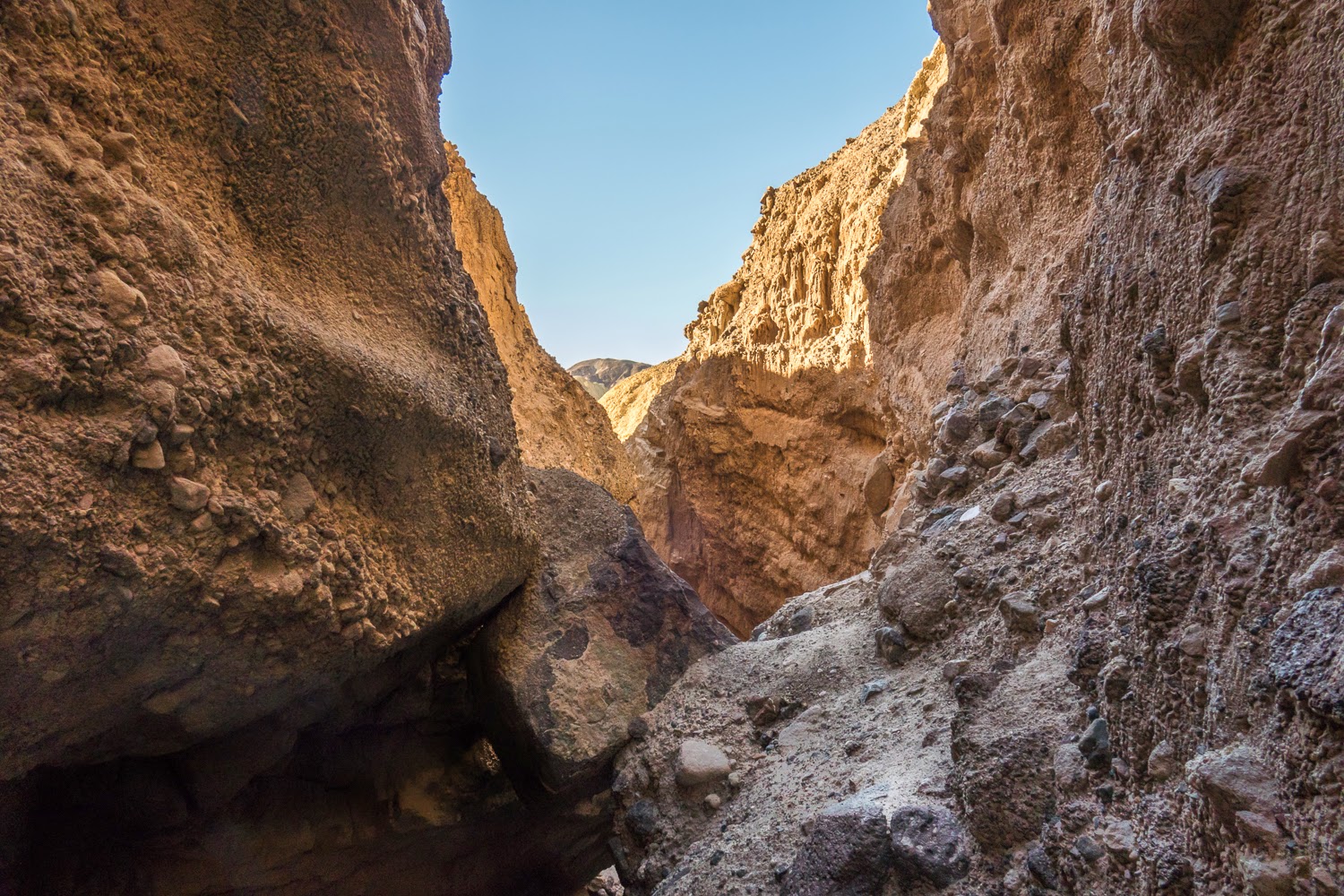 On the way out, I explored some side canyons. They are much narrower than others I've seen, and in some places the narrows allows only a one-person squeeze-through. This one needed a little ducking, a little sucking in of body parts, and confirmed my belief that I will never be a spelunker. I like elbow room. 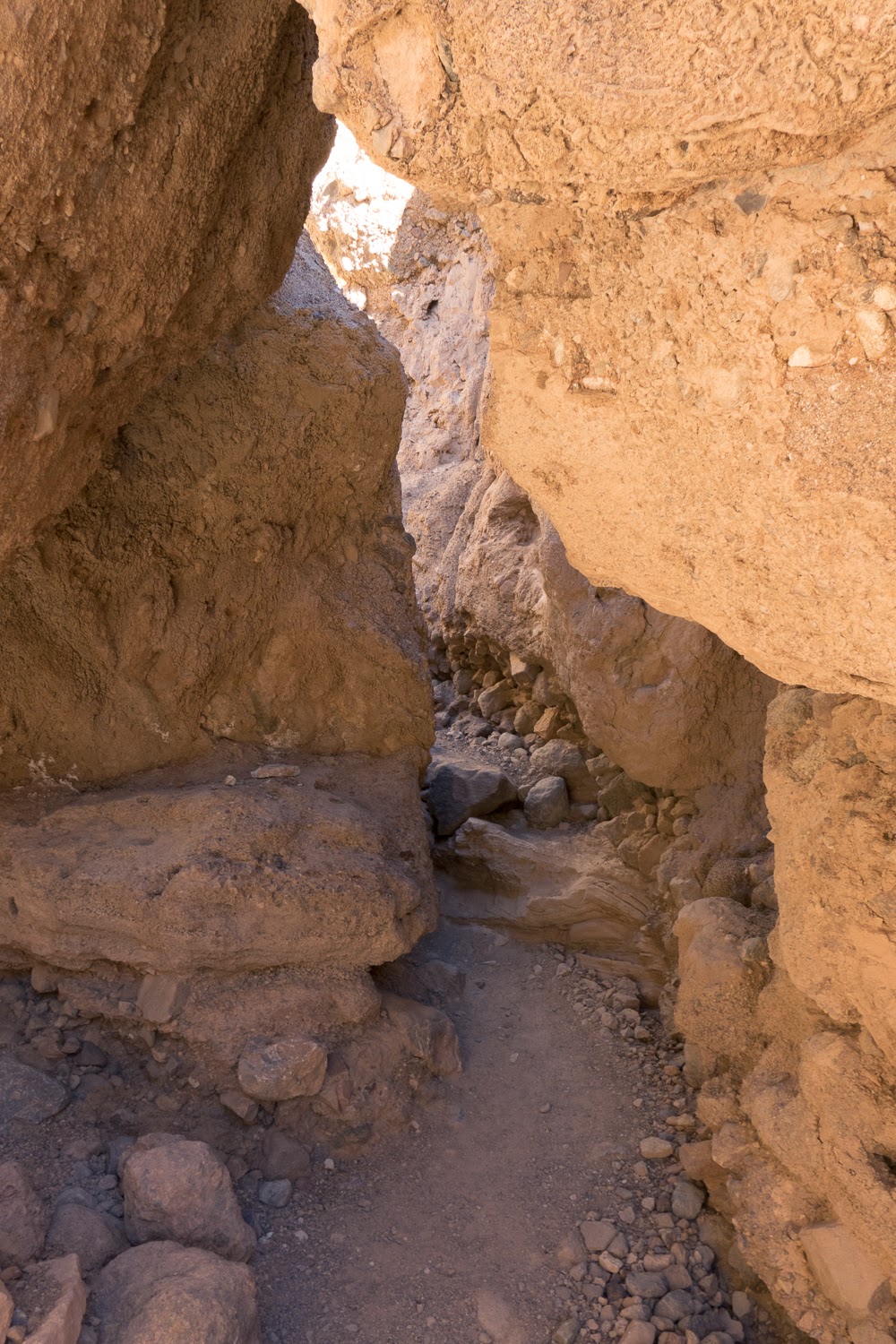 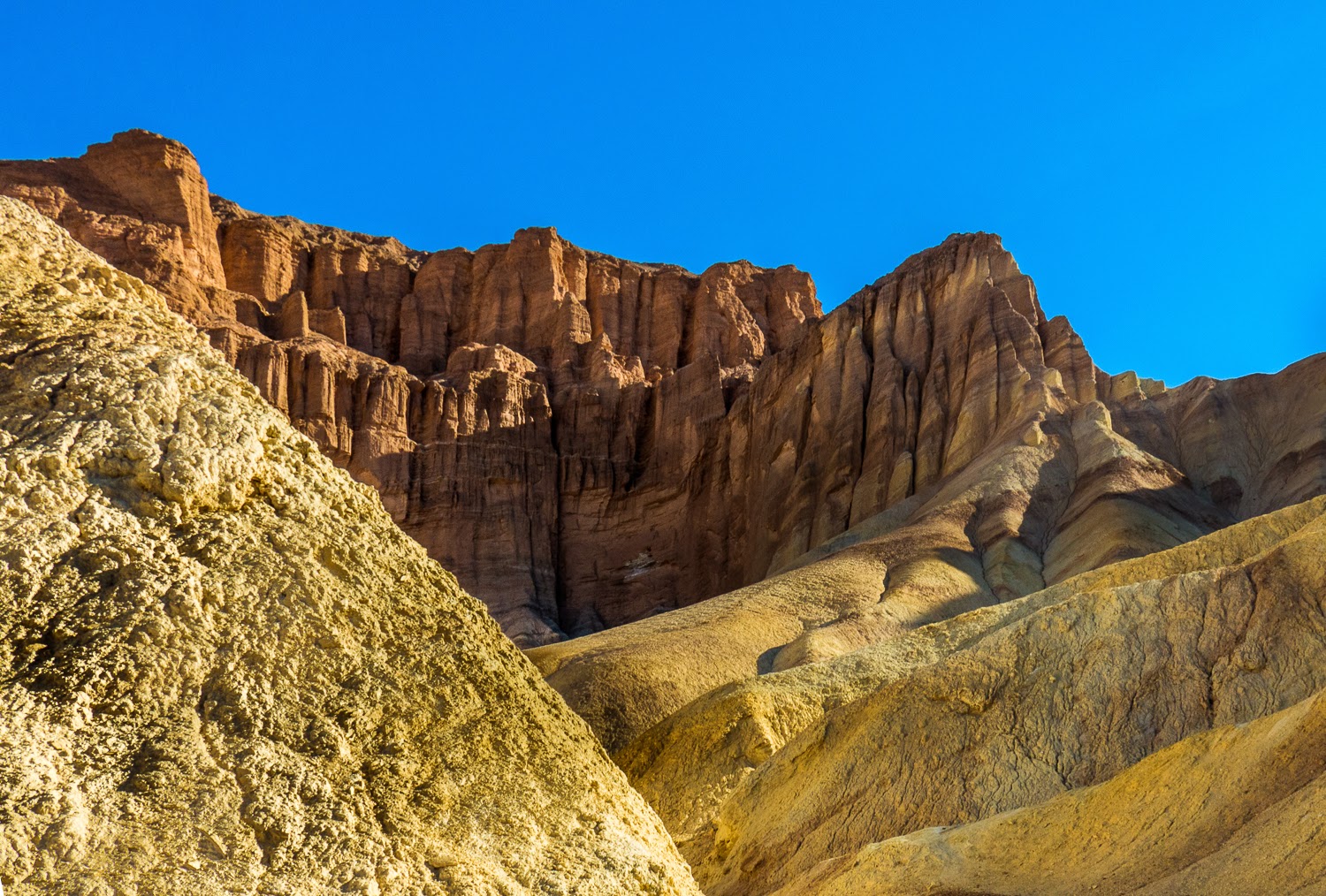 A different side route took me to this car-sized boulder. The track continued through a crevice between the gray rocks on the left, which was wider than it looks here, and which doglegged quickly off to the left, so that I couldn't see... 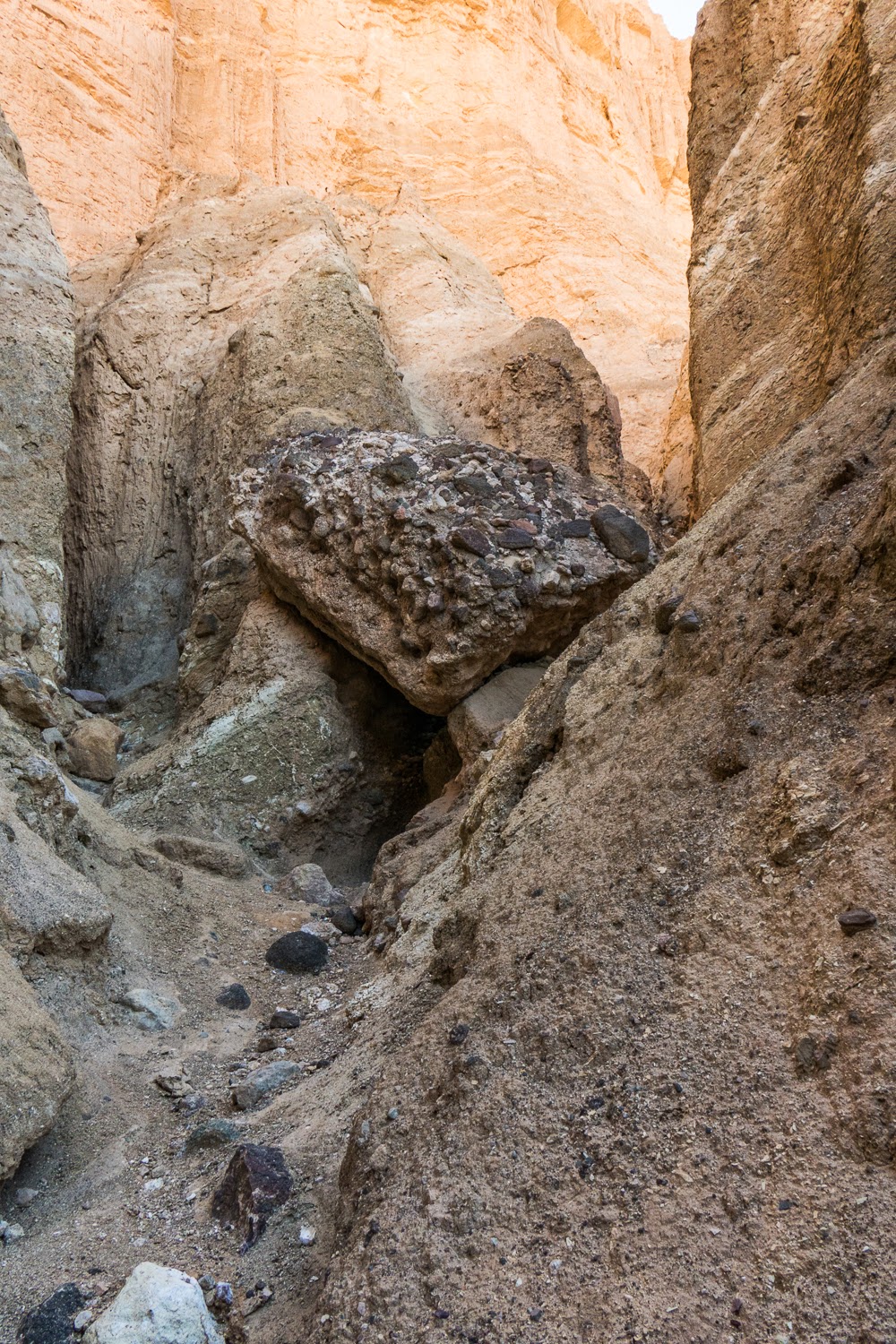 this thirty-foot fall until I was on it. There are undoubtedly climbers for which this would be child's play, but I didn't even debate the issue. It was the end of the line for me. 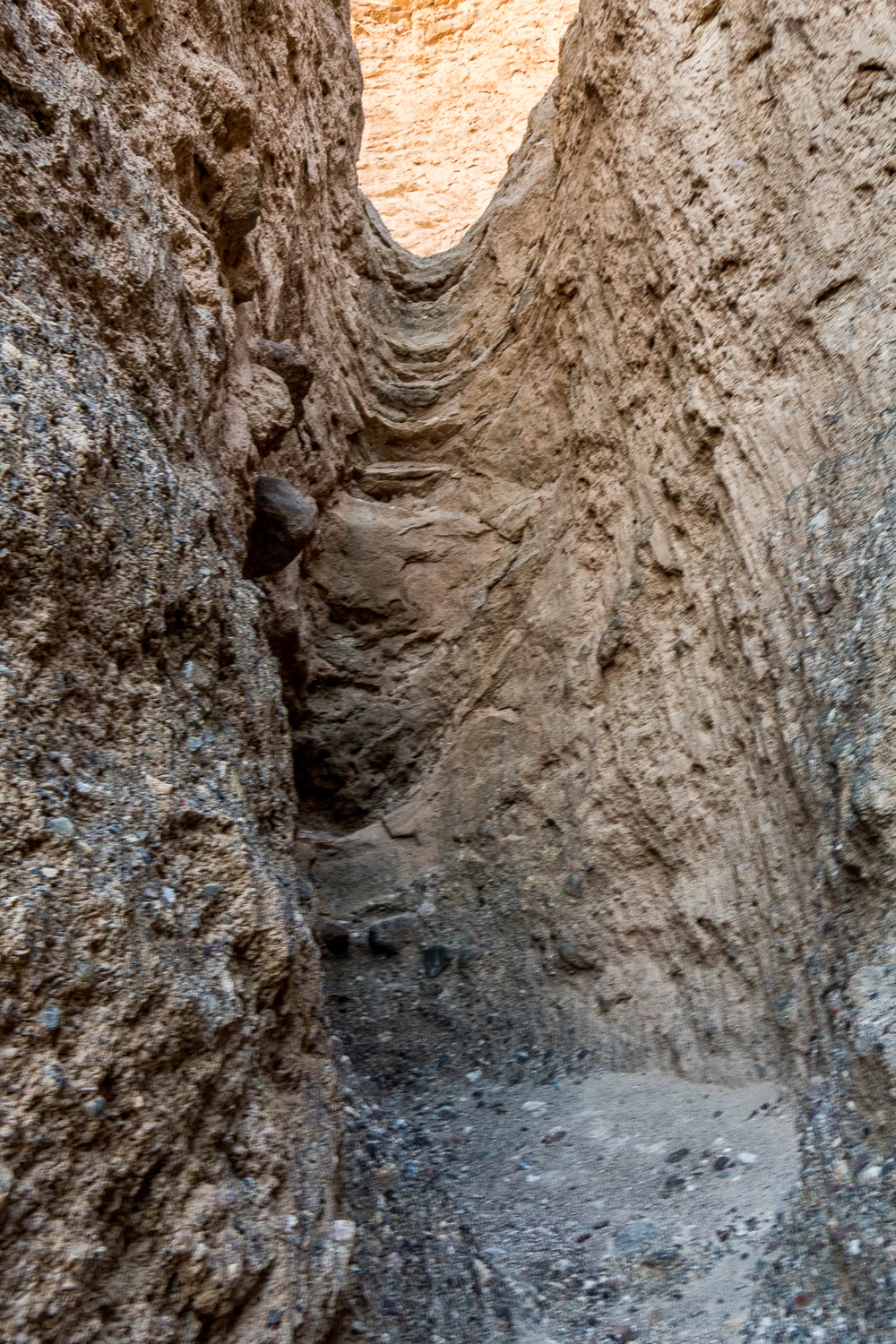 One mesmerizing quality about Death Valley is its changeability. The weather, the time of day, or any variable imaginable, all contribute to the urge to explore, go, see, and do, yet never be bored. We can look at the Panamint Mountains across the salt flats a dozen times a day and never see the same shadows, the same hue, or the same detail in the fans. One afternoon I walked as the sun was low and watched the mountains behind the house light with a golden glow. Nothing different, right? than would be expected from late, slanting light. But what made this sight different, no - unique, was that among the peaks and valleys of those mountains, only the farthest peaks, but those peaks in their entirety, even down into the valleys in front of them, were lit, but not one bit of the peaks in front of them that were at the same level as the valleys and in some cases, even taller. It's hard to describe.

So this view down another canyon was a fun surprise, an arch formed of two kinds of rock. Anywhere else I would expect to see arches made of the same rock, but not Death Valley, where the unexpected is the norm. After all, who would expect the riches that are here for the looking in a place called Death Valley? 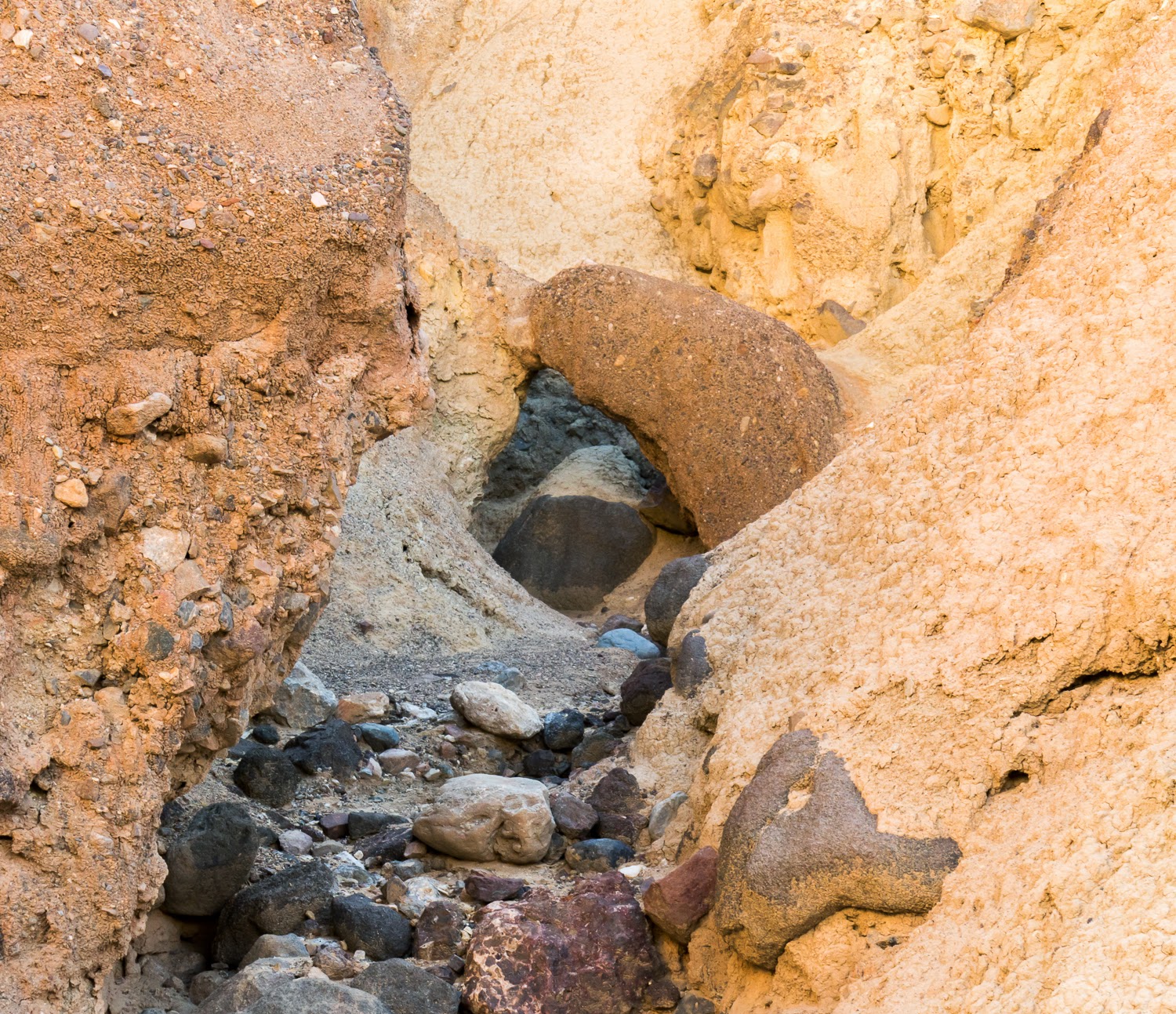 HH and I speculated about what this place would have been called if the '49ers hadn't gotten to it first. We, who are rarely without words, were practically speechless. Gold Valley? Borax Valley? Yikes. Now that we've been here, even this short time, our impressions of this vast, empty, indescribable place seem to conclude that there is no other name that so suits and yet is so unforgiving, as its current one.

Here's the story behind its name from the NPS website:

Death Valley was given its forbidding name by a group of pioneers lost here in the winter of 1849-1850. Even though, as far as we know, only one of the group died here, they all assumed that this valley would be their grave. They were rescued by two of their young men, William Lewis Manly and John Rogers, who had learned to be scouts. As the party climbed out of the valley over the Panamint Mountains, one of the men turned, looked back, and said "goodbye, Death Valley." This name, and the story of The Lost '49ers have become part of our western history.

On my way out, I passed about twenty people heading in, all in one group (including a guy who was barefoot, for heaven's sake). That's not fun to me. To me, the fun lies in quietude, a sense of discovery, a feeling that I am the first one there. There's a young seasonal employee here who's working on his Ph.D., his thesis on wilderness in our national parks. He came over a couple of nights ago and we talked about that. What does wilderness mean? How do we define it? Does it have the same definition wherever we find it? If we had a chance to hike in an old-growth forest or an old second-growth forest, which would we choose? Would we be more excited to be in a place where there's the appearance that no one has been there before? There are no right or wrong answers.

I know that nowhere I ever go will be in unexplored land, but my imagination and my heart are fueled by the magic of not only seeing no one, but also not seeing the evidence of anyone: no bootprints, no trash, no overturned rocks, no cairns, no packed trail through a canyon. I had never thought about it enough to put words to it but now that I have, it will be a compelling pursuit to seek those places that fuel me like they do.
=======

To those devoid of imagination a blank place on the map is a useless waste; to others, the most valuable part.  -  Aldo Leopold, A Sand County Almanac with Other Essays on Conservation from Round River