When we arrived in mid-December we were met by friends and fellow volunteers from Petrified Forest. They'd been here about six weeks by then, and they told me my next-trailer neighbor was a hiker and was looking forward to having someone to hike with. Deb was gone, home to Baltimore for Christmas, and I didn't meet her for a few weeks. When she returned she asked if I'd like to go to Fall Canyon with her, and one pretty day we set out. It was the first canyon I explored.

Let me just say this: the woman is a hiking fiend. Thank goodness she's a birder because once she gets moving the sight or sound of a bird is about all that will slow her down. This summer she's heading to the Alps. I pity the friend who's going with her because I can't imagine keeping up with her at altitude; sea level is hard enough.

After a tiring distance across th inevitable uphill - always uphill - alluvial fan, we finally arrived at the canyon's first narrows. 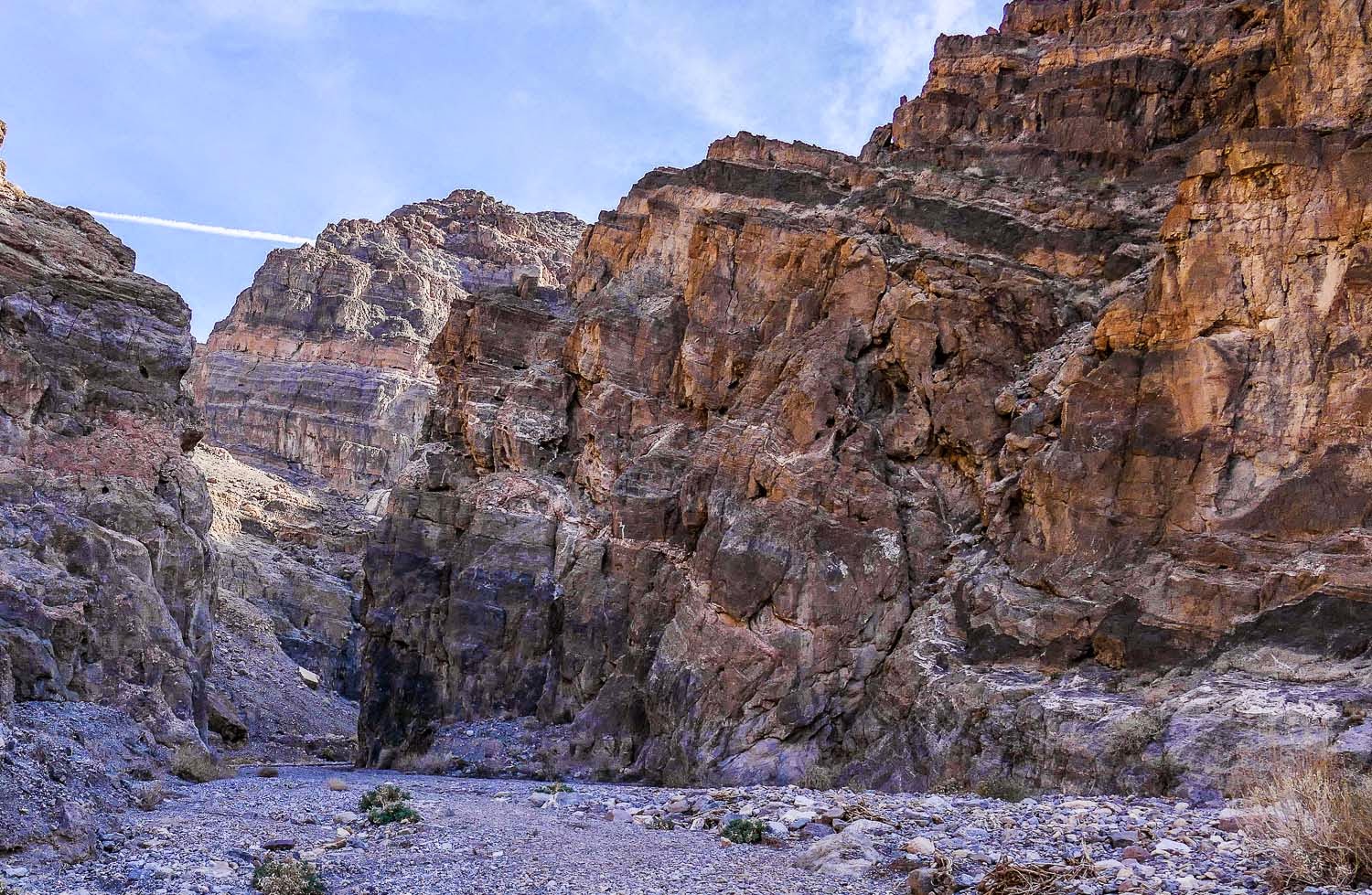 There is the evil woman who tortures me. I like her. 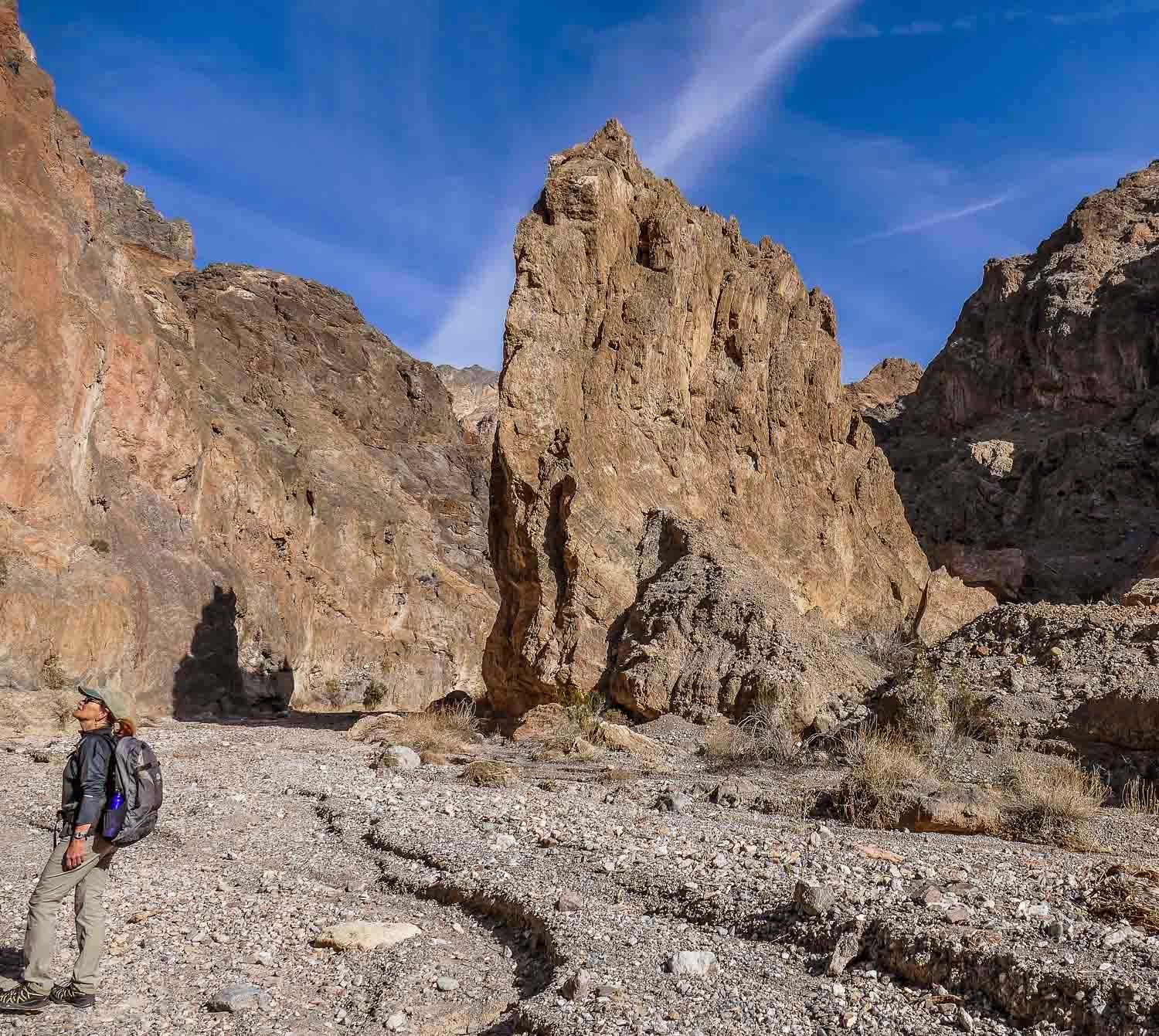 Have you ever seen rock that bends into distinct curves? It's such a graceful sight that belies the name given it: tortured rock. 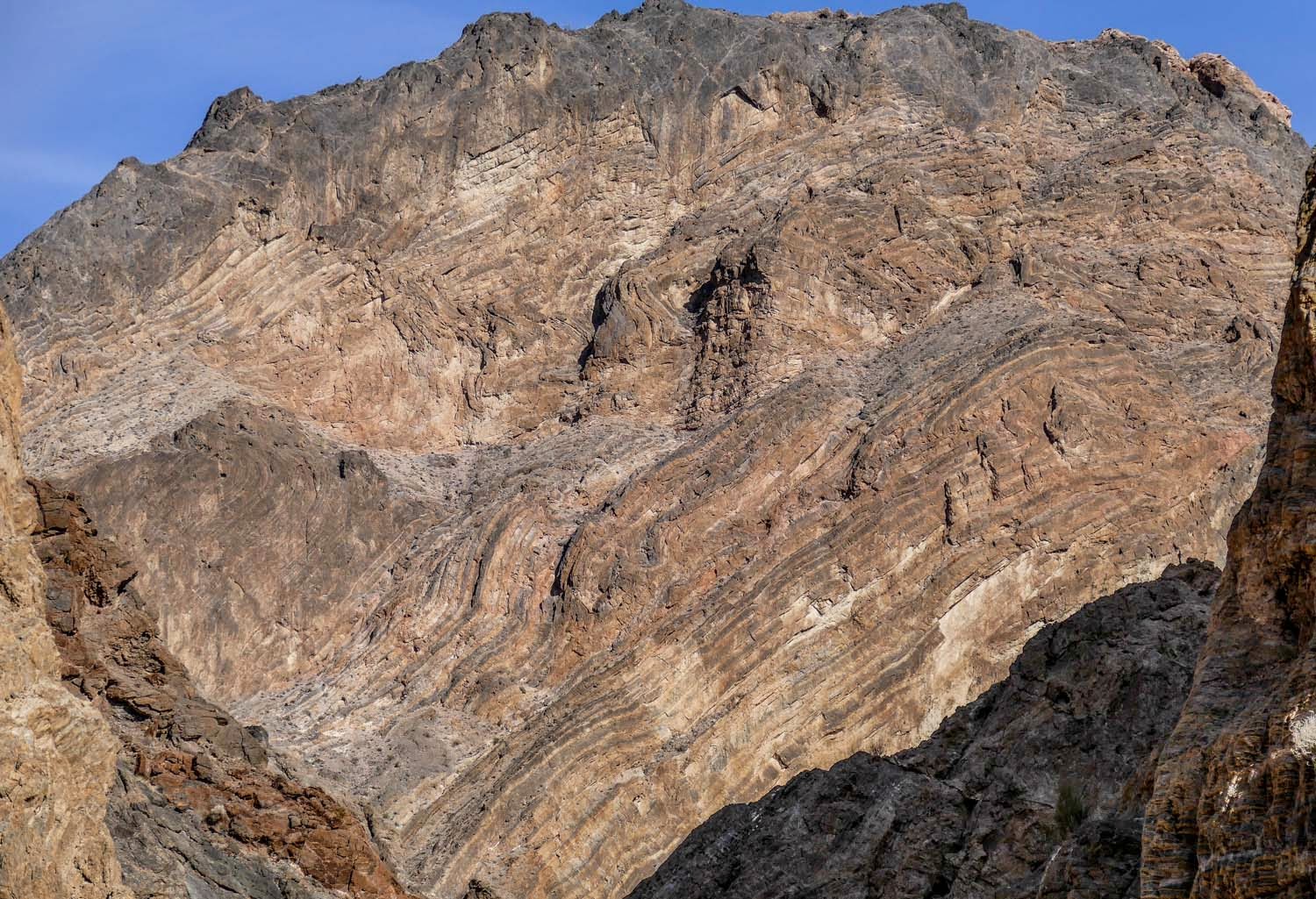 Another narrows. They're interesting not only for their unique features but for the mystery of what lies around the corner. Some walls are rough and uneven, some are polished smooth and almost glossy. A couple of weekends ago Deb and another friend and I camped for a night at Marble Canyon, where we found narrows walls as coarse as a grater, and a couple of feet lower on the same wall, it was worn smooth by flood waters surging through over the decades. Interesting stuff. 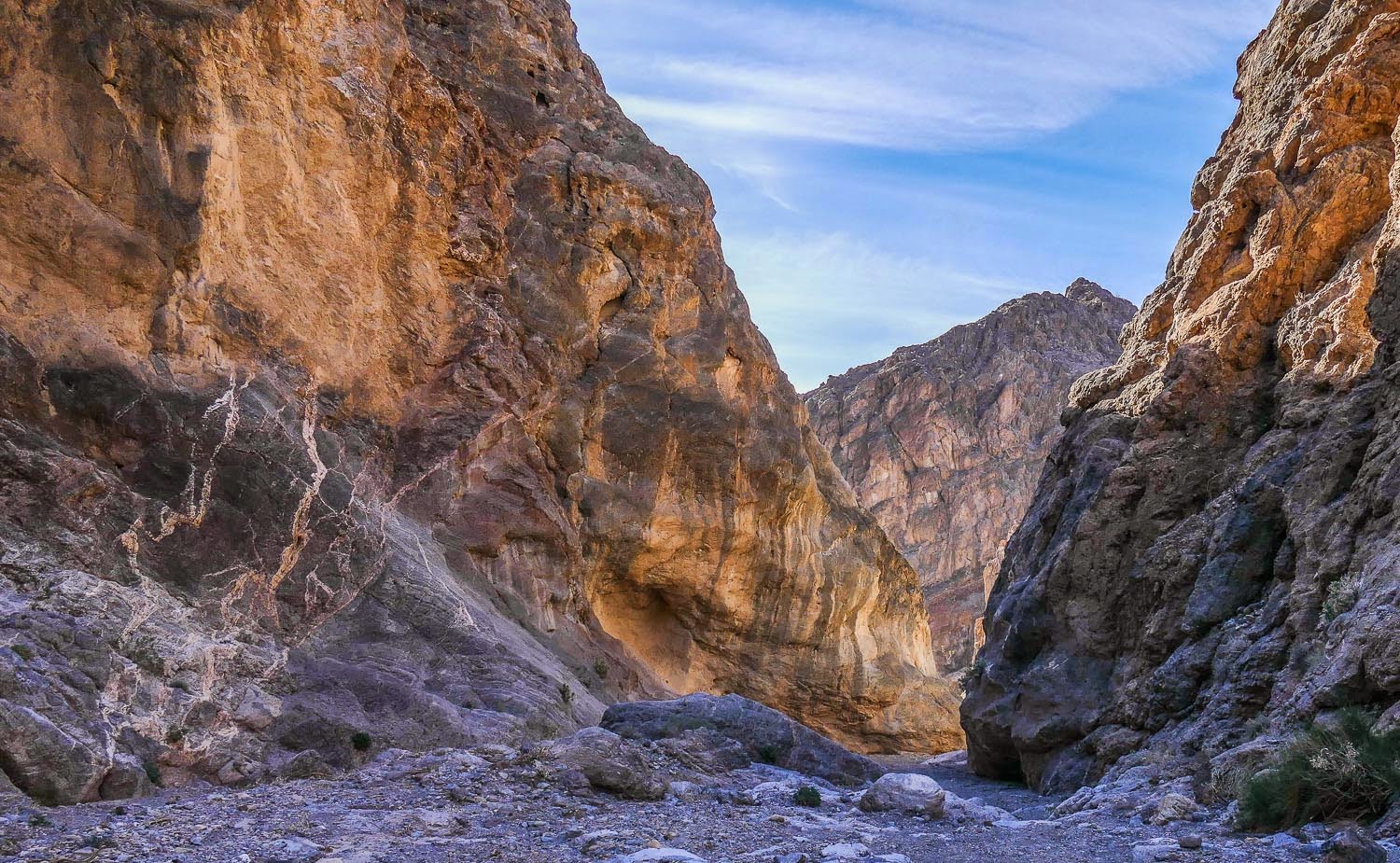 Yet another narrows. Loose, deep gravel makes this a moderately strenuous hike but also encourages a slower pace.  If you hurry through, what's the point of being there? Even Deb slows for this.

Some say this is one of the more beautiful canyons in Death Valley. The changing colors and textures make each one unique, that's for sure. I haven't been to more than a few but I can easily see why this one would make such a list. 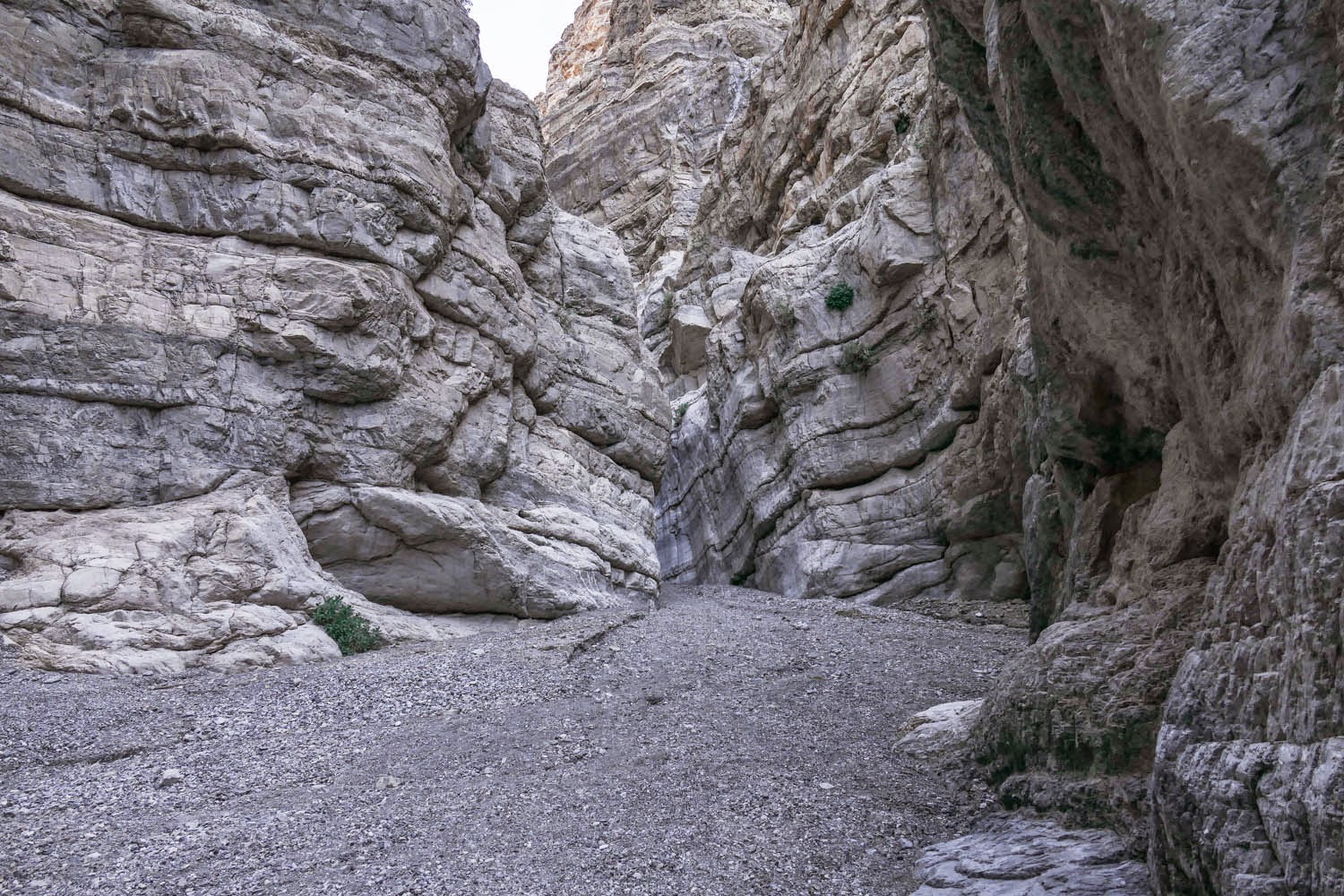 Our hike ended at this dry fall of 18 feet, and no scalable route over it without climbing gear. Before we got here I bought a copy of Hiking Death Valley by Michel Diconnet and later found out it's considered the bible of exploring the Valley. The author describes the routes, of course, but also tells of the geology, history, flora, and fauna that might be encountered. He says there's a route around the fall but we didn't look for it, and this was our turnaround point. Because the canyon is easy to get to I hope I can hike it again and find my way to its upper reaches.

The total route was about seven miles and I felt every one of them, which leads me to ask, Why don't I have a jacuzzi in the house? Somebody needs to remedy that. 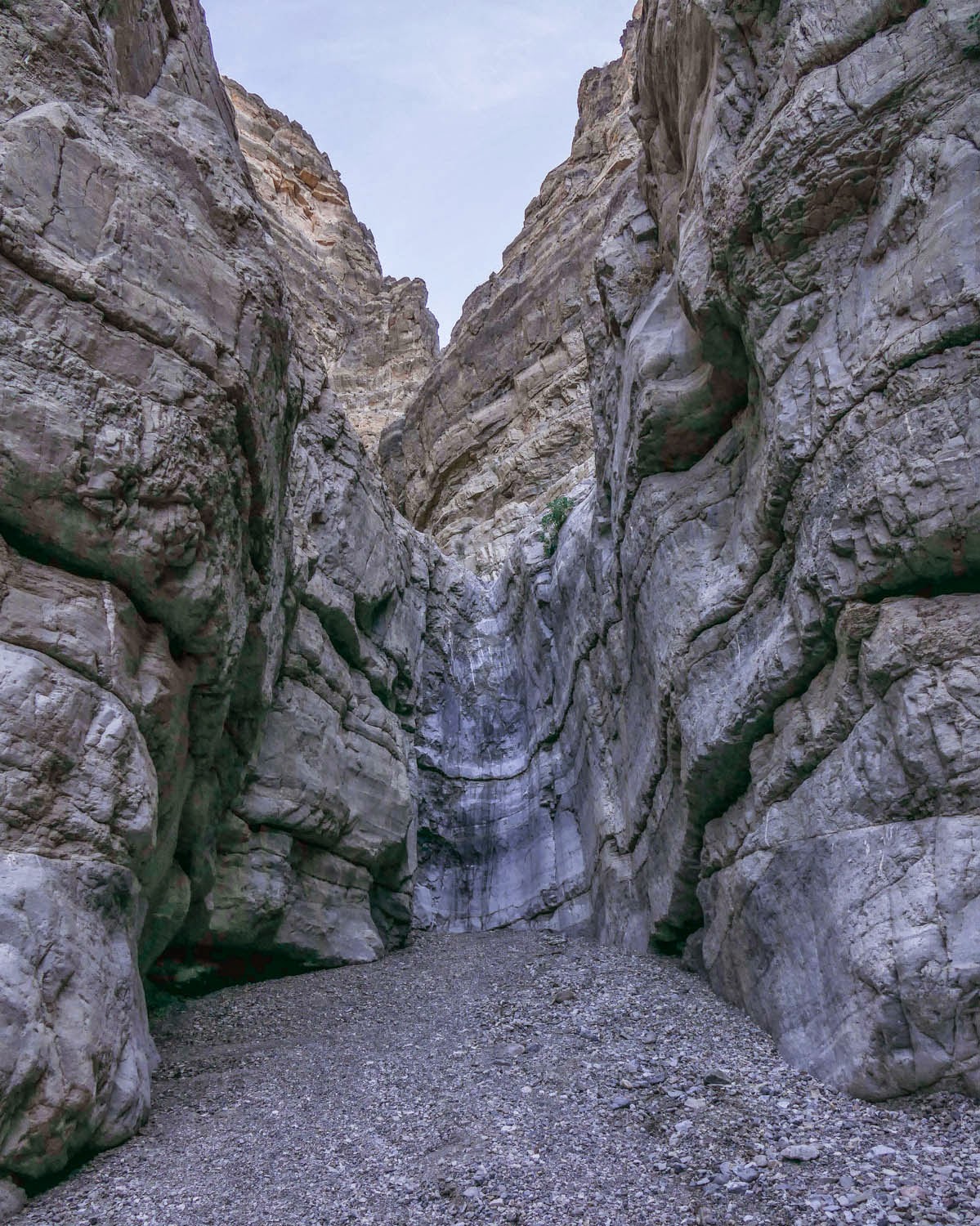 The walls of Fall Canyon's narrows are hundreds of feet high in places, which makes it different from others that don't have the dramatic enclosed feeling. 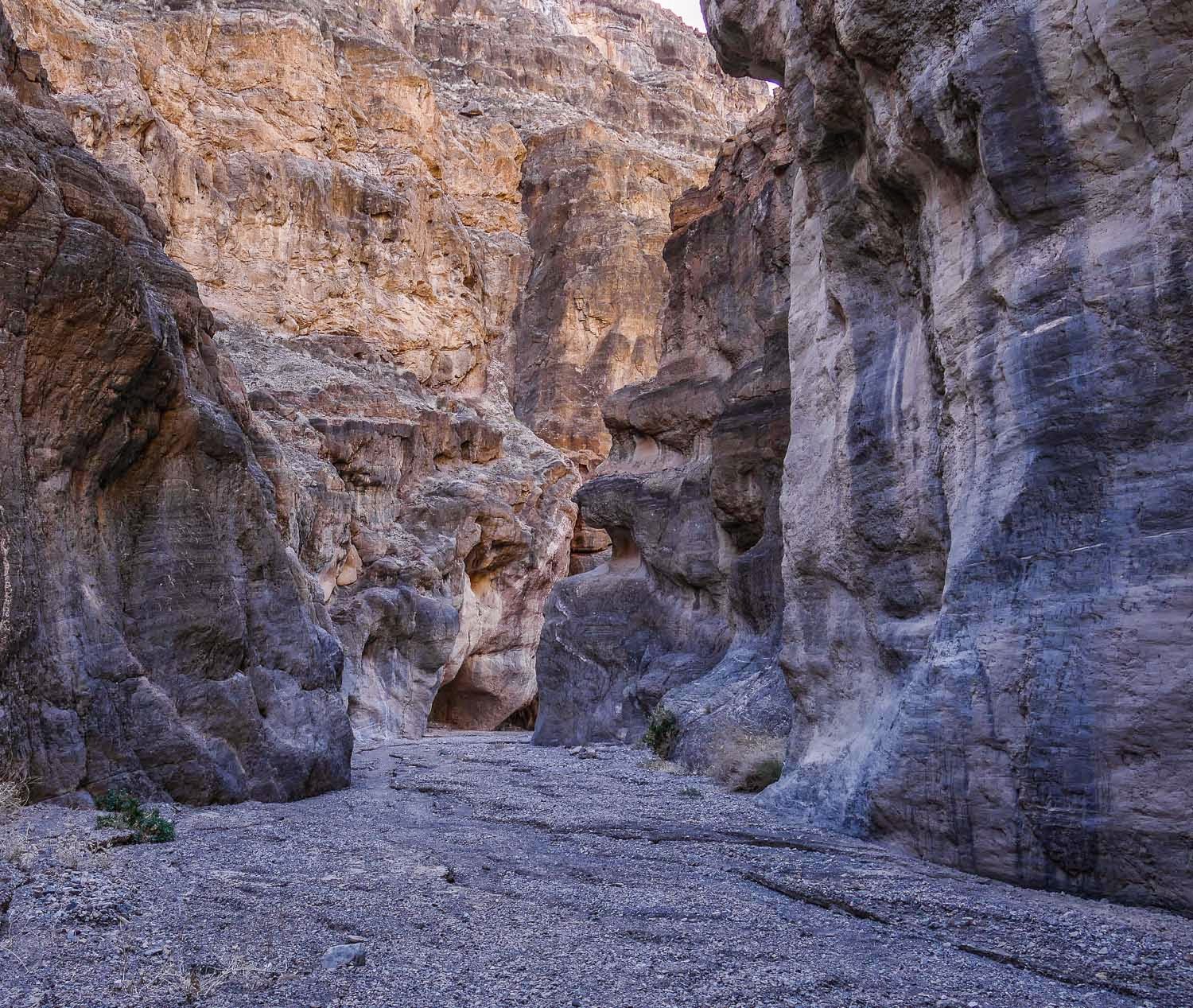 I am awaiting wildflowers with bated breath. We've had rain several times, a good amount last week, and I have my fingers crossed for an abundant crop. There are a dozen or so wildflowers known as Class I Endemics; they grow only within the confines of the park. More than two dozen are Class II; the majority of their range is within the park. This, of course, is some of last year's crop, but this year's should start blooming at the lower elevations on the darned alluvial fans within the next few weeks, and out I will go again. I can't get enough of this paradise.

For a very different view of Death Valley, read Death Valley in '49 by William Manley. I found it as a free download on Amazon. 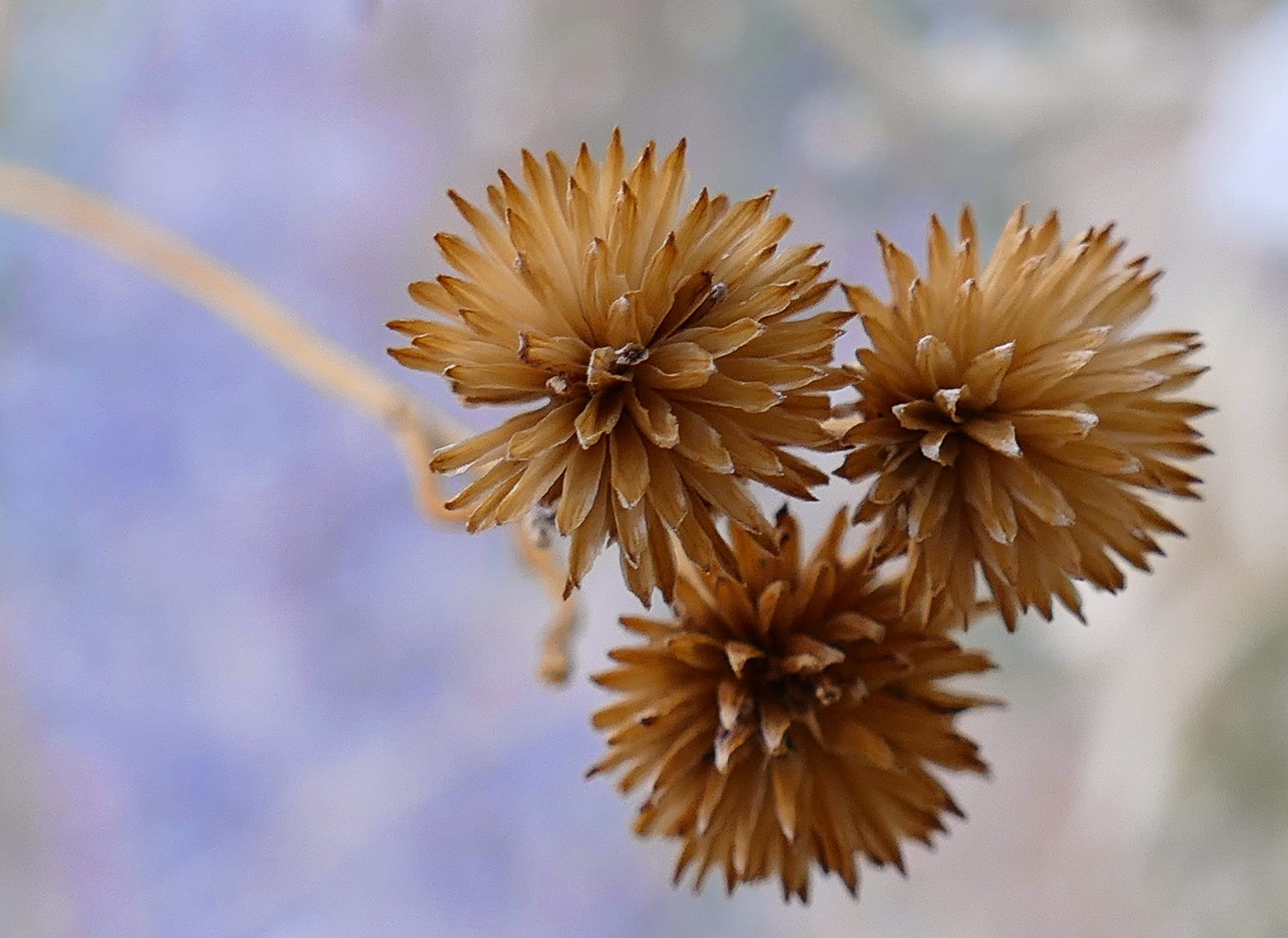 In the American Southwest, I began a lifelong love affair with a pile of rock. - Edward Abbey