This would have been up a couple of days ago but for the lack of internet. It took at least two hours just to upload the photos.

HH and I went to Boulder City, Nevada last Friday to spend the night in a hotel that's on the National Register, the Boulder Dam Hotel. It was built in 1933 to accommodate official visitors during the construction of Boulder (now Hoover) Dam, and was listed on the National Register of Historic Places in 1982. Amazingly enough, I didn't take one photo there. Maybe next time.

HH and I had diverging destinations in mind for this trip. He wanted to see Hoover Dam, especially its innards, and I wanted to see the Neon Museum and go to Costco. Ha ha ha, you say. Costco!? You bet, it's one of my favorite places because nowhere else can you get Costco pizza, a huge bag of frozen chicken wings, and still-warm French bread all in one spot.

Ever since I heard about the Neon Museum in Las Vegas, years and years ago, it's been on my Bucket List's B-list - not important enough to make a special trip for, but if I was in the neighborhood, it wasn't to be missed.

The Hoover Dam photos will be coming soon, but this is my journal so I get to decide what goes up first, and it's the Neon Museum today.

The museum is a nonprofit organization exhibiting iconic Las Vegas signs. One might expect lots of neon from a neon museum, but we were surprised to find most signs were made with incandescent bulbs.

The letters and other images that comprise the museum's sign mimic those of historic provenance. The N is from the Golden Nugget; the E from Caesar's Palace, the O from Binion's Horseshoe; and the final N from the Desert Inn. The stars are from the Stardust. 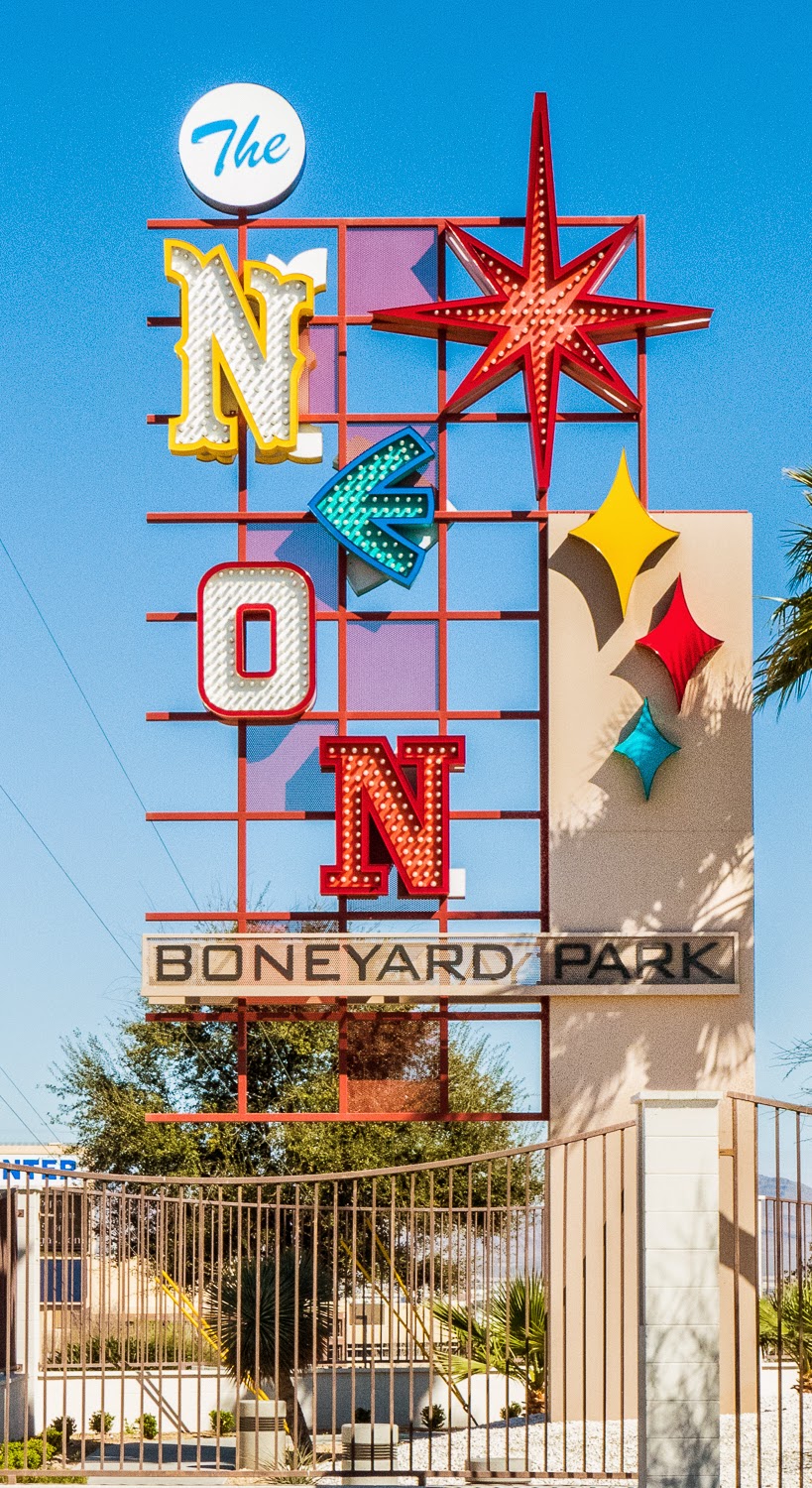 Visits to the 2-acre boneyard are available by guided tours only, which makes sense when the signs are at ground level and within touching distance. There are about 150 signs here and more in another lot that's not open to visitors.

One of the first views is of the mix of symbols from different casinos.

Not all signs are in good repair. 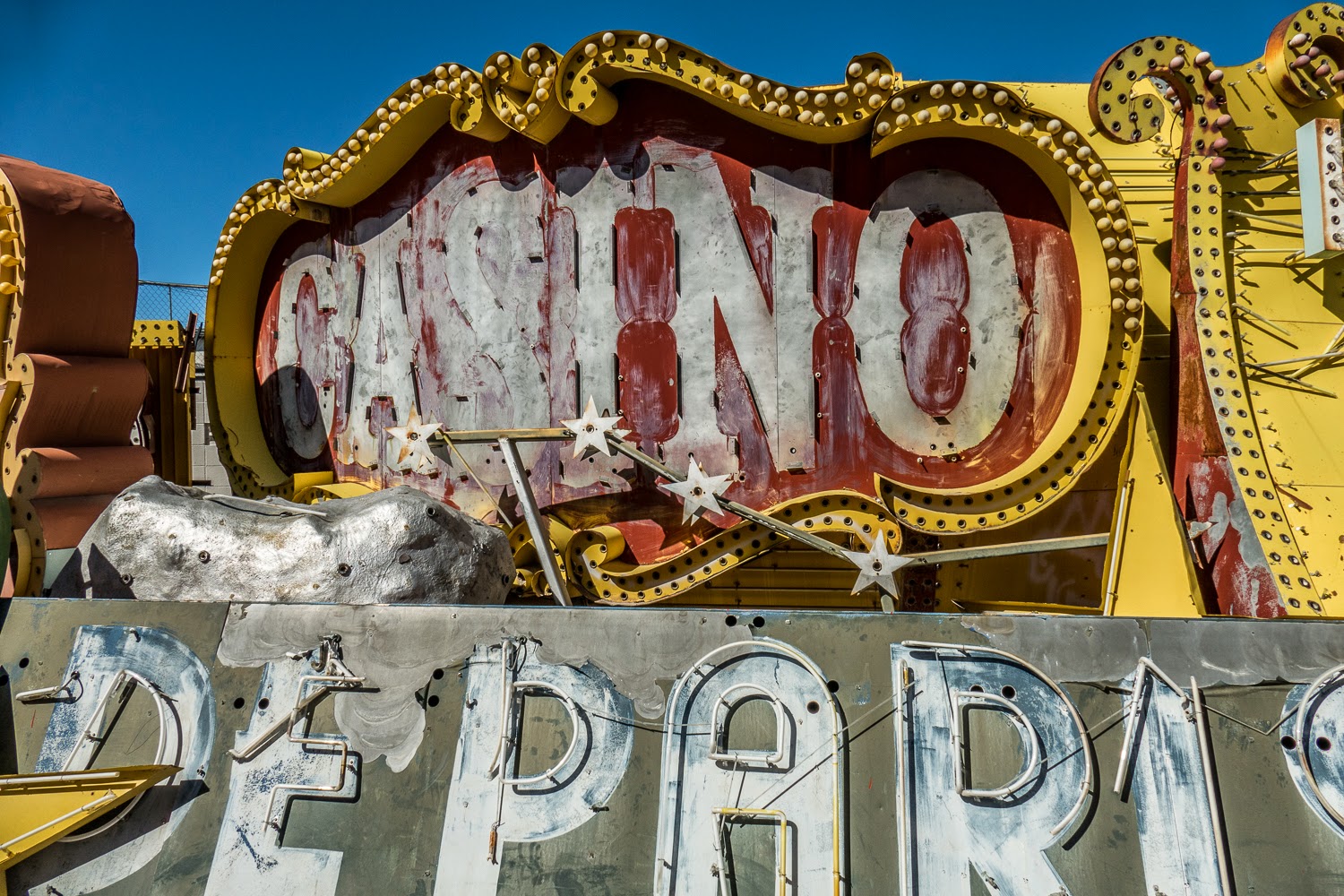 The script is from Moulin Rouge, and the stars from the Stardust. 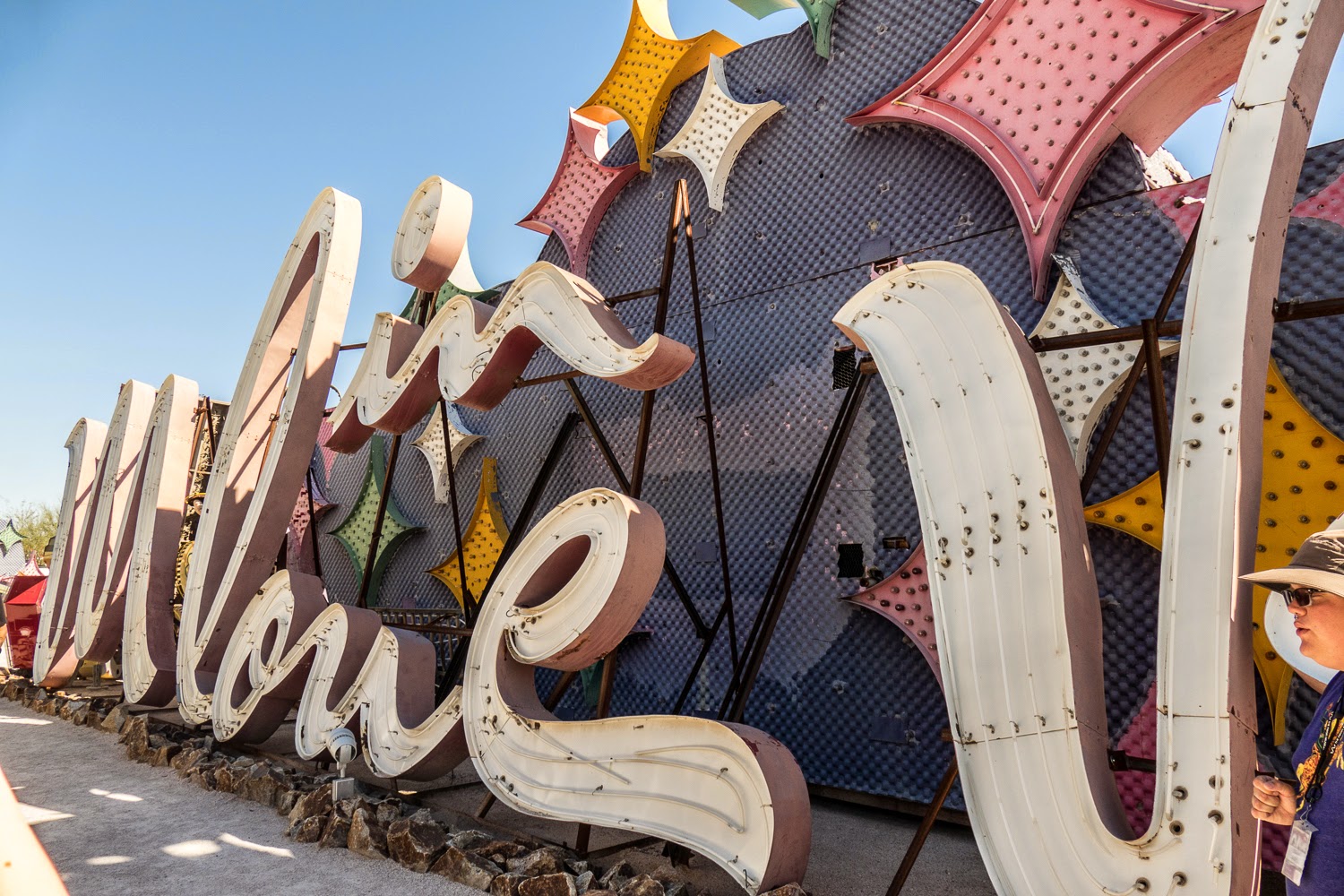 The walkways are narrow so we were strung out like ducklings in a row. 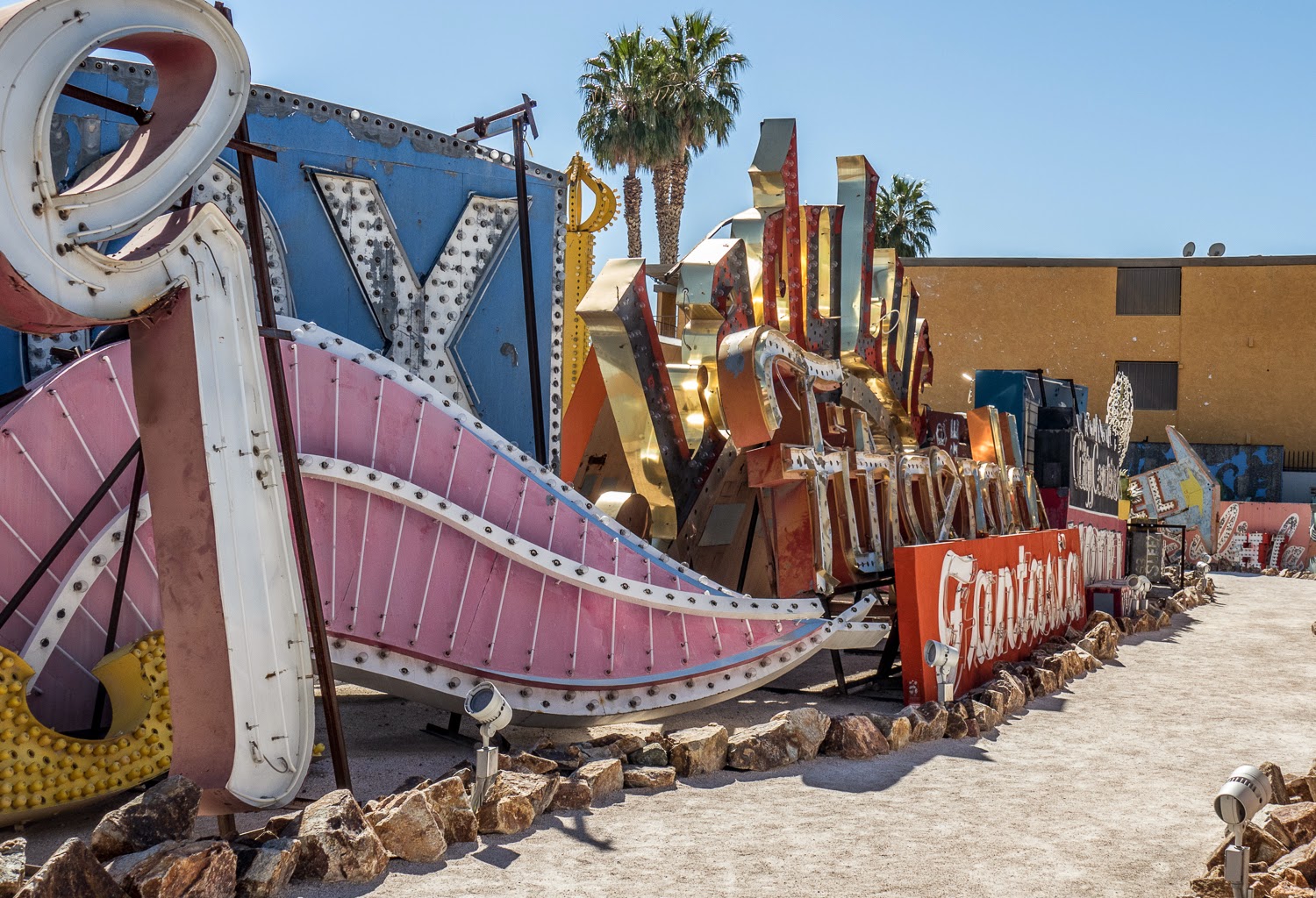 This sign from Binion's Horseshoe resulted in my favorite photo of the day, below. 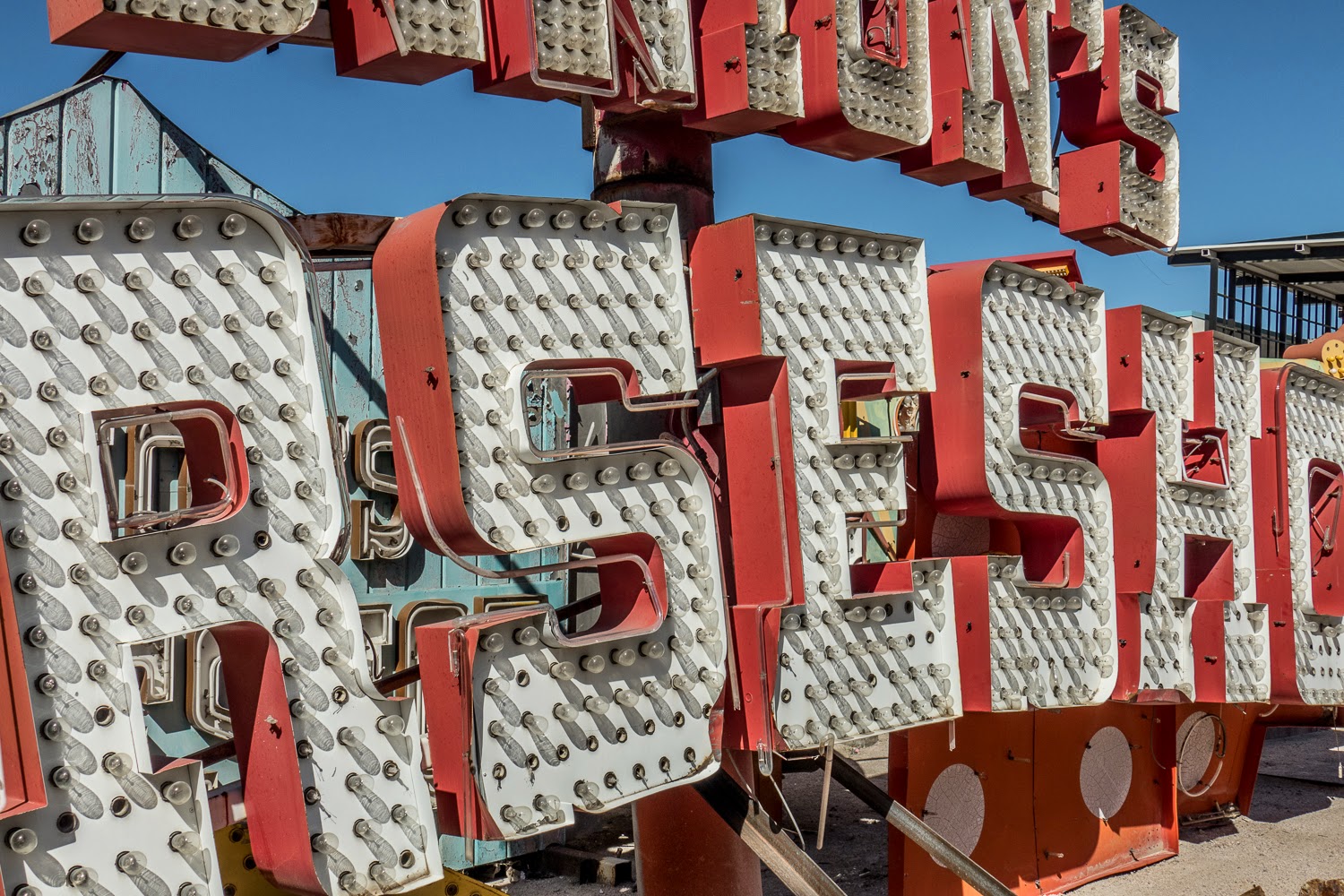 It looks like a school of fish. Well, I think so. 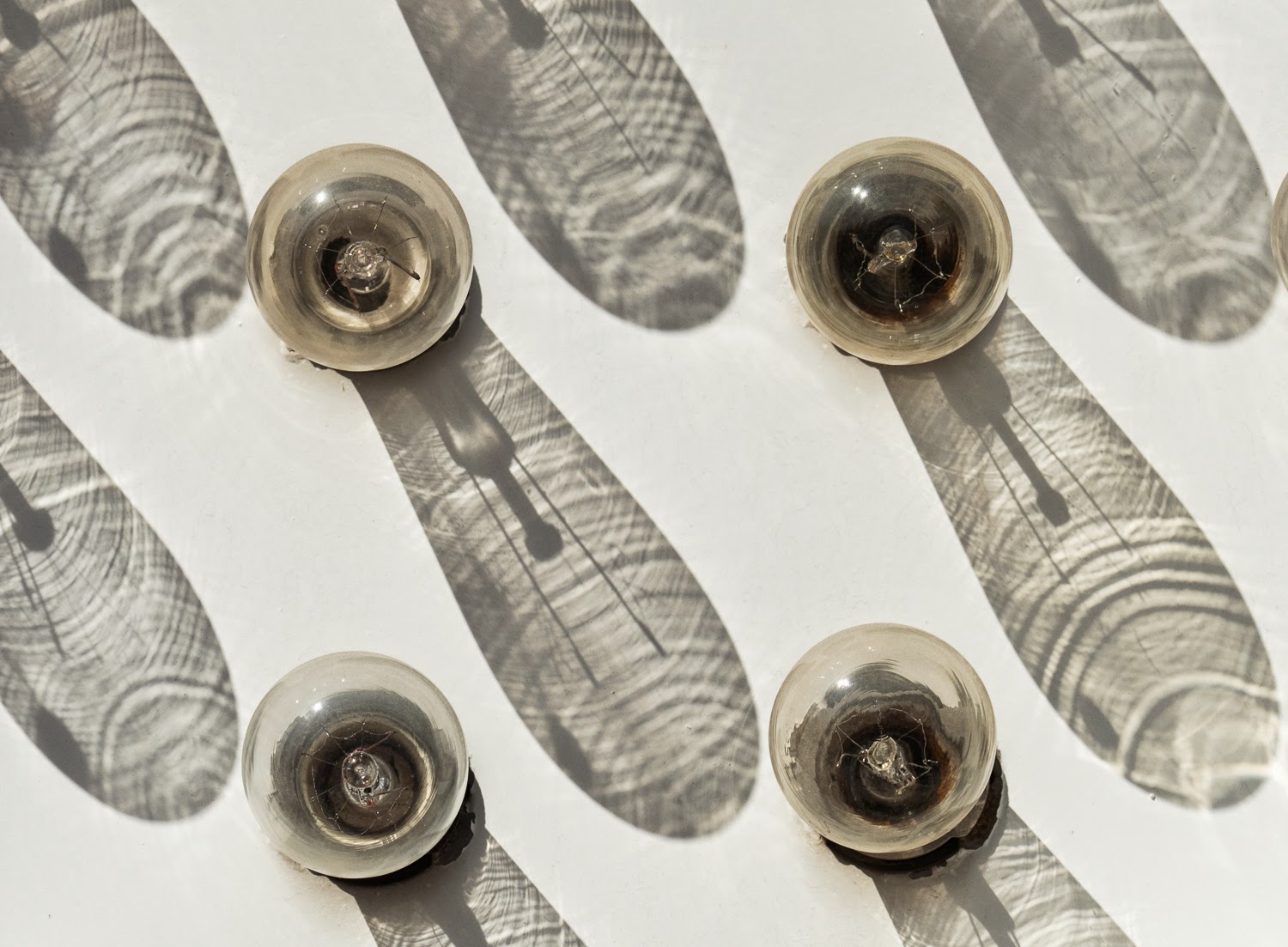 Here's a good neon-tube example. It's a yucca blossom, formed freehand. The sign below it is made of metal cut in yucca-leaf spikes and of neon tubes formed to resemble leaves. Our guide pointed out the different colors of the tubing in the leaves. The varying colors are due to the discovery that the metals used to color the glass originally were on the unhealthy side and when a repair was made, a different metal was used instead. 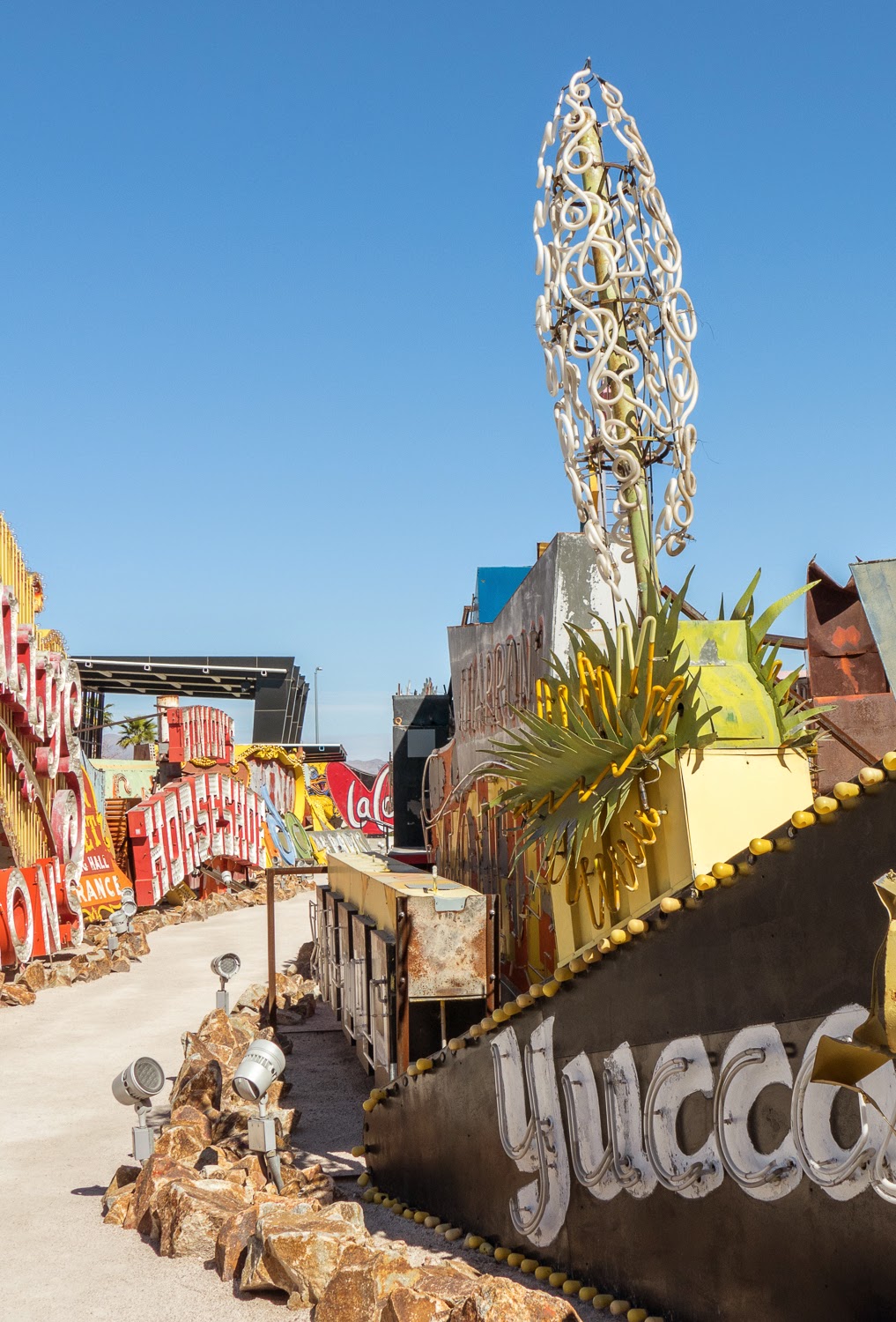 The visitor center, which I also neglected to get a photo of, is the former La Concha Motel lobby, built in 1961 in mid-century modern design. Donated to the museum to save it from demolition, it was cut into pieces, moved across the city, and reassembled on-site. From the museum's website:


A popular name for this type of architecture is “Googie,” which describes a style that references a time when the United States was enthusiastically anticipating the future. The La Concha lobby exhibits the Googie style with its exaggerated shell form, and thin, concrete structure seemingly held up by large plates of glass.
The Googie style of architecture thrived in the 1950s and early 1960s. It began as commercial architecture designed to make the most of strip shopping centers and other roadside locations. It fit the needs of the new California "car culture" and the dreams of the even newer space age. Googie has also been known as Populuxe, Doo-Wop, Coffee Shop Modern, Jet Age, Space Age and Chinese Modern. It is also sometimes identified as part of a larger overall movement of space-age industrial design.

The motel's sign follows the lines of the building itself in swoops and dips. 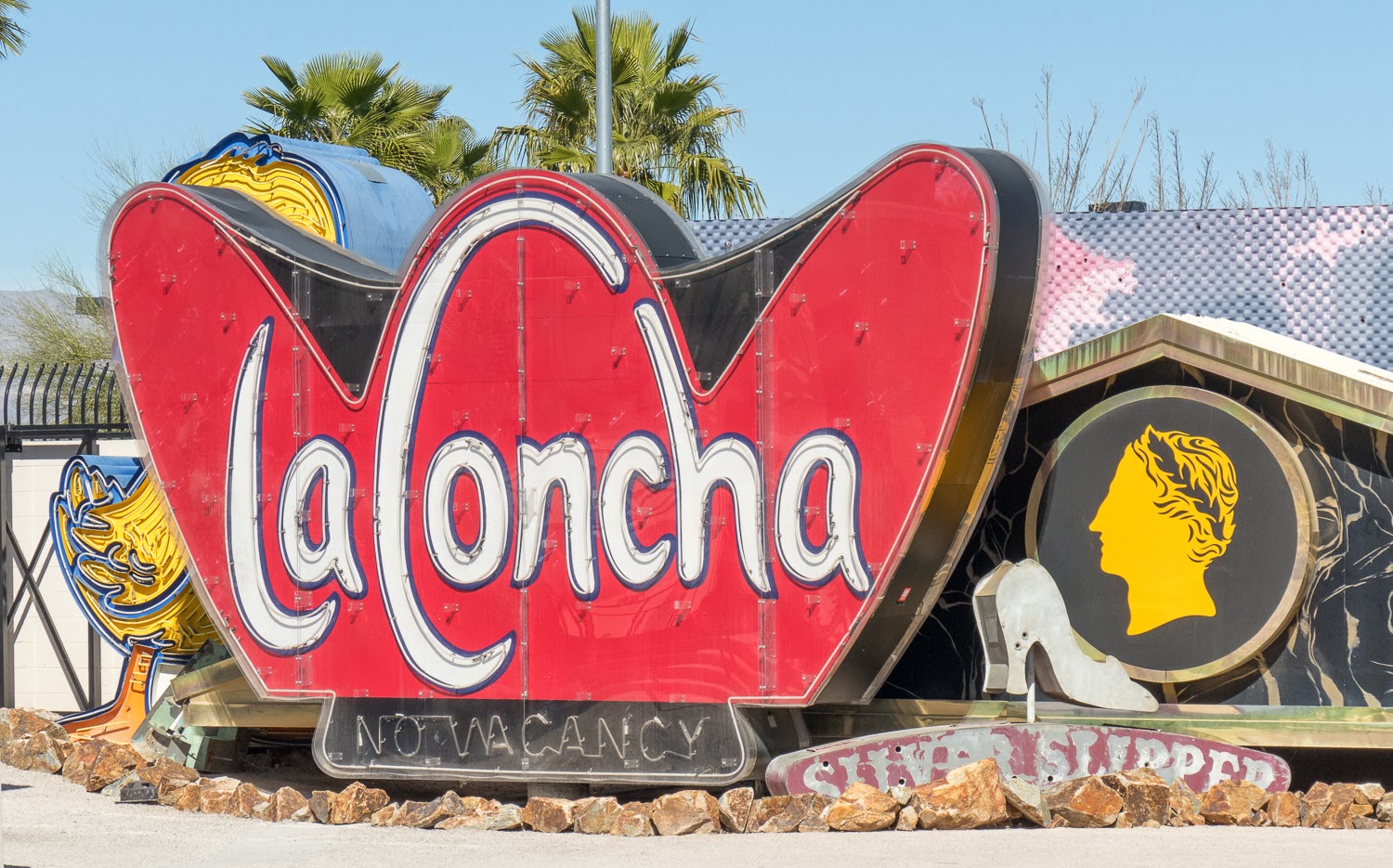 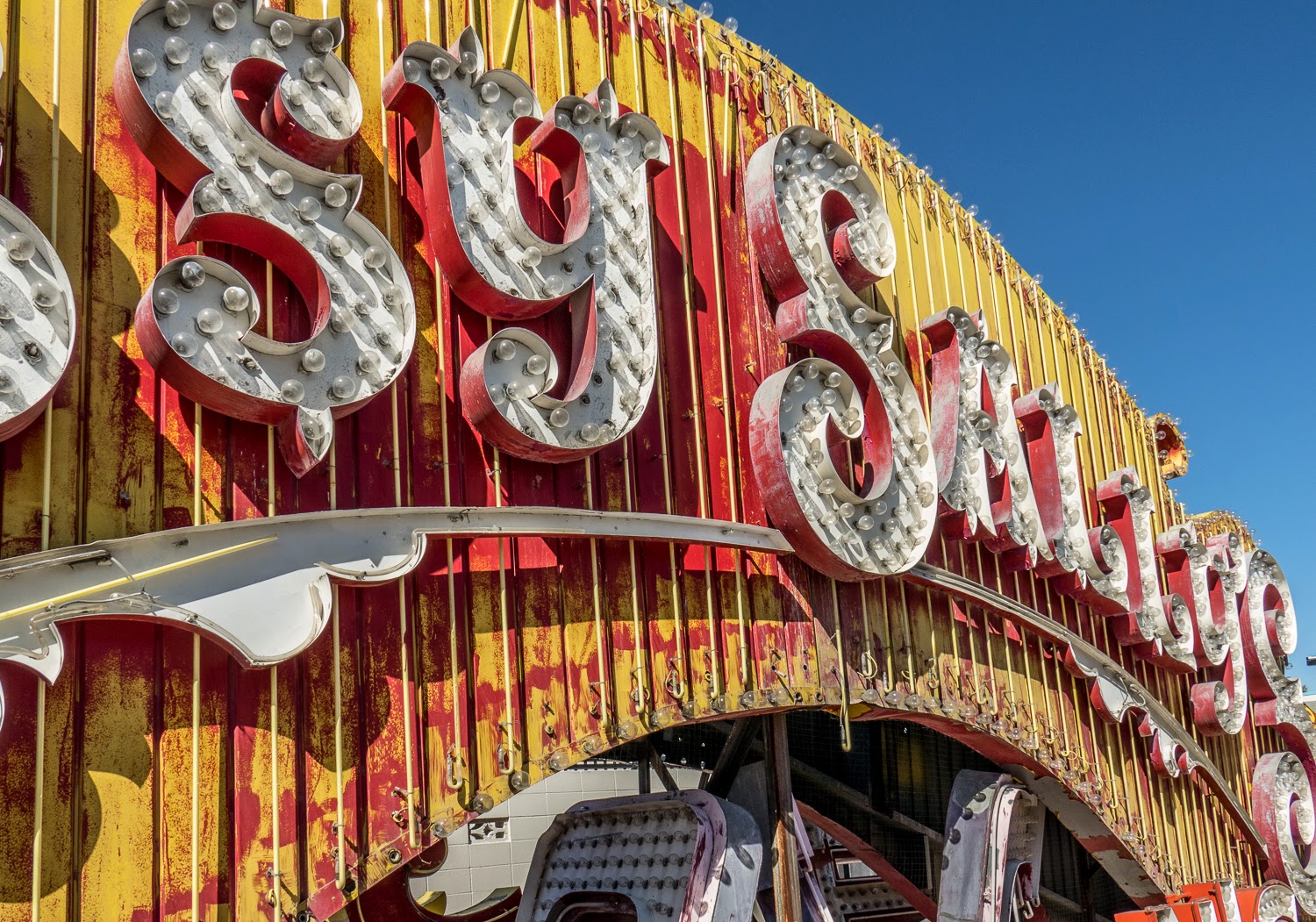 A short loop detours from the final stretch. 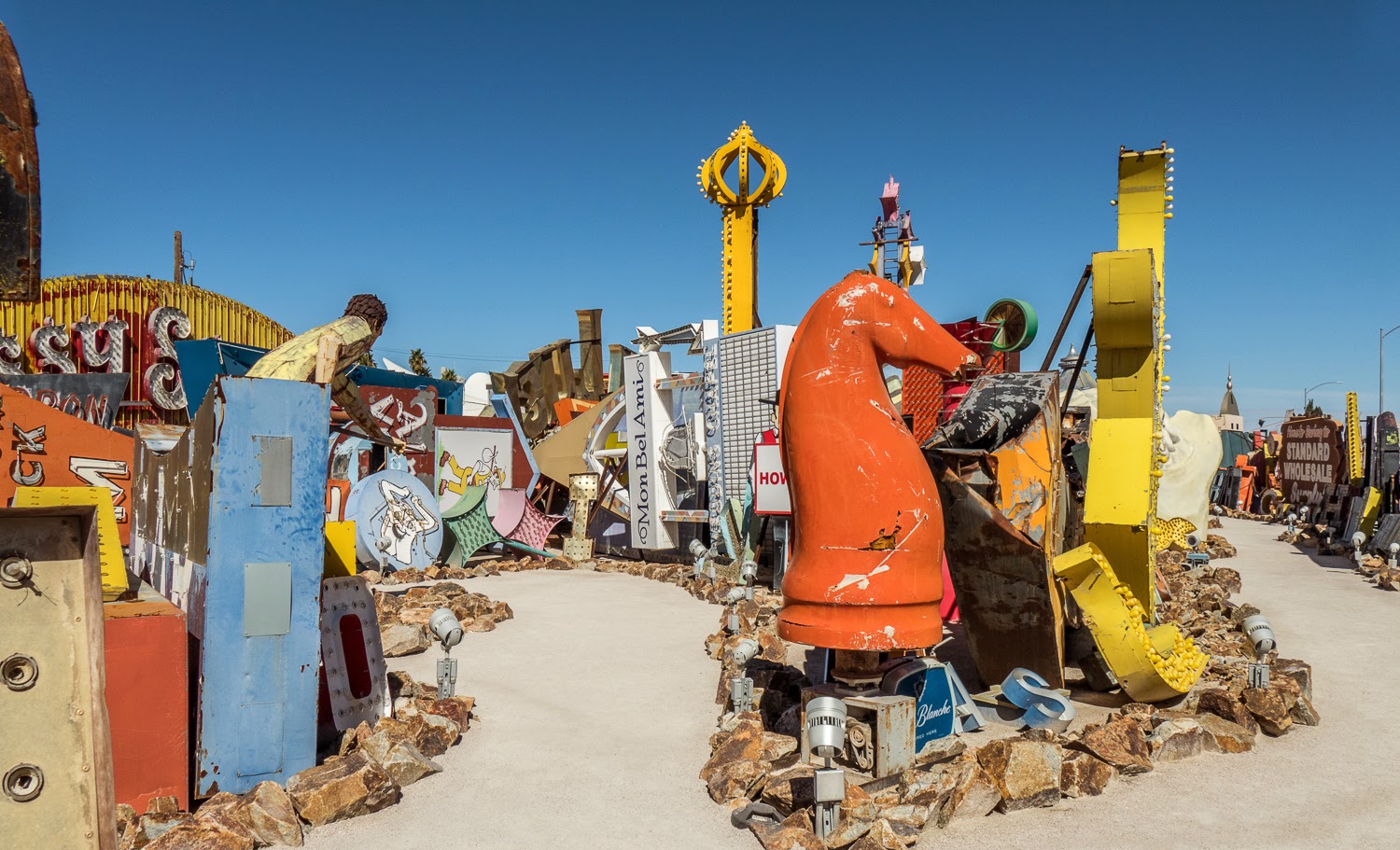 A close-up of a skull from Treasure Island that, according to our guide, can be seen clearly on Google Earth. 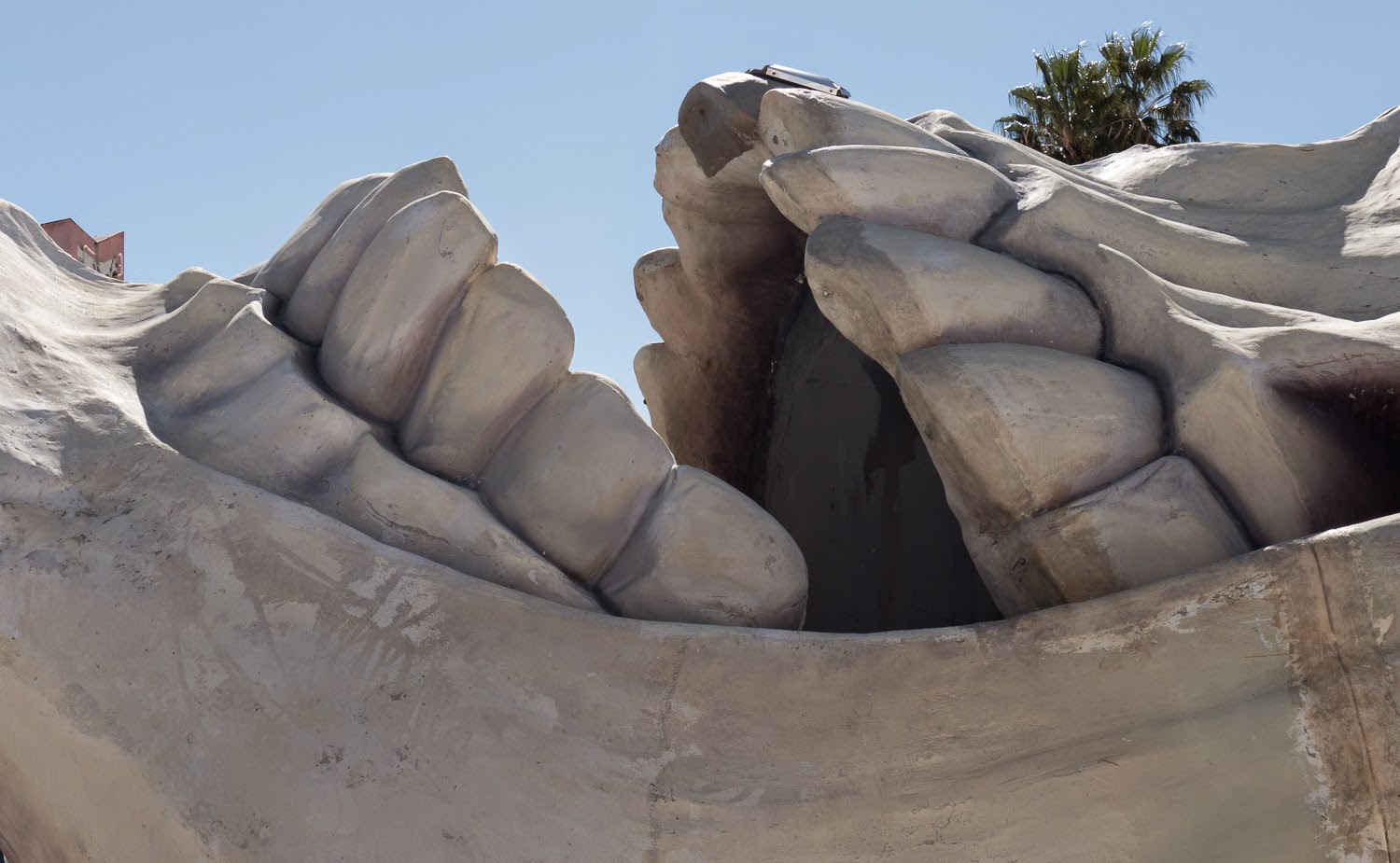 A marvelous exhibit of the Stardust typography and stars behind. 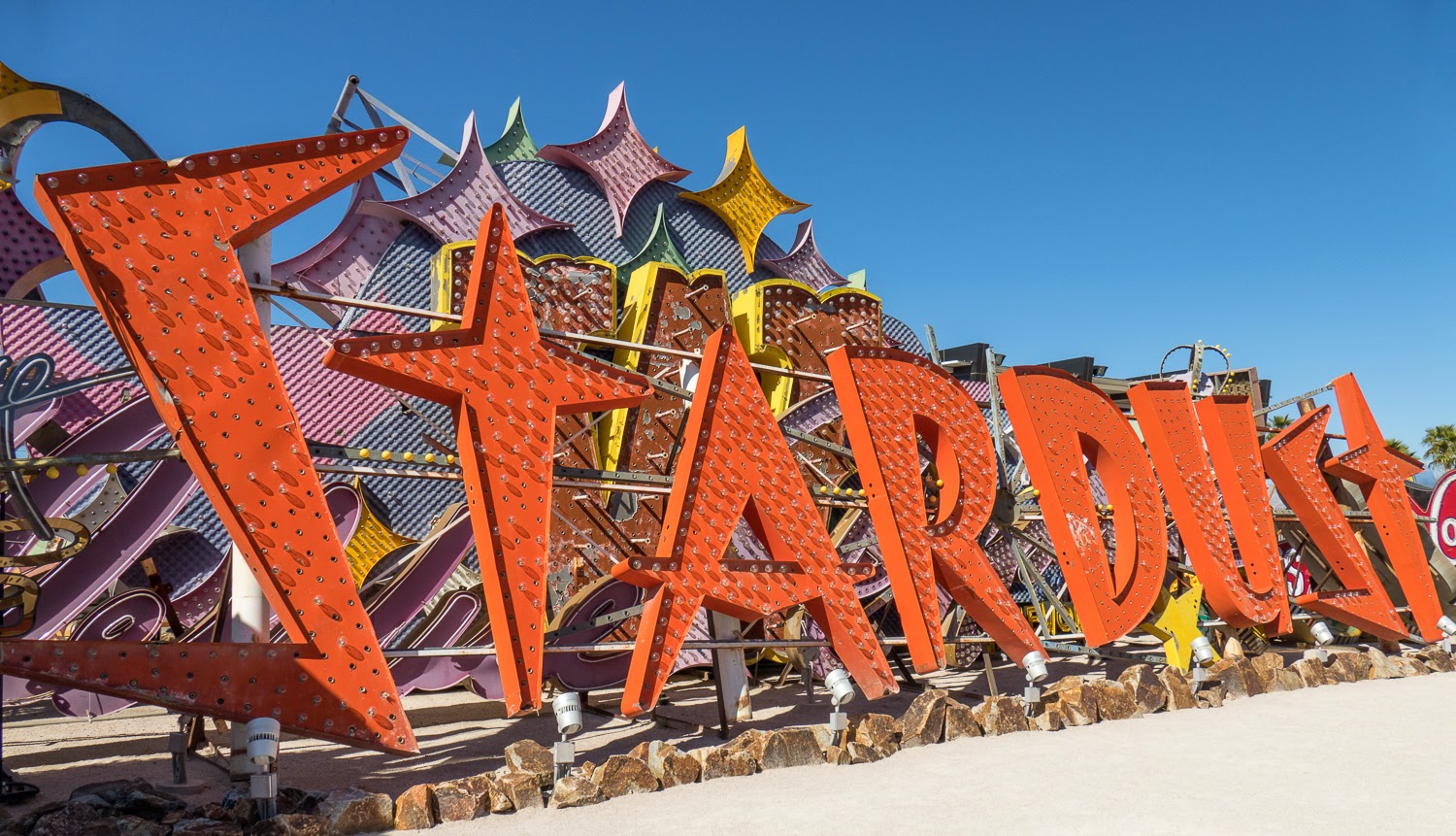 There are a lot of stars. 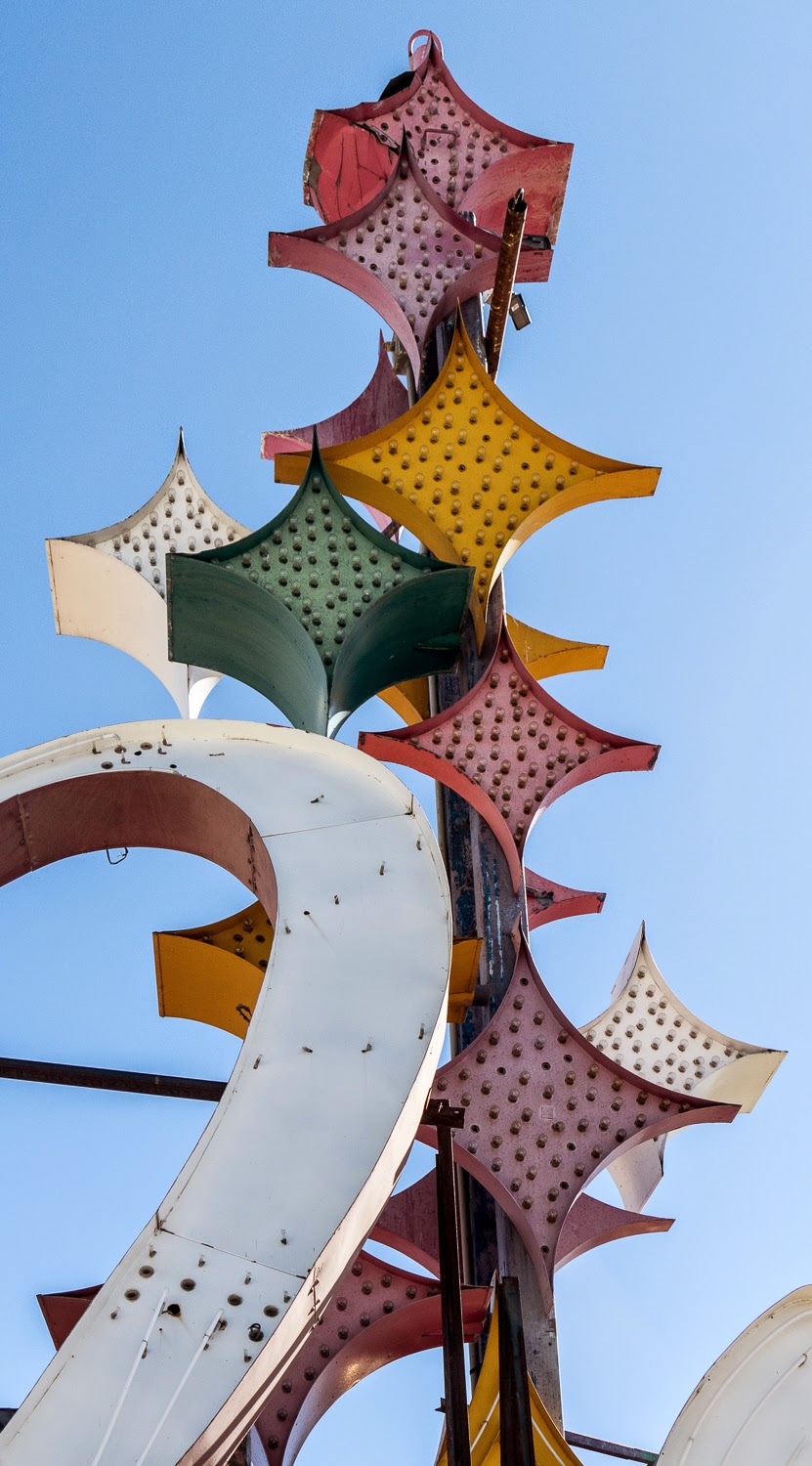 Aladdin's lamp. Silly me, I thought it was a teapot, thinking of the Disney ride with teacups. It's funny how the brain misfires. 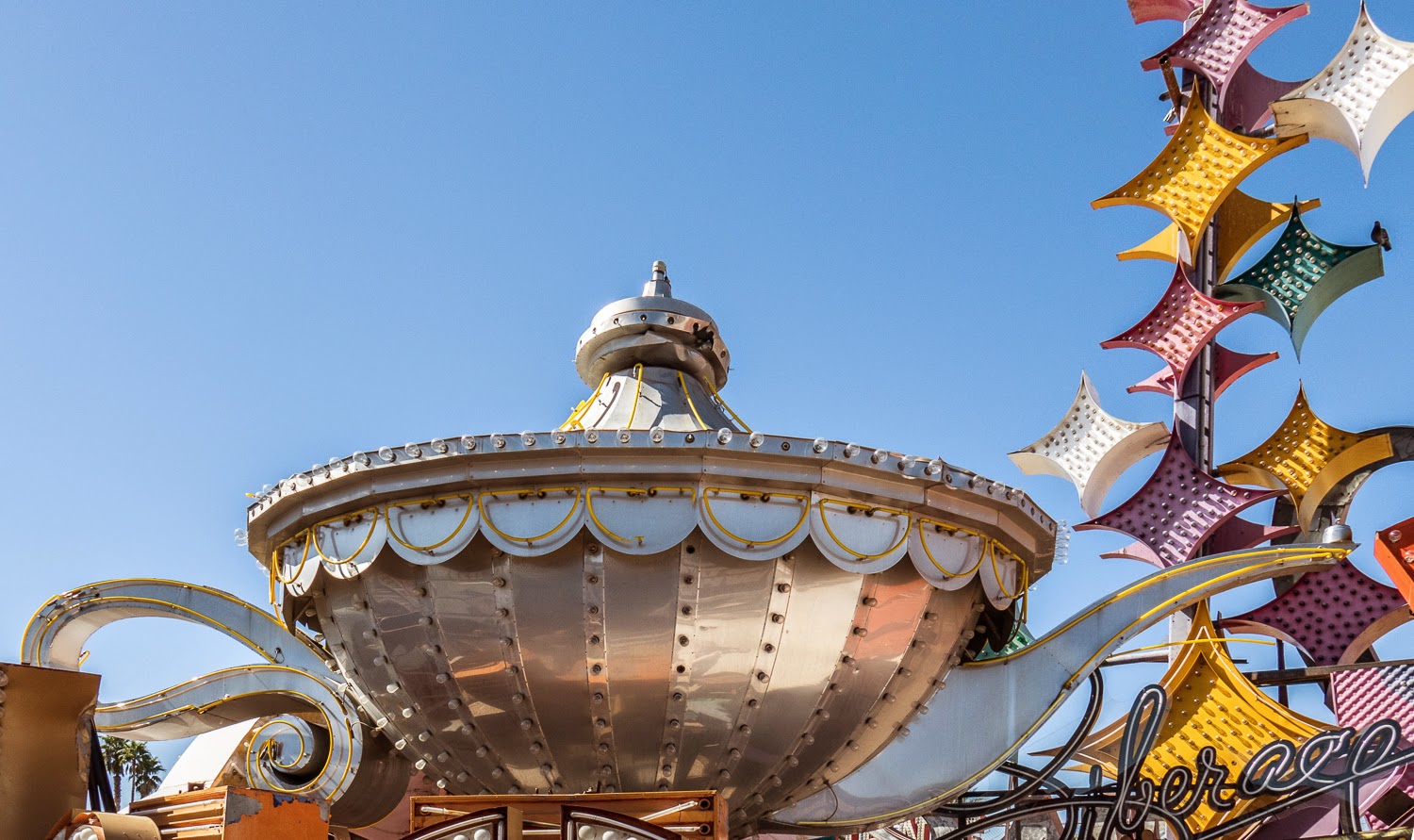 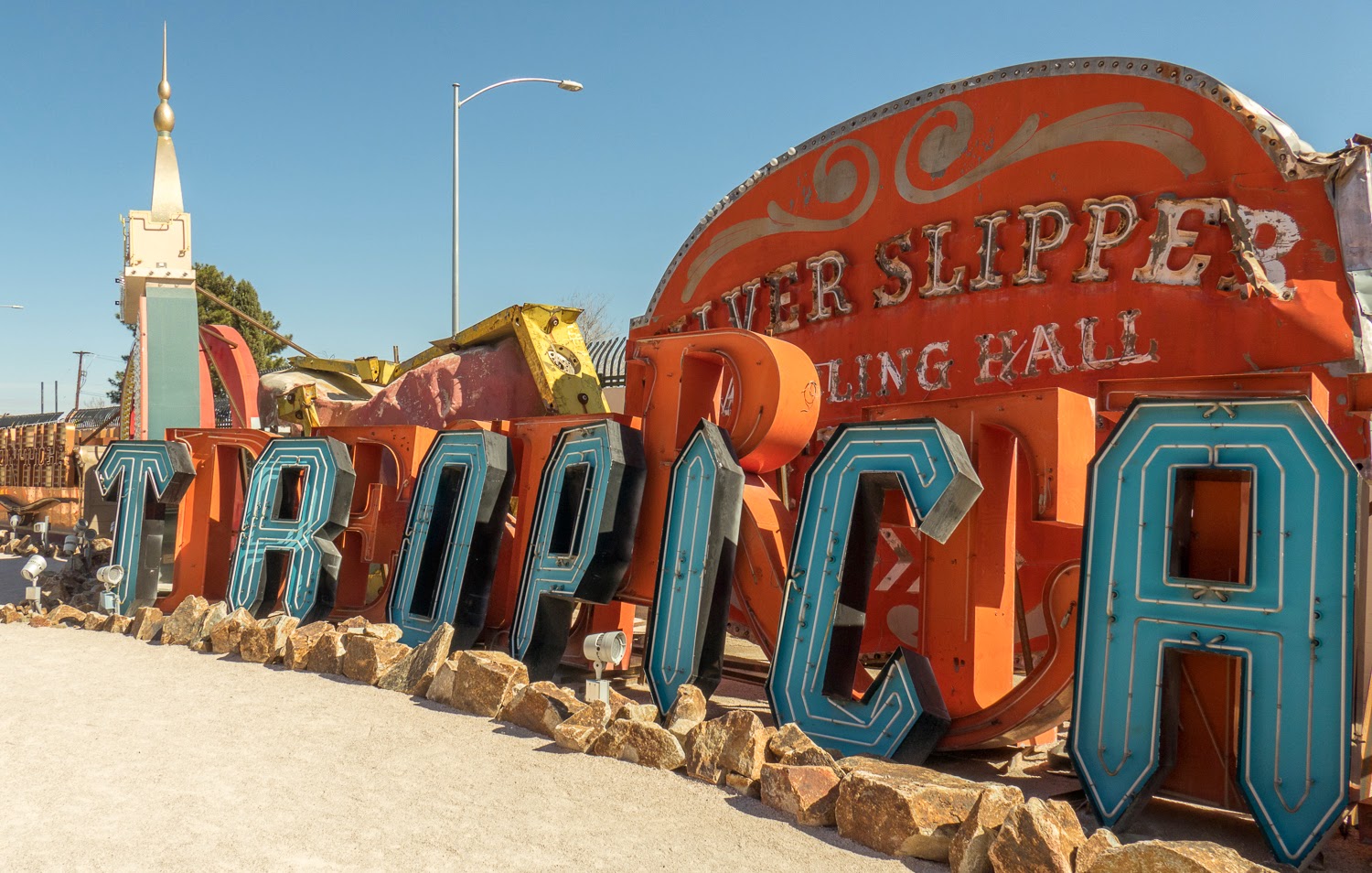 The silver slipper that once rotated in front of the casino now stands motionless across from the visitor center. 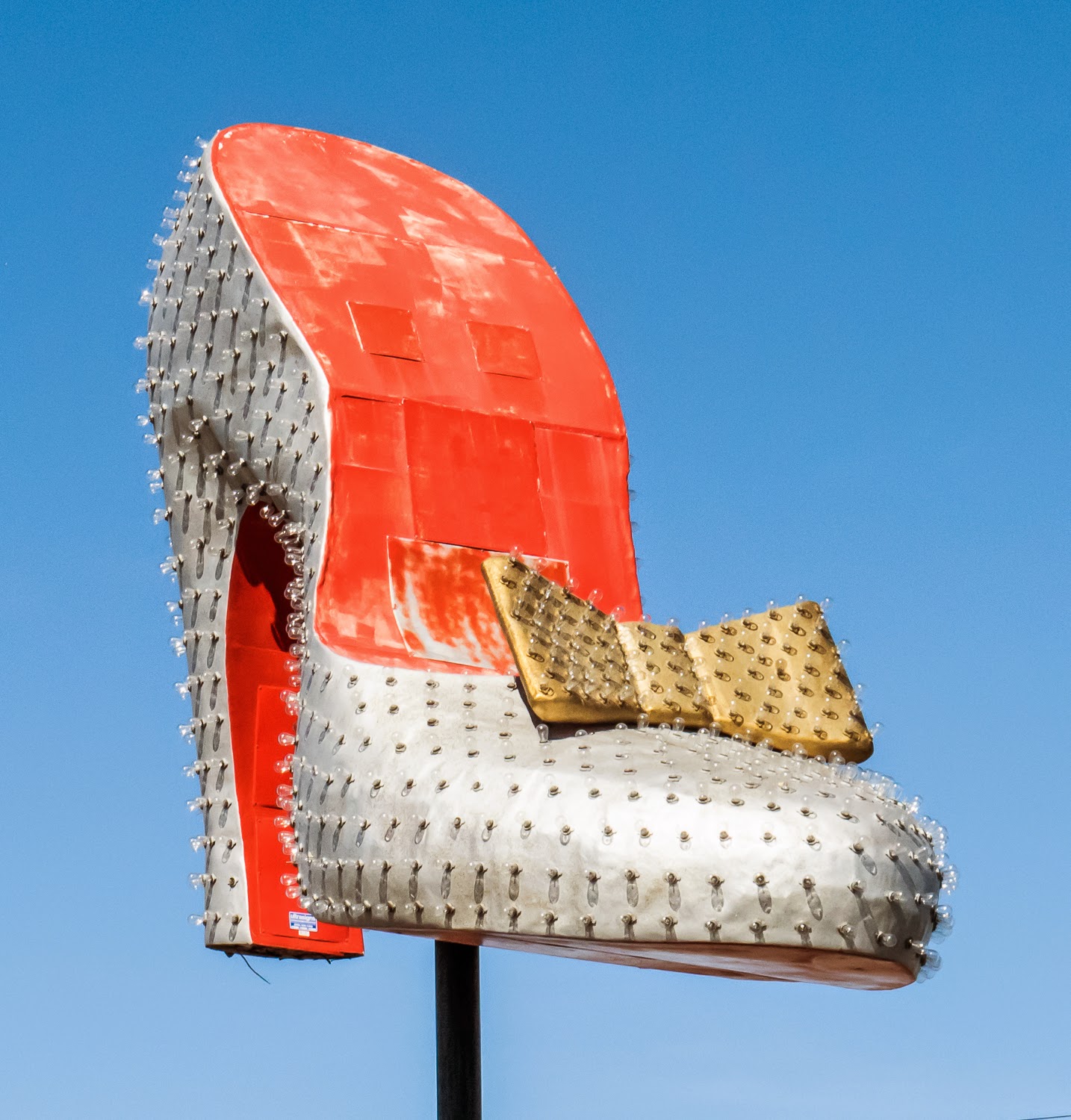 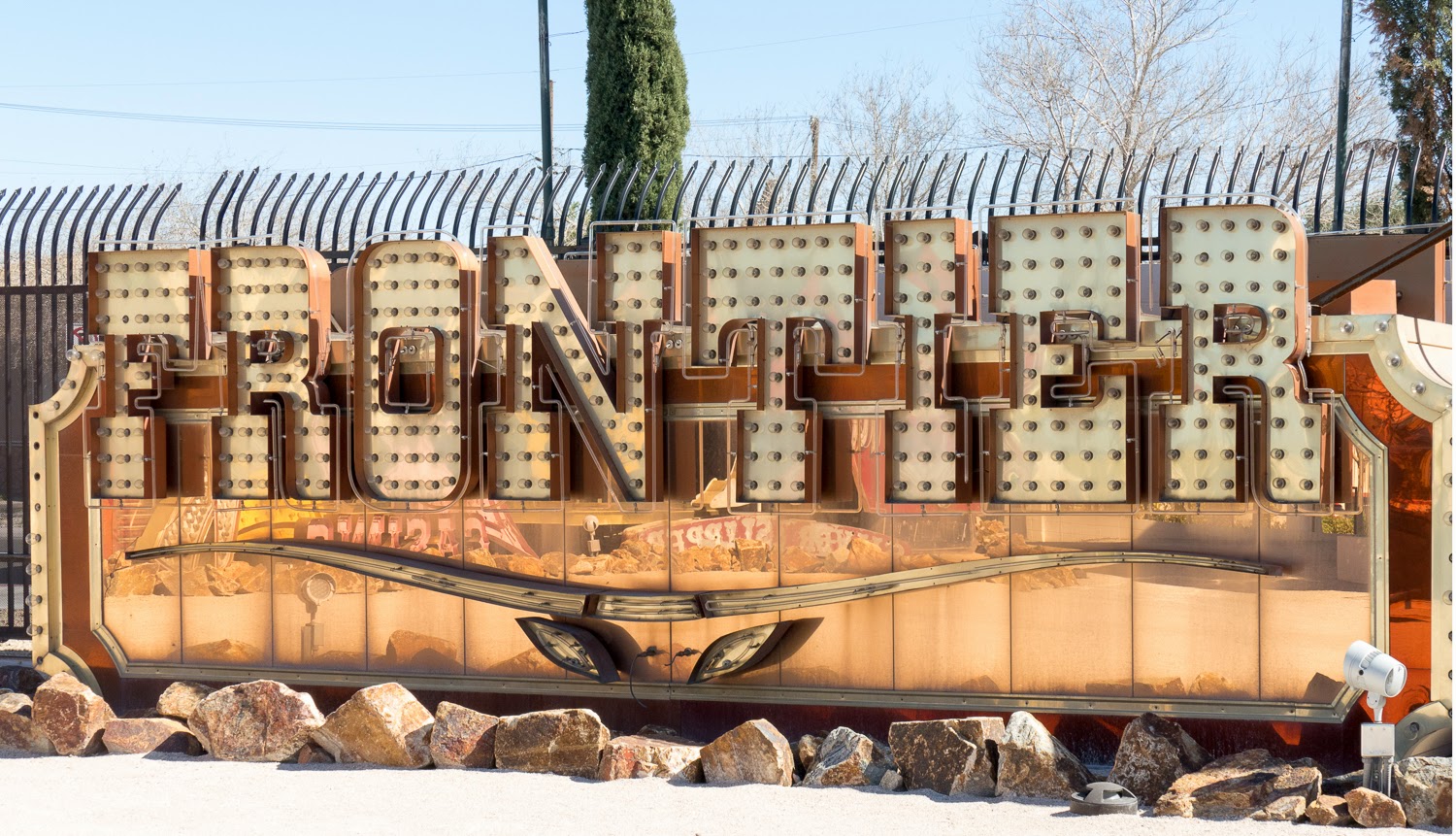 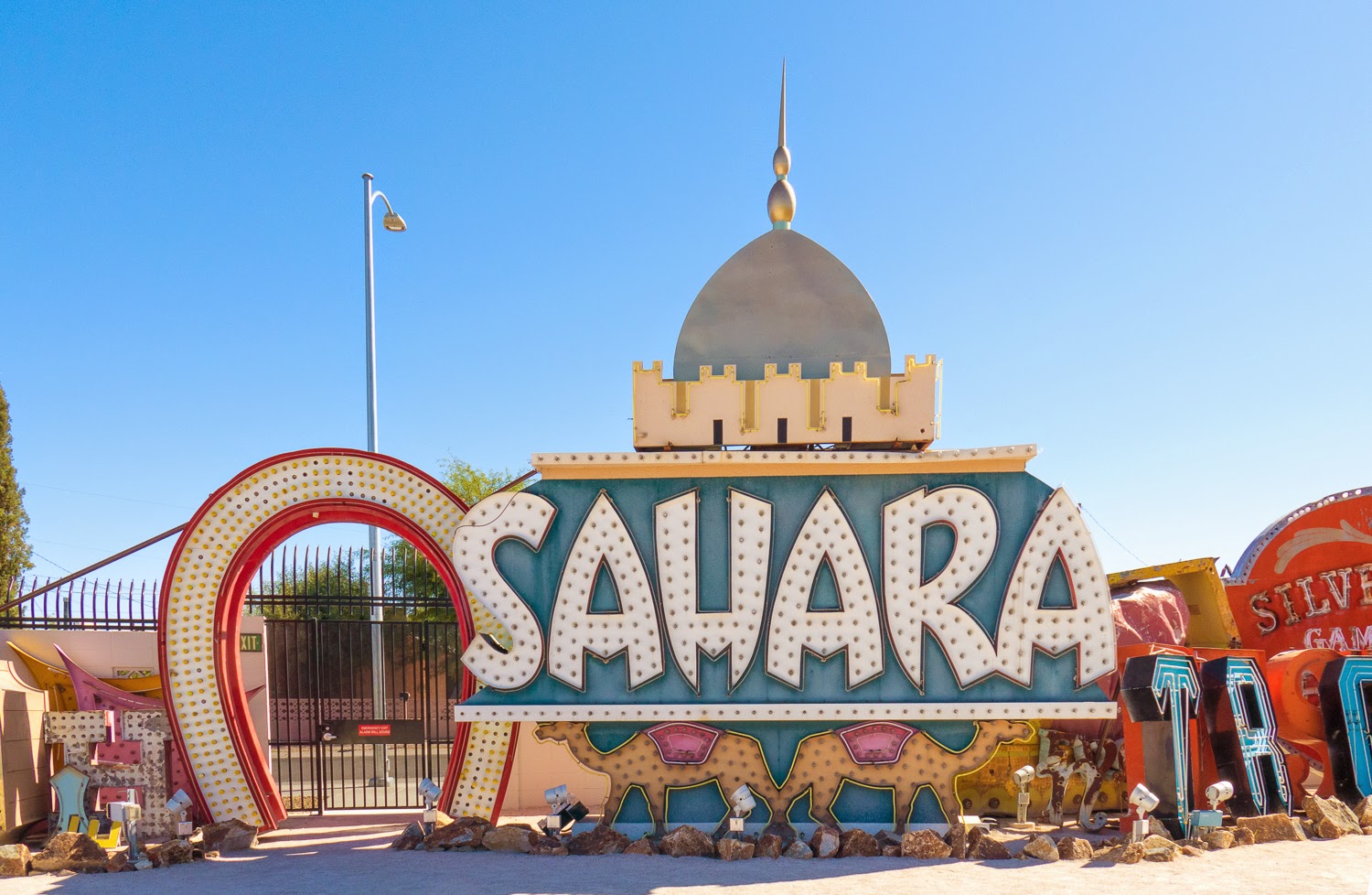 There are signs for casinos, coffee shops, restaurants, and motels, but only one that I know of from a car wash. What's interesting about this one is that it incorporates channeling, a technique that places metal ridges around some of the tubes, making them more distinct when lit. 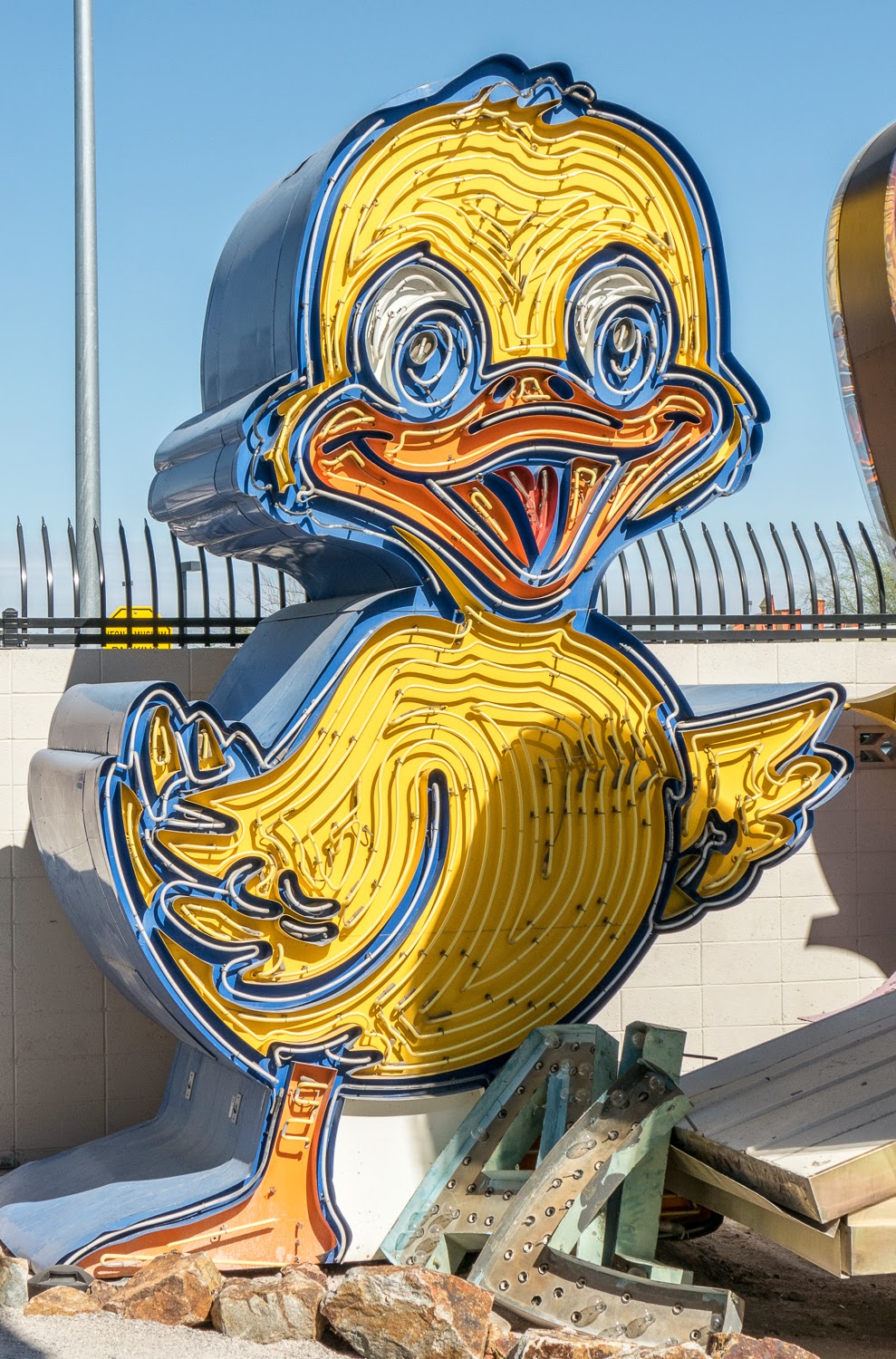 The museum offers a nighttime tour as well, to see the half-dozen signs that illuminate. It's on the pricy side and we didn't go, but did take a drive down the Strip to get to Las Vegas' cathedral so I could take photos of the windows. I'm sure they were gorgeous when the church was built in 1963, but it now stands in the shadow of an overpowering casino. I'm still trying to resurrect their original beauty.
=======